This Video Cleverly Uses LEGO To Explain Torque And Horsepower

Motorcyclists tend to compare horsepower and torque figures for competing models. Most sport-oriented riders prioritize horsepower figures while cruiser fans focus on torque. Regardless of your preference, the spec sheet showdown doesn’t always tell the full story, especially when it comes to the difference between these two measures.

Thankfully, the driving 4 answers YouTube channel felt that the horsepower/torque dichotomy needed a little more clarifying. So, the content creators dug through the toy box for one of the most helpful learning tools at their disposal: LEGO. Using two different LEGO motors, driving 4 answers visually captures the fundamental difference between torque and horsepower.

Of course, we all know that torque is the rotational variant of horsepower’s linear force. What does that really mean, though? The video relates this concept to using a torque wrench on a screw, but the idea is most evident when the YouTuber plugs in the two LEGO motors. The creator can easily stop the axel connected to the motor producing .003 Nm of torque while the .014 Nm motor requires a more concerted effort.

However, unlike torque, horsepower isn’t just a measurement of force, it’s a measurement of force over time. An engineer once told me that torque is how hard a boxer punches and horsepower is how many times they punch. One is tied to time, while the other is independent of it. Driving 4 answers cleverly visualizes that idea by attaching a connector piece to each motor axel.

The demonstration allows us to see that the smaller motor rotates 275 times per minute while the larger motor only completes 146 rotations in the same time. When calculating the torque by the number or revolutions, the larger motor only pumps out twice the amount of horsepower of the smaller motor while it boasts over 4 times the torque figure of its smaller counterpart.

While driving 4 answers compares the two LEGO motors to truck and sports car engines, we can adjust the comparison to cruisers and sportbikes, relatively. Well, compared to the figures produced by each motor, the two motors may be more analogous to the mills found in a Harley-Davidson Softail and a Ninja 400, but at least we know the difference between torque and horsepower now.

The only question left is: do you want the motorcycle with the large LEGO engine or the small LEGO engine?

Growing Up Is Overrated: 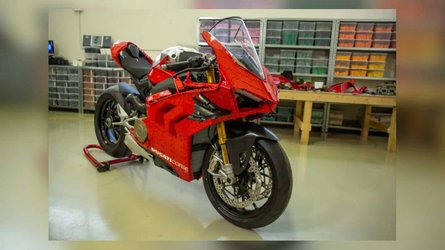 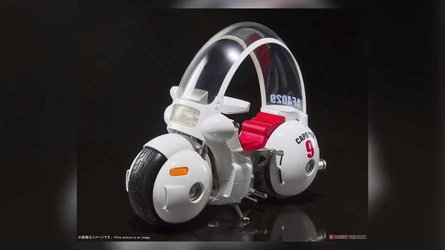 This Dragon Ball Motorcycle Model Takes Us Back To The Future
By: Dustin Wheelen
++
Got a tip for us? Email: tips@rideapart.com