This Hero Karizma ZMR Is Cosplaying As A Suzuki Hayabusa

The attention to detail is pretty impressive.

The Suzuki Hayabusa, whether in its latest trim, or that of the previous generation, is loved by many thanks to its unique styling and bonkers performance—the two things which propelled the superbike into stardom. However, given the bike's rather gargantuan price tag, chances are this bike is far beyond the reach of many motorcycle enthusiasts. So, what do you do when you really, really want a Hayabusa? You make your own, of course!

If it weren't for the title of this story, I'm pretty sure you wouldn't know exactly what this bike is. Surely it isn't a real Hayabusa due to its rather shrunken proportions and rough-around-the-edges bodywork, but hey, you've got to give the builder some credit. Especially given the fact that underneath this Hayabusa is really a Hero Karizma ZMR. As it would turn out, bikes like this Hero'Busa aren't all too uncommon in India. I've already heard of two Hero Karizma's transformed into a Hayabusa lookalike. On top of this, we shared a story of two Bajaj Pulsars disguised as the Japanese Peregrine Falcon.

Now, while mod jobs like this bike are definitely head-turners, the question of legality, especially given India's strict vehicle modification restrictions, remains a major issue. Nonetheless, enthusiasts continue to modify their vehicles in varying degrees, either completely redesigning the bike from the ground up, or in this case, mimicking a legendary machine. This Hero'Busa has been done rather well, that it could easily be mistaken as the real deal from a far.

Upon further scrutiny, however, it's clear to see that there are some glaring differences. For starters, the bike retains the Hero's standard telescopic forks. The brakes are also a lot smaller, with one of the front brake rotors just sitting there, without a caliper. The biggest difference, of course, lies at the heart of the beast. Unlike the Hayabusa's fire-breathing 1300cc engine, this Hero'Busa comes with a 223cc, air-cooled, single-cylinder engine capable of producing a heart-pumping 20 ponies via a five-speed transmission. 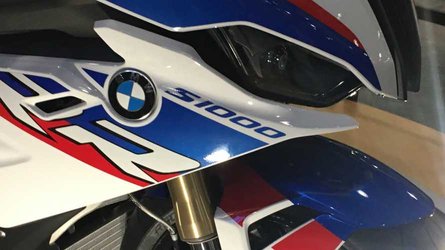 Did This Bike Maker Straight Up Photocopy A BMW S1000RR?
⠀ 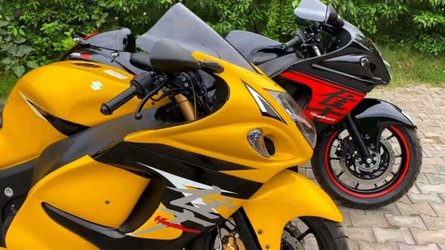