In motorcycling circles, it’s common to hear the platitude “it’s the journey, not the destination.” While the cliché looks good on a Pinterest board and sounds adventurous said aloud, Royal Enfield fans probably feel the same way about the Meteor 350. Teased countless times throughout 2020 and hit with delays throughout the process, the resilient Indian manufacture forged on, unveiling the small-capacity cruiser in November, 2020.

Apparently, the anticipation for the Meteor was at a boiling point as Royal Enfield secured more than 8,000 pre-bookings in less than 10 days. Propped up by the news that the bike will make it American shores, Royal Enfield has been riding a new wave of hype over the past month. Now, the brand is carrying on its momentum by revealing the specs and pricing for the upcoming European model.

While the Meteor 350 is already available in India, the new cruiser is a global model so European customers can expect the same specs. The oil and air-cooled 349cc single still touts a 9.5:1 compression ratio and pumps out 20.2 horsepower at 6,100 rpm. Perhaps more important for cruiser metrics, the little mill is engineered to maximize pull in all conditions and generates 19.9 lb-ft of torque at just 4,000 rpm. Mated to a five-speed gearbox, the engine tucks neatly into a double-cradle steel frame with a 41mm fork up front and dual shocks at the rear.

With a 19-inch front and 17-inch rear wheel, the Meteors seat height comes in at an approachable 765mm (30.1 inches). Bybre calipers clamp down on a 300mm disc up front and a 270mm rotor in the back and two-channel ABS helps avoid lockups at both ends. With the 350 in running order and the 15-liter (4-gallon) gas tank 90-percent full, the Meteor weighs in at 420 pounds, which is quite manageable by cruiser standards.

Royal Enfield will offer the new model in three different trims: Fireball, Stellar, and Supernova. The tiers will all feature the company’s new Tripper navigation pod, offering curated routes by Google maps and turn-by-turn directions. What sets the variants apart is paint and included accessories. For the base Fireball, customers can choose between red and yellow color schemes with blacked out accessories coming standard at €4,099 ($4,965 USD).

The Stellar features chrome finishes on the exhaust and handlebars along with a passenger backrest. Buyers can choose between red, blue, and matte black colorways and the MSRP comes out to €4,189 ($5,074 USD). Building on top of the Stellar, the Supernova keeps the passenger backrest and shiny bars and pipes but adds a premium seat and a windshield. With brown and blue two-tone paint options, the Supernova is the most refined and carries a matching €4,279 ($5,183 USD) price tag.

Of course, Royal Enfield will offer an extensive catalog of 230 accessories to further personalize your baby cruiser. If that isn’t enough branding for you, the company will also offer a full line of Meteor-branded clothing. Meteors will crash land at European dealers in early 2021 and each unit will come with a 3-year, unlimited mile warranty. On top of that, Royal Enfield will offer roadside assistance over that 3-year period. After all, it’s about the journey, not the destination.

Keeping Up With Royalty: 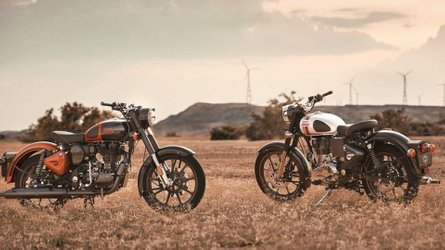 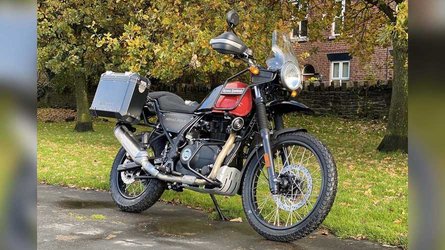