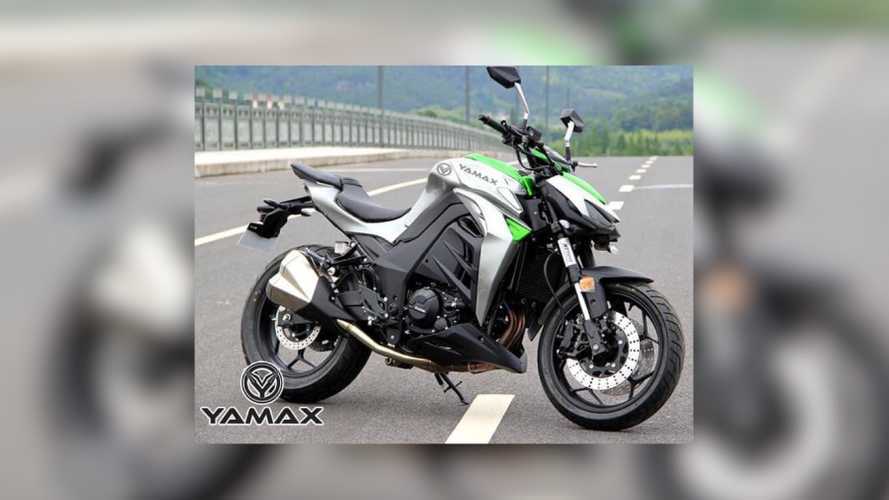 The Kawasaki Z1000 is one of Kawasaki’s more premium offerings, and continues to be a popular choice across several markets. Featuring a 1,043cc inline-four engine, the high performance naked bike churns out a respectable 142 horsepower giving it a top speed well over 150 miles per hour. As such, it’s safe to say that Kawasaki has put in quite a bit of effort to produce a motorcycle of this caliber. Not to mention their aggressive styling dubbed ‘Sugomi’ must have taken their design team countless man hours to perfect. Sugomi, which loosely translates to ‘an intense aura given off by an object of greatness’, was Kawasaki’s design language specifically for the Z1000. Naturally, in order to give off an awe inspiring aura, you’d need to have the goods to back it up—and the Z1000 has just that.

Now I reckon that none of you have heard of the Yamax Z400. Right off the bat, the name itself seems to be a mashup of two of the Japanese big four—with the model name, Z400, being exactly the same as Kawasaki’s beginner naked bike. However, the similarities go well beyond the bike’s namesake. Standing about six feet away from the Yamax Z400, you wouldn’t have any doubts that you were looking at a Kawasaki Z1000. Everything from the bike’s chiseled fuel tank to its angry fascia screams Z1000.

The Yamax Z400’s origins aren’t exactly known either. Posts from Moroccan motorcycle dealership, Universbike Maroc’s Facebook page market the bike as one of their flagship models. Other than that, the bike doesn’t seem to be in circulation in other markets. I wouldn’t be surprised if the Yamax Z400 is indeed a Chinese motorcycle similar to the Moto S450RR, which, let’s just say, took one too many design cues from the BMW S1000RR.

As expected though, the Yamax Z400 lacks the performance of its purebred Japanese counterpart. Featuring a 400cc parallel twin, the Yamax only hits a top speed of just 96 miles per hour. Of course it doesn’t even come close to the Z1000R’s Öhlins suspension and Brembo brakes. Currently marketed as the flagship offering of Moroccan motorcycle dealership, Universbike Maroc, the Yamax Z400 is priced at 38,900 Moroccan Dirhams, which roughly translates to $4,230 USD. In comparison the legit Z400, from Kawasaki that is, comes in at less than $700 more, at $4,999. Would you even consider the Yamax Z400 if you could get your hands on one?

What's With All The Fakes?:

Did This Bike Maker Straight Up Photocopy A BMW S1000RR?
⠀

Watch A Fake Helmet Crack Like An Egg In Testing

Husqvarna Introduces 2021 TE 300i And FE 350 Rockstar Enduros
Triumph Speed Twin Gets A Sharp Look With Custom Rennstall Kit
Is It The End Of The Road For The Aprilia Dorsoduro And Shiver?
The Royal Enfield Meteor 350 Finally Gets A Launch Date
This Yamaha R1-Powered Bond Bug Is Looking For A New Home

Husqvarna Introduces 2021 TE 300i And FE 350 Rockstar Enduros
Triumph Speed Twin Gets A Sharp Look With Custom Rennstall Kit
Is It The End Of The Road For The Aprilia Dorsoduro And Shiver?
The Royal Enfield Meteor 350 Finally Gets A Launch Date
This Yamaha R1-Powered Bond Bug Is Looking For A New Home
Commenting Guidelines