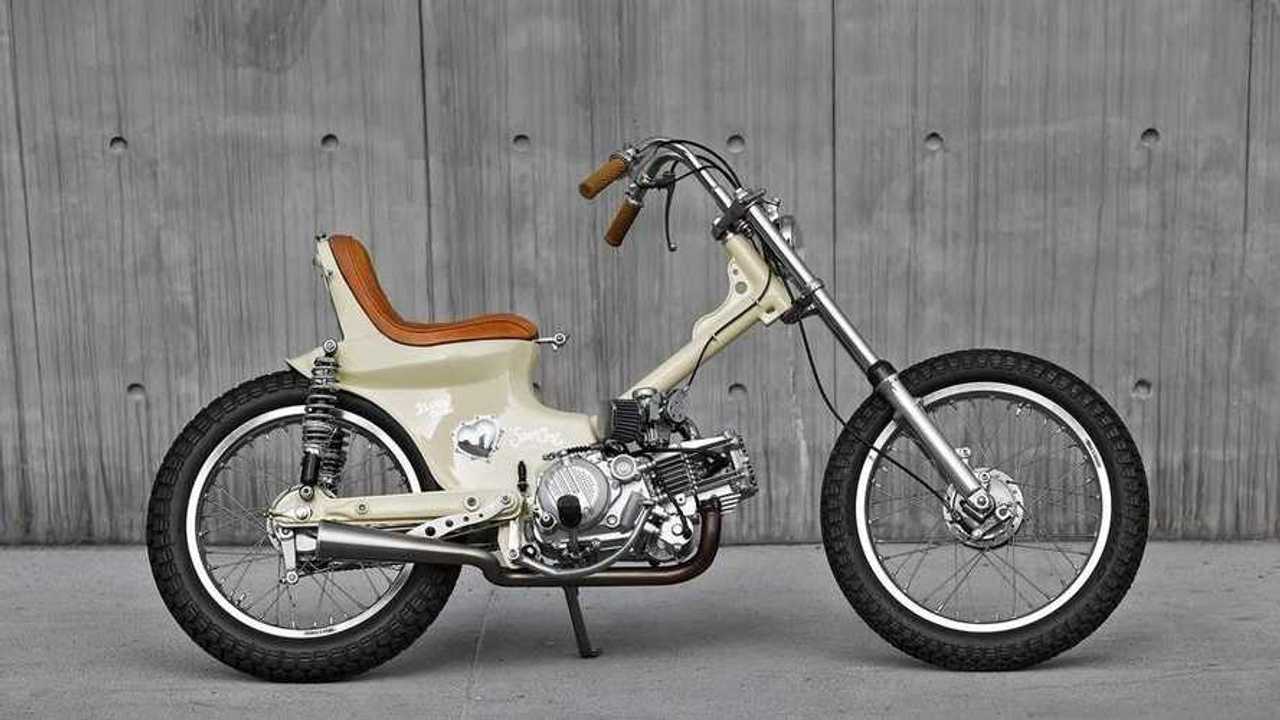 This Super Cub supreme is a dream in cream.

The Honda Super Cub is a practical machine. As the poster child of the company’s You Meet The Nicest People On A Honda campaign, the model became synonymous with commuting and easy-breezy leisure rides. That approachability resulted in record sales and the Super Cub is now the most produced model in motor vehicle history.

When Taipei-based 2Loud Custom got a hold of a SYM produced Super Cub, builders Ma “Max” Yicheng and Lu Yongyu wanted to overcome the cookie-cutter characteristics of the ultra-pragmatic bike. By doing so, the two transformed the Super Cub into one of the most impractical yet stunning examples of a small-displacement bike. Enter the Super Cub Chopper.

The customer’s brief was simple: “Cub plus chopper plus love.” With a penchant for classically-styled motorcycles and the metal-working skills to back it up, Ma and Yongyu were happy to oblige—despite the contradicting styles. Here in America, choppers are associated with cross-country road trips in the Easy Rider vein. To add to the Super Cub Chopper oxymoron, motorcycles aren't permitted on Taiwanese highways.

Regardless of the use case, Ma and Yongyu’s set out to make a one-of-a-kind machine out of the super-conventional Super Cub. Of course, choppers are the most naked of naked bikes, so the pair removed the fairings to highlight the simplistic beauty of the bike’s frame and engine. On the other hand, the OE 90cc four-stroke single didn’t seem like enough power by today’s standards, so the builders swapped in a Zongshen 190cc motor mated to a five-speed transmission.

A motorcycle can’t be considered a proper chopper without a long fork and bunny-ear handlebars and 2Loud delivers in spades. The front end was donated from a Hartford HD200 and the custom handlebars capture the minimalistic yet sketchy chopper aesthetic with bare-bones hand controls. In the rear, shorter dual shocks lower the fender to hug the 17-inch wire-spoked wheel and tire while the 18-inch front meets the breeze head-on.

Like any 2Loud build, attention to detail is of the utmost priority. The custom one-piece seat and rear fender is evidence of the duo’s skill and craftsmanship. Atop the beautifully-shaped seat pan, Ma and Yongyu mounted a diamond-stitched caramel leather seat complete with a sissy bar-esque backrest. Small touches like the matching diamond-patterned grips and drum brakes only add to the meticulous quality of the build while capturing the “all show, no go” nature of choppers.

Last but never least, love wins out with large metal heart cutouts at the tail section and side panel. Endlessly associated with the hippie movement of the ‘60s, it’s only fitting that the Super Cub gets its dose of love given the direction of the build and the customer’s instructions. 2Loud’s Super Cub Chopper proves that you not only meet some of the nicest people on a Honda but you can also meet some of the coolest.

It's Not A Motorcycle, Baby, It's a Chopper:

This Modified Honda Super Cub Is Completely Out Of This World
⠀

This David Mann Replica Triumph Is Being Raffled For Charity