All Aboard: This Steam-Powered Bike Is A Real "Loco" Motive

René van Tuil of Revatu Customs, is no stranger to building wild custom bikes. Just one look at his gallery—with bikes like his Revatu Diesel, powered by a 600cc marine diesel engine—will tell you that. Still, even van Tuil admits that this is his wildest creation so far. 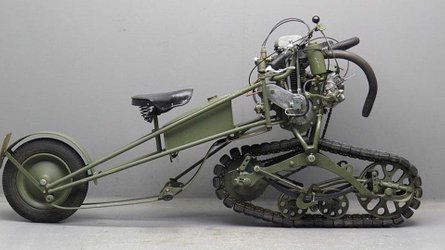 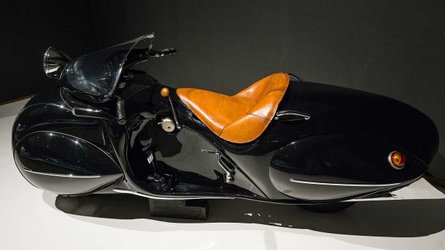 “Often when interesting mechanisms are used, designers are paid to cover them with swoopy and aerodynamic looking fairings or covers. I wanted to bring back the idea of visible raw mechanics and put it into something that we can all relate to.” Said Higgins.

He spent eight months in the garage and ended up with a working steam-powered motorcycle which he named the “Black Pearl”, after Jack Sparrow’s infamous pirate ship. He later unveiled his creation at the Bigtwin Bike Show in Rosmalen, Holland.

The Black Pearl is a throwback to the days when steam ran the world and not only looks, but functions just like a steam-driven locomotive. A coal fire heats water from the massive tank to create steam, which then operates a piston connected to an exposed crankshaft connected to the rear wheel’s eccentric pivot. Of course, what is a train without the iconic brass bell and working steam whistle?

The handlebars and front fork might look somewhat more familiar to motorcycle fans. Still, with their raw, industrial look they evoke images of a time before the invention of the modern internal-combustion engine and don’t detract from the effect at all.

With a top speed of only 5mph, we probably won’t see steam-powered bikes traveling the roads any time soon. Although one does wonder if some sort of gearbox could be contrived to harness all that raw steam power.

Considering Van Tuil’s raw creativity and ability to turn his ideas into reality, we can’t wait to see what he comes up with next.