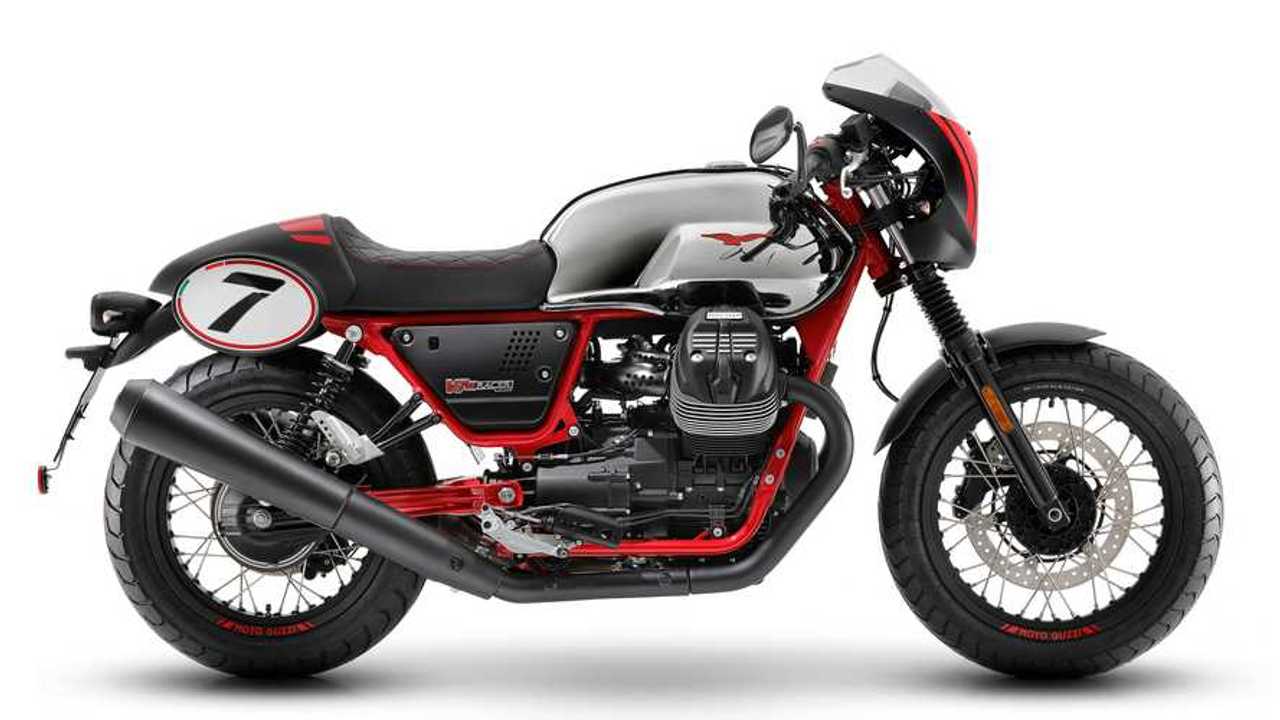 The iconic Italian motorcycle brand Moto Guzzi has introduced yet another iteration of its naked roadster, the V7. This V7 III Racer 10th Anniversary edition has received the cafe treatment: a small front fairing with a windscreen and a flat-track race-inspired number plate emblazoned with a “7” set this V7 apart from the eight other available editions. It has a whole host of other fancied-up parts, though, that you might not notice on first glance.

Guzzi Is Killing It:

In a step away from its closest sibling, the V7 III Racer LE, the Anniversary edition sports a very sharp dark chromed gas tank. The rest of it, instead of also getting the chrome treatment, is mostly blacked-out, except for its red accents. Half its swingarm is also done up in red, and that color is highlighted through a stripe on the cafe fairing and accents on the passenger seat cowl.

Each bike will be numbered and you’ll find subtle “10th Anniversary” banner details throughout the bike. Additionally, the manufacturer fully upgraded the bike’s lighting to LED: its headlight, taillight and all signals have received the modernized treatment. Foregoing bar-mounted stalk mirrors, these versions sport bar-end mirrors to enhance the cafe look, and instead of painted parts, you’ll find black anodized billet aluminum parts all over this bike, from the top triple to the fancy footpegs.

It shares a powerplant with the rest of its V7 III siblings: Guzzi’s signature transverse-mounted V-twin engine with a 744cc displacement, putting out 52hp and 44.2 ft-lbs of torque. Power is pushed to the 17” rear spoked wheel through a 6-speed transmission and a shaft final drive. Curb weight comes in at 470lbs for the LE, but the lightened Anniversary might drop some of those with its anodized billet parts where its siblings have painted steel.

Moto Guzzi seems to be taking a cue from Triumph here, which has recast three of its own models into high-end “factory custom” editions. It seems to be working out very well for the British maker, so why not fancy up an already-successful naked Italian? That chrome tank alone has my interest piqued. Guzzi has not released the retail pricing for this motorcycle yet. The V7 III Racer LE sells in the US for $9,990; with its fancier parts I’ll wager a guess that we’ll see the Anniversary Edition V7 III for something in the neighborhood of $13,000.

FROM THE FUEL TANK TO THE RACING NUMBER PLATES, IT HAS NUMEROUS FEATURES REMINISCENT OF THE PREVIOUS VERSIONS OF THE UNMISTAKEABLE CAFÉ RACER FROM MANDELLO

Moto Guzzi V7 Racer has always been the ambassador of the V7 range with the sportiest spirit. Born in 2010, evolved in 2015 with the arrival of the V7 II Racer and in 2017 with the birth of the third generation, in 2020, the Moto Guzzi V7 III Racer reinvents itself once again, and it obviously does it in accordance with tradition, while celebrating its tenth anniversary.

The new Moto Guzzi V7 III Racer 10th Anniversary differs clearly from the previous version in the front view, where a new top fairing with incorporated windscreen stands out, sleek and sporty, following the dictates of the most authentic Café Racer style. The top fairing is enhanced by a special red dedicated graphic - also picked up on the saddle cover hump - which flaunts the “10th Anniversary” celebratory detail.

At the center of the top fairing is the new, full LED headlight, just as the taillight and turn indicators are also LED. A modern and dynamic look also emphasized by a thinner and sleeker rear mudguard, and by brand new “bar end” rear view mirrors.

There are numerous stylistic features reminiscent of the previous versions of the Café Racer from Mandello, all tributes to its ten-year heritage: The fuel tank, wrapped on the top by the classic leather strap, it returns to the beautiful glossy chrome that characterized the original 2010 model, whereas other distinctive V7 Racer and V7 II Racer traits reappear on the side racing number plates, namely the number 7 and the red edge with the detail of the Italian flag.

As for the rest, Moto Guzzi V7 III Racer 10th Anniversary maintains unaltered the fundamental characteristics of a model that has by now become iconic, such as the frame and the swingarm painted in color “Rosso Corsa” (Racing Red), an explicit reference to the 1971 V7 Sport, nicknamed, in fact, “telaio rosso” (red frame); the semi-handlebars, the splendid, humped saddle, now enhanced with red stitching, that has a single-seat look but is approved for two-up riding as well: in fact, it has pillion foot pegs, whereas the seat cover can be easily removed when necessary. The spoked wheel rims have black channels and red Moto Guzzi stickers like the other sport models from the Eagle Brand, including the Audace muscle bike.

Produced as always in a numbered edition, as indicated by the plate located on the upper steering yoke, V7 III Racer 10th Anniversary is not only the most sporty of the range, but also the one with the most prestigious parts, that once again demonstrate Moto Guzzi's ability to create true custom models. These include the set-back footpegs machined from solid billet, the lightened steering stem and the steering yoke guard. One of the features worth a mention is the widespread use of anodized black aluminum. This hand-crafted treatment, which requires superb artisan skill, characterizes the side fairings and the throttle body guards.

The V7 III Racer 10th Anniversary, like the new Moto Guzzi V7 III Stone S, is also shod with new Dunlop Arrowmax Streetsmart tires, higher performance, so you can fully enjoy the dynamic qualities of the Café Racer from Mandello.