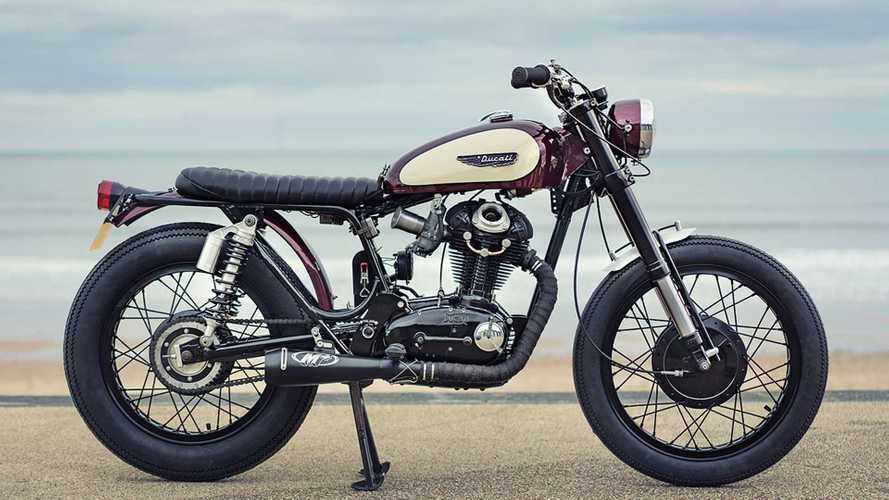 I swear BikeEXIF could make any bike look super tasty.

I’ll say it out loud: I love scramblers. Love them. I don’t own one yet and I might never, but just like the 1:18 model of an MH900e that lives on my desk, I can absolutely appreciate the aesthetic and a bit of longing without having one to ride. Here’s another reason I also love BikeEXIF: they take stunning pictures of gorgeous, mostly custom motorcycles that I could probably never own even if I wanted to. But I can enjoy the pictures, and you can too.

November Customs is a husband and wife team (relationship goals, everybody) who create amazing pieces of machinery as art. Their latest rescue is a 1974 Ducati Scrambler 350 which, in a scenario unfamiliar to very few of us with Multiple Bike Disorder, sat in the back of their shed for a few years before they got the “round ‘tuit” to work on it. Apparently after they began, the project only took a couple of months, even though project creep meant a simple refurb turned into more of a restoration.

At first glance it’s obvious they’ve straightened out the frame under the seat and bobbed the rear fender. On closer look, though, you’ll see they wrapped the original exhaust header and an aftermarket muffler out back. They refinished the engine. They replaced the seat pan and put a beautifully upholstered leather seat on.

The bike has of course new rear shocks, and a KTM front end fitted with the original wheels, along with the cutest little fender I’ve ever seen.

The real head-turner, though, comes with the bevel drive window. Because there is no tachometer on this rebuild, they were able to drill out the bevel and capture a Perspex acrylic window under an aluminum ring. It’s a glorious reference to the 900cc Ducatis with “gear gazers” which pull the gearheads out of any crowd to stare longingly into the guts of the bike. My god, it’s full of stars.

While BikeEXIF has the glamour shots of the bike all shiny and completed, you can see the build progress on November Customs, along with some, if you’re like me, mildly-queasy shots of the bevel drive case surgery. That moment where there’s no going back? Yeah, that’s the one.