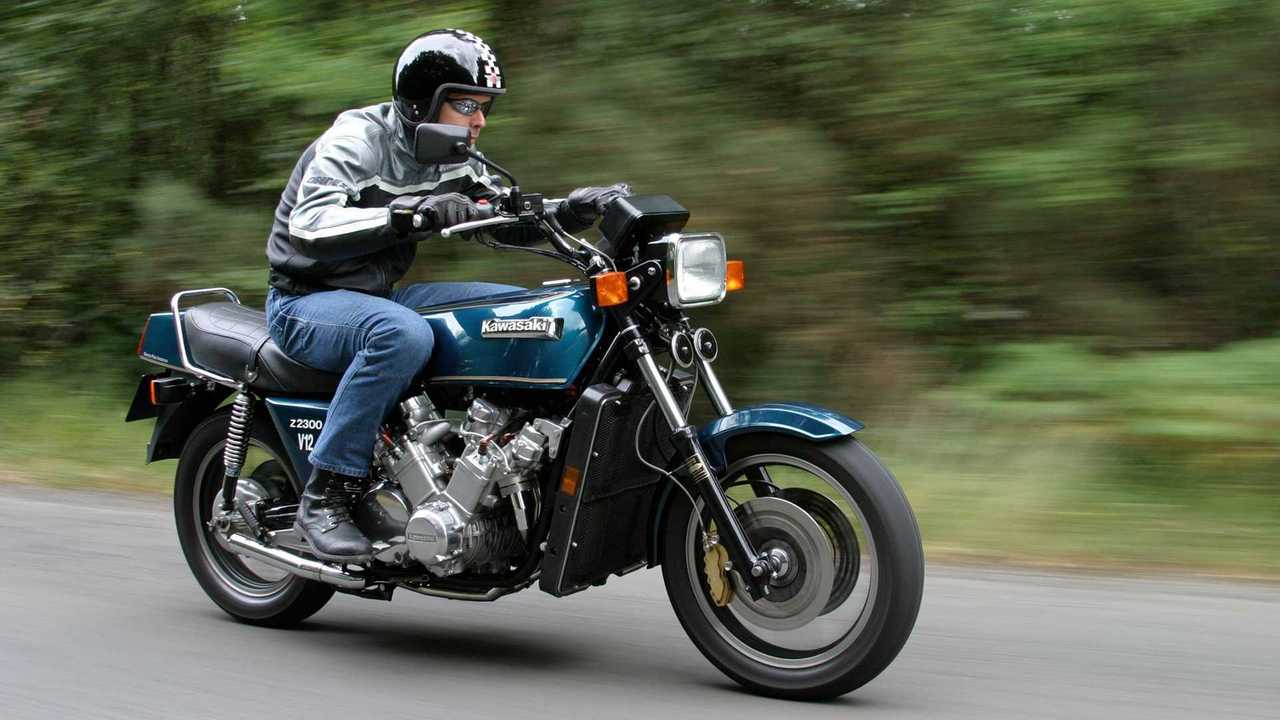 Look on his works, ye mighty, and despair!

Allen Millyard is a man of particular vision. A nuclear engineer and literal rocket surgeon from Berkshire, United Kingdom, Millyard has made it his life's work to build the craziest, most amazing custom motorcycles possible. He does this by shoving as many pistons as possible into bike engines using only maths, hand tools, and whatever plans are scrawled on the inside of his head. He also seems to like all the best things in life—triples, two-strokes, old Kawasakis, old Yamahas, wrenching, going really really fast, etc. He is, in a word, my kinda guy.

So, what exactly do I mean by "shoving as many pistons as possible into bike engines"? Well, he makes singles into V-twins, triples into five-cylinders or V6s, and inline-fours into V8s. He also does ridiculous things like make 5-liter V-twins (seriously) and stuff V10 Viper engines into custom frames just to see how fast they'll go. He's clearly a mad scientist, but one who was never laughed out of The Academy and is backed up by actual scientific and engineering know-how.

I'm telling you this so I can tell you about one of my favorite of Millyard's Frankenbikes—the KZ2300 V12. Yes, 2300. As in 2300 cubic centimeters of Anglo-Japanese fury. Apparently, the big Kawasaki straight six just wasn't big enough for Millyard so he went back in the shed, got out his calipers and files and, well, just look at it! Gorgeous, right? The build is so clean, and looking at it next to a stock KZ1300 you'd be hard-pressed to see anything out of the ordinary until your brain finally processed what you were looking at.

The custom, homebrewed V12 started as assorted KZ1300 parts which he cut up, turned around, drilled, tapped, and massaged into place. It took a heap of work to get it just right, especially since the donor engines weren't internally symmetrical and largely didn't lend themselves to being modified in such a radical way.

"The original cylinders are only five degrees from vertical," Millyard told Motorcyclist. "But I wanted to make this engine symmetrical, so I set both banks at 35 degrees from vertical to give a 70-degree V-12. The rear head is cut and reversed and runs backward, but this caused a nightmare because the KZ1300 cams and sprockets aren't in the middle of the engine, as they are on the KZ1000. The stud positions are slightly different and the cams are offset. So I had to cut away all the water passages and oil galleries, then remake them, plus the cam-chain tensioner and new cam runs. I made a cam chain from two heavy-duty Hyvo chains welded together. It's about six feet long, taller than me!"

The biggest problem Millyard ran into was figuring out how to get the pistons and crank to all work together. Eventually, he came up with an idea inspired by rotary aircraft engines. Each piston in the front bank is mounted to a master connecting rod while the pistons in the rear bank are mounted to smaller, secondary rods connected to the mains. The master rods are all connected to a single crankshaft.

"That was the only drawing I did on the whole bike, using cardboard templates," said Millyard. "The con-rods were the hardest part of the engine. Everything's so narrow and there's very little bearing area, so I had to use the strongest material I could, I had to buy five-inch-diameter round bars (of chrome-moly steel), then machine a 20mm thick plate out of the center, so 90 percent was wasted. I couldn't cut it with a saw, and it would have taken months on my old milling machine. But luckily my friend Chris Halliday of Pretech (who supplied the bike's brakes) offered to do the rods on his CNC machine."

Madness. Other mods include a custom frame made out of a cut, stretched, and enlarged K1300 Voyager frame, a stretched fuel tank, new Pretech six-piston front brakes, late-model Voyager fuel injection with modifications that allow for tuning the system on the fly, phosphor-bronze bushings in the engine, an improved oiling system, modernized suspension, and a whole lot of other bits and bobs to make this monster live-with-able.

The final product is a 770-pound (yikes!), nearly 250-horsepower Frankenbike that eats rear tires like crazy and looks like it was built by Kawasaki itself. The workmanship on the KZ2300 is exquisite, and the only thing I hate about this bike is that it doesn't live in my garage. Also, it makes a gorgeous noise.

Millyard's KZ2300 is currently (I believe) on display at the Barber Museum, so if you're in the area you should check it out. Also, if you're interested (believe me, you're interested) check out Allen Millyard's Facebook and YouTube accounts to keep up with all his techno-wizardry. You'll be glad you did.