This Guy And His Dad Built Their Own Walking Dead Motorcycle

Unfortunately, it does not come with Daryl Dixon's crossbow.

We've covered the zombie apocalypse motorcycle that The Walking Dead's Daryl Dixon rides before—both of them, actually, since the studio needed a pair. It seems that a Dutch superfan has built his own replica of this bike based on Classified Moto's original design. 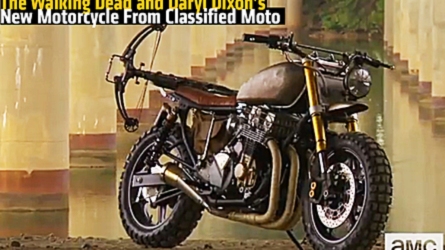 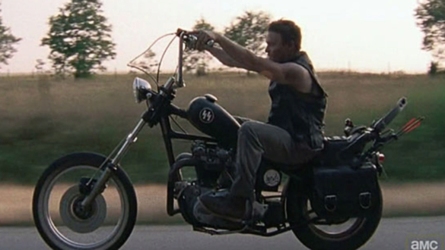 Like the show bike. this one is based on a Honda CB750 Nighthawk. Owner Huub Langedijk gave it a full teardown and rebuild, with the help of his dad, on its way to becoming a Walking Dead replica. It has the same color scheme including the patina on the swapped Yamaha XS650 gas tank, recreated using a mixture of beer and salt. It also has inverted sportbike forks, likely from a Yamaha R6 like the show bike, aftermarket shocks, and chunky dirt tires.

The rear portion of the frame has been stretched and bent, including the special rack for Daryl to carry his crossbow after taking out zombies. Langedijk also created a base for the new seat, which he sent out to get upholstered. The same upholsterer also recreated the bag that sits inside the frame under the seat. This actually hides the battery and wiring, which aren't visible on the show bike. Presumably, in the world of The Walking Dead, the bike has been modified to kick start instead, which makes sense since batteries would be hard to come by in the apocalypse. In real life, the electric start was retained for ease and reliability.

The custom intake is actually a genuine part from Classified Moto, the builders of the original Walking Dead bike. The exhaust is custom as well and has the aggressive tone of a Japanese four-cylinder. It has the same offset headlight as Daryl's bike, but there's an LED tail light behind the crossbow rack rather than the single bullet tail light from the show. The light bar would interfere with actually placing Daryl's crossbow on the rack, but is likely necessary to be legal to ride on Dutch streets. It's not like Daryl has to concern himself with such things in the zombie apocalypse.

This is Langedijk's first custom build, and he learned a great deal in the process. This may not be his last build, either. He's interested in building some kind of bobber, or perhaps the motorcycle from X-Men.