What do you get when you cross Yamaha engineering and Ford marketing? You get one of the best factory-built sleepers ever produced—The Taurus SHO.

That Time Yamaha Built a Ford Engine and Changed the World

The Ford Taurus SHO was a crazy-fast sport sedan in its day, but how much do you really know about the Yamahammer V6 under the hood?

We interrupt your regularly scheduled motorcycle programming to talk about cars. Actually, I’m keen to discuss just one car, and before you start bashing out hateful comments about this being a motorcycle website, know that the car in question has a motorcycle engine. Sort-of anyway—it was built by Yamaha for Ford in the 1980s, and anyone used to wrenching on DOHC Japanese bikes would be right at home popping out shims and adjusting lash on its bucket tappet valvetrain.

Yes, I’m going to take you on a trip down memory lane to reminisce about the Ford Taurus SHO and its epic Yamaha V6. If that’s not enough, I’ll also explain how this engine almost took Ferrari to school back in the day. Seriously? Yeah, seriously.

I’ve owned and maintained no less than 11 (yes, 11) Tauri fitted with this engine, so I may be a bit biased. Actually, one of those cars was a one-off SHO-swapped Sable wagon that was amazeballs, so really it’s 10 Fords and a single Mercury. That’s not the point, though. 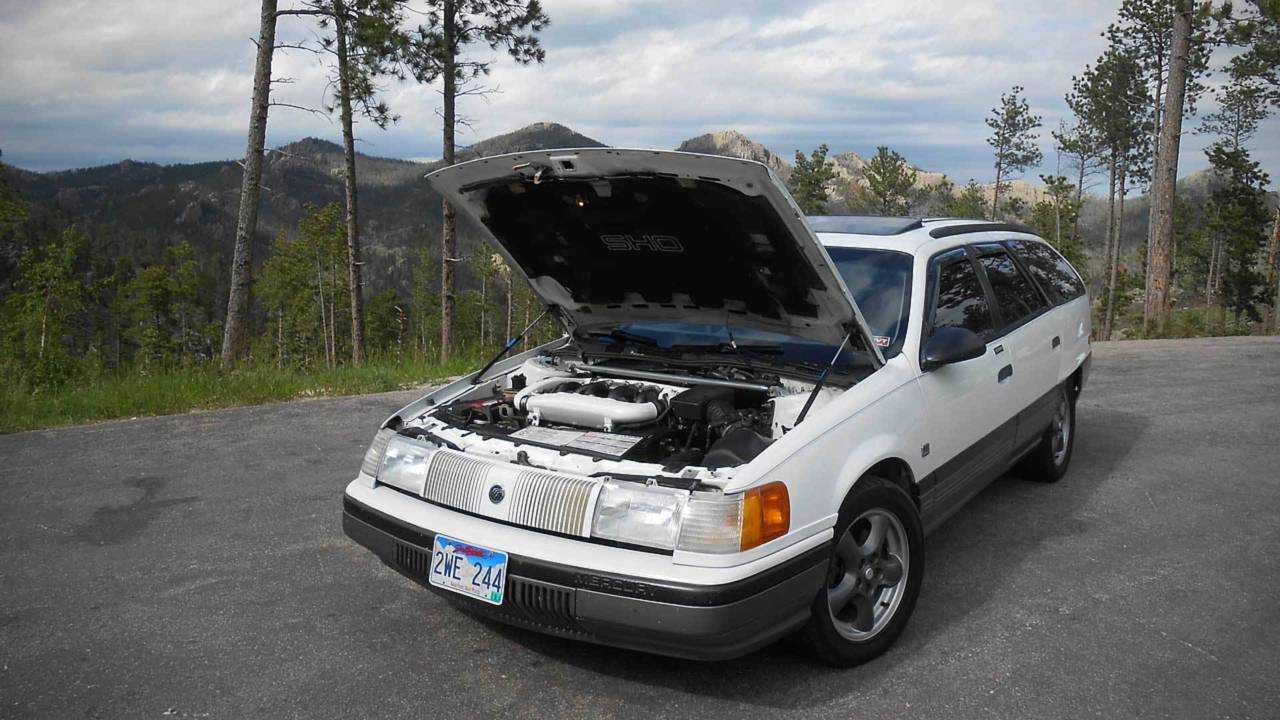 The SHO-swapped Sable wagon. The sleepiest sleeper to ever sleep.

The point is that this 3.0-liter, DOHC, V6 engine appeared out of nowhere in the Ford ranks for 1989, and it turned the performance world on its head. Unfortunately, people tend to get so caught up on the Taurus aspect of the equation that details of this fantastic engine often go unnoticed. Details like the 7,300 RPM redline that was in place solely to keep the accessories from flying apart—the engine was capable turning 8,500 all day long. Details like its maximum output of 220 naturally aspirated hp which, for 1989 standards, made it one of the highest hp-per-displacement NA engines in the world. 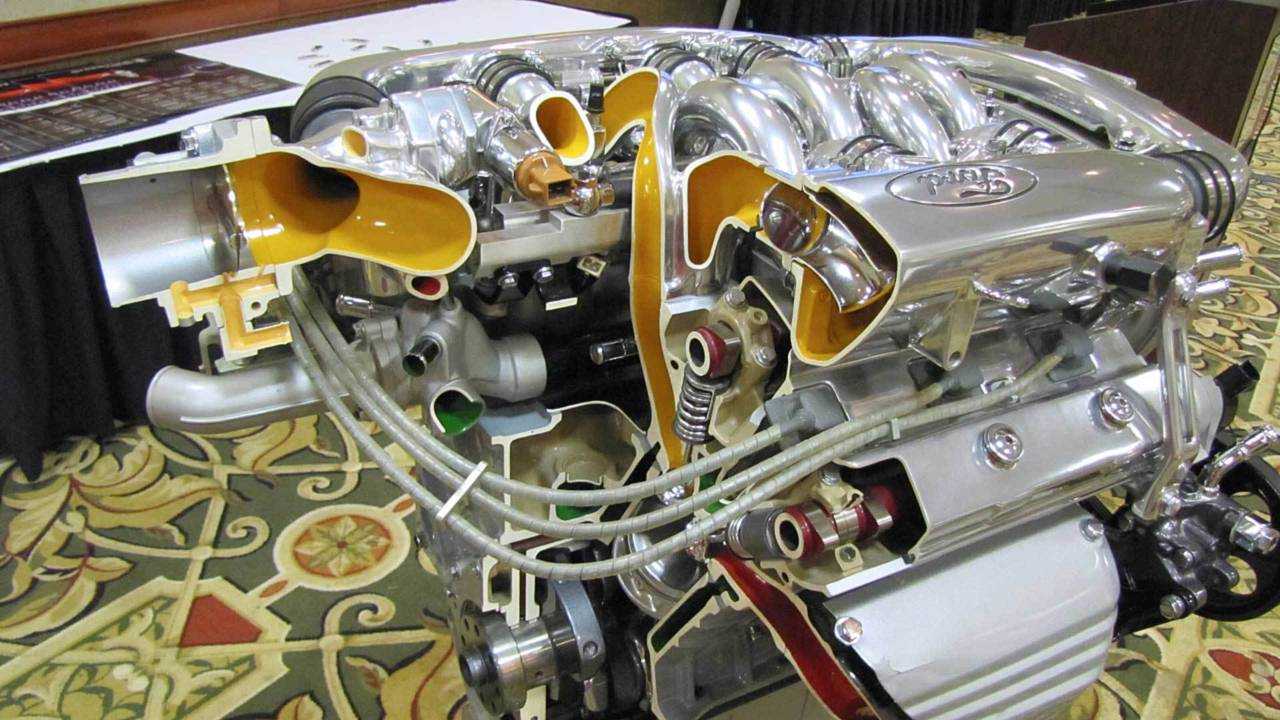 A very cool cutaway of the SHO mill.

There was the exotic dual-stage intake manifold that even today looks like something built by NASA. It wasn’t just for looks either. The six long primary intake runners were designed to optimize air and fuel delivery for better torque at low engine speeds, giving the engine more bite for around-town cruising. At 3,950 RPM, secondary butterflies would open the other six intake runners—shorter runners this time—to feed the engine at higher velocities. The result was basically two torque peaks, one around 2,700 RPM and another at 4,500. Such a thing wouldn’t matter much in a 500-pound motorcycle, but having that range of power in a 3,200-pound car helped the SHO-powered Taurus hit 60 mph in about 6.5 seconds. 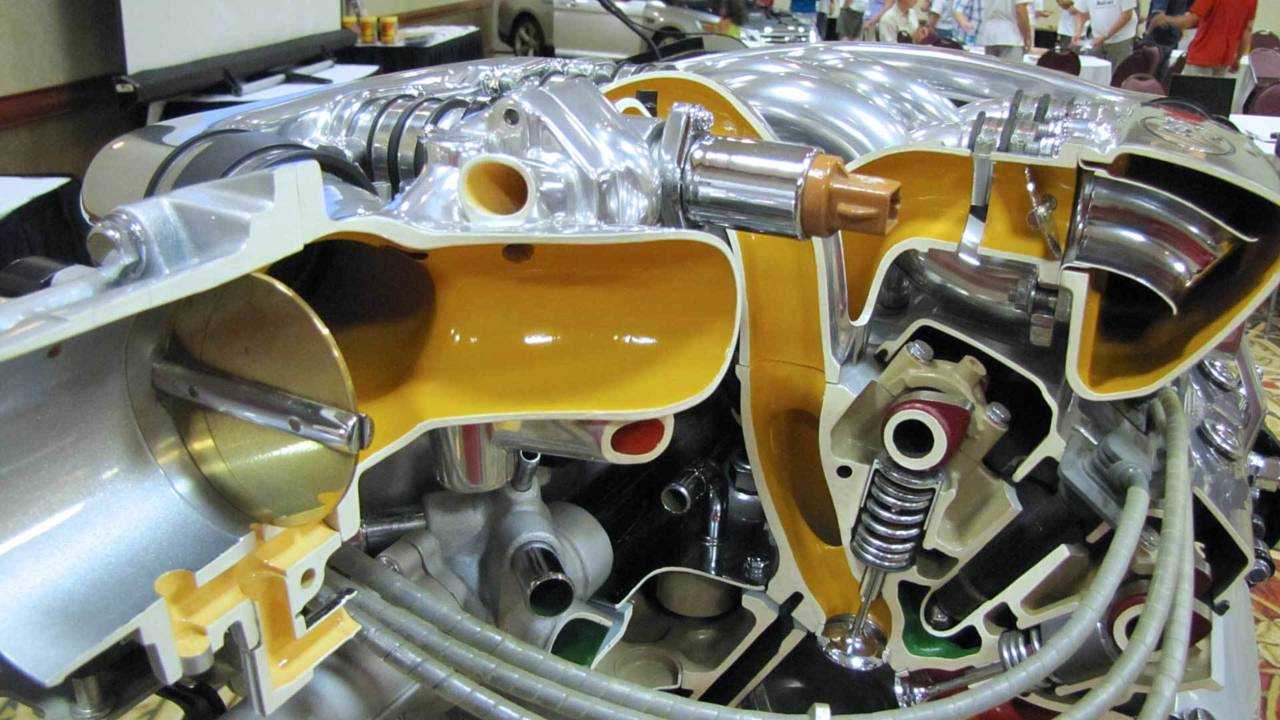 A closer look at the SHO's space-age intake.

Those are just the main details people miss. Dig further and you start to realize just how right Yamaha got this engine. For example, despite making just five horsepower less than the 5.0-liter V8 Mustang GT of the day, the SHO V6 required no air pump to meet emission standards. In fact, outside the state of California, it didn’t even need a freaking EGR system. Cruising on the highway at 70 mph the SHO-powered Taurus could return close to 30 miles per gallon, and then it could rip a high-14-second pass at the drag strip. Admittedly I’ve also witnessed—and experienced—the Mazda-sourced five-speed manual destroying itself in the process, but that’s not the point.

The point is that this engine deserves a lot more admiration than it’s received over the years. Most people know it was built entirely by Yamaha in Japan, using the same dimensions as Ford’s 3.0-liter Vulcan V6. Most people don’t know it’s a non-interference engine—something of a rarity among high-revving Japanese mills—meaning the valves and pistons will never meet one another barring extraordinary, catastrophic failure. By that, I generally mean ridiculous amounts of either boost or nitrous oxide, but even then the engine is surprisingly stout.

Most don’t realize just how bulletproof the SHO V6 really is, even if you neglect to perform the 60,000-mile valve lash for, say, 200,000 miles. Actually, my record is 212,000 miles on a 1993 SHO, and it was still running strong when the subframe turned to dust after 10 years of salty Michigan winters. I pulled the engine and gave it to a friend in Ohio. Last I knew it was still holding residence on a stand in his garage. That’s not the point. 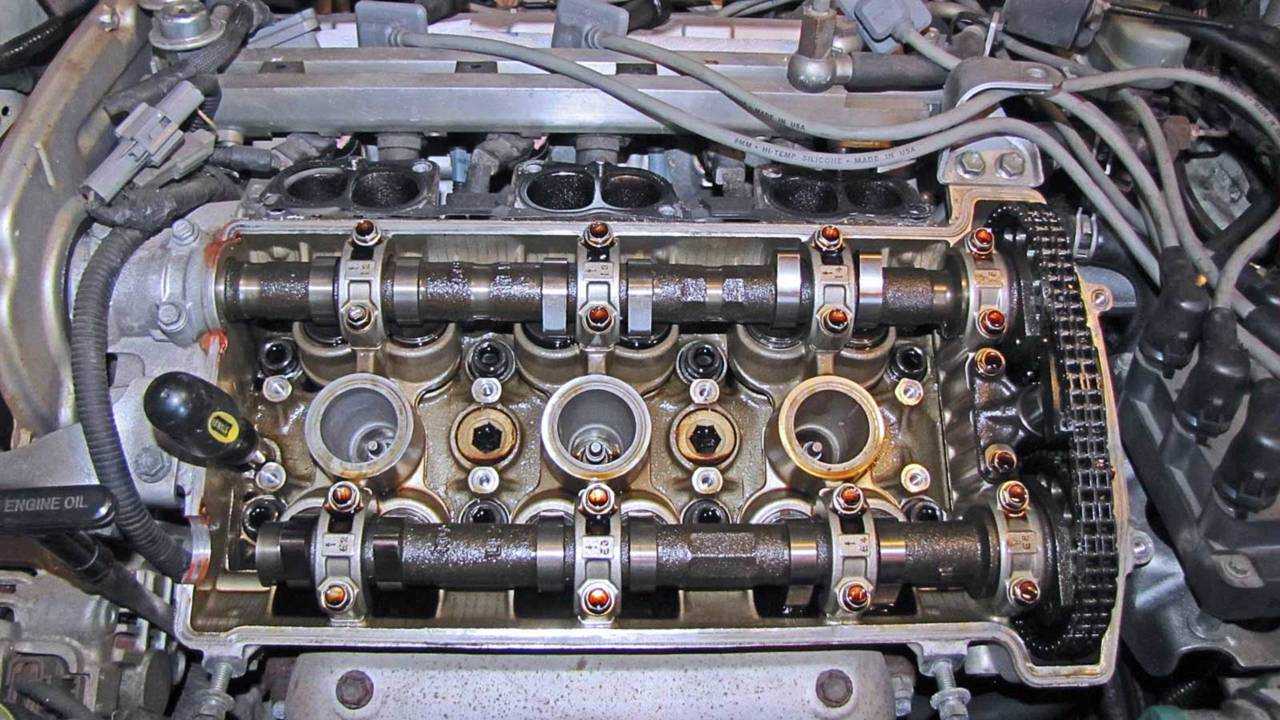 Looks like the top end of one of Yamaha's XS-series triples.

The point is, this engine was destined for great things and I’m not just talking about turning a sleepy sedan into a sneaky sleeper. Some people know it was originally conceived for use in a mid-engine Ford sports car called the GN34. Folks who delve that far into SHO engine history generally think Ford was building a competitor to the mid-engine Pontiac Fiero, which hit the scene in 1984 with all of 92 hp from its Iron Duke four cylinder. Later V6 models would deliver 140 hp, but if that sounds like weak competition for the SHO V6, you’re not wrong.

That’s because the GN34 was not a Fiero fighter. 220 hp in a small mid-engine two-seat sports car in the mid-1980s would’ve absolutely humiliated the Pontiac. Back then, that kind of power was Ferrari 308 territory. Ferrari? That’s right, the SHO-powered GN34 was Ford’s first real attempt to put a Ferrari-fighting, GT40-esque supercar into production. That’s not the point. 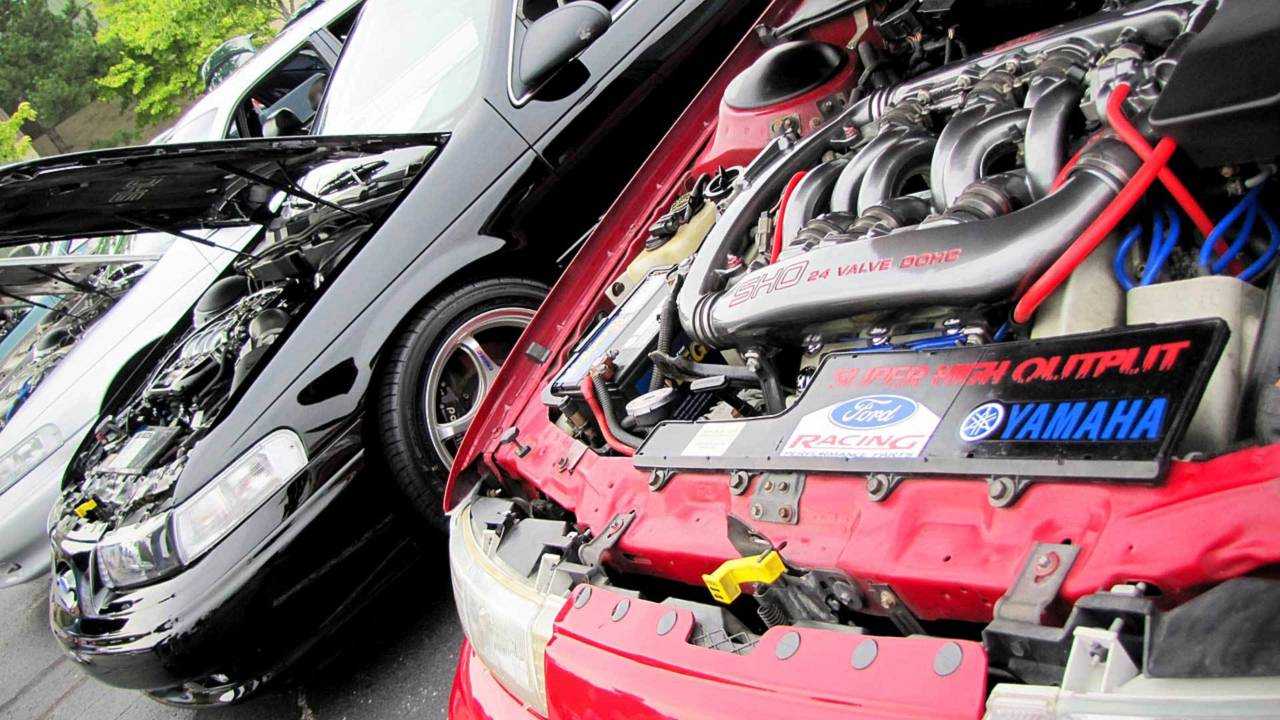 At the SHO show.

Actually, that is the point. In developing this incredible engine, Yamaha built a true game-changer that was years ahead of its time in both power and efficiency. It was a big motorcycle mill that was so good it could’ve battled the Italians on a four-wheel front instead of two. Yes, it ultimately took residence in a Ford front-wheel drive sedan, but even in that application it was phenomenal. In 1989 the Taurus SHO was the second fastest four-door in the world, barely trailing the BMW M5 which cost three times as much.

It wasn’t Yamaha’s first foray into the automotive realm, but the SHO V6 could well be one of the greatest engines of all time.

By: Guest Contributor
++
Got a tip for us? Email: tips@rideapart.com