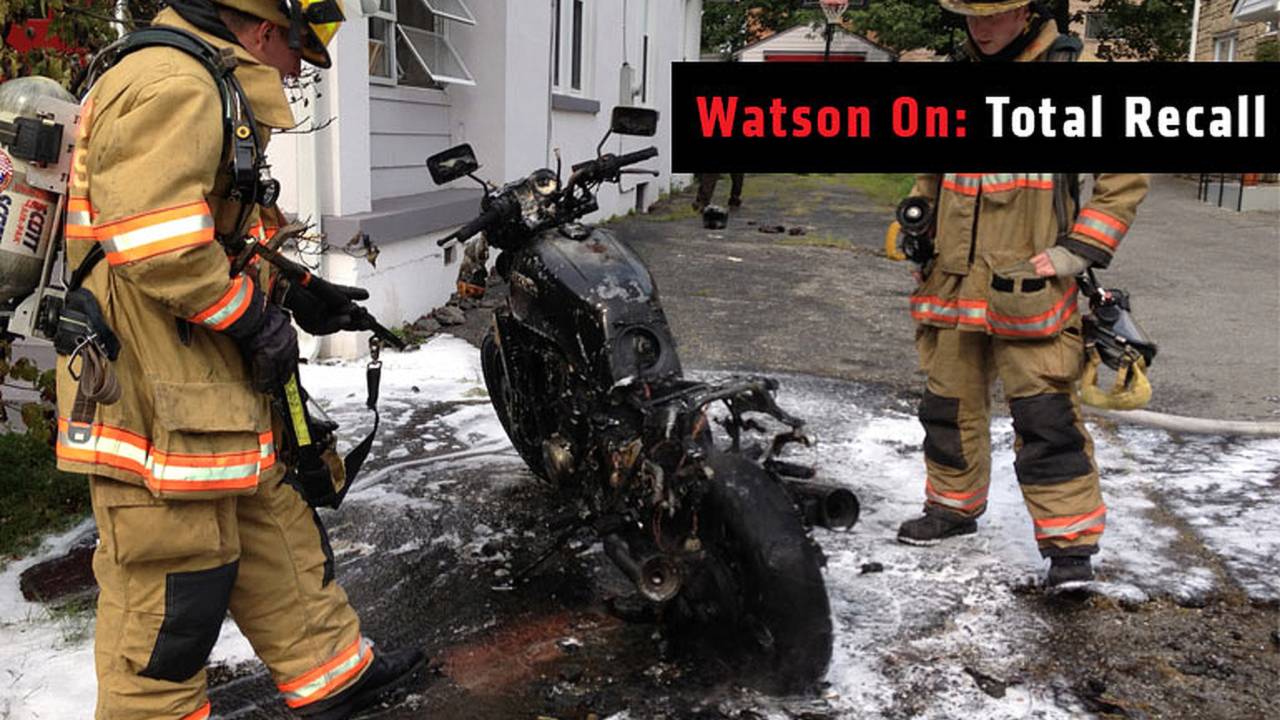 It might make you raise an eyebrow and wonder how on earth some of these recall bikes ever made it into dealer showrooms, let alone leave the factory, with some of the reported issues.

If I was to tell you the very expensive new Italian motorcycle, you had just bought, potentially could catch fire, the steering might suddenly detach and the swing arm shaft pivots could fall out, you’d probably suggest I was jealous and was making the whole thing up.

But if you take the time, like I have, to look at the Recall Database of the U.S. Government’s National Highway Traffic Safety Association (NHTSA) you’d discover things about some of the top selling motorcycles here in the U.S. that could actually surprise you. Like me, it might make you raise an eyebrow and wonder how on earth some of these bikes ever made it into dealer showrooms, let alone left the factory, with some of the reported issues.

All manufacturers of road vehicles, including motorcycles, in the U.S. are legally obliged to inform the National Highway Traffic Safety Association (NHTSA) of safety issues that have been reported to them. These are logged in a national database and owners and dealers have to be informed of a problem. At the same time a manufacturer has to present to NHTSA as to how the issue is going to be remedied.

According to my calculations, more than 70 safety recall notices were issued last year in the U.S. by more than 15 motorcycle companies. A tiny, tiny number compared to the almost daily recalls issued by the automotive manufacturers. But it did strike me as odd that most of the motorcycle problems appeared to be fundamental manufacturing or design flaws and I’m curious as to how or why this happens.

At most manufacturer media introductions for a new bike we are always given the quality message and shown in detail all of the company’s huge efforts to build safe, reliable motorcycles and an explanation of the time a manufacturer has spent in designing, developing and then launching its new model.

Quite often the bikes we get to test have been fettled and gone over with a fine tooth comb before being handed over to the grubby hands of the media and because of that we seldom run into problems. Plus we might get to ride a new bike for no more than a day and don’t live with it on a regular basis and get the real world experience as an owner. It seems to me the problems begin when the production motorcycles are sold to the public.

Can someone explain to me how ‘an exhaust butterfly valve Bowden cable could melt or burn due to excess heat from the catalytic converter’? This, according to the NHTSA report, could potentially cause smoke and/or a fire. Why was that not spotted at the factory before this particular motorcycle was signed off as production ready?

As with all recall notices the word 'potentially' is used a lot in the reports either because it could or it might happen. Nobody is ever prepared to say it will definitely happen.

That burning issue was one of five all on one bike, which also included ‘due to incorrect assembly tolerances, the uniball bearing on the damper rod eyelet could slip out of its seat on the Ohlins steering damper which potentially could lead to the loss of control of the motorcycle'.

The third problem was insufficient Loctite glue had been used on steering head screws at the factory and they might fall out, potentially leading to a loss of control. On top of that the right and left swingarm pivots could also potentially come undone. Finally, the ‘front brake master cylinder reservoir hose might interfere with the threading end of the reservoir retaining screw causing damage, which in turn could lead to a front brake system failure, increasing the risk of a crash’.

Those five issues were all recalls, issued simultaneously for 2012-2013 Ducati 1199 Panigales sold here in the U.S.

To be fair though it doesn’t say how many bikes were affected, or even if any customer actually experienced any of them. Either the Ducati factory, or one of its dealers had detected them in time and Ducati was then legally compelled to report the issue to NHTSA and then presumably inform Panigale customers to bring their bikes in as soon as possible to their nearest dealer.

The GS700 also suffered from faulty electrics on the side stand switch and a rider could potentially go down the road with the stand down. While 2,341 BMW K-Series built from 2007 to 2013 were recalled because ‘brake fluid in the front brake reservoir can foam’. BMW’s top-notch model, the S1000 RR, wasn’t without its problems either. Thanks to a claimed faulty manufacturing process, bolts on 2012 RR’s side stands potentially could come loose causing the stands to fall off the frame. I’m assuming this could happen at any time but I’d imagine it might be pretty scary if the bike was actually moving.

Honda had problems in 2013 with its CB500, CBR500 and CBR500R with a bolt on the rocker arm shaft being incorrectly manufactured. Honda quickly issued a recall because if the bolt was not replaced it could apparently fall out of the cylinder head altogether. That would in turn make the bike lose power and potentially stall and ‘increase the risk of a crash’.

Triumph Motorcycles had a pretty hectic year too with 19 recalls issued in the U.S. across its range. Admittedly some of these were for the same problem – a malfunctioning ABS system - but there were ECU problems on some engines potentially shutting down abruptly and malfunctioning neutral lights that came on when the bike was actually in gear.

Harley-Davidson launched its 2014 Project Rushmore bikes to a big fanfare last August, yet within weeks of delivering them to customers it was having problems with its clutch master cylinders that somehow were allowing air into the system.

It also appeared, according to the NHTSA report, that some of the bikes may have been assembled with the incorrect clutch release plate at the factory and these would prevent the clutch from disengaging. Consequently H-D was concerned that riders may have difficulty slowing or stopping these bike and the company had no choice but to issue an immediate recall.

It wasn’t just the big guys either that had issues. KTM had to contact customers about leaking fuel hoses on the 350 and 550 EXC models that may potentially leak gasoline onto the rear tire and increase the risk of a crash, or in the presence of an ignition source cause a fire. The problem was traced to hoses that developed holes or cracked over time.

Zero Motorcycles with its electric bikes has just had to send out a recall this year. Due to a manufacturing defect the motor rotor may come into contact with the stator when moving. This potentially could cause the motor to seize and the rear wheel on a Zero to lock up and increase the risk of a crash.

Now I maybe over simplifying things here and the complexities of the manufacturing and development processes I am sure are far more complicated than I could ever begin to imagine.

I just find it odd in this day and age that motorcycles can come to market with what appears to me to be basic engineering flaws that nobody actually spotted before they left the factory gate in the first place.

You can check out the information yourself at the NHTSA website: http://www-odi.nhtsa.dot.gov/owners/SearchSafetyIssues