A Farewell To Colin Edwards 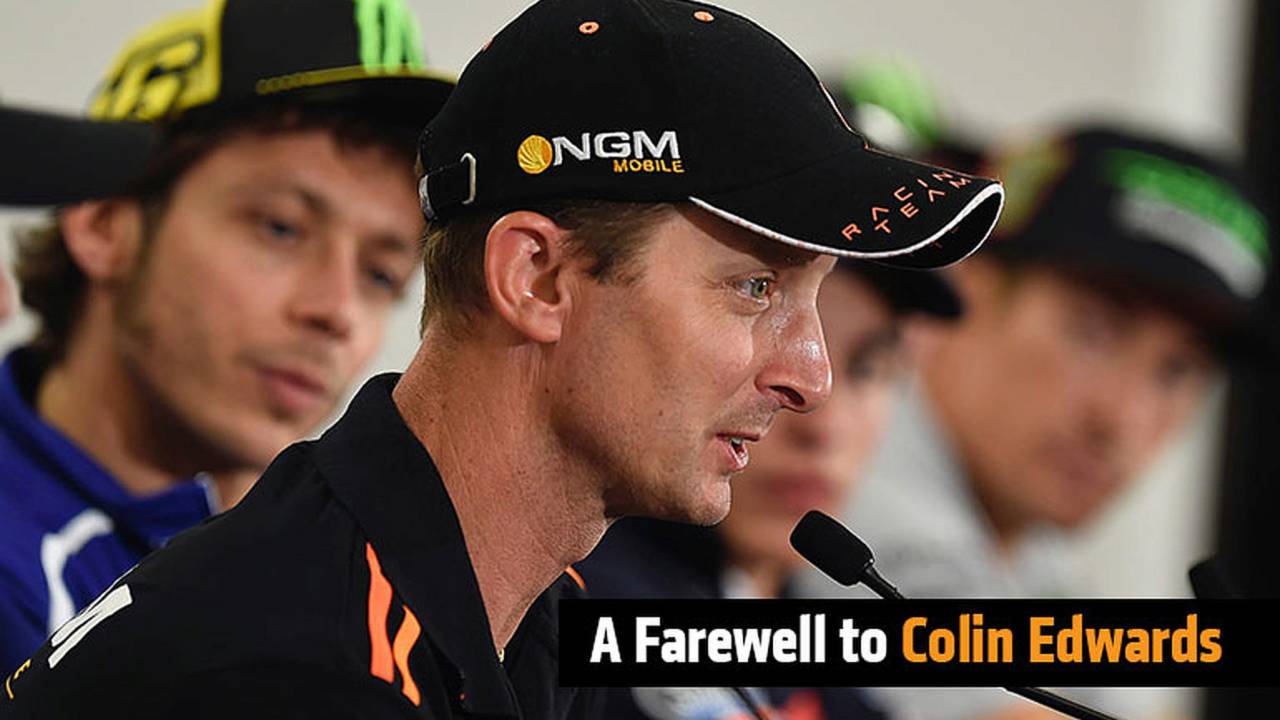 Colin Edwards is set to retire and we remember him for talent, charm and ultimately his infectious personality.

I am not the sort of person to stand in line unnecessarily. I seldom ask for autographs. I’ve been fortunate to meet stars and celebrities of many stripes and, with the exception of some World War II pilots, most didn’t leave much of a lasting impression on me.

But at Indianapolis Motor Speedway in August of 2009, I broke my own rules, allowed myself to become a total fanboy for a couple hours, and stood in line to meet Colin Edwards.

I liked Edwards from the time I saw him in Mark Neale’s superlative documentary on MotoGP, Faster. He was raw, a little goofy, and clearly not concerned with political correctness. I became his fan not just because he was an American, but because he is American. He’s brash, and funny, and blunt. He likes big trucks and big guns and owns a ranch in Texas filled with both. He’s a family man who’s not afraid of dropping the occasional (or not so occasional) f-bomb.

Colin Edwards is my kind of people. Our kind of people, really, as fans the world over fell in love with the Texan as soon as they heard him speak.

Upon arriving on the world stage, rather than try to gloss over his twang and redneck style to fit in among the cool European paddock, Edwards embraced it, turning it into his trademark. At the Nürburgring round of the 1999 World Superbike Championship, oil left by Igor Jerman’s expired Kawasaki was left unflagged for an inexplicable number of laps. After becoming the one of the several hapless victims to toss his bike into the gravel, Colin vented his displeasure in the most appropriate way possible: a two finger salute to the marshals who failed to show the flags. And so was a star born.

But he was more than a personality. He was a double World Superbike champion before I even started riding motorcycles, winning his second title in what may be the most epic on-track battle for a championship that we’ll see in our lifetimes, at Imola in 2002. He slugged it out with Troy Bayliss, the best Superbike rider in a generation, and beat him fair and square, on the track. It was the stuff of dreams for riders and fans alike.

The next time we saw Colin with his fangs fully out was at Assen in 2006, when he battled Nicky Hayden in a two-lap brawl that more closely resembled their dirt track backgrounds, than the polished MotoGP experience we had come to know. Colin crashed in the final chicane, Nicky took the win, and I almost stopped watching motorcycle racing altogether out of frustration.

On a muggy Saturday afternoon in Indianapolis, after a practice session, a sweaty Colin Edwards II sat at a folding table and signed autographs, and posed for pictures with hundreds of fans. When my turn came, I very nearly failed to get out the question I had practiced in line for the last hour. But after an assist from my wife, I finally stammered something about how he seemed to be getting through turn 1 faster than most everybody, and asked why he thought that was.

His reply? “Well, turn 1’s a big balls corner, so I guess if they’re not going as fast as me, they just don’t have big balls!”

It was vintage Edwards.

They say you should never meet your heroes. I say, pick better heroes. The man you see in the Saturday press conferences is the same one you’ll meet in person, and so will say everybody who’s spent time at his Boot Camp.

Today in Austin, at the age of 40, Colin Edwards announced his retirement from motorcycle racing, effective at the end of the 2014. There is no replacing him. Nicky Hayden, himself on the downward slope of his career and Josh Herrin, who is only just starting in GPs, will be left to carry the flag for the United States. But there is no one who can fill the boots of the man who provided some much needed flavor and comic relief to an otherwise stuffy paddock. Edwards was the everyman’s hero in MotoGP, and we may never see another.

It is doubtful that Edwards will disappear from the racing world entirely, but his presence at each round of the championship will be missed by every single person who rides, wrenches, writes or simply watches the sport. From all of us around the world, thanks, Colin. It’s been a helluva ride.