About a month ago, I had a terrible motorcycle accident here in LA. Six broken bones, a week in the hospital and three surgeries. About as bad as it gets, right? Well, not quite. That's thanks to the gear I was wearing — head-to-toe protection. But, I wasn't in leathers or ungainly Cordura or anything like that, I was in jeans and a jacket; the kind of thing I wear to go to a meeting or a bar. C...

About a month ago, I had a terrible motorcycle accident here in LA. Six broken bones, a week in the hospital and three surgeries. About as bad as it gets, right? Well, not quite. That's thanks to the gear I was wearing — head-to-toe protection. But, I wasn't in leathers or ungainly Cordura or anything like that, I was in jeans and a jacket; the kind of thing I wear to go to a meeting or a bar. Combining this level of protection with stealthy looks isn't easy, but it sure was effective. Here's a break down.

This is where looking good and being safe gets a little complicated. Alpinestars sells these jeans — made from dark denim and cut credibly slim — that come equipped with Kevlar panels in the knees and ass to protect you from a little bit of abrasion. They also have armor pockets, but no armor. Not only that, but Alpinestars won't sell you the armor that fits the armor pockets. Great.

But, there is a solution. According to my buddy Mike at Kushitani, T-Pro is pretty much the safest armor out there. And It happens to fit the Axiom's pockets. So I bought a set from him and installed it. Perfect fit. If you look closely when I'm wearing the jeans, you can see the armor, but it's subtle enough that I can wear these most places without looking like a hockey player.

Now, in the crash, I did bust my knee. But, not as badly as I could have done. When the doctors first started poking around, they were totally expecting to find a shattered knee cap along with badly torn ligaments. There was talk of knee replacement surgery. But, after much brow furrowing, the MRI only revealed a few splinters (and a broken femur). The armor did exactly what it was supposed to do. Very impressive given that my knee impacted a steel lamppost at 30mph.

The jeans themselves did well too. At 30mph, there wasn't much abrasion to worry about, but they stood up to what there was just fine. A seam burst in the hip, but there were only a few small marks to my skin there; no real road rash.

The Axioms are $169, figure in $50 or so for armor. Not bad for something I've worn every day for two years now and that saved my knees in a crash. 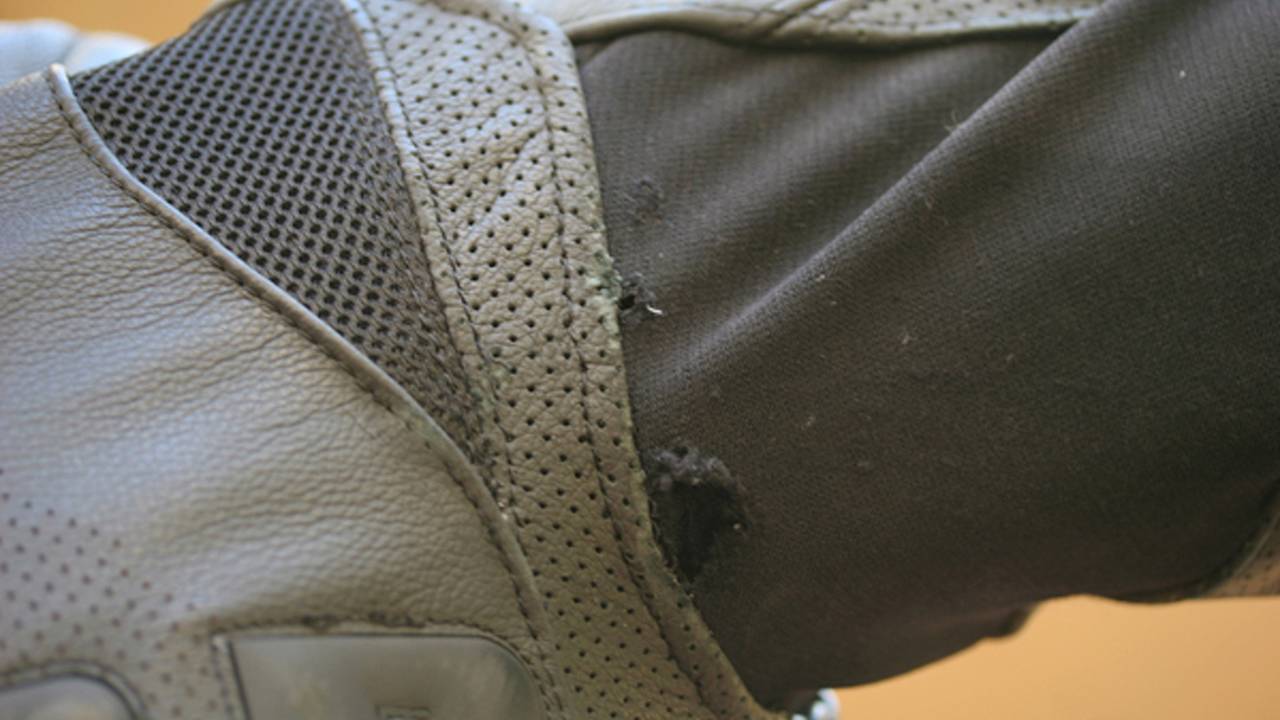 Looking for a nice black leather jacket? At $350, the Overlord is priced way below rival items from Alpinestars and Dainese, is way less gaudy and, believe it or not, made to equivalent quality. Really. Fit is outstanding; heavy articulation throughout means it's able to fit tightly while still facilitating the full range of movement necessary. This has been one of my favorite pieces of riding gear.

Again, like those Axioms, I had to modify it a bit to get it up to my personal standards though. That meant replacing the cheesy, non-CE foam back protector with a CE2 D3O Vyper, and I also swapped the squishy elbow armor for D3O. It's not any safer, but it is slimmer.

Now, I did suffer a lot of upper body damage in the accident. Remember, this was a big crash. Broken wrist, broken humerus. That fucking lamppost impacted my upper arm beneath the armor, where you see the tear in the jacket. Not really the jacket's fault, no jackets or suits really have much armor in that location. The lesson here really is: don't hit a solid object at speed. No matter the protection level, you're pretty much fucked. The one thing the jacket definitely did do, is that because of the tight fit and the really good elbow and shoulder armor, it helped keep my multiply fractured arm roughly arm shaped without any bones sticking out of the skin. Without it, I could have lost the arm. 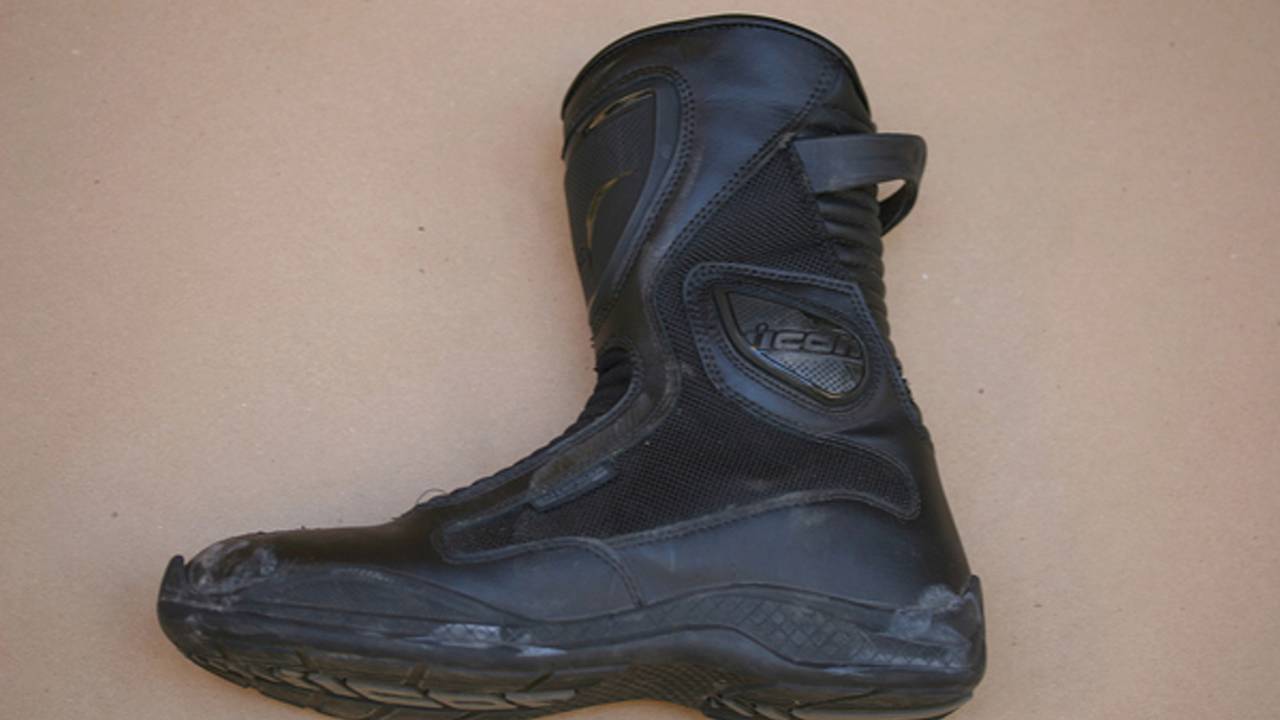 We've criticized these in the past for not being fully waterproof. They're great city boots because they're super easy to put on and off, fit under skinny jeans and look very subtle, but during pouring rain, they did leak on me. Icon says this is because my pair were prototypes, not up to production fit and finish. But we digress, these are totally unique for offering race-level safety in a boot you can walk into a bar wearing. There's a solid toe box, a steel shank in the soles to prevent twisting, solid shin protection and ankle protectors on both sides.

When you first get the Reigns, the fit is very, very tight, and you need to let them break in over a few days, but its that tight fit that makes them safe. Like race boots, they're able to limit the range of motion your ankle experiences. No foot or ankle damage to report at all and, as you can see, these took some hits. 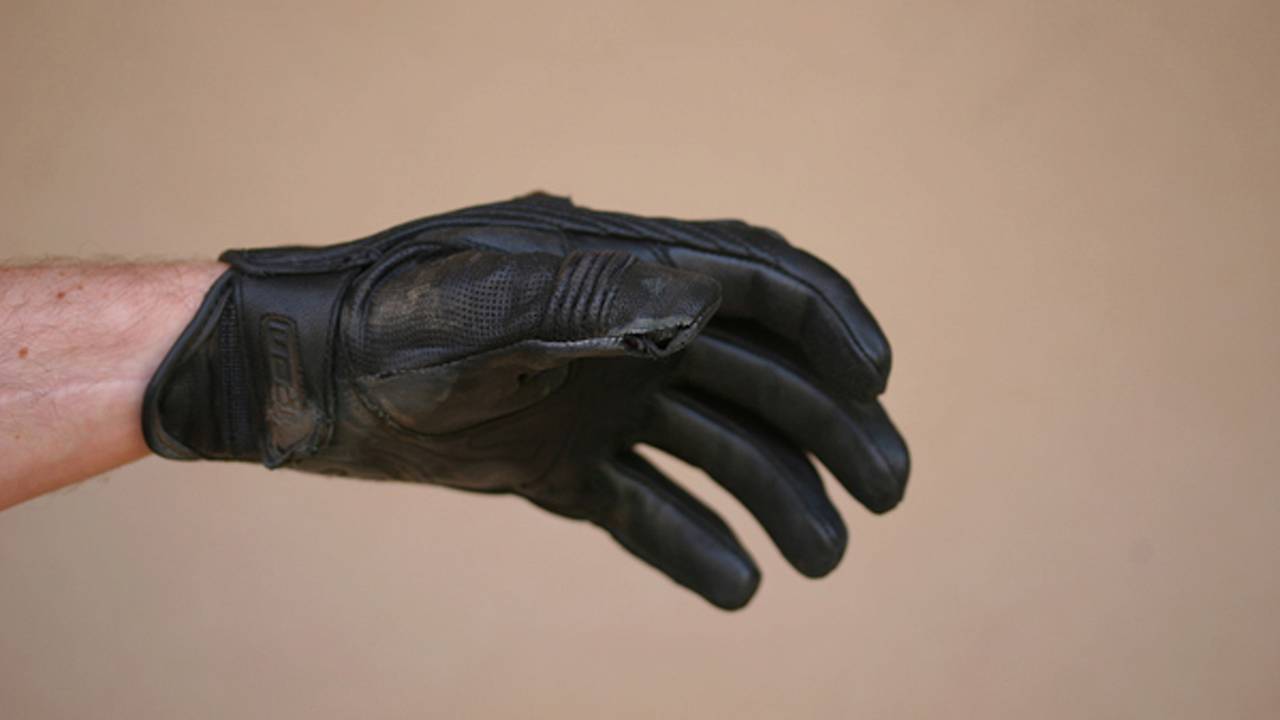 A lot of people, including us, are skeptical of short gloves' ability to offer protection in a crash. The thinking is that, compared to a real gauntlet, there's just not enough retention to prevent them from pulling off in a slide. But, at low speeds in the city, the biggest concern is really impact. Again, I didn't slide a huge amount, but there are signs of heavy abrasion on the gloves, even on the wrist fastening, and they stayed on just fine. The thumb burst and there's holes worn in the fingers, but there's no road rash on my hands at all.

The tankslapper that initiated the crash shattered my thumb, but no glove could really have protected against that.

I don't believe that a pair of race gauntlets would have offered any more protection against the broken wrist. Anything that leaves you with wrist movement fails to protect against this kind of fracture. The only way to do so would be to wear skate-style wrist braces, which would subsequently reduce your control of the bike.

As for their ability to operate a touchscreen? Yeah, they work as advertised. Texting using the iPhone's tiny keyboard can be a teensy bit awkward, but it's totally doable. 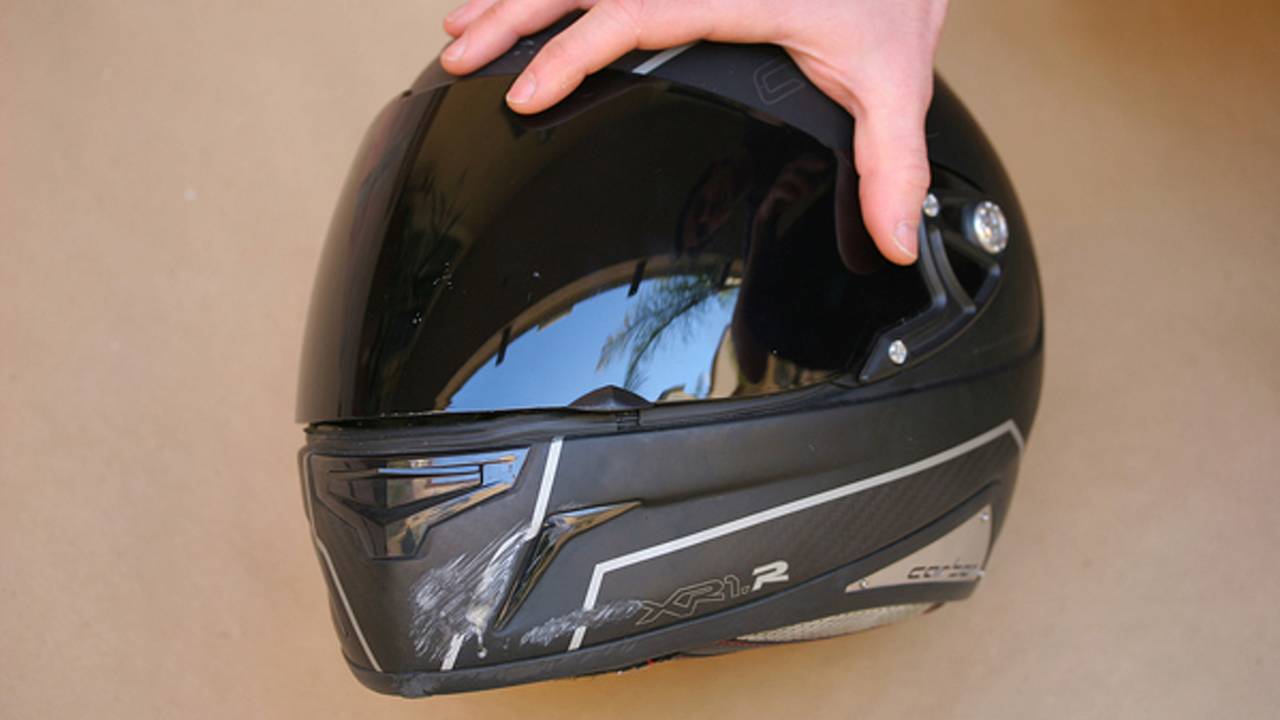 We've previously called this Nexx the nicest helmet ever. And it is. Great vision, extraordinarily low weight, great ventilation, etc. In the crash, I only tagged my chin a little bit. Any full-face helmet would have protected me equally well. I'm just very sad that this helmet was destroyed in the process; I loved it. 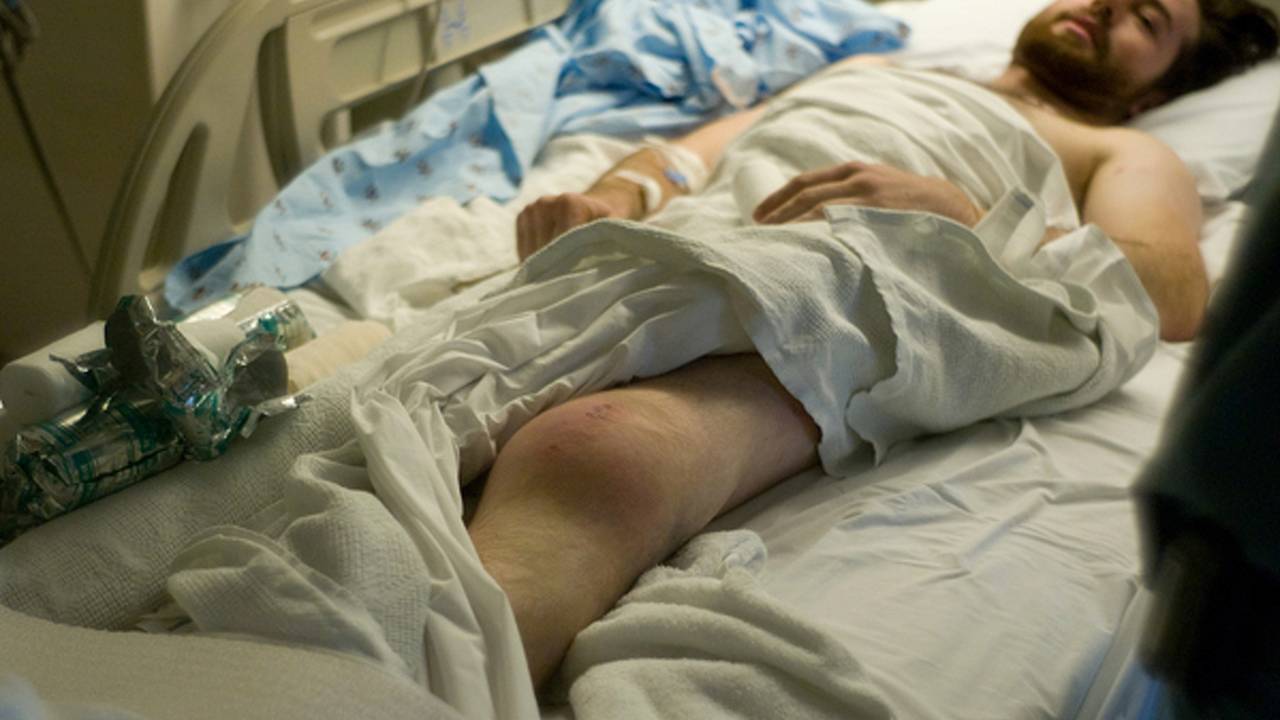 Nearly a month later, my head is still kinda woozy from being put under for the surgeries. But, it is working well enough to know that had I skimped on protection, I probably wouldn't be able to write this at all. Or I'd be dictating it from a hospital bed instead of sitting at home, having just showered all by myself. It's not any individual item that saved me here, it's the full system. Without the entire package, I'd have had huge wounds, open abrasions, more broken bone, massive trauma. Don't get me wrong, I still got fucked up, but my injuries were far, far less severe than they would have been otherwise. How many motorcyclists do you know that have broken six bones impacting a solid object at speed, but didn't have a single abrasion, open wound or any internal bleeding?

Riding a motorcycle is the perfect way to get around a city, but cities are dangerous places on a bike. I wasn't riding fast, I wasn't doing anything out of the ordinary and I was paying full attention. I'm a highly skilled, extremely safe rider. But, I still crashed. That can happen to anyone at any time. Don't be a fool, wear safety gear. Putting together a system that fits into your life takes a little time, effort and money, but once you have it, it'll last you a long time. What's at stake is your life.