His and Hers: Boots made for walking 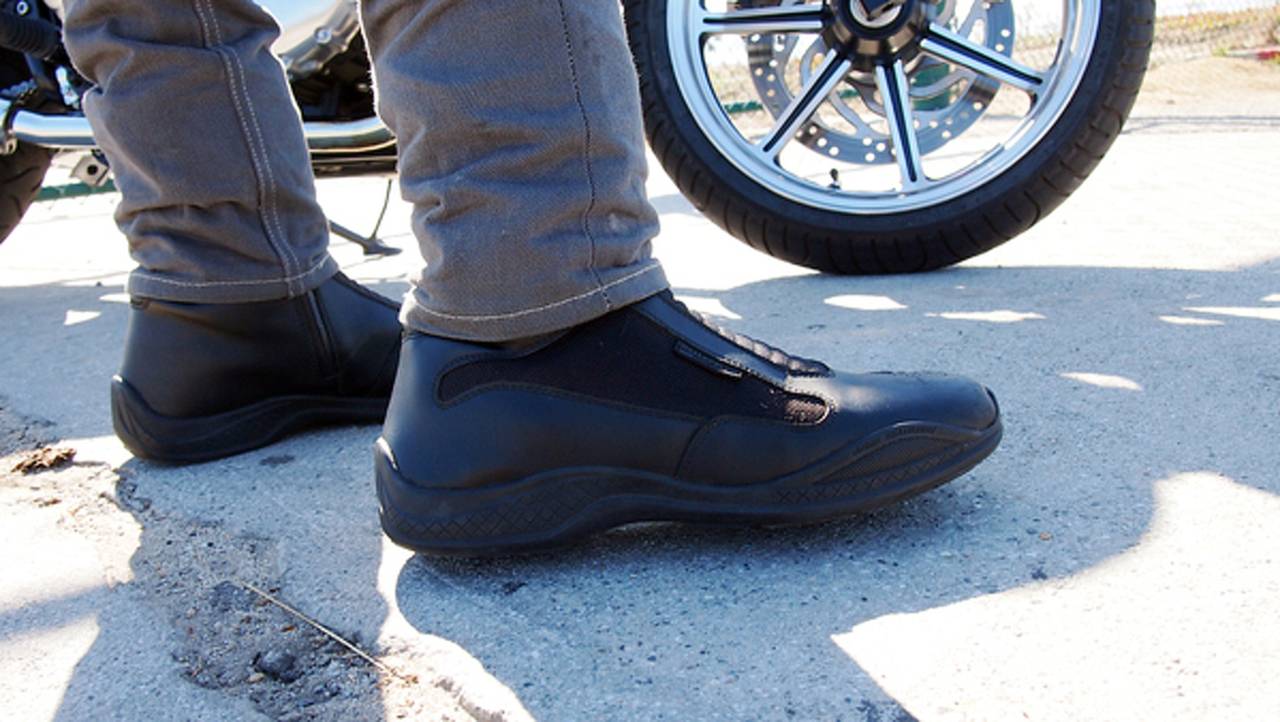 Packing for our west coast Goldwing tour, we each opted to bring along an extra pair of shoes (which took up valuable space in the saddle bags). Would our new riding boots be comfortable enough to walk around in? How about hiking? Days when we weren't really on the bike much? As it turns out, we could have saved the trouble and the space. Sean's Icon Reign boots and my Alpinestars Stella Armada bo...

Packing for our west coast Goldwing tour, we each opted to bring along an extra pair of shoes (which took up valuable space in the saddle bags). Would our new riding boots be comfortable enough to walk around in? How about hiking? Days when we weren't really on the bike much? As it turns out, we could have saved the trouble and the space. Sean's Icon Reign boots and my Alpinestars Stella Armada boots were the only shoes we wore for 10 days straight (and pretty much ever since).

Icon designed these as waterproof boots. I wish I didn't have to say this, but the waterproofing fails. Here's why you should still buy them: Icon has actually made a $160 pair of comfortable everyday street riding boots that offer serious protection, yet blend in with normal clothing.

There isn't much competition in this arena—serious protection that doesn't look like a racing boot and can be worn more like an everyday shoe. One of the few other options to get you close to this look are the Dainese Axial Pro boots, but they come in at more than three times the cost. A certain Rogelio Ramos purchased $500 Axial Pro's specifically because they would fit under jeans. Aerostich Combat Lite boots are another option, but have a much more utilitarian aesthetic at near double the cost. I'm happy to have gotten my hands on Icon's version.

To start, these have amazing protection for a street boot. There is obvious ankle protection on the outside of your ankle and a hidden ankle protector inside. There's also a steel shank that runs the length of the sole to prevent the boot from folding, a reinforced toe box and a large padded plastic plate that protects the shin. The fit is more like a race boot, so all this protection stays in place. Structurally the boots are very stiff, but the smart design allows for ankle movement. They don't have a toe slider, but the sole is extended and beefed up on that side, so you can touch down on pavement quite a few times before it starts to wear. The shiftpad design is very functional (even if I think it may be the source of waterleaks).

But with all that protection, these boots are great for daily riding because they don't fit like clunky moto boots. They fit like shoes are supposed to fit. I can even wear my skinny jeans over them. They're really nice to travel with because they go on and off extremely easily with a zipper and velcro (real velcro, not hook and loop closure).

The biggest reason I've been wearing them everyday? The Reign boots are comfortable. Comfy enough to walk several miles, hike slick rock, wear all day long and happily put back on the next morning. My size 10.5 boots run true to size, which is to say slightly tighter than Alpinestars or Gaerne. Expect them to break in a bit over the first two weeks and pay close attention to the zipper the first few times you put them on.

I didn't sugarcoat the fact that these boots aren't waterproof. Water resistant? Sure. A half hour riding through light to medium drizzle is no big deal and you can expect dry socks. Try wearing them in what's commonly called a toad-choker and you'll be wringing your socks out and cursing the soul who put those giant "Waterproof" tags right inside. Waterproofing is a black art. The last similar boots I owned cost $9 more, looked like shit, fell apart much faster and needed a lot of silicone before they were anywhere close to water-tight. They also didn't have the superb ankle and shin protection of the Reign boots (read: they had none), and never in a million years would they fit under my jeans.

Icon got enough right to make these boots well worth $160, and I'm going to see if a tube of silicone can't fix the rest.

Some day long after we became best friends, Jessica told me that the first time she met me she really didn't like me. In much the same way, I got to know the Stella Armadas. I'd been curious ever since a pair was given away during Alpinestars Lagniappe. These were pretty much the only non-racing ladies' motorcycle boots I'd ever seen pictures of that weren't heinously ugly. Now I finally had them in my hands, and I really wanted to like them more than I did. But the leather—a little too shiny. The protection—a lot too little. The branding—a little too much.

As a rider there's one obvious thing you notice when you pick up these boots: there's no armored ankle protection, rigidness to the sole or numerous other features that we should probably be expecting from boots to be seriously considered as honest-to-goodness protective gear. I think it's safe to say there's an industry wide disparity when it comes to the protective features found on most men's gear versus most ladies' gear. Gear for ladies is slimmed down, leaned out, and, quite frankly, less fully safety featured. True to that form, the Stella Armada boots offer protection in a few limited ways: the quality leather is clearly going to provide good abrasion resistance. And while the leather is soft and pliable, the large area the boot covers combined with a full length lacing system allows you to tweak compression and fit through the foot and all the way up the leg. A super snug yet comfortable lacing job gives structure that helps keep the ankle and foot from twisting in ways they shouldn't. There's also a small added cushion that covers the outside ankle bone, and the design of the boot places a thick amount of padding against the shin bone.

There is some protection, but as ladies' boots that are being sold by a motorcycle gear company as motorcycle specific boots at $330, they should simply have more protection than they do. However, I can't punish these boots for not being the mythical unicorn that doesn't exist. I'll be the first in line as soon as the fully armored, fashionable street boots for ladies' come around. In the meantime, how about a practical option for local daily riding? And by that I mean boots that I can comfortably walk into a client meeting wearing, and not look like a lumberjack or a streetracer.

Sometimes I wear my trusty old cowboy boots. Or there are options like the Melissa Tall Lace Boot by Frye. Almost any quality leather boot, motospecific or not, is going to provide the basic abrasion and rigidity protection I describe above. Assuming they're constructed from high end materials, most all of these options are also likely to hit at or over a $300 price point. So if the Armadas don't have race-level protection, what won me over instead?

They are fashionable boots that really work on a motorbike

And when I say work, I mean these are smartly designed boots for actually riding. Hard soled boots are slippery and don't grip pegs. Leather can be stiff and limit ankle movement. It gets even worse if you add in chunky heels, or any kind of significant notch before the heel. None of this is a problem with the Armadas. The textured rubber sole performs great, yet is low profile enough that it pretty much just looks like a black sole while you're wearing them (it's also replaceable by Alpinestars if it ever wears out). I wish there was a shiftpad on the left toe (more for looks than anything else) so I might add one, along with some quilted leather to cover the subtle Astars logo on the shin strap.

They are pretty damn durable

I couldn't wait to scuff up the leather and make these things look worn in. Every time I sat on the asphalt for a parking lot picnic, hiked up or slid down a rock face, or tromped through spiny vines, I'd hopefully check for scuffs, scrapes and scratches. Nothing. These things are robust. I finally succeeded at scratching the leather pretty admirably on the inside of the right boot when I was attempting to kickstart the XR100 for a solid ten minutes (so if you don't have an electric starter, beware). I was able to wear down the shiny-ness a bit, but this leather takes a lot to beat up. Impressive. I'm keeping an eye on the zipper; it's my only reservation about their longevity.

They are the most comfortable shoes I own

From unbroken-in to ten straight days of wear, I was most won over by the comfort. These boots end up being stiff where it helps, but flexible where it's needed. I can (and have) walked and hiked miles in them. The zipper also means quick on and off and a set-it-and-forget it situation for the laces. When you're gearing up and down all the time, this is a life saver. These are great boots for touring.

Lastly, the waterproof liner is magical. Where Sean's boots faltered, these excelled. I emerged from the aforementioned toad-choker with socks as dry as could be.

I still wear my (men's) SMX+ boots in the canyons, but I wear the Armadas almost every day (even when I'm not on a bike). Yes, as a whole, ladies' protective gear needs more robust protective features. But while we're all seeking the holy grail of motorcycle gear, I'll happily settle for these with their top grain leather, amazingly comfortable fit and great riding performance. The Stella Armada boot is not necessarily any safer than any other $300 leather boot, but its design features make it much more functional when it comes to riding.