The fastest electric motorcycle in the world 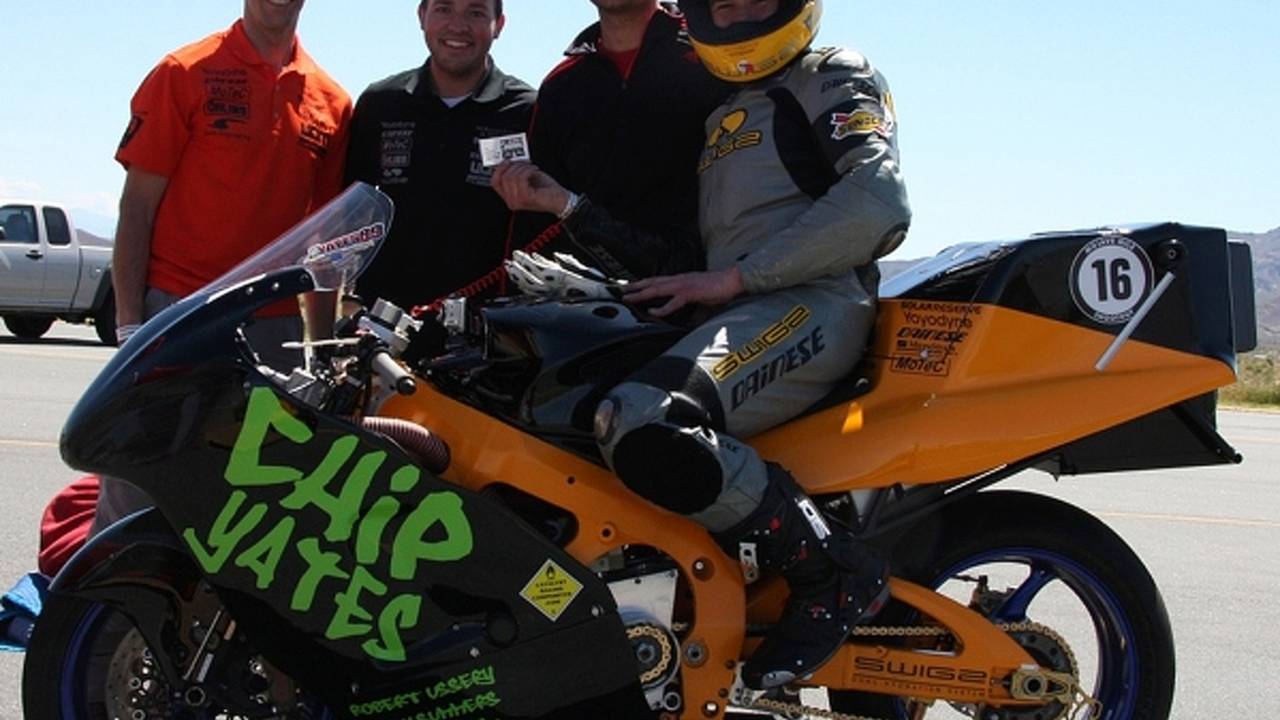 For the second time this year, Chip Yates has made history. In January, he placed second in a race against ICE superbikes using his homemade electric superbike and yesterday he unofficially set a new land speed record by a comfortable margin. Racing at the Mojave Mile, the garage inventor reached a top speed of 190.6mph. This is made extra impressive not only because he exceed the official electri...

For the second time this year, Chip Yates has made history. In January, he placed second in a race against ICE superbikes using his homemade electric superbike and yesterday he unofficially set a new land speed record by a comfortable margin. Racing at the Mojave Mile, the garage inventor reached a top speed of 190.6mph. This is made extra impressive not only because he exceed the official electric motorcycle land speed record by 17mph, but also because he did that in a mile-long drag race, not on the open expanse of the Bonneville Salt Flats. The thing is, the ever-modest Chip is actually disappointed with the result.

Update: Chip clarifies the presence of the KERS lever.

Update: Some of you were asking if Chip was running KERS this weekend so we ran that past him. "I run the KERS lever all the time to give me the default rear wheel braking. The way our software works, my KERS commands from the lever are summed with my throttle position sensor to arrive at the final requested torque command. For the Mojave Mile, I had my finger on the KERS lever and as I rolled on the throttle, used tiny amounts of KERS lever to fine tune my throttle command to prevent wheelies. Think of it like the throttle is the coarse control and the KERS is the fine tuning control - worked perfectly and I got two good launches! It works well at Auto Club to give me quite a bit of regen and the effect of a rear wheel brake to get me pivoted into tight corners."

"The front wheel KERS system is sitting on a shelf in our race shop ready to go - thank the TTXGP ban for why it never saw the light of day in real race conditions."

"I have some plans to use it though, after Pikes Peak!"

When Chip called us late last night, as he drove home to Orange County, California, all he could talk about was how disappointed he was and the problems they’d encountered at the Mojave Air and Space Port runway. The rented generators had been a different spec than they’d practiced with and the team blew both their battery chargers, meaning only two runs were possible using the charge level they’d showed up with. Those two runs were made difficult by extremely high crosswinds which saw the modified GSX-R wearing a Hayabusa fairing begin to wobble as it got above 170mph. Watch this video, considering the speed, that amount of wobble is pretty scary. Chip was really hoping to reach 200mph, a speed he’s certain the bike is capable of. You can see him chop the throttle at 190 in the video.

“All our models of the bike’s performance as well as the data collected from today’s runs put our top speed on a one-mile course at over 200 MPH, but unfortunately I was unable to go full throttle for the whole one-mile run due to a high speed buffeting that caused some weaving of the bike,” explained Chip. “I’m disappointed about not reaching 200 MPH today, but I know we can do it next time out and for now I have to be happy with establishing our superbike as the fastest electric motorcycle in the world!”

The Mojave Mile is a one-mile standing-start speed trial. Car and bike riders have a single measured mile in which to reach the highest possible speed before they enter the braking zone. The event is held on a private 12,000-foot runway in the Mojave Desert.

The official 173mph electric motorcycle land speed record currently belongs to Lightning Motorcycles, which also won the TTXGP series last year, a series from which Chip was excluded after his bike crossed the maximum 250kg weight limit. That official record was set as a two-way average at an officially sanctioned land speed record event.

Next up for Chip and the Swigz Pro Racing team is the part dirt/part asphalt Pikes Peak Hill Climb on June 26. Chip tells us he plans to put in a bunch of practice on local dirt roads as he modifies the road racer for the hill climb. Nutter.