The Dark Side: moto-journalism in the age of the Internet 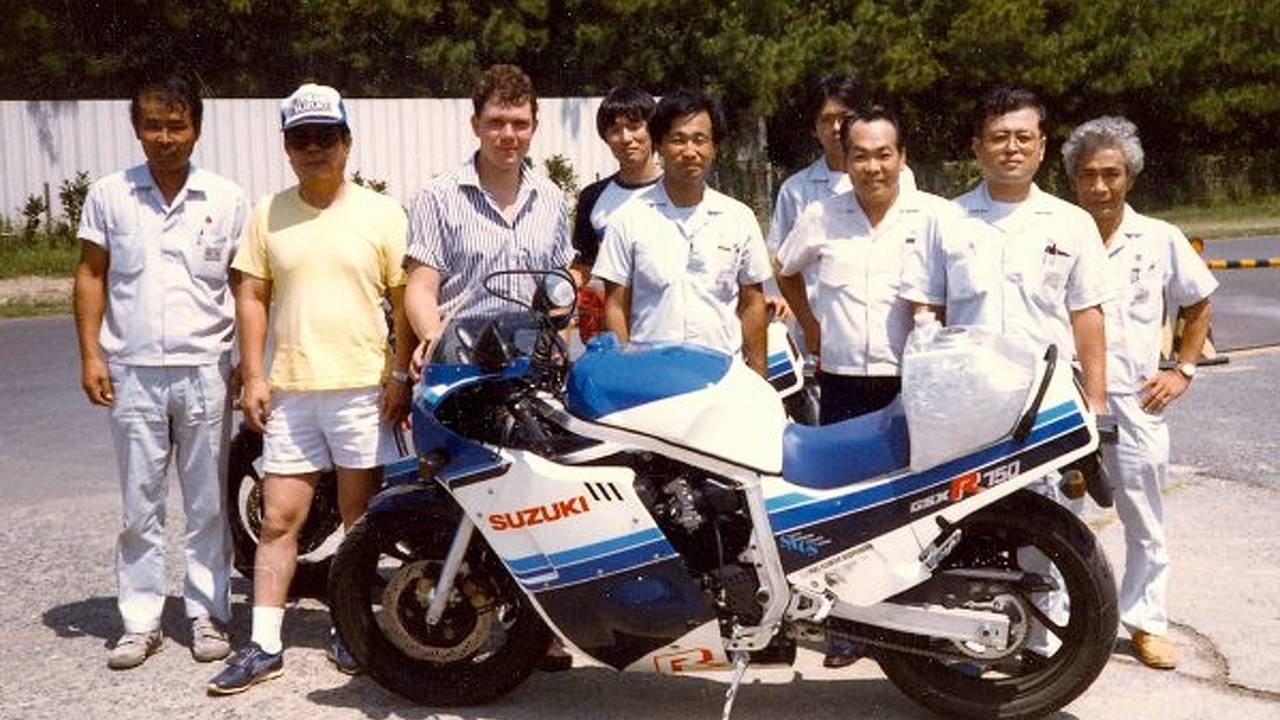 So, Mr. Editor Siler says to write us something about the good old days, y'know, when PR accounts were flush and motorcycle magazine editors were plied with heaping mounds of cocaine and rows of leggy high-class hookers. Sorry, Wes, nothing nearly that sordid, though things did get kinda ugly in a Rome clipjoint once when I refused to pay $300 for a demi of cheap champagne, a plate of ladyfingers ...

So, Mr. Editor Siler says to write us something about the good old days, y'know, when PR accounts were flush and motorcycle magazine editors were plied with heaping mounds of cocaine and rows of leggy high-class hookers. Sorry, Wes, nothing nearly that sordid, though things did get kinda ugly in a Rome clipjoint once when I refused to pay $300 for a demi of cheap champagne, a plate of ladyfingers and a knee rub under the table.

A special welcome to our newest contributor, David Edwards. This is David's first original column for Hell For Leather, look for regular contributions from here on out. — Ed.

As I write this, it's been just over a year since the publisher shuffled into my office at Cycle World, closed the door and cleared his throat. Five minutes later, my 25 years at the magazine had come to an inglorious end, thanks very much, no warning, no tip-off, no chance to say goodbye to the staff, nor the courtesy of penning a farewell editorial to CW's 300,000 readers. All that was missing was a perp walk. Shabby stuff, but I'm a big boy and that's how business is done these days. Sadly, the last mom-and-pop vestiges of Joe Parkhurst's magazine, started on a shoestring in 1962, were gone.

When I came to the magazine in 1984, Parky had been out of the picture for several years, Cycle World sold off for big bucks to a giant consumer-publishing outfit, but there was still a human side to the operation. The CEO was straight out of central casting, a likeable, swaggering man with ink in his blood, plus more than a touch of motor oil. A captain of industry who'd knock back a few with you at the hotel bar and tell old tales of having to duck behind a divan when gunfire broke out in a Mexican sporting house. Hardly the case anymore. During my last 18 months at the magazine, the CEO was a bloodless bean-counter dispatched from France by the parent company to "sort out" the American subsidiary. The man couldn't produce a magazine if you put a pistol to his bony temple, but he could sure wield a scalpel, cutting budgets, axing jobs, freezing salaries and selling off titles at a furious rate.

What, you may ask, does all this have to do with the lead photo of your humble reporter being pushed off into the night aboard a first-gen Suzuki GSX-R750?

The year was 1985 and it didn't take a genius to see that the GSX-R would be a milestone motorcycle, the first modern sportbike — apologies to Honda's Interceptor 750 and Kawasaki's Ninja 900 — a true repli-racer. Every competing moto-mag would be doing a cover story on the new Suzuki; how to make Cycle World's coverage stand out? A plan was hatched: We'd take a bike straight off the Hamamatsu assembly line, leave it bone-stock right down to the blinkers, mirrors and passenger pegs, ship it to America, fire that sucker up and run it flat-out for 24 hours, hopefully setting a new FIM world speed/distance record in the process.

Which is exactly what happened, despite 100-degree temperatures during the day, suicidal javelinas on the track at night and a fit of chunking rear tires. A crew of six CW staffers took turns piloting the GSX-R wide-open at 150-plus around Uniroyal's banked 5-mile test circle in the West Texas desert just outside Laredo, notching world records for 6 , 12 and 24 hours. For the day we averaged 128.303 mph–including refueling stops and tire changes–and covered 3079 miles.

** In preparation for the GSX-R record run, I flew to Japan to verify the bike as stock, put on some break-in miles and test an auxiliary rear-seat gas tank intended to stretch mileage between refueling stops. The extra tank worked at Suzuki's Ryuyo test track but not at full chat in Laredo, where it refused to drain and was replaced by the stock passenger pad. **

"WE SET WORLD RECORD" blared CW's December '85 headline. Inside, one of the great participatory stories in moto-journalism. Today, 25 years later, it's a story no magazine–and certainly no website–could hope to undertake. When all costs were tallied, including a flight to Japan, getting the bike, riders and support crew to Texas, track rental, insurance, ambulance, food, beverages, lodging, fuel, tires, FIM certification, photography, etc., etc., on and on, the project rang in at a whopping $38,000! Suzuki provided the GSX-R and a couple of people for tech support, but the magazine was on the hook for everything else. Thankfully, our boss at the time–the good CEO–saw the value in such a story and funded half the endeavor from his special-projects account. Monsieur Pinchfist, in between rounds of turning off light switches, would have spiked the project the second he heard about it.

Of course, tight budgets and unenlightened leadership are not the only problems facing the motorcycle media these days. Plummeting new-bike sales, anorexic advertising revenue, a graying readership, paltry newsstand sales, overworked staffs, the whole Print vs. Pixel debate...fact is, motorcycle journalism is at a critical watershed moment for all involved–readers, editors and advertisers.

Traditional, segmented magazine content–columns, letters, news, previews, road tests, features, product evaluations, race coverage–is losing its relevance in the age of the Internet. Note I did not say print is dead, nor do I think it ever will be. I'd even argue that as Snippet Journalism increases online, a print product's strengths of impactful layout, dazzling photography and in-depth writing–its sheer readability–only look that much better, that much more needed. It's just that content has to change, maybe publishing frequency, too (bimonthly, quarterly). Oh, yes, and pricing. With circulation and ad sales dwindling, readers should expect to pay more of a fair share. What, you thought your discount $12.99 subscription covered the cost of paper, ink, production and shipping? Really? Not even close, and that can't go on.

Speaking of support, the industry has to step up, too. Is it right that for six months earlier this year the world's largest motorcycle company didn't buy a dime's worth of advertising in Cycle World, for instance, all the while enjoying the benefits of two cover stories on its products, plus multiple articles inside? The recently departed Cycle News had more problems than poor ad sales but should serve as a wake-up call. Even before the Internet, there was no guarantee that enthusiast publications would always be here  (R.I.P. Cycle, Cycle Guide, Road Rider, Popular Cycling, Modern Cycle, et al).

Which brings us to the Internet, the one growth area in modern motorcycle journalism, but not without serious issues of its own. The editorial website has been with us for about a decade now, still evolving as its own medium. At first, standalone bike sites were manned by journalists who couldn't get (or keep) jobs at magazines. Content tended to be second-string print stories plopped down on the screen. Still way too much of that. If the site was associated with a print magazine, the powers-that-be just wanted the magazine in whole transferred from print to pixel, a quick-n-easy (not to mention cheap) way to generate content, never mind that such cannibalization hurts both the website and the magazine. There's still way too much of that going on, too. Much of this comes down to money, of course, lack of which has always plagued edit sites. I can't speak for other motorcycle dot.coms, and I haven't seen the spreadsheets in a year, but no way the profits from Cycle World's site offset the current losses in print revenue, not by a long shot.

In an ideal world, the website would evolve into, in essence, a fully staffed daily newspaper, while the magazine, free from fretting about timeliness, late-breaking news, previews and race coverage, could become more of a complementary coffee table book playing up the tactile reading experience. Something to curl up with and savor every month...or maybe every other month. Will it happen? Yes, I think eventually somebody will get it right. Of course, I've been saying that for about 10 years...

And what of Hell For Leather, now embarking on its subscription experiment? During my year "in the wilderness" I've done much mousing about and HFL always struck me as a standout site. Editor Wes and Creative Director Grant understand that a website is its own distinct entity and needs to be treated as such. It's one of the only sites that has anything resembling web-friendly art direction, not just the usual ho-hum photo-text-photo-text. HFL is interesting and opinionated (okay, sometimes too much so), maybe even a little addictive, which is why when asked I agreed to come onboard as Senior Contributor. Stay tuned, then, for more sins of passion — cocaine and hookers not needed.