An electric bike from Brooklyn 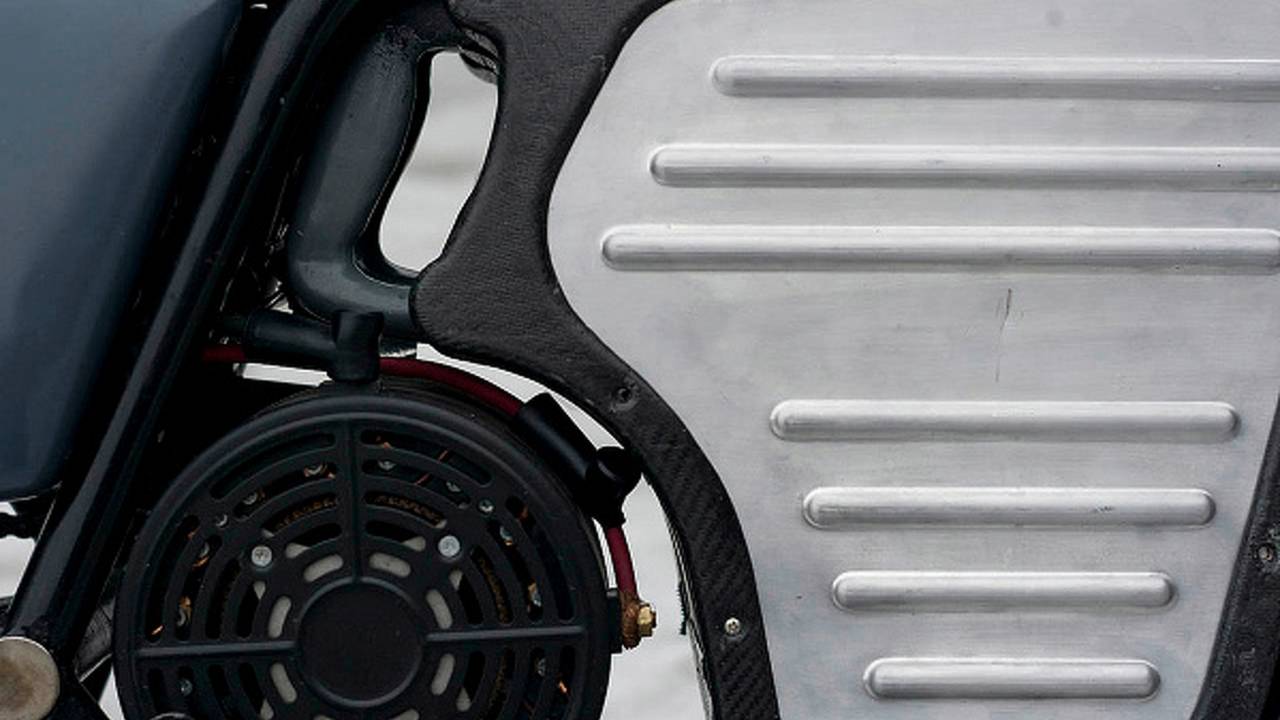 The pretty cafe racer you’re looking at is based around a downsized-version of a Norton Featherbed frame and fitted with brushed aluminum bodywork. But, the motor isn’t an ancient parallel-twin, it’s electric. It’s the first prototype from a new startup that’s trying to design the perfect electric motorcycle for New York, then build and sell it in Brooklyn. We sat down with Jim Carden a...

The pretty cafe racer you’re looking at is based around a downsized-version of a Norton Featherbed frame and fitted with brushed aluminum bodywork. But, the motor isn’t an ancient parallel-twin, it’s electric. It’s the first prototype from a new startup that’s trying to design the perfect electric motorcycle for New York, then build and sell it in Brooklyn. We sat down with Jim Carden and Wes Cox of Brooklyn Motorized to discuss their vision for New York’s two-wheeled future. Photos: Grant Ray Wes: “Do you acknowledge the electronicness of your motorcycle with the aesthetics and just totally embrace it and make it plasticy and CPU-looking or do you say no, we’re going to try and keep the grease and the gasoline smell about this thing somehow?” Jim: “We saw an opportunity to do a motorcycle that was really geared towards ubran use. Something that was really catering to riders in the city. People who are running errands and commuting. Something a little different that what was already out there.” “The original idea was not electric. We were going to do an ICE motorcycle that was much small, much shorter, with a much lower seat height. Just something that was more nimble for getting in and out of traffic, but had an aesthetic that was different from the scooters that were out there. That was the very original impetus. Then we realized there was an opportunity to do something that was electric.” Wes: “I think electric is something a lot of small companies are jumping on because you can do things with electric motorcycles that you couldn’t do with internal combustion engines. Jim: “When we looked at the competition and what was out there, we realized that no electric motorcycle would work in an urban environment because you have to plug in in a garage. The vast majority of people that live in urban areas are not going to have a garage. So, that’s when we had the idea to have a portable, removable battery pack.” There's a removable battery pack on each side. Each weighs 20lbs, meaning it'll be easy to carry them into your apartment for charging. Wes wants to find a better visual solution for the motor, something which aesthetically makes it a stronger mechanical component. Wes: “I do think there’s a sort of East Coast/West Coast mentality with this as far as the opportunity to use something like the Brammo Empulse. Maybe not in San Francisco maybe not in Portland, but in a lot of West Coast cities I wouldn’t want removable battery packs because they’re sprawl cities. But, in dense cities like New York or Boston, the removable battery pack is really attractive.” “It’s always been puzzling to me why there’s not a lot of small city bikes compared to what there was historically and what there is in the rest of the world. You’re really kind of stuck with vintage bikes if you want something small. Now, you only have scooters or stuff that looks like the Ninja 250, which doesn’t really look like what a bike for the city should look like.” “We’ve really been pushing the limits of how short we can get this wheelbase. It’s 52 and a quarter inches. That’s going to mean you’re going to be able to cut in and out of traffic and pull S’s through cars in midtown. This thing is designed to lane split.” “I’m pretty tall, but there’s a lot of people who have a hard time with the tall seats. Ours is 30 inches, you’re going to be able to put both feet down at traffic lights. It’s really light weight too, 230lbs. That’s great because you can just throw this thing around.” “I think Yamaha’s going to be the one that really pushes it on the electric side. When they come out, I think what they’ll have will be shocking. So, how do we survive when these big companies come out with an electric bike? We’re going to focus on the group of people they’ll leave behind.” “How do you get to motorcycleness? It’s a funny term, but how do we make this thing really a motorcycle and land there aesthetically? I don’t think you get there with a high-tech approach. There’s already circuit boards in your motorcycle, which is kind of strange. So, to make this thing a consumer electronic transportation device is not what we wanted to do with the aesthetic. We wanted to somehow weave it into the history of motorcycles, to bridge the gap between 110 years of motorcycle history and where we’re going.” “When I looked at it, I realized that new motorcycle are working in volume. A volume that’s been shaped and articulated in certain ways. But, if you look through the Gugenheim’s Art of the Motorcycle book, what you see in all those motorcycles is that they’re a collection of parts. Instead of being a slab sided volume, you have this part and this part and this part, often coming from different suppliers. That collection of parts has been put together in an artful way and that’s what makes the motorcycle that we think of when we think ‘motorcycle.’” “Look at the Brammo Enertia, which is about voume, then look at the Brammo empulse and you see them tracing back to a collection of parts, there’s more of a distinct identity which makes it look more like a motorcycle. That’s what I think Ducati has done so beautifully, they’re still a collection of parts with the steel trellis frame and you can see the motor.” “But, we don’t have an exhaust pipe, we don’t have carbs, we don’t have a cylinder head. We’re working with so little.”

The "tank" is actually a glovebox that has room for, well, your gloves as well as the fusebox and any other frequently accessed service items. Sitting on the bike, it's very short and impossibly slim. But, even at my 6' 2" height, it still feels comfortable. Jim: “There’s a lot of iconic elements that just aren’t available. So, we’re sort of forced to make a decision — do you sort of go off on a tangent and create something completely its own aesthetically or do you weave in the past? That’s what we’re trying to do.” Wes: “We plan assembly here in NY, in the same facility that will sell the bikes, here in Gowanus.” “We live here and we want to keep control of it. What we see with a new product line like this is that there’s a huge value in having the engineers shoulder to shoulder with the salesmen that are dealing with the guy they sold it to last week. If he’s got a problem, then the engineers can see the problem.” “From an evolutionary standpoint, our product will benefit from from that close relationship. The engineers, salesmen and customers will all be in the same spot, having the same conversation. What that will enable us to do is go from a good motorcycle to a really great city motorcycle really quickly. Really hit the niche perfectly.” “We are in a bit of a niche, targeting this urban consumer. If we were engineering it and styling it and selling it somewhere else or all in different places, then our ability to evolve and innovate would really diminish.” “Electric motorcycle are relatively easy to design. As we mature, we’re going to discover that we have the ability to come up with new bikes very quickly. That’s really exciting, because we have this freedom to come up with a product that only needs to sell a couple thousand instead of tens of thousands. So maybe we can have a product family of a moped, this bike and all different types that all fit Brooklyn and other cities really well.” “Designing a bike for the city, we’re addressing safety as much as we can. We’re going to have a headlight modulator, a strobe, which is something that was just recently legislated in New York. We’re also going to have a noise maker that you can active and deactivate. We’ve been kind of debating the baseball card in the spokes concept. Can you make tis noise mechanically or do you make it electronically? We haven’t decided, but I think we will probably have just one sound. It’s not going to be like a ringtone. When you here a Volkswagen Bug coming, you know what it is. I think there’s something really great in that.” Specs: Wheelbase: 52.25 inches Weight: 230lbs Wheels: 17 inch Seat Height: 30 inches Battery packs: two, 20lbs removable battery packs Charge time: one hour at 110v for 80 percent charge, 3-4 hours for 100 percent Range: 35 miles Top speed: 60mph Battery capacity: 2-2.75kWh Price: $5,999 plus a 10 percent New York tax credit Availability: Summer, 2012 Brooklyn Motorized
++
Got a tip for us? Email: tips@rideapart.com