This fist-sized lump of yellow metal is possibly the most convenient, best value and effective motorcycle security device available today. With one quick snap of a locking cylinder, the Xena XX6 physically immobilizes your bike and uses a motion sensor to sound a piercing, 120dB alarm should anyone monkey with it. That prevents and deters theft, all without hacking into a wiring harness, creating ...

This fist-sized lump of yellow metal is possibly the most convenient, best value and effective motorcycle security device available today. With one quick snap of a locking cylinder, the Xena XX6 physically immobilizes your bike and uses a motion sensor to sound a piercing, 120dB alarm should anyone monkey with it. That prevents and deters theft, all without hacking into a wiring harness, creating a battery drain or breaking the bank; all that costs just $65.

Disc locks themselves are something of an odd security device. We live in a world where law enforcement isn’t actually any good at catching or deterring thieves, but is remarkably efficient the second you park on a sidewalk so that you can lock your bike to an immovable object to prevent it being stolen. Even though most motorcycle thefts involve the bike being lifted into a van, truck or similar vehicle rather than ridden away, that still creates a need for a product that can provide some physical security when you’re parked away from home.

Because any thief capable of packing the powertools necessary to remove a lock quickly is likely also capable of bringing a van, I’ve never really looked at disc locks as needing to provide much in the way of actual security. To me, they’re more effective as a deterrent, adding a visible layer to your overall security system that hopefully sends prying eyes on to an easier target. You can never make a bike 100 percent impervious to theft, but you can make it a less appealing target than the bike parked next to you.

Used like that, the addition of the motion sensor alarm is a master stroke. Elevating a minimal layer of security into something much, much more effective. It’s also why I opted to buy this cheapest of Xena’s new XX-range of disc lock alarms; it provides the same deterrent and alarm as more expensive models in a more compact, more portable, but less hard to remove package. The money required to get a stronger disc lock would be better spent adding another layer of security in the form of a chain, ground anchor, cover, etc.

XX6 = 6mm locking pin. As you can see, that's still reasonably beefy and incredibly hard to access. A thief is going to have to try and cut that while a 120dB alarm blares in their ear.

All I’m looking for is the presence of a good lock and the effectiveness of that alarm (plus the ability to cart it around), so the fact that the XX6 only has a 6mm locking pin, as opposed to the 10 and 14mm items of the more expensive locks in the range is, in my opinion and in my use case, of little importance. You’re still going to need real powertools to get the thing off a wheel, the lock cylinder, for instance, spins in the lock body, making it drill resistant, the body is seriously chunky, the pin is a strong steel alloy, the lock is pick-resistant and ice-spray proof.

The XX6 is also remarkably perfect for my own unique security needs. Riding multiple press bikes in a given week or day and living in Los Angeles, I often need to park away from home with a bike not fitted with an aftermarket alarm. Press bikes come stock, which means, at best, there’s an utterly-worthless electronic immobilizer pegged to a chip key and a steering lock. Neither is going to prevent someone from stealing a motorcycle. But, with the addition of the Xena, I can add that alarm and immobilize a wheel.

The XX6 will fit over pretty much any brake disc. Chain bikes to the one with the alarm, and they’re all protected; the motion sensor is sensitive enough to detect any real movements or anyone touching it, without going off every time the wind blows. That allows us to have an alarm along on road trips. No more trying to sneak bikes into a dodgy motel room in the Utah desert, 120db is more than enough to wake us up on the other side of that hollow wood door. Heck, I can hear it inside my house, three room and two doors away from where I keep my bikes.

I first discovered Xena disc lock alarms 10 or so years ago. In fact, one alerted neighbors in London that one of my bikes was being stolen while I was away, allowing them to dash out and run off the would-be thieves.

That first-gen product was fairly effective, if a little low-tech. The stack of six button cell batteries ran out of juice quickly and was a real bitch to replace. Those batteries were hard to come by too. The lock lasted up till the first battery replacement after six weeks or so of use, then inexplicably refused to ever arm itself again.

The XX6 is several generations removed from that, however. It uses a widely-available CR2 Lithium battery that’s easy to install and lasts a claimed six months of daily use. An area of concern on that first gen product is also gone. Xena used to mount access to its alarm on the external side of the lock in a plastic body (the lock itself was still metal), something which didn’t exactly instill confidence in its longevity or ability to resist theft. Now, every part is metal and access to the alarm mechanism is through the side of the lock that sits inside your wheel. Attacking the alarm module would be relatively pointless, it’d still take minutes, the alarm sounding the whole while. 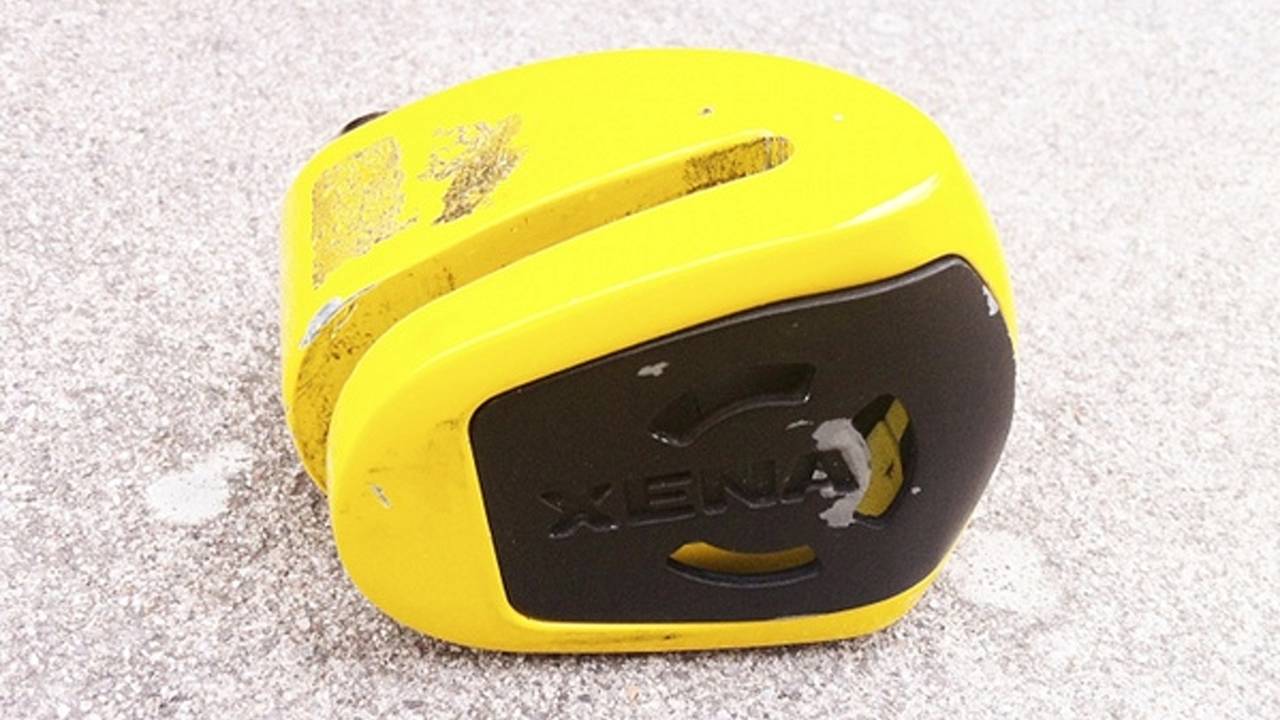 The alarm module is housed in the large, main lock body, but accessed through this metal panel on the base that can only be removed using a special tool when the lock is open.

It also adds an important layer of security at home. Thick chains locked to immovable objects provide great security, but I still want to know if someone’s messing with them. The Xena does that just as effectively as an on-bike alarm for way less money and, again, without hacking into the wiring loom or draining the battery. I put it on the wheel without a chain through it, making the bike that much harder to steal.

One area where the XX6 is less than convenient is in portability. Since most bikes don’t have underseat storage areas anymore and because it’s a terrible idea to carry a fist-sized metal object on your body (think broken bones and pulverized organs if it concentrates crash forces), you’re left needing to throw it in a tail pack or backpack. You can’t simply lock it around the straps on pillion seats, as that arms the alarm.

The arming mechanism works by bouncing a beam of light inside the main lock body off a reflector on the other side of the gap when you close the lock. If that beam doesn’t make it back because there’s a brake disc or whatever in the way, the lock beeps to confirm arming after five seconds, then arms itself after 10. After that, any motion will trigger it and it’ll go off for a good period of time before checking to see if it’s still being moved. The only way to disarm it is to open the lock with the key.

Available on Amazon and other websites for around $65, there’s really no reason not to buy and then use the XX6 every time you park your bike. That’s cheap insurance against theft and a nice reassurance that you’ll be alerted should anyone try and steal your bike. I sleep better at night knowing my motorcycles are safe.

You can read more about motorcycle security here.