Top 5 Uses of a Harley Engine 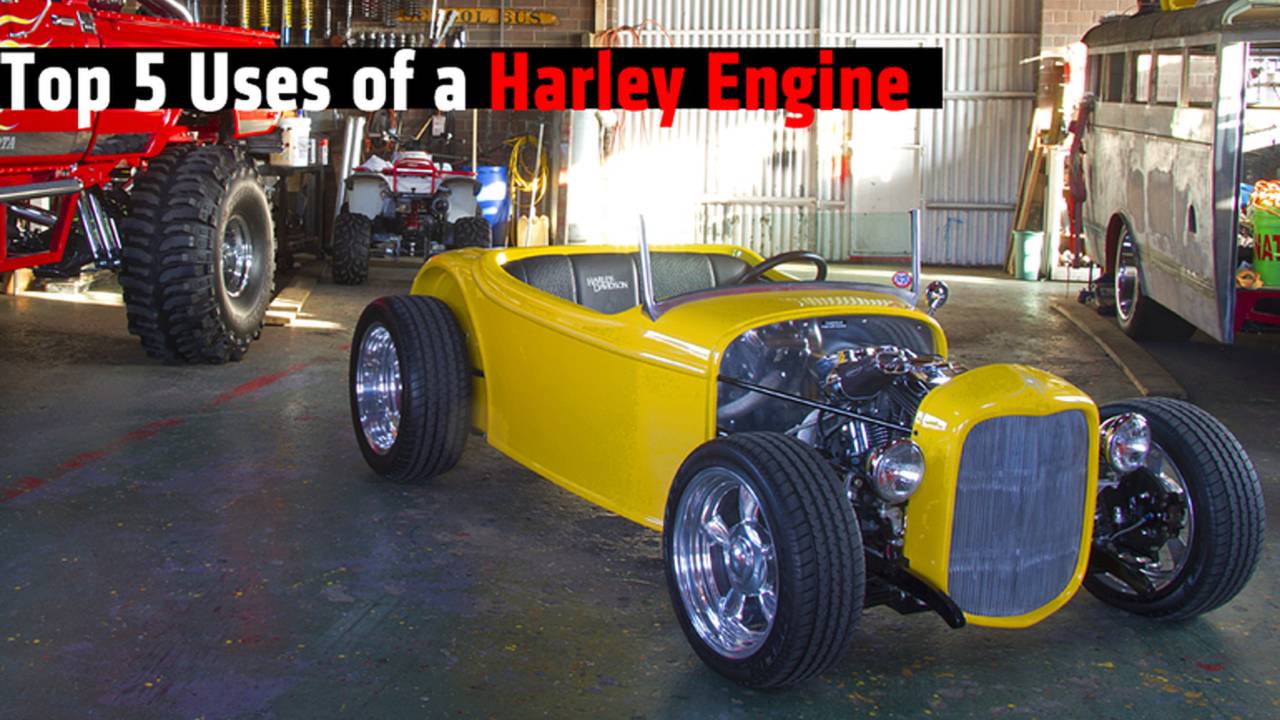 Top 5 Uses of a Harley Engine Now, I like Harley-Davidson engines. Those big thumping V-twins make plenty of torque and if set up right make for...

Now, I like Harley-Davidson engines. Those big thumping V-twins make plenty of torque and if set up right make for awesome long-distance engines. Yes, some are unreliable, but they're easy to work on. We've wandered around the Internet this week and found our top five favorite, unique uses of a Harley-Davidson engine.

Built by the appropriately named Kick Ass Rod Shop in the mountains of North Carolina, this little roadster is a 3/4-scale of an original 1932 Ford Roadster. Built by shop owner JR Drake, it's powered by a 1,200cc Sportster engine. He started with a Downs Industries fiberglass body that he sectioned, chopped and narrowed four inches.  “It’s basically a Sportster on four wheels,” said JR.

It's a cool little roadster, and appropriate that it's only a 3/4 of a full size car—everything seems to make more sense at this scale. JR used a transfer case from a Legends race car that accepts the belt drive from the engine and a driveshaft to a Toyota rear axle. He mostly built the four-link rear suspension and Mustang II front clip himself.

Mount a Harley engine in a Prius… or at least on a Prius. Built by the Hell’s Treehuggers, the Harley-Davidson-engined Toyota Prius raced in the 24-Hours of Lemons races last year and recently went up for sale.

The guys took an old rent-a-cop Prius and mounted a chain-driven Sportster 1100cc that runs throughout a transfer case to a welded differential out back. Check out build photos here.

Apparently, it's a better airplane engine than you'd think. The Twin Cam 88 produces more torque than any other engine in its class. No need to route water cooling hoses, no need to heat the carb, and it cruises around 3,800 to 4,200 rpm, resulting in 3.5-4 gallons per hour.

Mount two Harley engines and put them in a super car. Car builder Sundoulos decided to build an exotic car to compete against Vipers and Corvettes in Grand Am endurance races, when the series changed its rules outlawing the original twin-turbo V8 power plant and car. The guys had already made a lot of progress on the SportStar, so they decided to continue with the production, using a twin Harley engine and unique transfer case.

It was a weird design, and probably didn't work out well with two air-cooled V-twins mounted in the rear of the car. Since the construction of this power plant the SuperStar's engine has been replaced with an LS1 V8.

There are three things that will always ruin your wallet: motorcycles, women and boats. St. Martin Power Boats took one of its standard two-person, 600 pound capacity boats and mounted a Harley-Davidson Evolution 88ci engine in the back. Since the air-cooled engine isn't in the air, they built a custom water cooling system. The boat starts at $29,995.

Sound of it running is after the 1 minute mark.