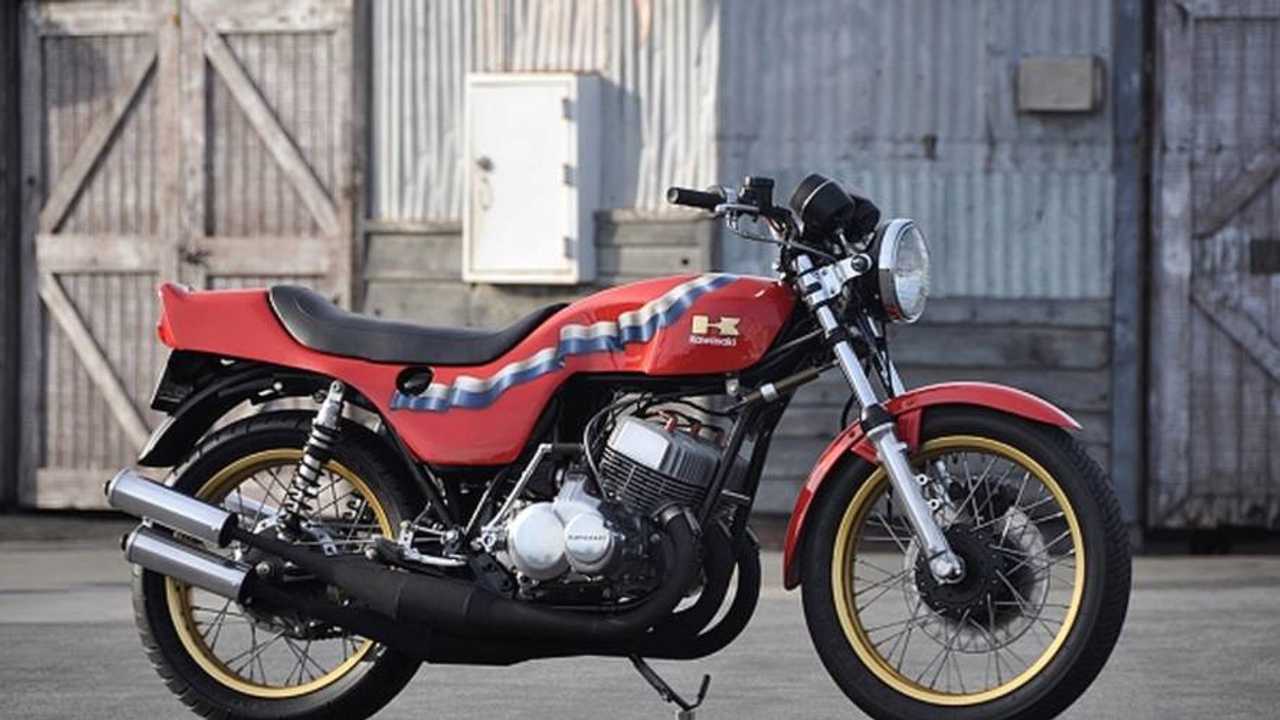 What is a cafe racer, anyway?

Appropriate, ain't it, that a two-stroke with a trio of angry expansion chambers should incite a hornets' nest of online commentary? It started innocently enough – me sending snaps of my 1970 Kawasaki H1 cafe racer to BikeEXIF, but it wasn't long before the boo-birds started flingin' feces. The Kawi's period-correct Tracy bodywork, a one-piece fiberglass tank/seat/fender structure, got smeared the most. The main argument seemed to be that this H1 simply didn’t qualify as a cafe racer due to the lack of clip-ons and a bullet seat. That begs the obvious question, what exactly is a cafe racer anyways?

"Solid bones but please remove that hideous bodywork!" implored one comment. "A fad that has obviously not withstood the test of time," said another. "That bodywork is absolutely disgusting and completely ruins the wonderful lines of the H1," stated a third.

In the 1970s, before Edwards' ownership, the Kawasaki was Production-class roadraced, even saw duty at Daytona. Now with Tracy bodywork it's a period cafe racer...oops, sorry, make that a period "American-style" cafe racer.

To be fair, many complimented the bike and its Age of Aquarius vibe. Bigger picture, though, some argued that the H1 was not even a "proper" cafe racer, mainly because its low-rise tubular handlebars weren't Marquis de Sade enough. Reader Steve, apparently an Ace Cafe original from Jolly Olde, led the charge.

"Cafe racers first appeared in the U.K. in the late '50s, were road-going copies of clubman racers with ace/clip-on bars and rearsets, abbreviated mudguards and noisy exhausts," he stated.

"Touring bars on racers were strictly U.S. practice, and cafe racers did not originate there. I don't need to look at period pics, I was there."

"Cafe racers were a fashion, ridden by Rockers, also a fashion. They both had rules of appearance and behavior. The Rocker dress code went pretty much as follows: pudding basin or no helmet, chin rag, black leather jacket, badges and studs optional, heavy denim jeans, knee boots over thick white socks. For bikes it was low bars, ball-end levers, sweptback pipes with meggas, rearsets and skimpy mudguards. Bumstop seats were very acceptable, unless your sex life involved other people you might wish to pillion. Comfort and practicality were not considerations. We didn't have highways, had lousy tires and brakes and broke down or fell off regularly. Quite a few of us got killed. That scene was pretty well all over by 1967. So that's cafe racers, guys: take it or leave it."

My friend Mick Ofield, a transplanted Brit, was in on the tail end of the Rocker craze, still rides a Norton Commando indecently fast in vintage roadraces, and confirms that no self-respecting "caff racer" would be fitted with anything but clip-ons or ace bars – standard handlebars mounted upside-down to mimic clip-ons. A talented artist and designer, Mick has done a series of line drawings that includes several cafe-racers (that's his Manx Triton illustration leading off this story; to order prints or commission a drawing contact Mick at ofieldtn@blomand.net), and recalls the bits that gave the bikes their flash.

Paul Dunstall was among the first to see the commercial aspect to cafe-racers. With the Brit bike biz going tits-up, he moved on to Japanese multi-cylinders – which to the crowd at the Ace Cafe must have been akin to Dylan going electric.

Appreciate the coda, Steve, and I get where you're comin' from. You guys were the originators – go-fast innovators who came up with the first repli-racers 30 years before Suzuki's GSX-R750 was born. Good on ya. You paid the price, too, in blood left on the asphalt, either from crack-ups or being set upon by squadrons of angry Mods on their circus-wagon Lambrettas. You say clip-ons do a proper cafe racer make, I'm onboard with that. Not going to fit the H1 with 'em, though. To me, low bars only make sense on a racetrack – or maybe flat-out in the pouring rain on London's North Circular Road trying to make it back to the Ace before "House of the Rising Sun" stops playing on the jukebox.

But need the definition remain stagnated in the 1960s or could the fundamental principles of that original movement be what’s really important here? Can what made cafe racers special then be applied to motorcycles that are fast today?

BikeEXIF’s Chris Hunter doesn’t qualify a period or type of handlebar, simply saying, “The cafe racer is the sweet spot of form and function. Less is more.”

To which we’d like to add something of the original spirit. Someone riding a Manx Triton to the Ace Cafe in 1967 wasn’t doing so out of some sort of devotion to a bygone era or the kind of bikes his dad rode. He was riding it because it was the absolute fastest thing on the road. The closest thing he could buy to what was going around race circuits that weekend. He was riding it because it was fast, dangerous and because it pissed off his parents.

That "absolutely disgusting" H1 with the "hideous" bodywork was a production roadracer before it was my road bike. It’s also a motorcycle pared back to its essence, Tracy bodywork or no. No parka-wearing scooter rider has ever duffed up The One Armed Bandit of New York’s Fastest, but his S1000RR also seems to fit the racer-for-the-road, essentials-only cafe racer mantra. It too is a machine built solely to go extremely fast and leave blood on the asphalt. Is there a difference between this BMW and an old Triton other than era? And is that difference aesthetic or is it mechanical or because one traveled down a modern production line?

The problem is, this raises a further question. Are cafe racers about simplicity, purpose and going as fast as possible or are they about style? Do we prefer to remember cafe racers for what they were or learn something from what they taught us? Can a cafe racer be more than a memory?