RideApart Review: Star BoltYamaha's cruiser brand, Star Motorcycles, is releasing a new bike at the end of month with its sights set directly on...

Yamaha's cruiser brand, Star Motorcycles, is releasing a new bike at the end of month with its sights set directly on America's best selling motorcycle, the Harley-Davidson Sportster. By pairing Sportester-esq styling with Japanese-quality components, they may have a real winner. So long as they can convince the 20-35 year olds of the world that a bike's ability to progress down a road at faster-than-walking speeds is more important than the name printed across the gas tank, that is. I got to ride the Star Bolt around San Diego earlier this week and I have to admit, I liked it.

The Star Bolt is a brand new motorcycle, with a release date set for the end of April. The engine is the same used in the V-Star 950 and 950 Tourer, but other than that most of Bolt is all-new and was designed to specifically fit the modernized-Sportster aesthetic the designers were going for.

The Bolt finds its home in the Star lineup between the 650cc V-Star ($6,990) and V-Star 950 ($8,590) and will retail for $7,990 for the standard version, $9 cheaper than Harley’s Sportster. In July we’ll see the release of the Bolt R-Spec, which adds a matte grey and army green paint scheme, black mirrors, some suede like material on the seat, and remote reservoir rear shocks with a $300 increase on the price tag to a whopping $8,290.

The engine is an air-cooled, 60-degree V-twin with a Mikuni injection system that uses 3D mapping and a closed loop design which means that the Bolt will monitor itself and be easy to start, regardless of temperature and elevation. Star didn’t have horsepower figures yet, but claim the 942cc engine makes 58.2 ft./lb. of torque at 3,500rpm. The butt dyno put the engine on par with a stock Sportster and slightly better than Honda’s 750cc Shadow.

The similarities with the Harley stopped with power, with the Bolt feeling more polished in every other aspect. The 5-gear transmission, with its straight cut gear dogs, was very light and smooth. The 61.8-inch wheelbase and 27.2-inch seat height made the Bolt both easy to swing a leg over and easy to turn, especially when compared to its competition. I found the riding position very natural, as did other journalists both a few inches shorter and a few inches taller who were riding the Bolt with us that day.

The KYB 41mm front forks provide 4.7 inches of travel and, while not impressive when compared to more performance-oriented motorcycles, they managed to keep my heart rate at normal levels when I decided to ride roads that didn’t just travel in a straight line. The rear KYB shocks only allowed 2.8 inches of travel, but do feature preload adjustment. I would have liked a little more cushion on the back and, while the R-Spec anodized remote reservoir shocks look nice, neither the standard nor R-Spec models really provided much comfort over dips and potholes. Keeping the Sportster in mind, I was able to temper my expectations and realize this is something you just kind of have to accept with this style of motorcycle.

The 12-spoke wheels looked very nice in person and the 19-inch front and 16-inch rear tire were adequate for both around town and short freeway stints. The 298mm wave-type brake rotors (two piston in the front and single in the rear) worked better than expected and gave me far more confidence to enjoy the torque of the engine, knowing I could stop should the need arise. 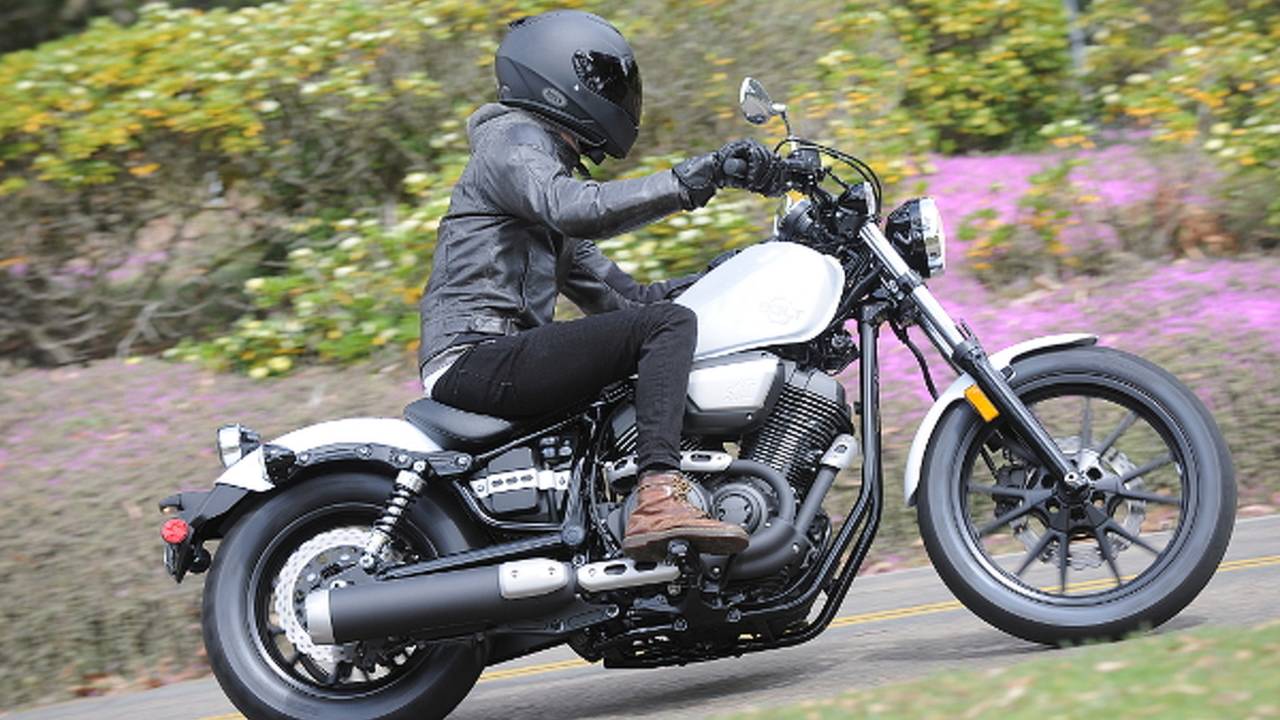 The Star Bolt is a road-ready, fully capable, safe motorcycle. That statement right there sets it apart from its biggest competitor. All the fancy stuff in the engine ensures the Bolt will start and run well in any conditions, and that the engine will be durable and last for a bunch of miles. What more could you ask for?

The most impressive part of the presentation they gave about the bike was in their inspiration for building it. They really seemed to understand a lot of what made our generation tick and what drew us to certain bikes and they built their goals accordingly. The Star Bolt was an attempt to simplify, to get back to basics, to understand that less can be more (compared to “the more chrome and crap, the better”), to be easy to buy/easy to ride, and that performance and quality and the ability to make things your own matter. They wanted it to give you confidence the day you sat on it in a showroom and every day you got on it to ride. They built inspiration boards that look shockingly similar to my pinterest wall and then threw all of those goals and aesthetic guides into a blender a made a really nice basic platform.

At $7,990, it’s hard to ask for more than decent stock power, solid brakes, capable suspension, and classic looks. At 540 pounds full of fuel, the bike feels lighter than it is and is easy to maneuver, both when being walked into a parking spot or ridden down the road. The Bolt feels nimble and does at good job at filling the “urban performance bobber” role Star motorcycles was trying to meet.

With the release of the Bolt, Star is also releasing 50 or so different parts that can be used to customized the bike. I was expecting ugly chrome pieces to ruin the bike’s aesthetic, but I was able to pick out a lot of things I would absolutely add if building a Bolt for myself. Some of the things like the leather saddle bags look a little cheesy, but the brass accents are some of the coolest things I’ve seen available for any motorcycle. They had some of the parts on one or two of the bikes when we first arrived and they beautiful in person. Many companies have tried to do this in the past but none have succeeded like Star has here. 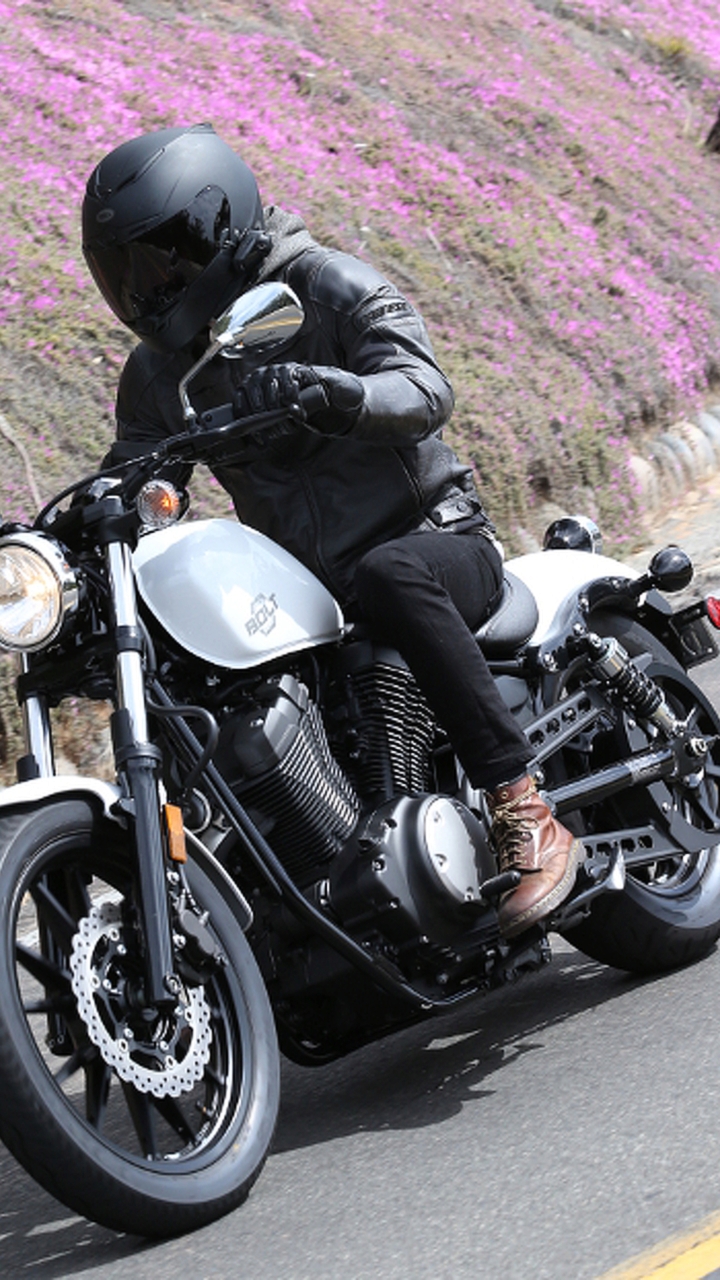 Other than the Star Bolt being a fairly basic motorcycle and being a cruiser (both were intentional and therefore can't be held against it), I couldn’t find much fault with the bike. The rear suspension could be more comfortable and the smoked glass over the digital speedometer was too dark for the gloomy day we had, but my only problem other than that was that the fonts used for the “Bolt” and “Star” logo are terrible. The Star one isn’t really their fault as it’s the brand logo instead of the model, but even Harley uses different fonts to fit different bikes. There’s just no excuse for putting that much thought into a bike and then plastering the name in a terrible font on the side of the tank. One guy said it was under the clearcoat and another said it was just a sticker, either way both logos are fixable with minor effort.

Any further fault I find with the bike has to do with it not being as light as a WR250R, not having the brakes of an R6, or the suspension of a Super Tenere.

I did turn into a bit of a wind sail on the freeway above 70mph or so, but I can’t really hold that against a bike that they claim is good for urban riding. It'll do freeway speeds just fine, it just wasn't the intended purpose. The motorcycle left me utterly unimpressed upon first riding it until I remembered that it was designed to be better than a Sportster and to be really affordable. Check and check. 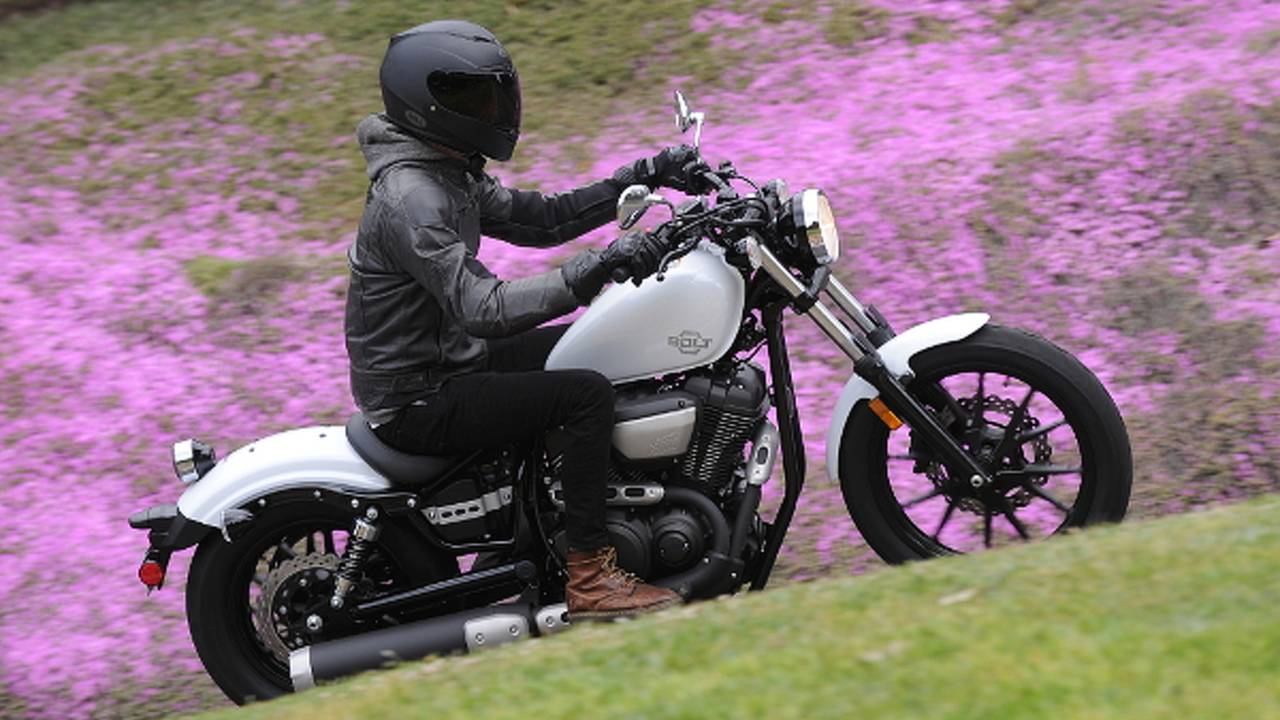 "...the Iron 883 is so punishing it should come with a bar-and-shield branded kidney belt, standard. Star addresses the issue with twin KYB shocks under the seat that offer 2.8” of travel. Granted, that’s not a lot of room to bounce, but the shocks are pre-load adjustable and besides, the stubbed springs are necessary to maintain the bike’s low seat height and center of gravity. And they work just fine.." — Motorcycle.com

Star set out to make a Sportster that turned and stopped and was fun and safe to ride at proper speeds and I think they more than met their goal. The real test will be if people in this market think the upgraded performance is worth having the words “Star Bolt” on the side instead of “Harley-Davidson.” Buying a motorcycle isn’t always a purely rational decision, but I think the Bolt hits on enough areas that buyers will have to pause and give it a lot of thought. It should be a nice competitor and will hopefully continue to drive development in this class of motorcycle, something that is good for all of us as consumers. I’m curious to see what adding exhaust and tinkering with the air box and fueling would do, if the results were anything like I got on my Bonneville this thing is going to be amazing.