We have the first spy photo of the 2015 KTM 390 Supermoto. Based on the KTM 390 Duke, the Supermoto appears to share the same engine, swingarm and frame.

A member of KTMForum.eu has captured this first spy photo of the 2015 KTM 390 Supermoto. Based on the KTM 390 Duke, the Supermoto appears to share the same engine, swingarm and frame, adding a dirt-style seat, taller suspension and higher bars.

We first learned about this new bike in an interview KTM CEO Stefan Pierer gave CycleNews in April. In it, he described, “A so-called dual-purpose or dual-sport version… which I would say is a mix between supermoto and enduro.” He went on to explain that like the KTM RC390 and Duke, these new bikes will be made by Indian production partner Bajaj.

All three models weigh about 306 lbs (dry) and develop 43 bhp and 26 lb.-ft. from their shared 373cc, liquid-cooled single-cylinder motor. Both the Duke and RC are allegedly U.S.-bound, but on-sale dates and prices have not yet been announced. Complete, the trio represents a frontal assault on the beginner bike market, all three are faster, more appealing and just as affordable as any other motorcycle in the class. 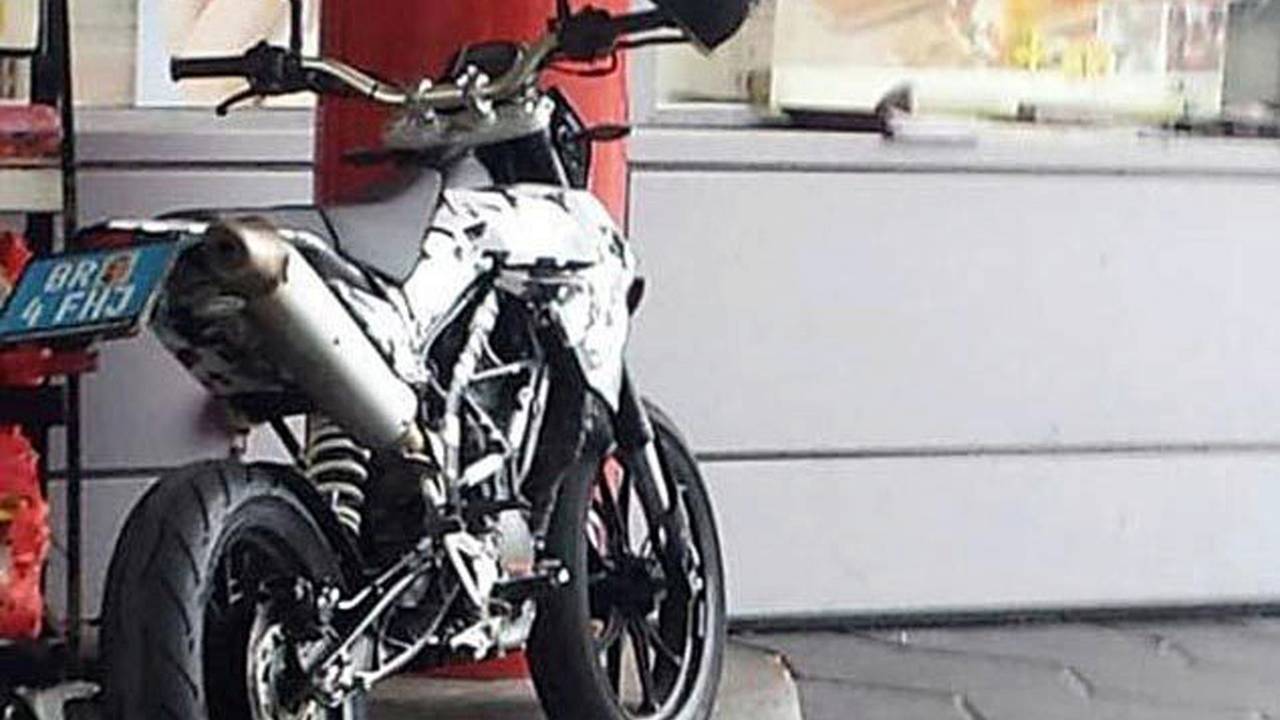 Like its platform mates, the 390 Supermoto is equipped with a visually prominent steel trellis frame and an aluminum swingarm with exposed webbing. Together with relatively high quality (but unadjustable) suspension, decent brakes and angular design, the bikes leave behind the budget look and feel of most beginner bikes, elevating themselves to the realms of genuine desirability, regardless of engine size.

In other markets outside the U.S., 125 and 200cc versions of all three models will also be available.

It’s not currently known if the Supermoto will be joined by a matching Dual-Sport version fitted with larger diameter, spoked wheels, but that’s the model we’re most hopeful for. Such a bike would be a blast to ride in the city — like this Supermoto — but good off-road, too, where it would benefit from much lower service requirements than existing dual-sport KTMs.

Of the three 390s, which are you most excited for? Supermoto, Duke or RC?