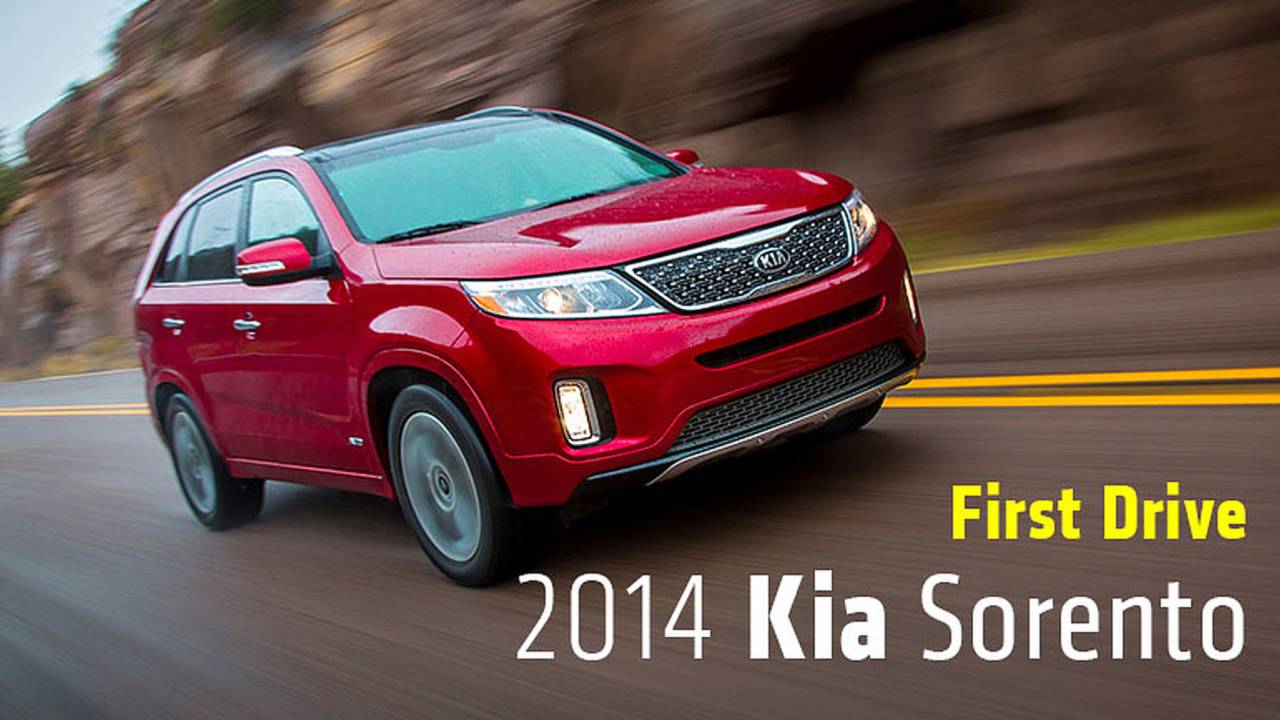 The 2014 Kia Sorento represents a thoroughly refreshed edition of the mid-size SUV that's been rolling off the U.S. assembly since the 2010 model year.

A decade or so ago, when the Kia Sorento made its debut, Korean vehicles were way down the list for consideration for most buyers. Driving a Kia or a Hyundai marked you as cheap, or dumb—or both. That perception has changed in a big way, and now Kia vehicles are in the mix with the best from domestic, European and Japanese competitors.

The Sorento is Kia's biggest current SUV. It's a unibody crossover vehicle—no separate frame. And it is surprisingly capable and elegant, with a vast array of standard features, even on the base model. But is it a vehicle that a motorcyclist could love—and live with?

The 2014 Kia Sorento represents a pretty thoroughly refreshed edition of the mid-size SUV that's been rolling off the assembly lines in West Point, Georgia (that's in the U.S., by the way) since the 2010 model year. Sorento wears a new front fascia with upgraded headlamps, including trendy LED positioning lamps on higher trim levels. LED elements have also been added to the taillamps, and the rear fascia has been redesigned. The interior has been sharpened up, with a new dash, instrument panel and some near-luxury features available, like ventilated seats for the driver and front passenger.

The significant change, though, comes where it counts—under the hood. Two engines to choose from: a 2.4-liter inline four-cylinder and a 3.3-liter V6, and each one is built around gasoline direct injection (GDI). GDI is the next stage in the evolution of fuel management for gas engines. By vaporizing fuel and shooting it directly into the combustion chambers, it allows engines to extract more energy from gasoline (compared to conventional fuel injection or carburetion), resulting in increased power output and higher fuel efficiency. This is good news.

You might not immediately think of the Sorento when you make a list of tow/haul vehicles. But for light towing mixed with every day driving, Sorento might just do the trick. The four-cylinder Sorento is rated to tow up to 1,650 lbs—certainly enough for a lightweight single bike trailer. The V6 Sorento is rated at a robust 3,500 lbs. Either vehicle will need to be outfitted with an optional ($400) tow hitch to be useful.

Cargo capacity is just what you'd expect from a mid-size SUV. Don't bother with the optional ($1,200) third row seating package unless you come from a family of tiny contortionists. With the seats folded down, Sorento can haul up to 72.5 cu.-ft. of cargo; with the second row in place, there's 36.9 cu.-ft. of space available. If you get the third row (but didn't I just tell you not to bother?), there's 9.1 cu.-ft. of luggage space in the back. Curb weight is between 3,594 lbs and 3,894 lbs, depending on vehicle configuration, and payload is close to 1,600 lbs.

Two engines are available for Sorento:

Sorento was already a decent-driving SUV, and it's even better now with the new engine. Kia claims to have improved overall vehicle stiffness by 18%, which has added a new crispness to the ride. Four wheel independent suspension (struts in front, multi-link in rear) and stabilizer bars deliver a pleasantly controlled ride. If I have any complaint about Sorento's ride, it would be the slightly numb steering feel. Kia switched over from hydraulic power steering to electric power steering this year, and it could use some fine-tuning.

Acceleration from the new engine is satisfactory. My test vehicle had the V6, which would be my engine of choice for Sorento. There's very little fuel economy penalty versus the smaller four-cylinder engine, and a modest (about $1,600) upcharge. If you're going to be towing, you'll appreciate the additional 100 horsepower.

My test vehicle was a 2014 Sorento EX, base price $31,800 - $36,550 as tested. As always, Kia has built Sorento with a surprising amount of standard features, making the value proposition a pretty good one.

Mid-size SUVs are in a no-man's land in the marketplace right now—compact SUVs are hot, as are genuine seven-seaters. But as a genuine light-duty towing vehicle that has to also perform as a daily driver, mid-size is a class you don't want to overlook. Sorento doesn't have the class to itself, by any means. Right across the corporate sibling aisle is the Hyundai Santa Fe Sport (built on the same production line in Georgia). Toyota's Highlander, Ford's Escape, Subaru's Forester and others claim similar towing chops and come in at comparable prices.

Kia has carved a niche with attractive exterior design, a generous set of features and an improving reputation for reliability (not to mention a 10-year/100,000-mile powertrain warranty). Sorento might not be a heavy-duty towing option, but it's a very good option for many tow/haul jobs.