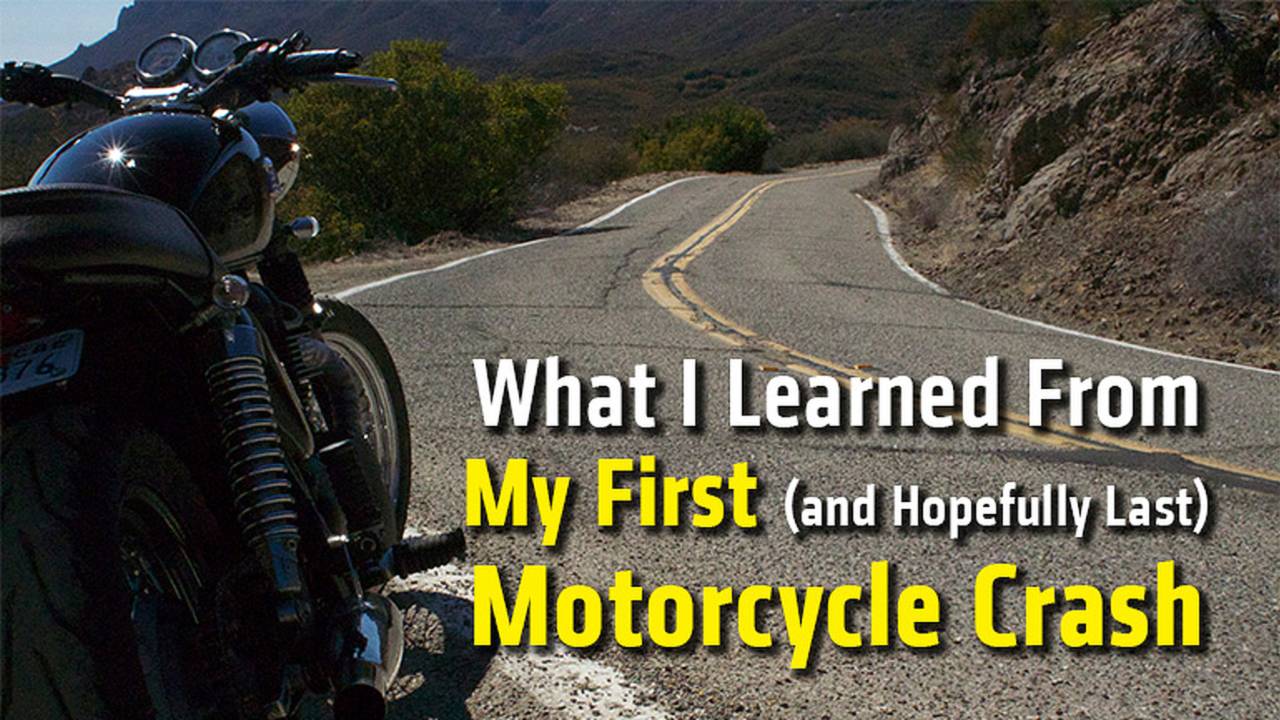 This summer, I had my first motorcycle crash. I decided to make it an opportunity to become a better rider. Here’s how...

It was a beautiful summer day. I was on my way up to Santa Barbara to meet a buddy of mine and see my favorite band. Since the weather was so great I decided exploring was on the menu. Before taking off I made sure my bike was in working order, phone was charged, water bottle packed and that my friend knew I was hitting the road. I was ready for a mini road trip, complete with a detour into uncharted territory. Long story short, I ended up on a canyon road that was in disrepair. Instead of turning around when it became apparent that the road condition was deteriorating I kept going. In the middle of a very sharp corner I hit a patch of gravel concealed by the shade and dumped my beloved 2009 Triumph Bonneville. I was alone, without cell service, at the top of a desolate canyon in 100 degree heat and had just crashed my motorcycle for the first time.

Since my accident I have replayed it in my mind many times. I have thought about what I could have done differently, what I did right and how to prevent the same thing from ever happening again. To help provide more insight into my own mistakes I asked MSF instructor and RideApart contributor, Braden Poovey about typical first wrecks and how best to learn from them.

After discussing my accident with Braden, my suspicions were confirmed. My crash falls into the category of typical new rider wrecks. As Braden put it, “If I were to nail down one particular type of mistake new riders make (especially if we're talking about sport riding in the mountains), I would say poor judgment in cornering speed and target fixation. Sometimes the target isn't big like a car or a guardrail, but rather a sharp pothole or a bit of gravel. It's amazing the insignificant stuff you can hit with expert ability when you don't want to hit it but keep looking at it. Poor judgment in corning speed is just that. New riders often want to hit corner entry as hard and fast and possible and try to throttle through. If they overestimate too much, they have to chop the throttle (upsetting the bike's suspension and making things worse), or brake and potentially have a low/highside.”

The cause of my accident is abundantly clear: operator error, pure and simple.

The importance of proper preparation cannot be stressed enough. Although before leaving for my ride I made sure to check my bike, wear proper safety gear, and pack a tool kit with all the essential tools, I overlooked one vital step: route preparation. Being from Southern California, I am very familiar with the route from Los Angeles to Santa Barbara. What I wasn’t familiar with was the canyon I decided to explore. Had I done an extra ten minutes of research I would have found this video which describes the road as a “bumpy and tangled strip of asphalt.” That description alone would have been a red flag letting me know Yerba Buena Road might be a stretch for my skill level at the time.

Lesson learned: having the right gear is great but avoiding unnecessary risk by doing your homework is even better.

After about five minutes on Yerba Buena Road I thought about turning around. I had not anticipated that the turns would to be as sharp as they were, or that the road might not be in the best condition. Feeling adventurous, I continued on my way, deeper into the canyon. Looking back this was my point of no return. I had a gut feeling, disregarded it and decided to try my luck.

Lesson learned: No matter how adventurous or excited you are, it’s not worth it. If the little voice in the back of your head is sounding the alarm, listen.

Don’t push yourself too far:

This goes hand-in-hand with trusting your gut. You are the only one with intimate knowledge of what you can or cannot handle. If you are feeling out of your element, take a moment and ask yourself: is the risk really worth the reward? I’ll give you a hint, it almost never is.  While pushing yourself a little bit past your comfort zone can be beneficial, going way past it can be catastrophic. In my case, it was hot, I was excited about the concert I would be attending later that night and I pushed myself too far. I put myself in a situation that I never should have been in.

When I asked Braden about being aware of your physical limitations he had his own personal example, “There was one time in particular where I had taken a trip by myself (normally I ride with one or two others) and was exhausted from lack of sleep and a heavy meal. I kept getting that feeling of riding over my head and ignored it. I ended up misreading my turn speed and almost drifted into a car in the other lane around a blind corner. It happens. The only thing we can do is learn from it, and be aware of our limitations (physical/mental) and be willing to cut a ride short or rest regardless of the pressure to finish.”

Continue Reading: What I Learned From My First Motorcycle Crash >>

If I did one thing right the day of my crash it was staying calm. Almost immediately after going down an overwhelming sense of dread came over me. I was in an unfamiliar place, it was over 100 degrees, I had half a water bottle in my bag, my bike was on its side in a small ditch and my cell phone had absolutely no service. Something in my brain clicked and I went into what I can only describe as survival mode, or as Wes called it in his article 10 Things I’ve Learned From 10 Motorcycle Crashes, The 15 Minute Superman. The only thought running through my mind was that I had to get down the canyon and onto PCH. I summoned the strength to get my bike upright, out of the ditch and back onto the asphalt. Once this task was complete I assessed the damage to my bike and my body. Luckily I was fine, nothing broken, nothing bleeding. I couldn’t say the same for my bike. The clutch lever was broken clean off except for about an inch, my shift lever was broken in half and when my bars were at 12 o’clock my front wheel pointed towards 1:30. I checked my phone one more time, made sure there were no fuel or oil leaks and then started my bike up. Luckily it came to life almost immediately, I put the bike in gear with my hand and headed down the canyon in first at a snails pace.

I got lucky in the sense that my bike was still operational and I was not hurt. Obviously this is not always the case with accidents and we must use our best judgment in those situations. If you are injured or your bike is not safe to operate, do not try to ride away from the accident. Walk away and leave the bike where it is—if you are able to walk, that is.

Lesson Learned: When it comes down to it we are all capable of handling high-pressure situations. Just remember to stay calm and the clear thoughts will usually follow.

“Learning from your first wreck can be really liberating, and provide some catharsis if you've had a particularly bad one,” says Braden. “Better to go over every little nuance you remember to fully understand what happened rather than staying in confusion and never really improving your skill.”

Before my first crash, if you asked me about preparation, trusting your gut, knowing your limits and staying calm, I would have been able to give you all the right answers, but it took crashing my motorcycle for the first time for me to internalize those lessons.

Admittedly I got very lucky, I escaped with nothing more than a damaged motorcycle and a bruised ego. Looking back my ego needed some bruising. Not to say I was an overconfident maniac terrorizing the streets of Los Angeles but rather I was a newer rider who needed to be brought back down to earth and reminded that riding a motorcycle is a dangerous, skill-based activity.  And skills are developed over time. In my opinion, there is nothing more dangerous than someone who believes they have nothing more to learn. It is certainly a shame that at one point or another we all have to learn new lessons by going down but we all know it comes with the territory.  The only thing left to do is get back on our bikes, acknowledge what went wrong and keep doing what we love, albeit maybe a little bit differently than before.

What did your first wreck teach you? What piece of gear saved your bacon when you went down?