Dani Pedrosa On IndyI had a chance to sit down with 2010 and 2012 Indianapolis MotoGP winner Dani Pedrosa, who is currently second place in this...

I had a chance to sit down with 2010 and 2012 Indianapolis MotoGP winner Dani Pedrosa, who is currently second place in this year's championship, 16 points behind his teammate, phenom Marc Marquez. Pedrosa crashed and broke his collar bone last month, during qualifying for the German Grand Prix. He missed that race, but came back for the next MotoGP round, which was held at Laguna Seca and where he fought through the pain to finish fifth. Here, he talks about MotoGP technology and what it's like to ride at this level.

Nick: What are your goals for the second half of the season?

Pedrosa: Pretty easy--my goal is to try to win as many races as I can, and when I can't do it, try to be second, and keep up with the maximum points I can every race. This is basically my goal.

Nick: What is your favorite part of the track at Indianapolis?

Pedrosa: I like the back straight, and also the first corner.

Nick: What do you think about the surface at Indy? There are little grooves everywhere.

Pedrosa: It's not the best one, but I enjoy riding here.

Nick: How far has the electronic engine management systems come since you started MotoGP?

Pedrosa: A lot. Now there are many more tools. Before it was some tools. Basically the big, big change was between two-stroke and four-stroke. The four-stroke engine needs some controls, because it is fuel-injection, so all this needs control. Plus, when we changed from spring valves to pneumatic valves, this also needs a lot of control.

Nick: What's it like riding with the seamless gearbox?

Pedrosa: It's just like the standard gearbox, but the feeling is a little smoother. Between the gears, the jump is not like "stop, accelerating," it's more like if it was one gear. You feel the shift, but at the same time the suspension doesn't move a lot like when you have a standard gearbox.

Nick: What area of the RC213V has the most room for improvement?

Pedrosa: Entry in the corner, and edge-grip on the tires.

Nick: What mid-corner inputs do you use to change the attitude of the bike?

Pedrosa: Angle, body-positon, weight distribution--more forwards, more backwards--throttle, rear brake. These are the tools I use most for adjusting. 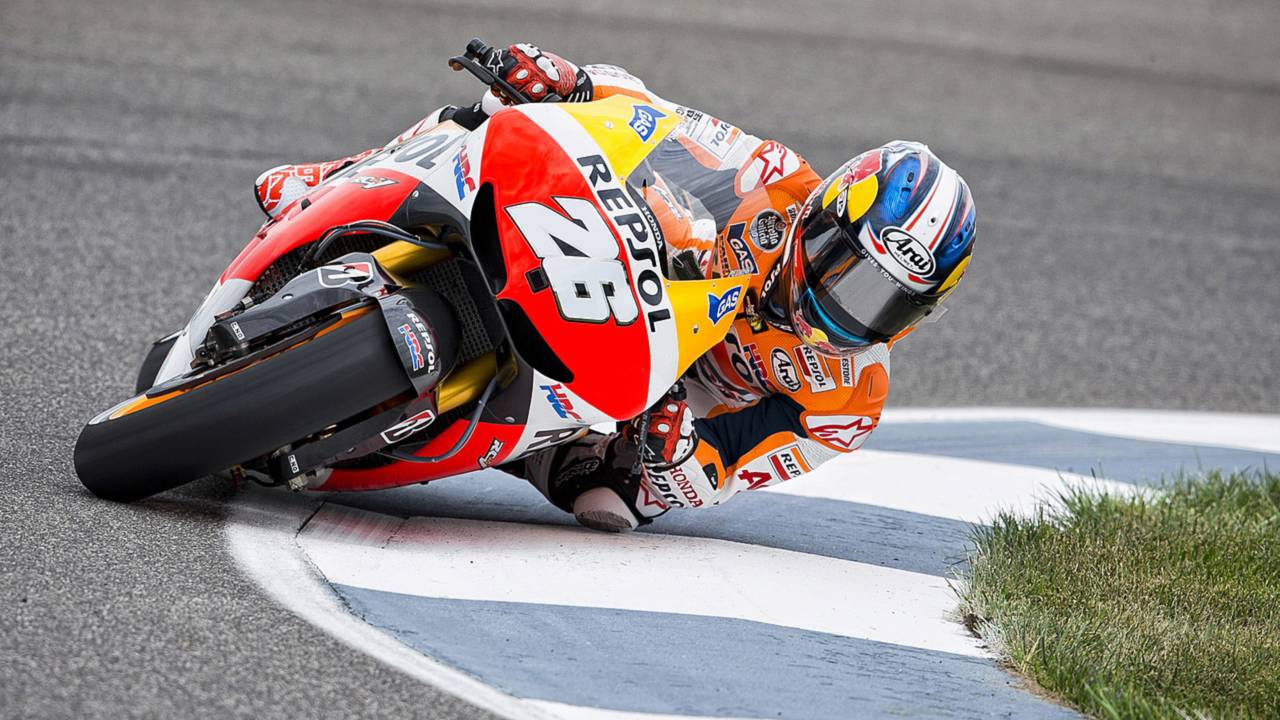 Nick: We talk so much about bike development, but as a rider are there things you do to work on improving as a rider?

Pedrosa: Every year I try to improve some skills and I try to refresh some old skills, and also try to adapt. This championship looks like it's the same, but every year there are new riders coming with new skills, and you have to try to adapt, to try to change a little your style. Not every time, but in some races you do one thing that someone else is doing differently to get a better result. Sometimes you use your own natural skills, but sometimes you have to adapt--depending on the track, bike behavior, or weather.

Nick: Did you have a riding coach to help you learn to ride at this level?

Pedrosa: I've been doing it (riding) since I was a kid. So no, not normally. I have some people who work with me who I have known for a long time. When I go training and I try to improve some skill or get a new skill, I am practicing. I ask how it looks "it's correct, it's not, it is too late, too early, too much..." these things. But actually the feeling is the guy who is on the bike.

Nick: There is no in-helmet communication in MotoGP, but what sort of ear protection do you wear during the race?

Pedrosa: It's molded. It's my size. Custom made.

Nick: When you're going at maximum speed, it is loud?

Pedrosa: No, actually it is less loud at max speed because you leave the sound behind. So, it is much more loud when you are in the corner than when you are in a straight line.

Nick: Does it feel fast every time you get on the bike, or do you get used to it?

Pedrosa: Not every time, but with these bikes, most of the time.

Nick: Do you ride motorcycles on the street?

Pedrosa: Sure. But scooters, to avoid traffic. And motocross.