Ask An Expert: Why Do Electric Motorcycles Weigh So Much? 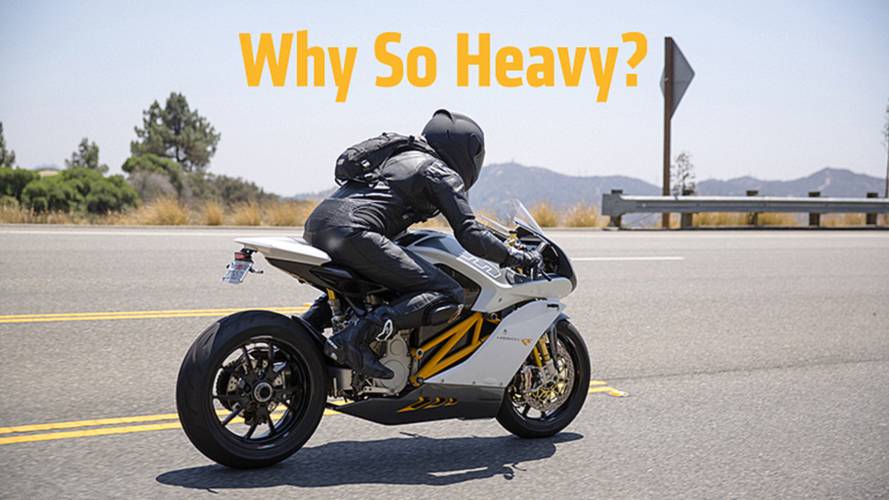 An electric motorcycle designer explains the answer to this question: Why Do Electric Motorcycles Weigh So Much?

Electric motorcycles like the Mission RS are now achieving performance parity with their Internal Combustion Engine counterparts in every metric but one: weight. Wes asked Derek Dorresteyn, Chief Technology Officer at San Francisco start-up BRD Motorcycles: Why do electric motorcycles weigh so much? — Ed.

Electric motorcycles are heavy first, because they choose applications with high energy demands and, second, due to batteries with low energy density.

Electric motorcycles (EVs) are being built now that deliver on power, weight and range, but not every type of motorcycle or use is appropriate for electric drive. To understand the weight differences between the EV and the gas bike, let’s start by breaking it down to basic systems: chassis, drivetrain and fuel/energy source.

Gas or electric, a motorcycle chassis for a given application has the same structural and ergonomic requirements and should weigh the same. Electric drive (motor, controller and gear reduction) has a massive power density (kW/kg) advantage over ICE drive (motor, transmission, air/fuel intake, exhaust), not to mention superior power delivery and throttle response. Not surprisingly, that leaves most of the difference to the extra mass of the EV’s battery pack.

Today’s best battery tech (lithium chemistries) stores significantly less energy (power x time) per unit mass (kWh/kg) than gasoline. So, while EVs get more power out of less weight, they get less energy (i.e. range) out of more weight. How that balances out depends on the vehicle you’re trying to build. But, the general rule is that electrics are going to excel when the energy demands are relatively low and be heavier when the energy demands are high.

The energy needs depend on the use and rider expectations of a given category. A scooter rider and a touring rider expect different things from their equipment; one is light, used at lower speeds over relatively short distances (low energy), the other is large and built for driving long distances at high speeds (high energy).

An example of a good fit being met now by an EV is the comparison of a Zero S or Brammo Empulse to a Honda CB500F. The EVs have similar power (~50 hp), weight (~225 kg) and ranges (~160 km) that falls within the expected use of many CB500F riders (commuting, light sport riding). Matching consumer expectations becomes more difficult in an EV for the liter class sportbike rider. They aspire to 300 km days, with a lot of that spent at extra-legal speeds. This takes a lot of energy; somewhere in the neighborhood of 20-25 kWh given average sportbike aerodynamics.

Even with the superior energy density of gasoline, this usually means a midday fill up. Despite the huge mass advantage an electric motor has, there is no way with current battery technology to fit that much battery on a sportbike within the typical wet weight ranges (~210 kg) of the ICE sportbikes. Electric sportbike manufacturers then have to balance the compromise of range vs. weight.

Electrics benefit from a large reduction in gyroscopic forces coupled with smooth power delivery, so these bikes can “feel” lighter than equivalent ICE bikes, with their large rotating crankshafts. The examples in the market and on the track (Energica Ego, Mission RS, Lightning Superbike and Brammo Empulse RR) seem to all be converging around 275 kg as that balance point.

So, you could say the short answer as to why electrics weigh so much is, “liter class sportbikes.”

The choice to build an EV for a market with difficult-to-meet range expectations is the reason some EVs are heavier. For the EV motorcycle designer, it boils down to identifying the right factors to balance (mass, power, range and cost) to deliver a product that meets consumer needs. EVs are finding their niches in these places consumer needs can be met now with good choices and technology.

The second part of the answer can be found in the different choices companies make around battery technology. This will take another article to really dive into, but not all EV battery strategies are the same. For example, the A123 battery cells (121Wh/kg) like those used in the Fisker Karma have far less energy than the Panasonic cells like those used in the Tesla Model S (240Wh/kg). For a given range, the Tesla batter is going to weigh 40 percent less. On a 15kWh motorcycle, this would be a 150 kg difference.

My company, BRD Motorcycles, has made a similar choice to Tesla, developing a proprietary, high-energy battery platform to keep weight low and deliver the range customers demand while also providing a great power-to-weight ratio.

In the coming years, EVs will see ranges increase, mostly driven by improved batteries, helping the market for EVs to expand into more segments. That said, don’t plan on replacing your Gold Wing with an EV just yet.

Why Range Is An Issue: A Shocking Truth