Riding the BRD RedShift SM on The Snake

“So much power it’ll wheelie off the throttle at any speed.” If you’re anything like me, you’re a bit sick of the hyperbole that makers of electric motorcycles have been slinging for the last few years. There’s talk of instantaneous torque, practical ranges and performance on par with (small) ICE bikes, but the reality has only been overpriced products that are slow, massively overstat...

“So much power it’ll wheelie off the throttle at any speed.” If you’re anything like me, you’re a bit sick of the hyperbole that makers of electric motorcycles have been slinging for the last few years. There’s talk of instantaneous torque, practical ranges and performance on par with (small) ICE bikes, but the reality has only been overpriced products that are slow, massively overstate their real world ranges and are, well, just plain crappy. So when Marc, BRD’s CEO, started slinging adjectives at this supermoto prototype prior to Sean and I riding it in Malibu, I was pretty skeptical. The thing is, he was absolutely right. The BRD RedShift SM is absolutely terrifying, in all the right ways.

We’ve reviewed the RedShift before, when Sean flew up to Infineon to ride it late last year. The idea with it was to create performance parity with a 250cc ICE equivalent, just with lower running costs. Weighing 250lbs and making 40bhp, it’s absolutely on-par with bikes like a KTM 250 XC-F. The problem is, that bike retails for $7,699 and the BRD should cost $15,499 when it goes on sale later this year. Wait, I said lower costs, right? It’ll achieve that in exponentially lower running costs. That KTM will need an oil change every five hours, valves need adjusting at 20 and a new piston somewhere around 40 hours. The BRD? You need to top up the transmission oil once every 200 hours. Average that out over a couple years and a bunch of hard riding and the BRD will absolutely work out cheaper. But will it work out faster? Well, last year, Sean was a second a lap faster around Infineon’s kart track on the electric than he was on that KTM.

Check out this picture Ashlee shot of me on the BRD, then this shot of Marc, taken by Paul at Rock Store Photos. When I say “terrifying” it’s not hyperbole. This is not a bullshit bike with bullshit components. It’s not a commuter dressed up as a supermoto. And it wasn’t built to save the environment. Instead, the RedShift is the product of a group of supermoto and motocross racers who realized that, using electric power, they could build a superior motorcycle.

The first terrifying thing about the SM wasn’t the power or the handling, but instead the throttle programming. Prepping the bike for our morning run, the BRD guys had accidentally reversed it to a year-old map. That resulted in a delay between any input and action from the motor. Not a big deal when getting on the power — it just came a second later — but rolling off for corners, the surprisingly strong engine braking would kick in a second too late, a second after I’d already gotten on the incredibly strong front brake.

Engine braking on an electric motorcycle? BRD’s not the first to do this. Like other electrics, it’s achieved through regenerative braking, where the motor applies resistance to the rear wheel. Also like other electrics, most notably the Mission R race bike, BRD doesn’t do this to increase range, but instead to deliver a more ICE-like feel to the rider. That Zero DS I lived with a month or two back did the same thing, just to a much lesser, barely noticeable, degree. On the BRD, rolling off the throttle feels like rolling off a big v-twin. It’s all you need to regulate your speed on tight road like this section of Mulholland Highway.

The problem was, that lag in throttle programming combined with the next terrifying thing about the RedShift — its brakes. That Brembo Monobloc front caliper is more commonly found hauling 400lbs superbikes down from 180mph speeds reliably and consistently on race tracks. So bolt one to the front of a 250lbs supermoto and it shouldn’t come as a surprise how sharp and powerful it is.

Know how on most bikes, it takes a little bit of a squeeze before braking power really kicks in? Not with these top-shelf Brembos. A huge amount of power kicks in the second you brush that lever. Good for people needing and expecting that, bad for people riding an unfamiliar bike for the first time. Combine that kind of braking with the throttle lag and corner entry went like this: see corner, decide on appropriate speed, roll off throttle, begin braking, engine braking kicks in, realize you’ve shed way to much speed, let go of brakes, front end rebounds as engine braking continues, swear a couple times, pick up the throttle, wait a second as engine braking continues, get jerked backwards as power kicks in, continue...

All that wouldn’t be a huge problem if the RedShift was a typical, 400lbs-ish performance bike with safe, friendly suspension geometry. But it’s not. It’s a proper competition supermoto that’s light, short and sharp. That exaggerates every input; a little throttle will pull a wheelie, a little brake will pull a stoppie. So, a little something unexpected is enough to cause major problems. 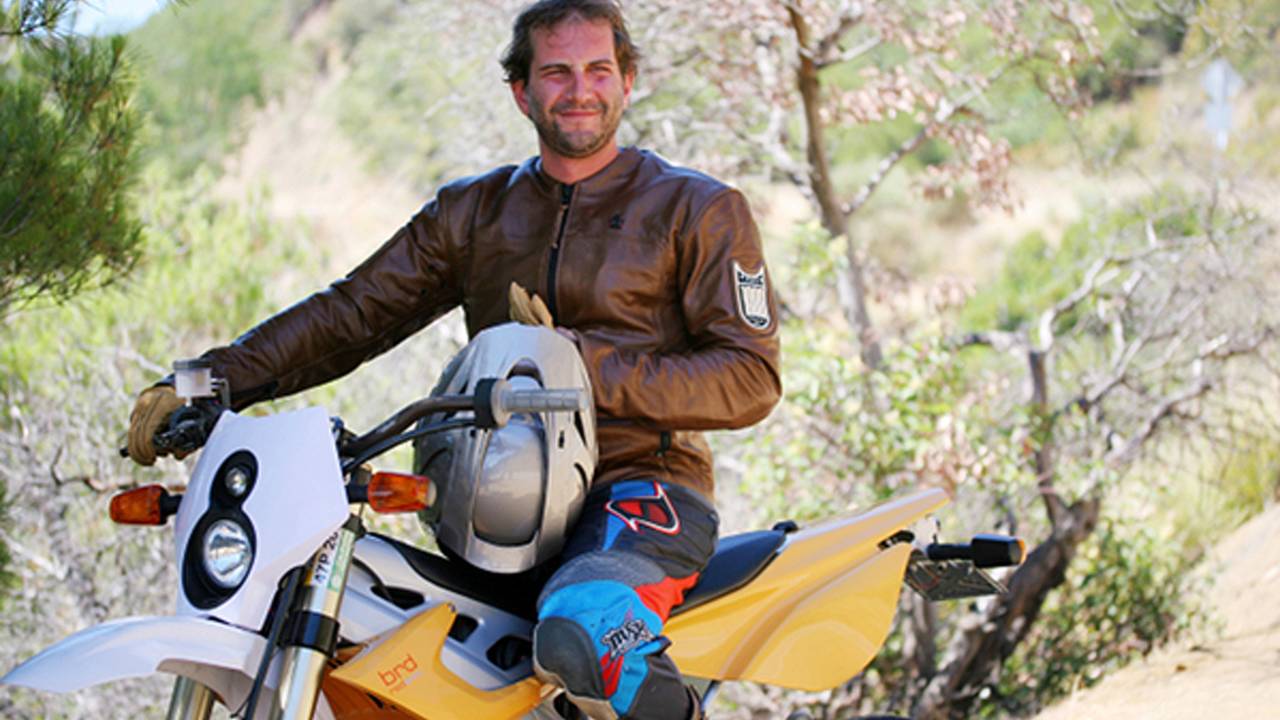 Should you take these remarks as criticism? I mean them as exactly the opposite. BRD could have dumbed down the bike to make it friendly. They could have relaxed the geometry, fitted a less-powerful caliper and made the same mistake that literally every other maker of electric bikes has made — tamed the power delivery in the name of safety. But they didn’t. They just made the bike as awesome and as fast as they could.

And I do mean fast. 40bhp might not sound like a lot, but with the RedShift, BRD has achieved something no other motorcycle has done, they’ve realized the full potential of electric motivation. Twist the grip on an ICE bike and you’re regulating the volume of gases entering the combustion chamber. Depending on where you are in the rev range, that varies the amount of power the engine produces, which is then varied depending on which gear you’re in. Twist the grip on the BRD and you’re directly and proportionately influencing the amount of power reaching the rear tire. 50 percent throttle is always, consistently 50 percent of power. It doesn’t matter how fast you’re going, max throttle equals max power. Don’t overthink it, it’s that simple, but this BRD is the first electric bike I’ve ever ridden ever to actually pull it off. How neat is that?

And that’s what I think the real story with the RedShift is —it’s the first production-destined motorcycle to ever realize the full potential of electric motivation and, in doing so, demonstrate a clear superiority to its ICE predecessors.

That direct correlation between the throttle and power isn’t just some nerdy math, it has real world, real rider benefits to things like feel (which is amazing on the BRD from every component), but also to performance. Sean’s laptimes on the BRD were quicker than the KTM because he wasn’t cutting power every time he had to shift. He didn’t have to chase power in each gear, the amount of power he wanted was always there, no matter what. As you’re riding the RedShift, you’re not thinking about that though, you’re expending all your focus on all the other stuff involved with riding a motorcycle — monitoring grip, correcting slides, nailing corners, planning the next and you’re able to do all that more proficiently because trying to keep an engine on the boil is no longer on that list.

Add to that the ability for customers to create custom maps for their own bikes, dialing in factors like engine braking, throttle response and even outright power to suit their individual needs, wants and riding styles and the potential for this thing just starts to seem amazing. At least that’s what Sean was thinking after this, his second ride...

Sean's Second Ride on the BRD

Last time I rode BRD's test mule, it was at Infenion Raceway's kart track. Traffic, a general unfamiliarity with SuMo body position and electronics gremlins halted a full evaluation, but I did learn a few things: The chassis is razor sharp, easily better than anything from Japan and the power is there, even if it kept cutting out that day. This time we're on the snake, a road I know well and the motor controller is behaving. Well, mostly. Marc and I are both noticing a slight latency in the throttle (everything you do happens a few mili-seconds later), but it's just that, slight. And yet, even with that latency it feels like a scalpel. In contrast, the Aprilia is a brute. When I got on the Touno after the shoot, it felt like a tank. I had to use two fingers and squeeze to make the brakes work. I had to slip the clutch and make sure I was in the right gear. The front end felt numb.

Since breaking a bunch of bones in January, Ashlee and I have become a bit jaded with life in LA. Yes, the camping and mountain roads are amazing, and so is the legal fun, vegan indian food, and perfect weather. But if you want to experience true freedom, get outside LA county. If you're us, you go to Deer Island Oregon.

40 miles NW of Portland and there's no cell reception, no paved roads, no cops... It's the kind of place where I can go mountain biking in the clouds right out the front door. There are other people living on our gravel road, but they just want to keep to themselves and clean their guns.

My mountain bike has two problems: First, hills can be a real pain when you're recovering from knee surgery and second, sliding the rear with a brake is no substitute for actually exploring the limits of traction with a dirtbike. 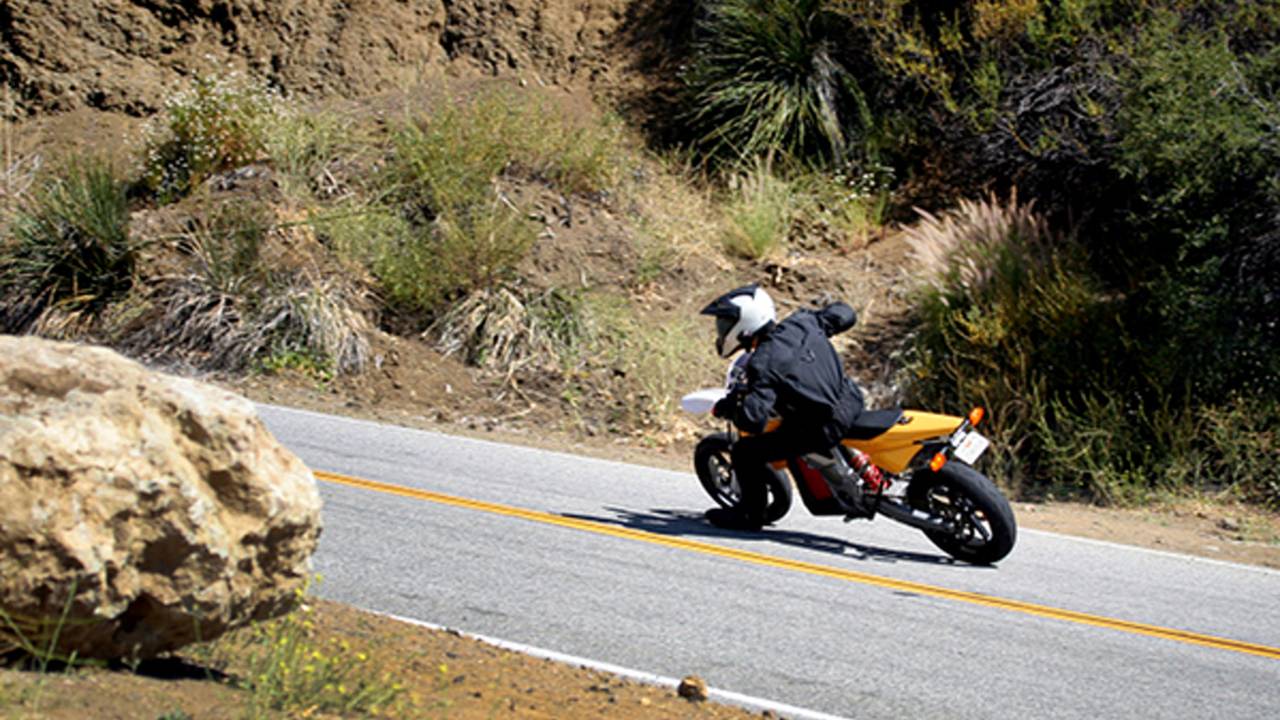 An XR500 is the practical fix, but the pie-in-the-sky is a BRD Redshift. Sitting in the passenger seat of the Volvo, I imagine what would it be like to blast down those gravel roads sideways with nothing but the sound of straight cut gears and Skrillex coming over the bluetooth. To confidently ride chained off roads with NO TRESPASSING signs, knowing that there's no sound to give me away. To jump logs and climb muddy hills, eventually popping through the clouds and into the sunlight. To do it all without spending a penny on gas. The BRD is that dream come true. Well, at $15k it could. — Sean Smith