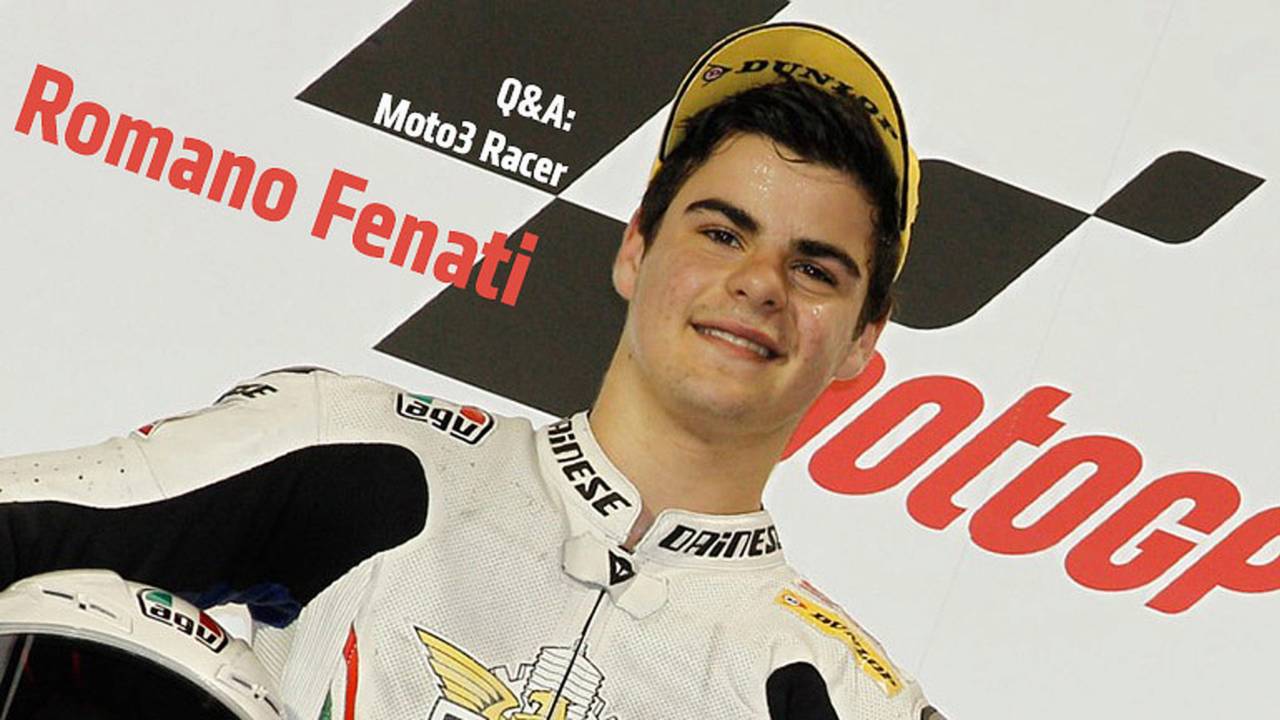 Hand-picked by none other than Valentino Rossi as a rising talent, Romano Fenati is taking the Moto3 class by storm. Racing first for FTR Honda this season he is joining Rossi’s Sky VR46 team. But, what makes him tick?

I can’t really explain how I decide to become a fan of an athlete. It’s a peculiar mix of glory, triumph, humor and style. Growing up the younger sister of a baseball-obsessed brother, I fell for Carlton Fisk. Why? He was handsome, a catcher — the drummers of baseball — his name was fun to say and he wore face paint.

Romano Fenati doesn’t paint his face. In fact, he doesn’t even have graphics on his helmet. That was one of the first things about the young Italian. His plain white AGV helmet sticks out in a sea of custom-painted helmets. Clean and purposeful, it’s total Dave Aldana-style punk rock.

But, it wasn’t just his helmet that caught my attention during his first season, it was impossible to ignore Fenati’s riding. Doing the Moto3 slip stream ballet, Fenati finished second in his first race and first in his second. He went on to have a solid rookie season, finishing sixth in the Championship. His tenacious persistence and patient, polite method of passing made him a showstopper. His second season, last year, was less fruitful though. Riding a slower Honda, he often trailed the faster KTMs. But, if you looked a little closer, you’d have seen him fighting tooth-and-nail in the middle of the pack on an inferior bike.

Valentino Rossi saw his potential too, snapping him up for the new Sky VR46 Moto3 team. Now, Fenati will be riding a KTM alongside former teammate Francesco Bagnaia and managed by former Ducati team boss Vittoriano Guareschi.

Romano Fenati with Rossi and the rest of the VR46 team.

Since I’ve given myself the title of Fenati’s Number One American Fan, I’m proud to introduce him to RideApart.

RideApart: Who are your heroes in racing?

Romano Fenati: My hero is obviously Valentino Rossi. He has inspired all young riders in my opinion. His is the best rider in the world and it’s an honor for me to have the awesome opportunity to ride for the new team.

RA: Do you ride on the street?

RF: Yes, I ride a bike when I’m at home. Generally, it’s a Derbi 50cc scooter, which is perfect for moving around the city.

RA: How do you train?

RF: I train daily with my personal trainer Guido. He helps me to keep fit with special body exercises for racing and then, often, I train on bikes at Valentino’s Motor Ranch.

Romano Fenati (second from left) alongside Rossi at the Motor Ranch

RA: How has your success impacted your daily life?

RF: It was an authentic boom! I had never done interviews, photo shoots or signed autographs until then. Those were such good sensations. Anyway, where I live (Ascoli Piceno), it’s a small city and we know each other, so it’s normal life there.

RF: In 2013, I did my best with the team. Honda supported us, but KTM did a really good job and it was too difficult to fill the gap. I’m looking forward to the new season, I hope to show my potential on the new bike. I would like to show my family and friends who support me what I’m capable of.

RA: What do you think of The States?

RF: I really love it here. I’m always excited to visit the U.S. races, but I haven’t yet had time to really see the country.