Feeling his age, Tod tries to pare down his bike collection and buy something more sensible and age-appropriate. It doesn't go as planned.

It was time for a change, and not a small one. The elements had recently conspired to reconfigure my motorcycling profile. Said elements being age, money, and garage space; too much of the first and too little of the last two.

Emotionally I’m still a sportbike rider, but physically I’m a geezer. This acknowledgement was overdue, but I had to admit that it had finally arrived – The Year of Getting Old. The Aprilia Tuono 1000R and Suzuki DR 650 would simply have to go. The Honda NX 250 and BSA B50 would stay around, but that miniscule node of practicality in my cerebrum would prevail. Time for a cruiser. 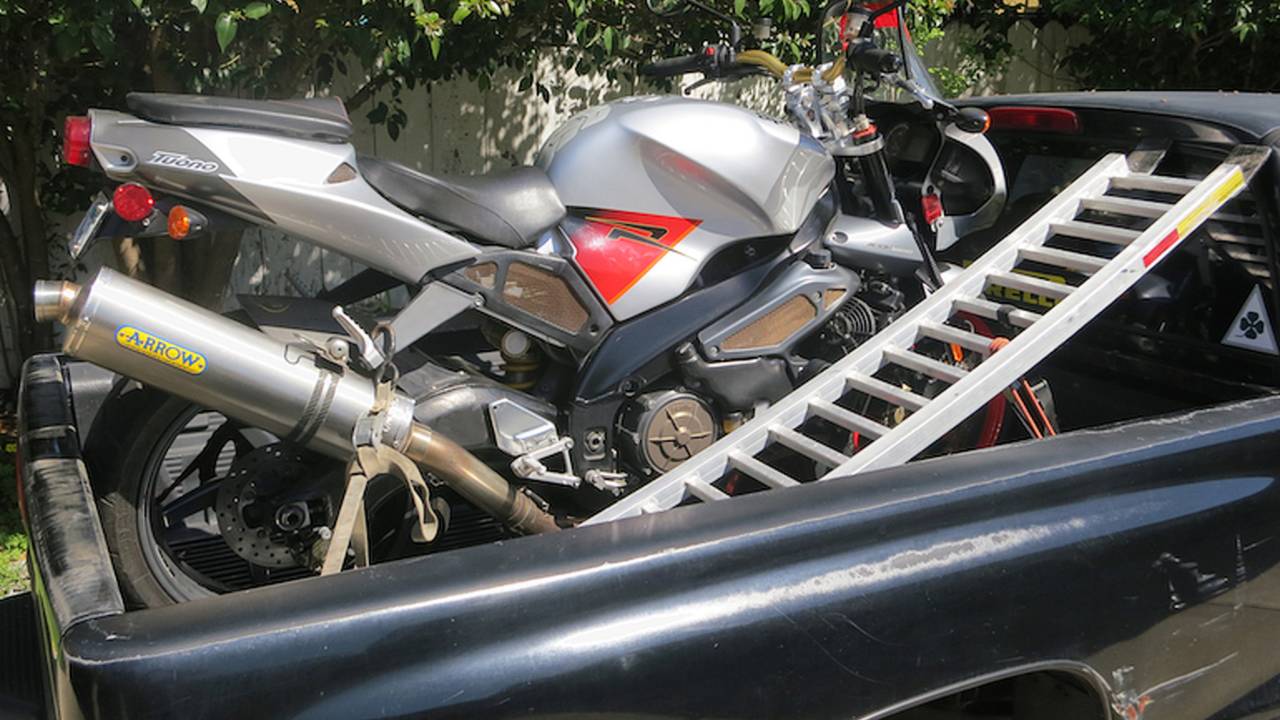 My wife found me here, long after the truck had gone, sobbing in the driveway, and brought me a beer.

By my definition, that’s something in the realm of a Harley Sportster, Moto Guzzi, Triumph twin, or older 900 triple. But I’m done with chain drive road bikes, so I was thinking maybe a Suzuki VX 800, Honda Shadow, or Kawasaki Vulcan. I was leaning toward the Suzuki since it had the cleanest design and the lowest lard-removal factor.

Then, just by chance at the local Burgers ’n Bikes Nite, I espied Dave Walsworth’s 1980 Suzuki GS1000L bobber and was smitten. The notion of an inline four hadn’t even occurred to me, but I was charmed. Shaft drive, low seat, headlight fairing, bobbed fenders, spaghetti-header Vance and Hines exhaust system; a lean and mean cruise machine in yellow and green. And only 37 years old (Hell, that's practically brand new! -Ed.). 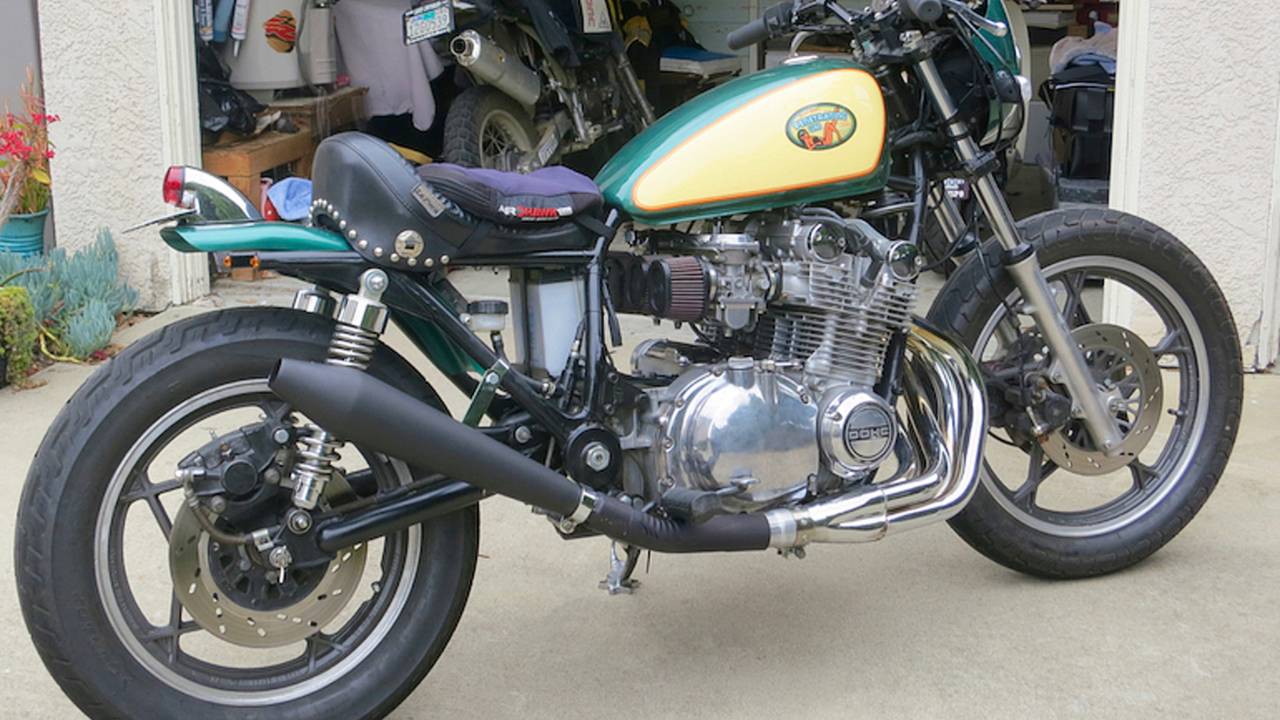 Dave left before I could talk to him, but a few days later I was talking to his neighbor Larry “Dogman” Kahn who, it turns out, had donated the Triumph flyscreen for the Suzuki's build. During the conversation, it came up that the GS might be on the market, or, as the Brits say, “That bike may be for sale.” A call to Dave proved that a true fact, so I bought it – a ready-made cruiser with some honkin’ power. 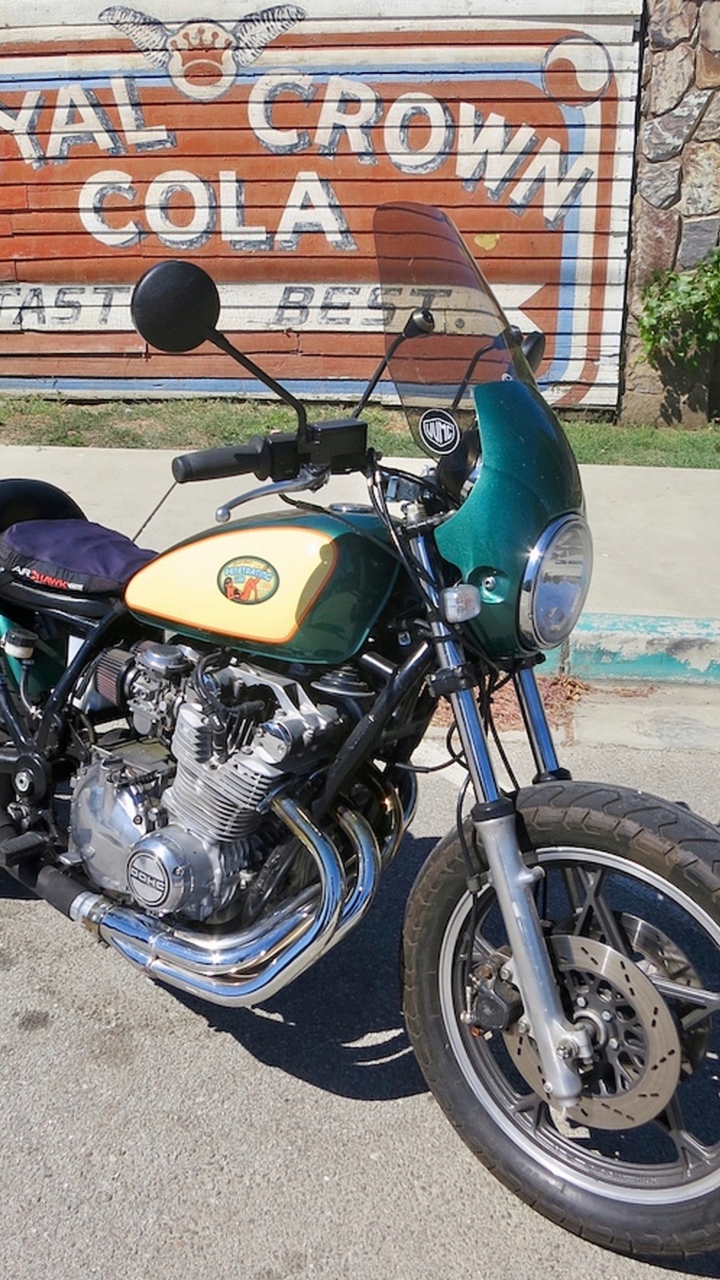 Dave Walsworth, to my good fortune, is a craftsman and fair-minded human with little interest in the profit motive. A retired firefighter, he spends his time finding and refurbishing orphaned motorcycles and cars, and eliminating their unnecessary pieces. His regular ride is a 2007 BMW R1200GS, and a few years ago he built a K1200RS, the Warthog, to run at Bonneville in the Run-What-You-Brung class where it ran 161mph. His current project for the salt is a Kawasaki Ninja 250 with a sidecar. 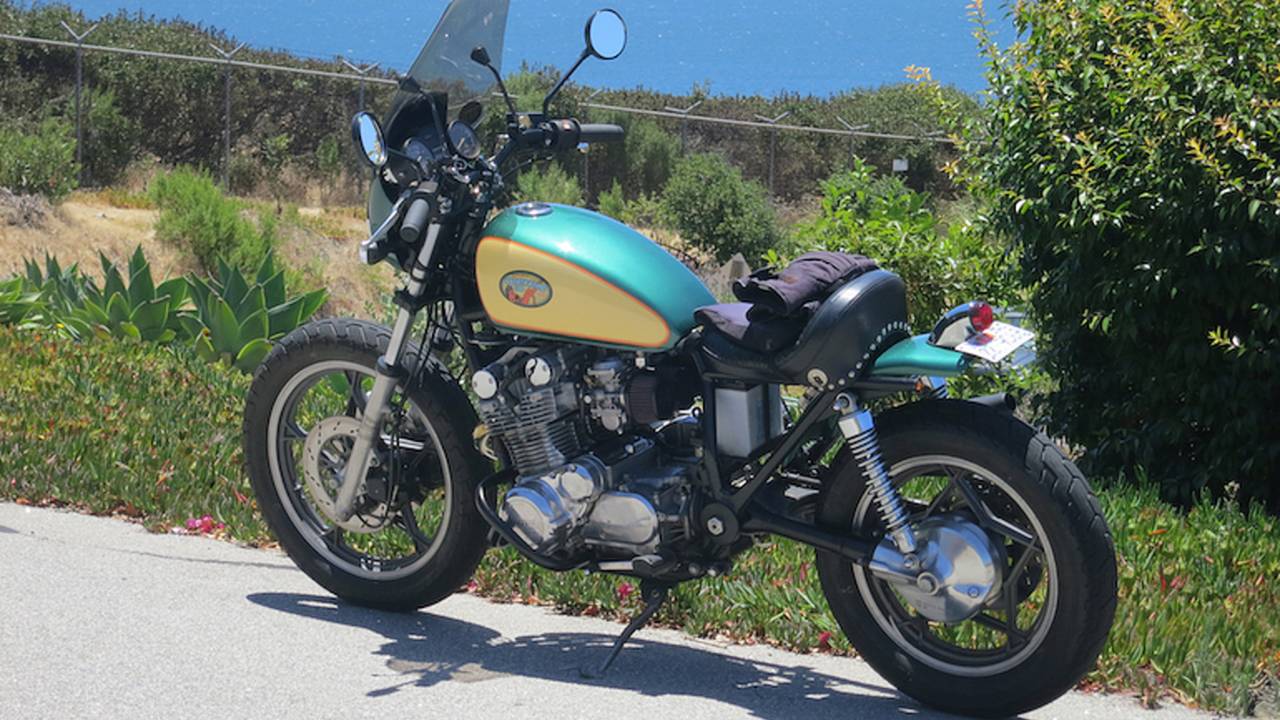 The salvaged GS that gave its life for this bobber build had few miles on it, but an early crash and long period in storage had rendered it needy: warped head, holed ignition cover, trashed bearings in the steering head and wheels, bent fork tubes, junk shocks, etc. By the time Dave was done, the frame had been cleaned of numerous tabs, machine welds cleaned up, bit of brazing here and there, passenger pegs and mounts lopped off, new battery box and electrics plate fabricated, and carbs rebuilt. The taillight on the widened rear fender is from Dime City Cycles, and the turn signals in the subframe tubes are trucker’s marker lights, which he chose because they fit. The yellow paint was left over from his quite trick ’71 Mercury Cougar convertible, and the fictional Devil Girl’s Penetrating Lube sticker added the final bit of whimsy. 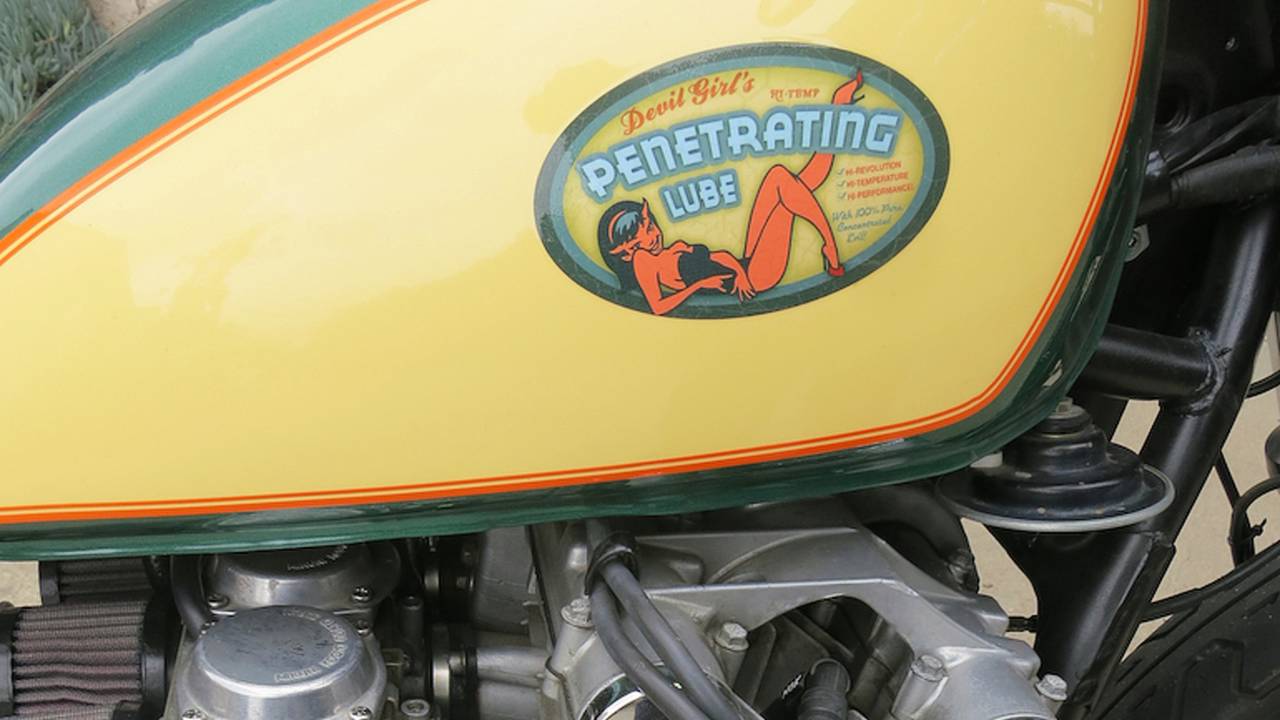 Once I got it home, just a few mods were in order to make it mine. The 12-inch Fox Harley Dyna shocks were too short, and had the rear end was too hunkered down. A pair of 13.25” Triumph T100 units brought the ride height back up and added a bit of ground clearance. Likewise, the LaPera Harley saddle made the butt/footpeg/handlebar ergos a tad too crumpled for my dimensions. This was easily rectified by an Airhawk seat cushion and a pair of Rox vibe-damping risers that lifted the bars a half-inch and back two. The handlebar-mount windshield fit nicely behind the headlight fairing, making the sit-up riding position tolerable on the highway.

The long Vance and Hines muffler sounded swell, but was too prominent visually and stuck out too far. It yielded to an upswept Emgo reverse-cone megaphone, marginally louder but much more tidy. Short shifting is still required within the confines of civilization, but the Suzuki is geared so low, and the carbs so well dialed, that it’s in top gear at the end of the driveway. And I have a short driveway.

Be not misled, though, this is no Sunday parade cruiser. This bad bob likely weighs maybe 80 pounds less than a stock GS1000, has rheostatic throttle response from 3,000 rpm up, and at 5500 the engine really starts to get your attention. The sudden entry to warp speed caught some owners unaware back in the day, but these engines were the kings of thrust for drag racers and acceleration junkies worldwide. The surprise is that this one will putter around in top gear, turning 3500 rpm at 50 mph, with nary a hiccup. 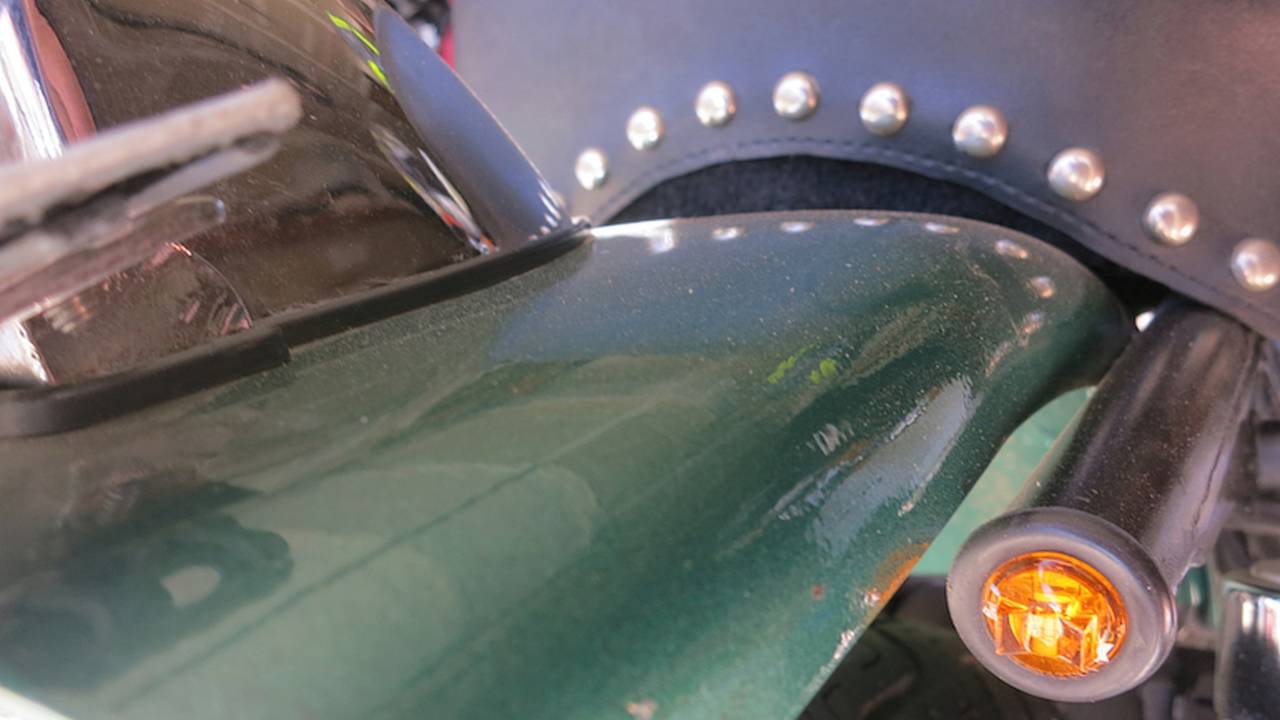 With the recent attention given to older motorcycles as fashion items, newly minted bobbers and trackers have appeared in various forms. But it’s nothing new - the first factory cafe racer, the 1915 Cyclone 7R-15, came well before the description. “Alley racers” and “cutdowns” have been part of the sport for a century, and honoring the old styles with new technology gets marked down as a Good Thing. Assuming they go, turn, and stop properly.