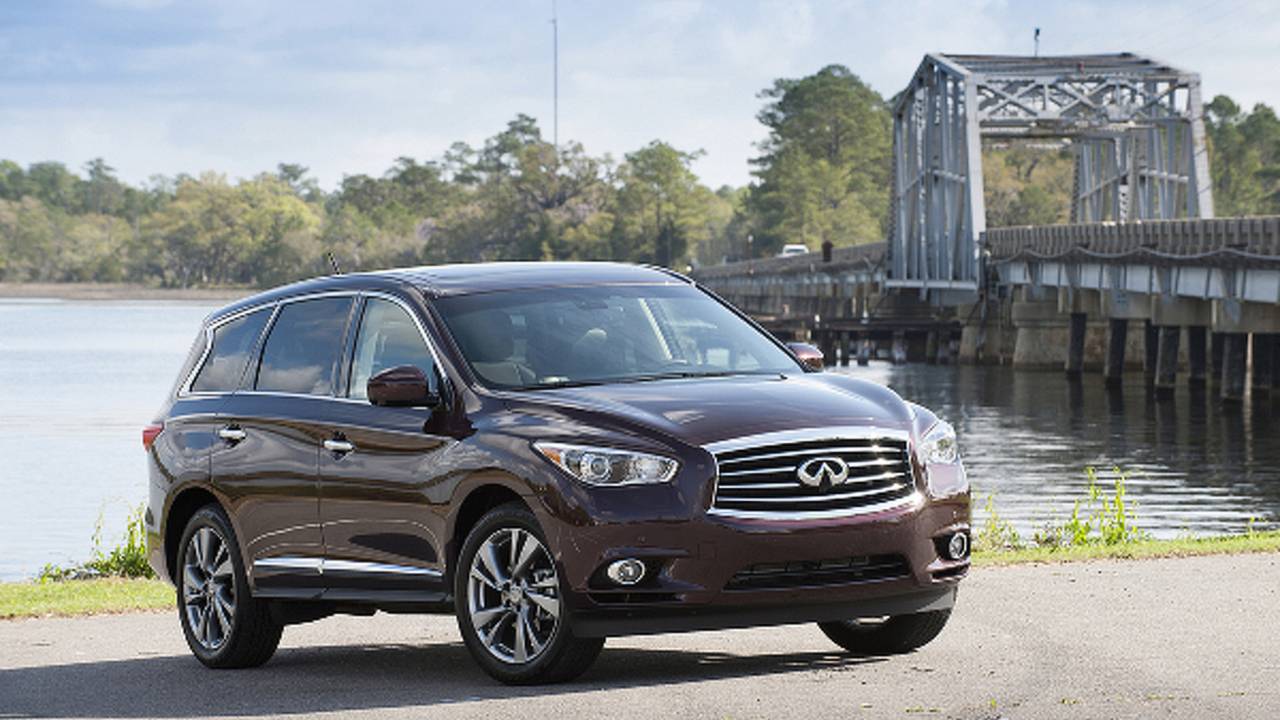 For 2013, Infiniti introduced the 2013 Infiniti JX35 as their all-new luxury crossover. It's a seven-seat crossover that excels in safety, roominess, performance and technological features. The JX has class leading overall passenger volume and rear cargo volume. It has Infiniti Connection - an internet assistance service and it has the world's first Backup Collision Intervention system. Other safety technologies include Around View Monitor, Lane Departure Warning and Land Departure Prevention. Infiniti's Goal with the JX35 is create and introduce a new style of luxury crossovers that are "grown up vehicles without being old."

The 2013 Infiniti JX35 is the new standard for luxury crossovers - it seats 7 passengers, is full of safety technology, has a good engine and decent fuel economy. The safety technology on the JX is some of the best in the business and is the first vehicle with Backup Collision Intervention, a system that warns the driver of incoming vehicles through visual, audio and physical warnings. The engine is more than efficient than the outgoing mill with 265 horsepower and 248 foot pounds of torque and still has a decent fuel economy with 18 city, 23 highway and a combined of 20 mpg. Not bad for such a large vehicle.

We don’t love the CVT. The JX should, for the money, come with standard all wheel drive. We’d like a larger engine option, as this is a big, big SUV. We wish they’d finally update the navigation system. Also, it’s expensive when kitted out with options.

Lots of cargo space in the Infiniti JX35.

With a tow capacity of 3500 pounds, you'll definitely be able to tow a trailer with several motorcycles or even a compact car. With15.8 cubic feet of cargo space with the third row up with that you'll be able to carry your groceries, but not much after that. The second and third row seats also fold down adding enough space to carry whatever you please with a reduction in passengers and cargo space goes up exponentially. This is a large SUV so have at with hauling, tow a small boat or a few bikes and you’re good to go.

We liked the JX even though we kept wishing for a little more power. In front-wheel drive guise, the JX is fine for around town, but hit any inclement weather and you’d be wishing for all-wheel drive. The JX drives from what you’d expect from a luxury SUV, everything works, it’s precise in its handling and the drive is velvety smooth. Will it take you up the Rubicon and kick you back into your seat? Not really. If you want something big and beautiful and are looking for a calming presence to your morning commute, look no further.

The 2013 Infiniti JX35 comes with a 3.5 liter V6 that produces 265 horsepower and 248 foot pounds of torque. The engine has been designed with a variable induction control system to improve the efficiency of the engine at low and middle speed ranges. The JX35 is the first Infiniti to use a continuously variable transmission (CVT) and the transmission has a wide gear ratio and low friction design. The CVT was paired with the JX35 to make shifting between gears transparent and increase the overall handling of the vehicle.

The 2013 Infiniti JX35 has was designed for with both luxury and safety in mind. Amenities include a 7-inch display, a USB for an iPod display and a 15-speaker Bose system. We like the Infiniti Personal Assistant – Infiniti’s version of OnStar – as it allows the driver to get directions, make reservations, find points of interest and other services all at the touch of a button. The safety features on this vehicle are some of the best in the business, all of safety systems work in conjunction with the Advanced Airbag System to provide maximum safety for the vehicle and its passengers.

The interior of the JX35 screams luxury with its acres of leather and oodles of wood and chrome accents. The JX has class leading room for passengers and is can haul whatever you throw at it, what with all the sliding seats. The center console has been centralized for the driver allowing the drive easy access to the vehicles' controls. The JX also features a 7-inch touchscreen that can be controlled with your voice. The aerodynamic shape of the JX35 has gives it an aggressive posture redolent of Infiniti’s smaller and sportier FX line. Spoilers and rear tire deflectors on the body help reduce lift on the vehicle. The JX35 comes standard with xenon highlights and fog lights.

It’s big, it’s comfortable and it’s made for Americans! Infiniti is onto something as the JX is selling like gangbusters. The JX can tow your boat, your friends and your family all is style and safety without being obtrusive. A must shop if you’re in market for a large luxury SUV.