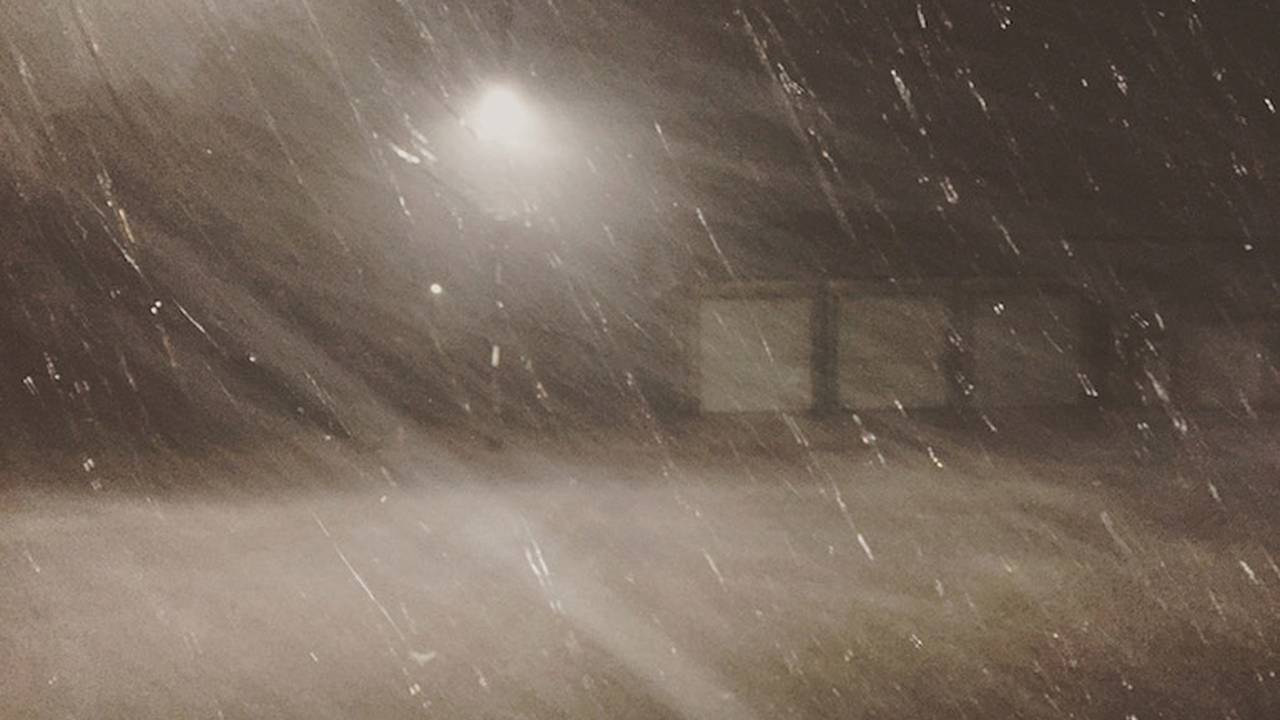 Travel writer and artist Heather L Johnson was in Houston when Hurricane Harvey hit and all hell broke loose.

Just months after returning to Houston, Heather's world is threatened by the costliest storm in US history

DIRECTOR'S NOTE: When Gen. Philip Sheridan first arrived in the Houston area in 1866 he famously quipped: "If I owned Texas and Hell, I would rent Texas and live in Hell."

There are millions of people – myself among them – who would disagree with that assessment. But in August of this year hell came to the city in the form of Hurricane Harvey. To date, more than 70 deaths have been attributed to the storm, and the cost of recovering is estimated at roughly $180 billion. The people of Houston and its surrounding area will be feeling this for the rest of their lives. Among them is RideApart contributor Heather L Johnson, who lives just a few hundred yards from Buffalo Bayou – one of the city's major waterways. Her neighborhood was hit hard by the storm and I have asked her to share her experiences below.

Meanwhile, both of us strongly encourage you to donate to the Hurricane Harvey Relief Fund to help the city we love get back on its feet. – Chris Cope

She was starting to drown. And there was not much I could do about it.

Dirt. Oil sludge. Tire carcasses, abandoned televisions, half-filled trash bags, rats, insects, and god knows what else all swirled around in this lake that was once a street – its surface churning with a spiked ferocity from the water coming out of the sky, pouring on us in sheets that just wouldn’t stop. The half-functioning refrigerator I’d replaced a week earlier was now a floating battering ram, threatening to dent two cars still parked in what was only an hour ago an actual parking lot. My neighbors’ silver Scion popped up from the ground, ass end first, and began to drift away.

I thought I’d parked my motorcycle on high enough ground. I was wrong. From my second-story apartment window I watched the water consume it, piece by piece: rims, axles, then the engine case – oil site glass disappearing under the violent green-brown murk. I could no longer tell the difference between the rain and my own sweat.

Most of us in Houston didn’t believe much would happen. There was tension and excitement among folks at the grocery store, mixed with a relaxed skepticism – the kind that comes from overhyped testimony given by weather guys in ballooning neoprene suits, who exaggerate hurricane water levels for the sake of TV ratings. Harvey had made landfall 190 miles to the southwest, tearing the hell out of several Texas coastal towns with monstrous storm surge and 130+ mph winds. But it was weakening fast, and no one knew where it would go. We all assumed we’d get a lot of rain, given we were on the “dirty” side of the storm. But there was no way in hell anyone could be truly prepared for what was coming.

They had to invent new colors for the radar. New shades of purple, grey, and.. well, black. Harvey’s outer bands began swiping at us; hidden with each were secrets that revealed themselves in the 157-odd tornado warnings issued throughout Harris County during the three days we were under siege.

I bounced back and forth between Facebook and different weather sites, checking in on friends and passing along new warnings as they occurred. A tornado missed a friend’s roof by 100 feet or so; others were touching down in Cypress, a town in the northwest suburbs where I spent my most formative years as a kid. As every new cluster of colors approached, I’d hold my breath. It was getting old, though, so I put on some rain gear and walked over to my neighbors’ joint across the street.

Shane was the only one inside. He stood behind his bar, all decked out – better so than usual – in a bowler hat and suit vest, his ever-lengthening mutton chops adding to the fabulousness.

It’s what I usually order because it’s cheap.

“Nope. Something stronger. Your choice.”

He poured me a shot of locally distilled whiskey that tasted like 12-year-old oak-barrel aged single malt Scotch. It was smooth and delicious and went straight to my head. Which was a good thing. Because when I finished it the sky fell.

Within 10 minutes the street was covered with water. In 20 more, we knew we had to run for it. Shane shut down the power, we grabbed our things, then dove out into the deluge, raindrops reflecting sparks of lightning and collecting in streams already so deep they threatened to flood my knee-high rubber boots.

His family’s home, right next door to mine, was already gone. Water bubbled up through their wooden floorboards, sinking boxes of valuables, music equipment, toys, a brand new mattress ,and just about everything else a family keeps to survive and stay comfortable. Shane’s Buell Blast was inside, too – above ground level, but not situated high enough to avoid submerging its exhaust, spark plug, oil filter, and carburetor.

My place? Up on the second story, with a view of the whole spectacle, 15 feet in the air. The wind wasn’t strong enough to tear into my roof, so everything would stay dry. Shane carried his 10-year-old son up the stairs on his back, dripping wet, depositing him safely onto my couch while he and his wife returned to their watery former home for pets and whatever else they could grab. The TV made it. So did their computer. But not much else.

But my bike.. (For those who’ve read my other stories referencing a Triumph Tiger 800 and a Yamaha XT250, I’m talking about my current one: a super sweet 2016 Suzuki DR650 I picked up upon my return to the United States from Argentina early last year).. was not OK. She was 2.5 feet under and the water was still rising – bloody fast. My motorcycle is my home. I was about to lose it.

DRs are built to cross rivers, yes. But not to sit in filthy, chemical and raw sewage-saturated flood water for hours on end, or to get carried away in it, never to be seen again. What the hell was I going to do?

Shane to the friggin’ rescue. We were going to go for a swim.

The water had become so deep it sank my boots, turning them into paint cans. The stuff was warm and it felt odd to be wearing clothing of any kind. For about a split-second my imagination lingered on what might be lurking in there with us... (Harvey victims had to contend with alligators, poisonous snakes and giant flotillas of fire ants, among other things –CC)  but I had a chance here to save my own damn home. I wasn’t about to compromise that by giving in to any fear.

There was a concrete pad tucked back behind the flooded warehouse that sat above the water completely; but to get to it meant traversing areas between 2 and 3 feet deep, under which lay several inches of grassy mud. There is no way I would have gotten the DR there by myself without dumping her and exposing the engine and exhaust systems to foreign muck. But done by two, the effort became more like a synchronized swimming act. We cleared the various obstacles and got her safe. The relief was palpable. So was the sense of triumph.

Shane and I waded out into the street, 4 feet deep and still rising, to check on the bar that thankfully remained dry. But the taqueria on the corner had taken on enough water to make a swimming pool inside – liquid seeping in through its doors and windows. Fluorescent lights mounted beneath its eaves were still on, giving off an iridescent glow reflected in the water swallowing the intersection – which was now up to my chest.

Slow, sweeping winds pushed the warm rain sideways, blurring my vision and plastering my hair to my face. Half-submerged traffic lights blinked in a consistent rhythm of red, in time with my own heartbeat. A soft, strengthening current tugged at my clothes, a sensation I was familiar with from past dreams of walking through molasses. Part of me wanted to float away in it, along with the dead cars and the bags of trash. It all just felt so goddamned good.

The storm was over. Harvey’s last low-lying bands of weather were moving east, letting in bits of setting sunlight, the first anyone in Houston had seen in four days. A handful of folks crept out into the now-clear street to soak it in. Patches of blue, gold, and pink reflected in gutter puddles, which were all that remained of the flood in my neighborhood, aside from whatever was left stagnating in people’s ruined homes.

The rest of the city was still tied up in knots, its citizens isolated by submerged freeways, without much access to fresh food and water, or to whatever jobs were left. Miraculously, most of us in Houston retained power, and for a disaster of this magnitude, relatively few people lost their lives (most of those killed drowned in their vehicles after getting caught in flooded streets). Other areas of Texas fared worse. Huge numbers of people throughout the southeastern part of the state – including several close friends of mine – lost everything.

My motorcycle was still in its spot, tucked safely away behind the warehouse building my neighbors inhabited before Hurricane Harvey upended their lives. I stared at her nervously, wondering if she would start. Had any water gotten into the engine? The oil site glass revealed nothing – no telltale milky layer sitting atop the oil line. Thankfully her clearance is high, despite having been lowered two inches (a 35-inch stock seat height is tough going for a 5-foot-3 100lbs woman with a 29-inch inseam). So, no water got in through the oil filter chamber.

Still, I knew better than to take wild chances in firing her up. I drained the fluids; no evidence of water there. Fresh oil went in and I cleaned the hell out of the air filter.

I turned the key... and the neutral light glowed green. I pulled in the clutch and hit the ignition button. Nothing. Shit!

Oh. The friggin’ kill switch was on.

With choke pulled out all the way – and the kill switch off – I hit the ignition again and she fired into life.

I started to cry.