A Tiger in Mexico: Balls on Fire

Love for a motorcycle doesn't have to make sense; it just has to be strong.

He looked me up and down, then cast a hard, sidelong gaze at my Tiger 800 as two large guys struggled to haul its steel bulk out of the back of the vegetable truck and onto the receiving platform of one of only two Triumph dealerships in Mexico.

I’d long before learned what this look meant. "What in God’s name is she doing on that thing?" is a simplified translation. A question that typically hung in the air for a while, as the only answer I could ever think of was kind of desperate and silly. 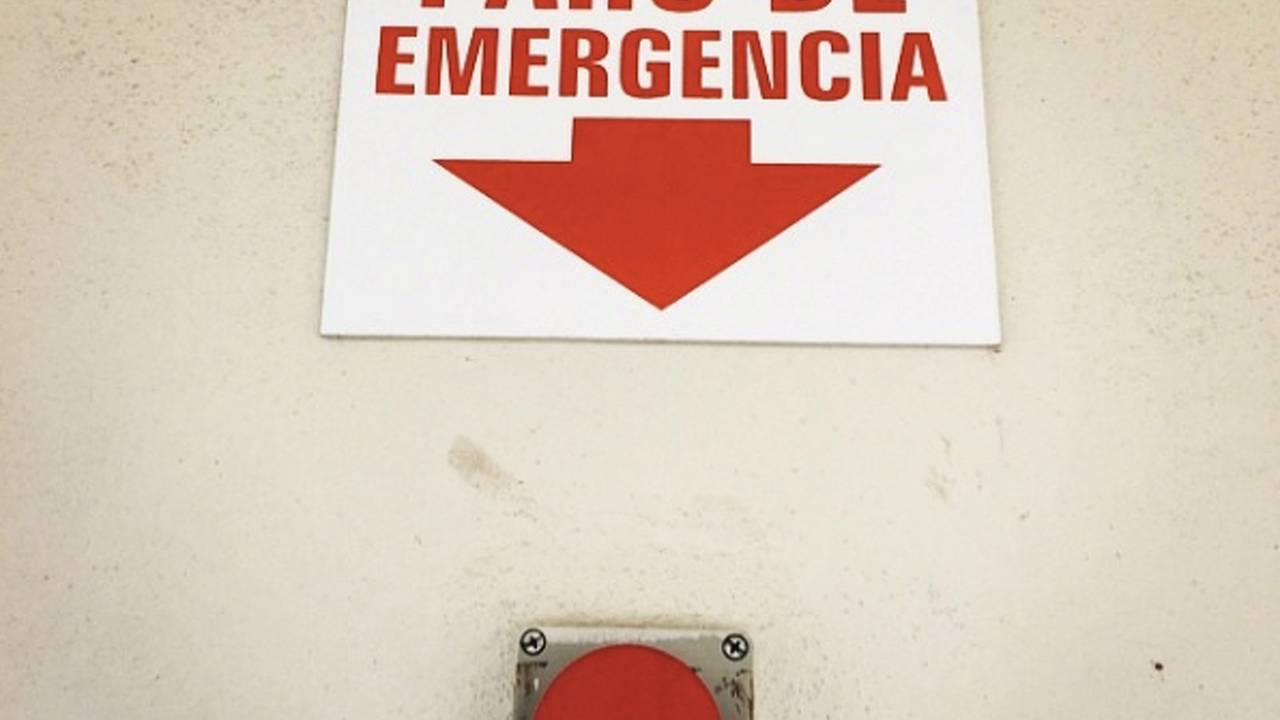 “You’ve got to go with what sets your loins on fire,” a friend once said around the time I bought my first motorcycle.

Never mind what’s practical, or in my case, what fits. If it drives you insane, from the inside out, it doesn’t matter. This is how I ended up with my Tiger (aka “Ripley”, after Sigourney Weaver’s bad-ass-as-all-get-out lead character of the film Alien). Though I could barely tiptoe her, she pirouetted over asphalt weightlessly, and god almighty did she look good, with her naked black matte frame and double headlights like satanic bedroom eyes. If one could fall in love with a collection of bolts, pipes, hoses and wires, I’d accomplished that. 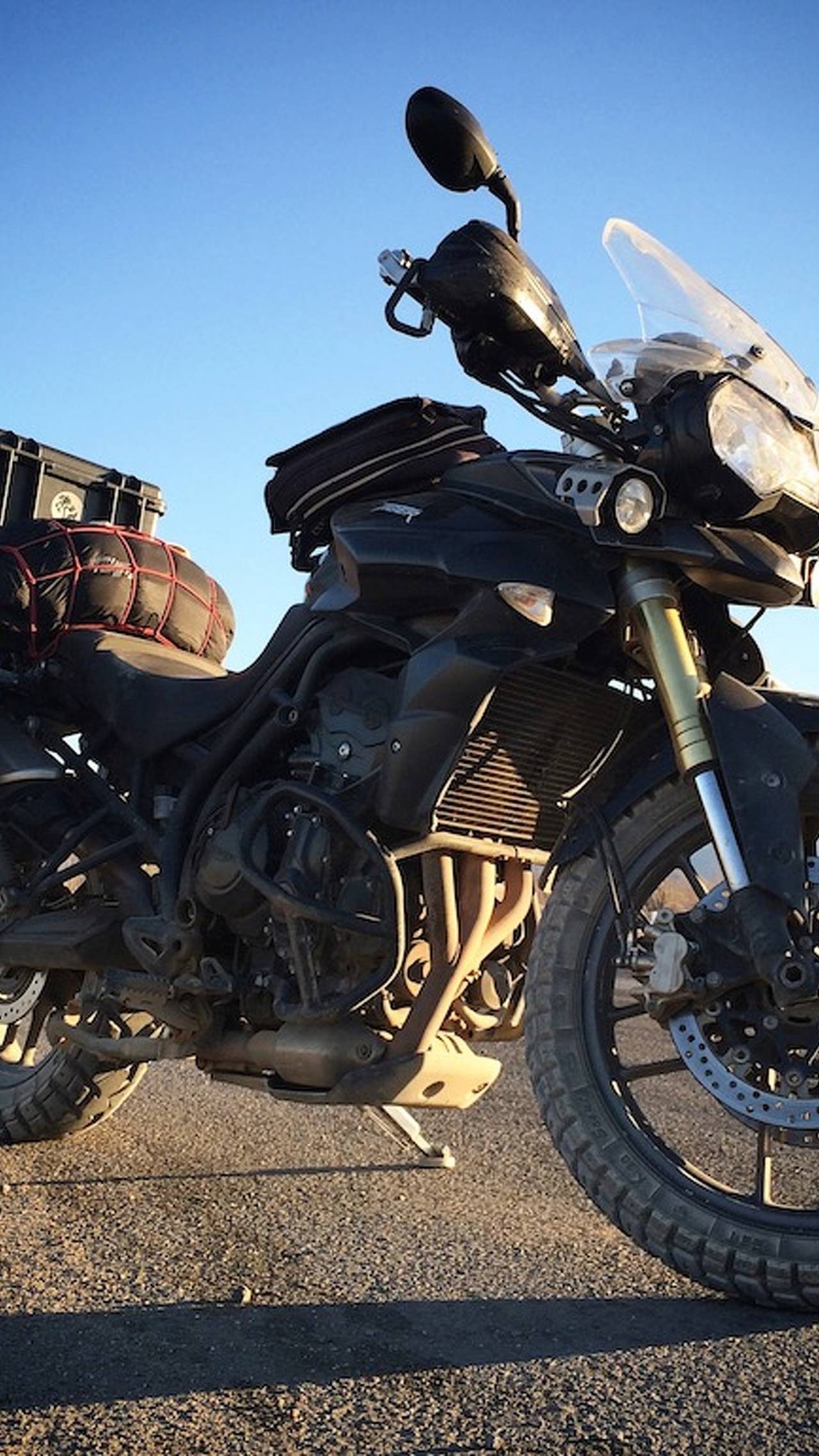 But she had computer parts as well. I’d ridden (and broken) her in territory where computers were few and far between, and I was paying the price.

Forty-eight hours earlier, in the remote Mexican state of Tabasco, I’d sped into a pothole big enough to take out a rear sensor controlling engine functions, which not only disabled the bike, but rendered it unfixable locally. After a 500km (300-mile) overnight truck haul through an especially hairy mountain pass, here I was, staring at my heavy, complicated, beautiful Tiger – soon to be newly repaired with a rewired sensor and freshly downloaded remap, courtesy of the First World and its high (i.e. expensive) technology.

Yeah… Big. Fast. Fierce. With a look that says: “Don’t fuck with me or I’ll run your ass over.” 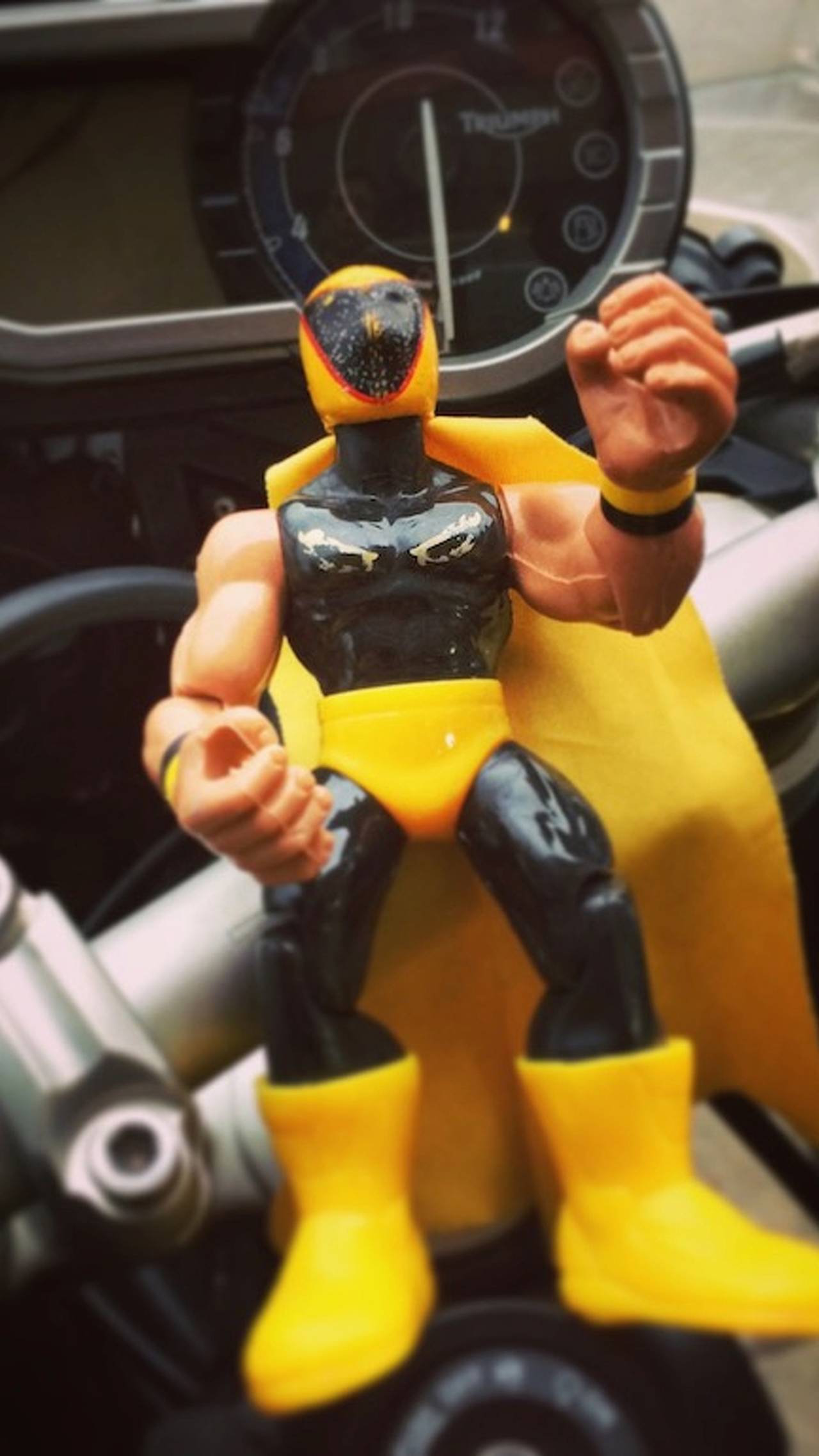 Not unlike the retired racehorse I fell for when I was 13, named “Popeye” for the fact that he was – you guessed it – missing an eye. Back then I used to muck out stables in exchange for free horseback rides, and I’d stare at him longingly, hoping they’d one day let me take him out. They did. I ended up tossed onto the exercise paddock fence like a spoiled kid’s cast-off Raggedy Ann doll, finishing the day in a hospital examination room.

Lesson learned? Hell no. History tends to repeat itself. 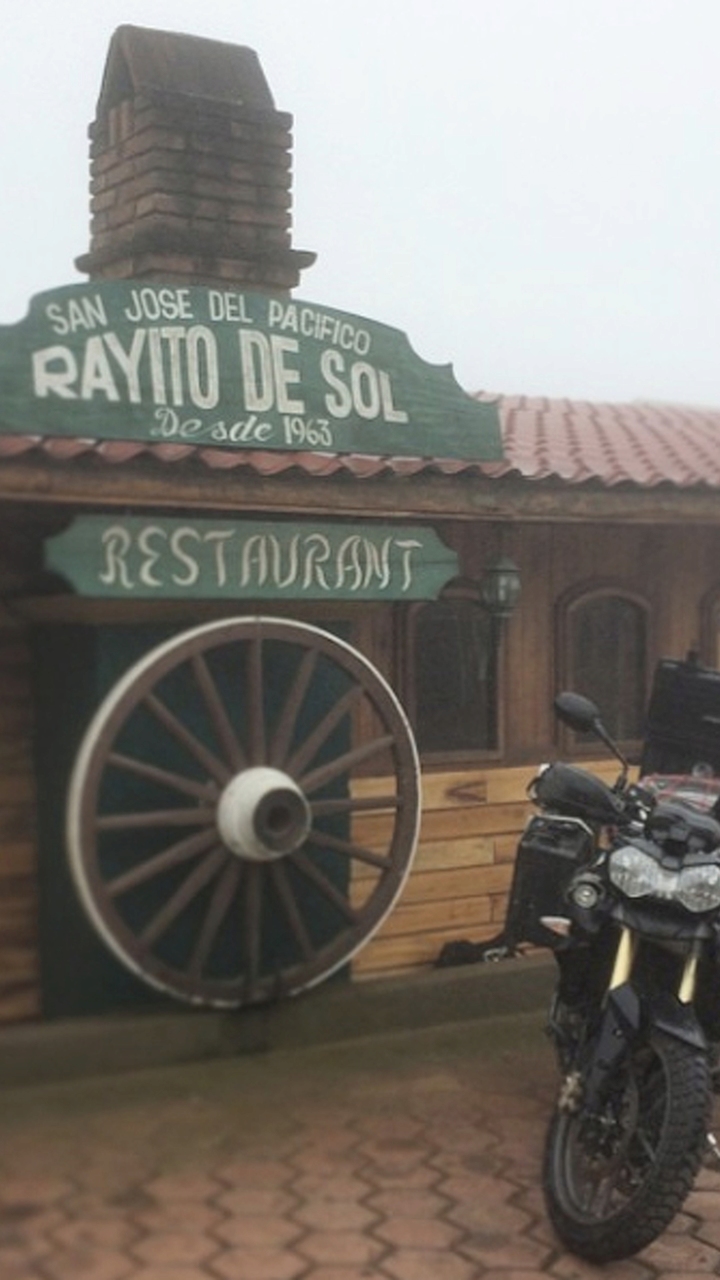 Not too long after we had arrived under cover of darkness Ripley was as good as new. The misadventure in Tabasco had truncated my original plans to ride a loop around Mexico, but I was determined to salvage what I could, rather than returning home. A friend had invited me to stay at his hotel on the coast of Oaxaca, albeit with a warning.

“The road in is challenging,” he said. “But you can do it. You’ve got the right spicy attitude.”

There was a wink in his tone. Three days and four nights in a gorgeous little family-owned resort sounded unbelievably great. I’d rest up and soak in every second of this little tropical paradise, with its private beach, coconut palms, and neon-red crabs that skittered everywhere with their claws up like fists. 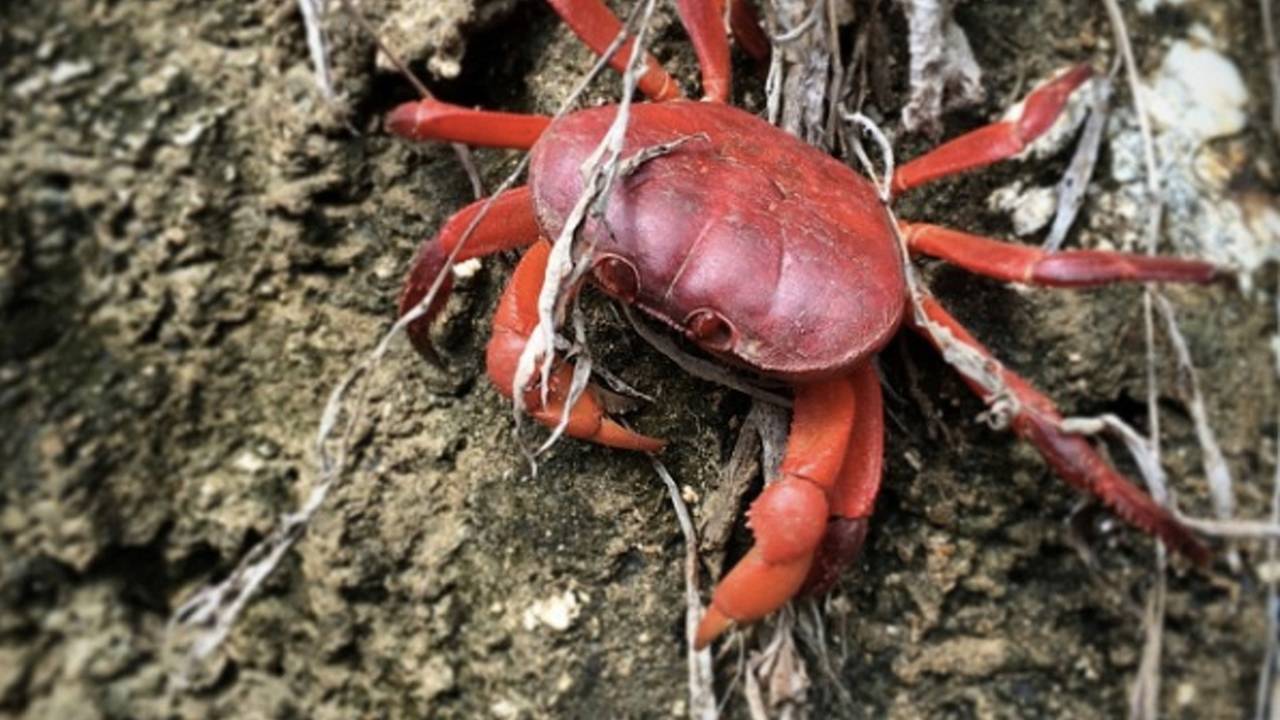 So, off I went, dodging yet more potholes in the pouring jungle rain on Oaxaca’s MX175, winding through mist-enshrined mountaintop villages known for mescal, psychedelic mushrooms, and rich, mole-saturated food. Pockmarked stretches of half asphalt-half dirt kept my speed to a crawl, but the rich earthy smell of the air and the occasional jaw-dropping view kept me awestruck enough to enjoy every second of the ride.

It was 6pm on the day I approached the little dirt road I was told to be mindful of. I was scared shitless of it. But the only alternative was to park Ripley somewhere close to the highway or in a nearby town, risking her getting stolen or stripped. Nope. Not an option. So, down the mountainside I went, into yet another unknown. 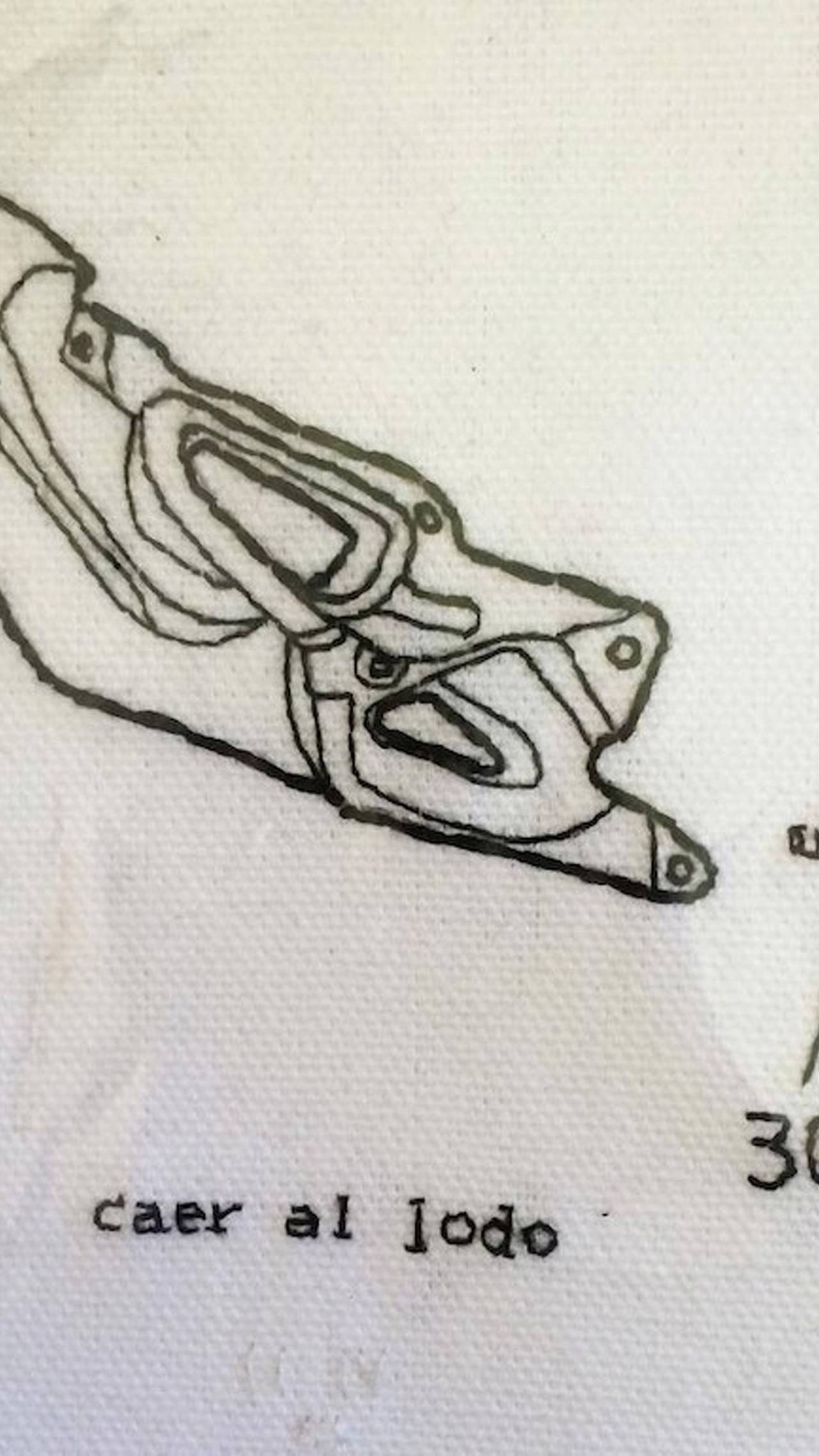 “Well this seems alright,” I thought, as I passed through a village – the road wide with just a subtle downgrade that looked pretty navigable for as far as I could see. About 2 km in, I rounded a corner and it all changed. Dramatically. Torrential rains from the previous three weeks had cut deep trenches in the center of the road, where mini boulders collected, dropped there by speeding currents. The village was gone; in its place were steep mountainsides covered with vines and banana trees that wouldn’t do a whole hell of a lot to stop me from plunging to a colorful fate – sure to generate all sorts of fabulous stories amongst local villagers – were I to screw up.

Up and down, and up and down. Then came the hotel’s cobblestones, which went up and down some more. I probably lost 20 percent of my rear brake pad trying to keep her steady while my already soaked body sweat its weight in bullets under my gear. Then suddenly it flattened out into a soft, sandy parking area surrounded by small palm-frond-roofed huts, where I could finally stop. I was shaking uncontrollably. 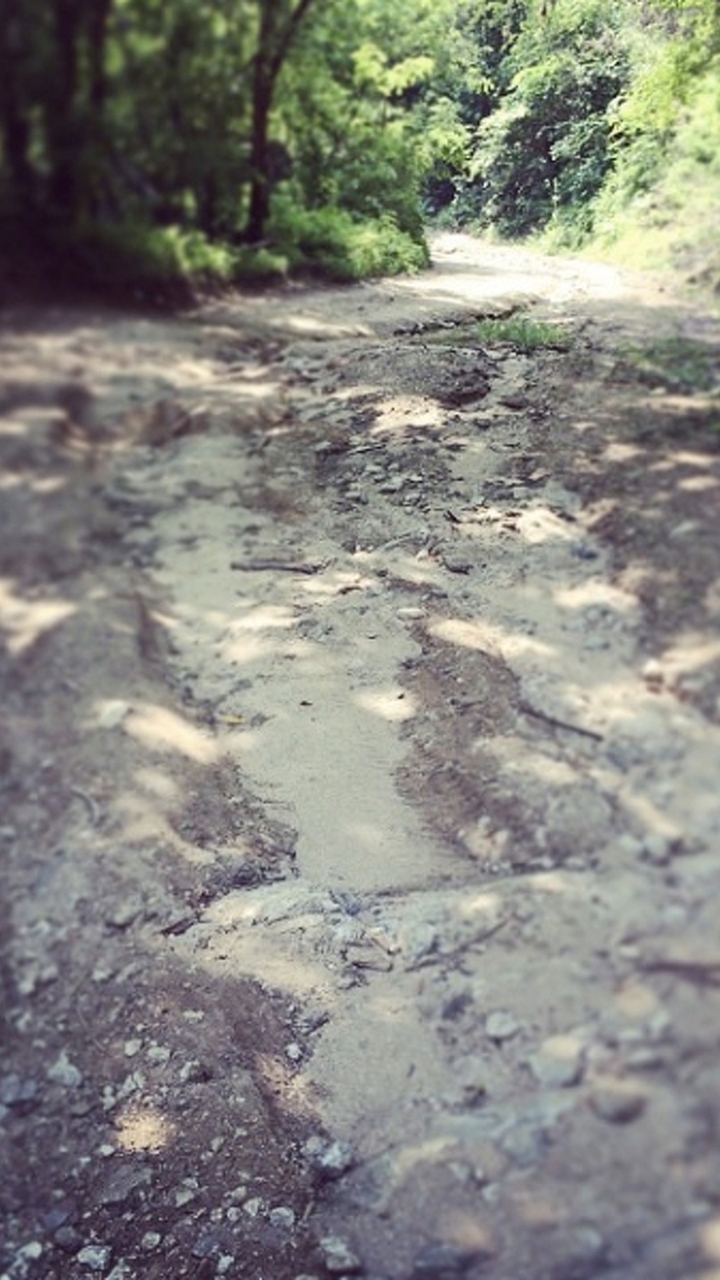 I tried not to think about how I was getting back out of there. The rest of Mexico had thus far proven how lame my dirt skills were, despite my looking like a reject from The Long Way Around (what with the oversized adventure-touring bike and filthy armored riding suit). I went looking for a stiff drink.

Bahia de la Luna (of course I'm going to link to my friend's resort) made me forget my fears for the few days I was there. The couple running it put me up in a little hut just a few feet from the beach, so I could walk out onto the sand in my bare feet. The turquoise waves could suck the wind from an unwary swimmer’s lungs, but they were warm and it felt great to be tossed around by them. And George, my hotel owner friend, kept a special bottle of mescal, hidden in the back of the bar, with scorpions floating at the bottom – their black angular bodies magnified by the thick glass. You’d think one taste of that would give me the courage I’d need to leave, but not quite. 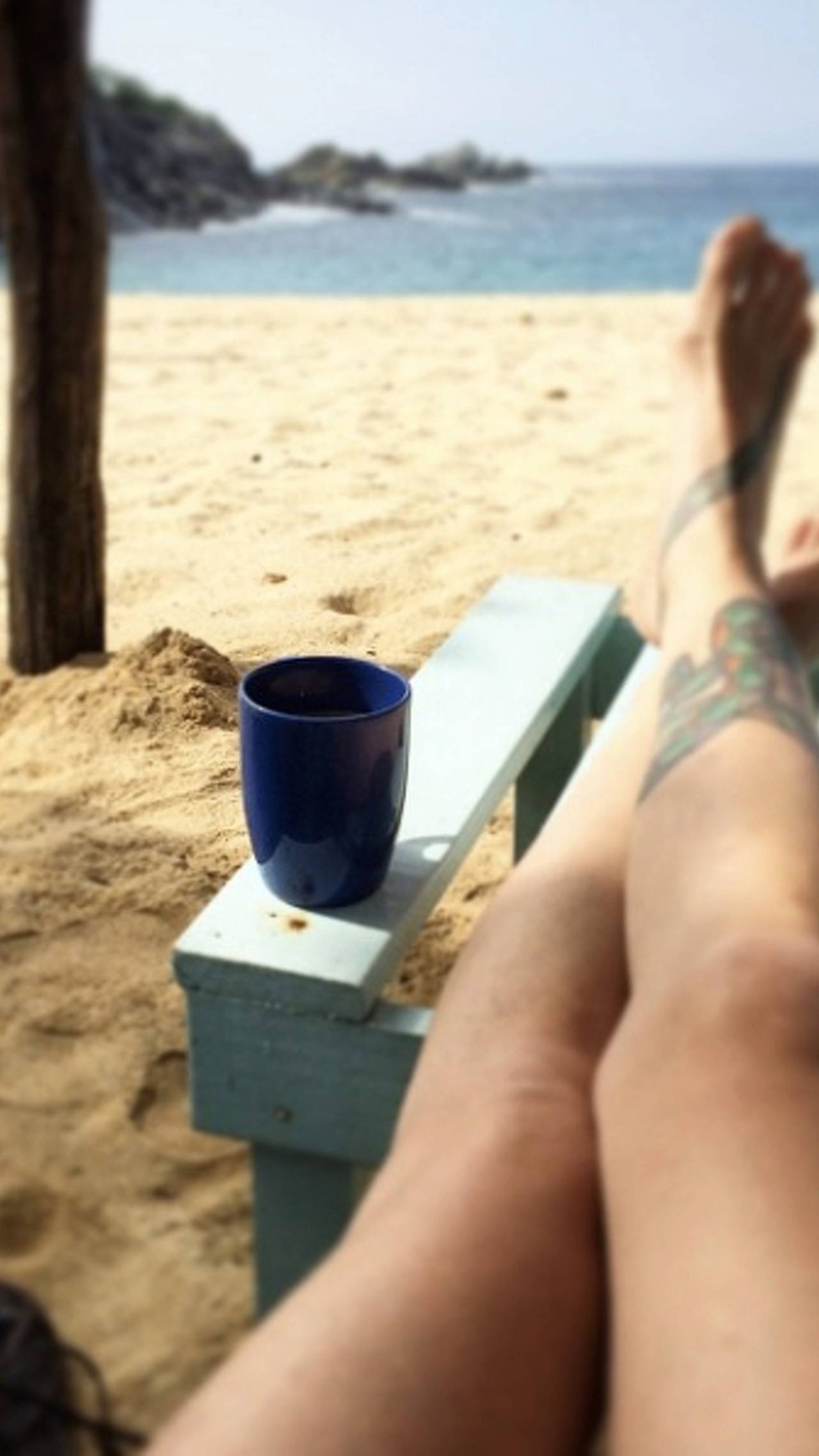 On departure day, sweat poured down my face inside my helmet as I fired up the loaded Tiger. Could I do it? Could I re-imagine my motorcycle as being light as a feather, smooth out my twitchy throttle wrist, rise up out of that seat, and give the bike what it needed to climb those 30-degree rutted, rocky switchbacks without crashing (and/or plunging down the mountainside)?

I managed to get about a half-kilometer up. With one fateful moment of hesitation, my front wheel found an especially deep rut. I fell downhill so hard that the impact snapped in half the single metal bracket attaching the entire front end to the bike’s fork. Thanks to Coco, the hotel’s cook and general manager, three grounds maintenance guys had followed me up, as we all knew the chances were pretty damned good this would happen. Together, the four of us lifted the bike up and beheld the instrument cluster, headlight assembly and windshield dangling from the bike’s frame like a head lolling from a broken neck. 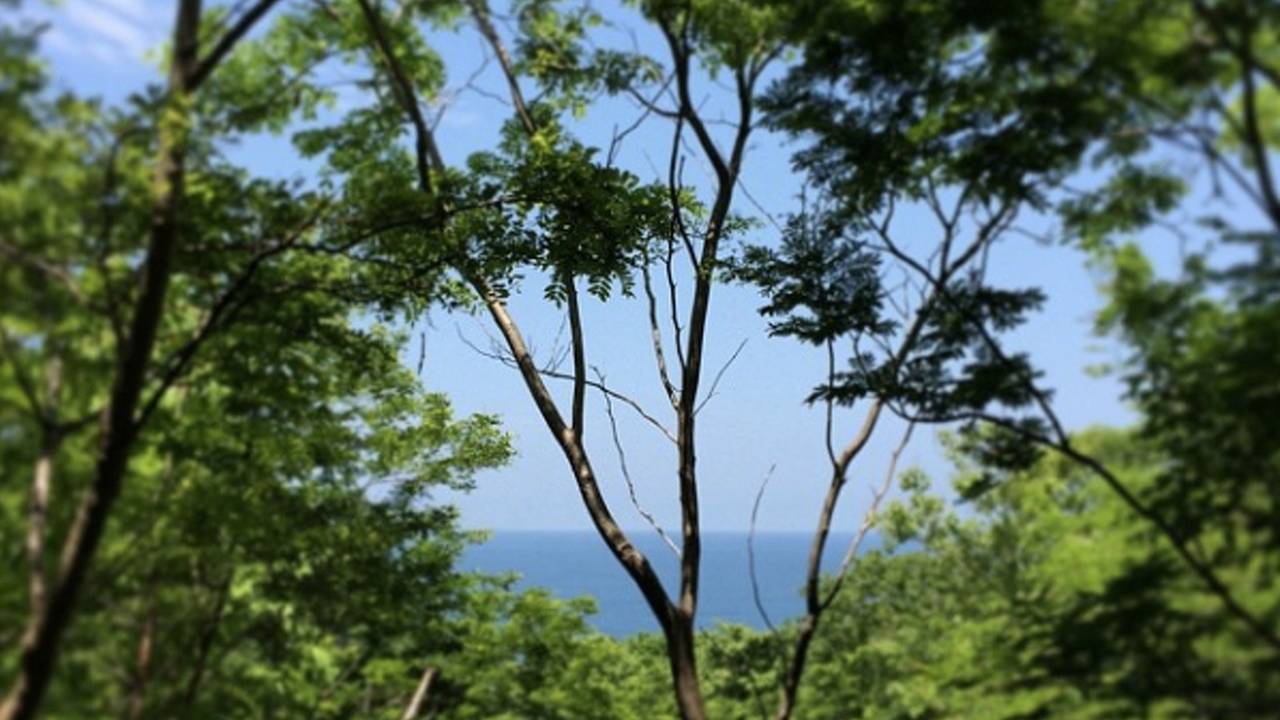 Given my recent rear sensor outage experience, I assumed, with a sick feeling, she was dead.

Instrument cluster – shot. Windshield – scratched beyond recognition. Headlight assembly – cracked in half, revealing color-coded wires like nerve endings not meant to be exposed. But when I held my breath and hit her ignition, she fired back to life. 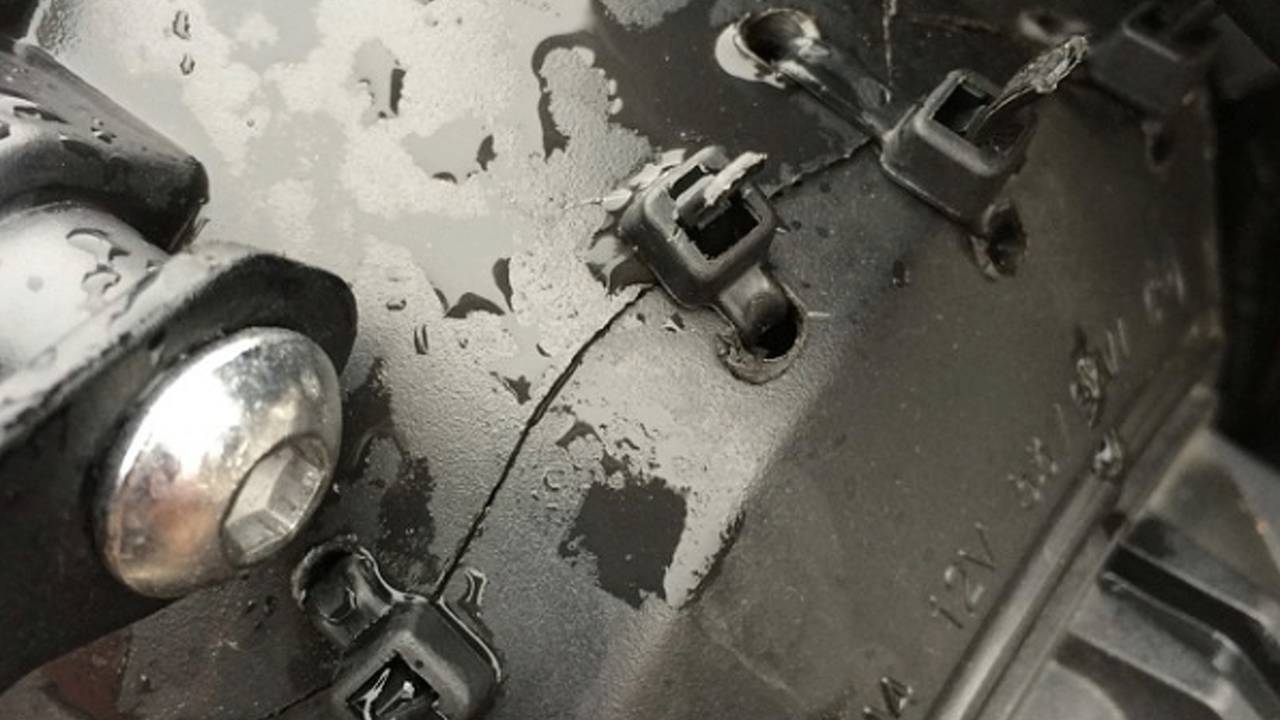 Coco and his wife Lupe took care of me for two more days while an auto-body guy in the nearby town of Pochutla stitched Ripley up with zip-ties and grommets like some late-generation Frankenstein. George, who had invited me to his hotel as a special guest, and had also advised me on my route through Mexico, comforted me over the phone.

“Now you have another story to tell. I have no doubt there are many more to come.”

Ripley got me back to the United States, scars and all. In fact, I put roughly 5,000 more kilometers (3,000 miles) on her, riding all over the southwestern U.S. desert and even down into Baja Mexico with a friend. But I’d incurred US $3,000 in damage I couldn’t afford to fix, and well, she was just too damned big for me. I could ride her to hell and back on pavement, but in technical situations (rocks, loose steep grades and sand… God, especially sand…), I fell apart on her. 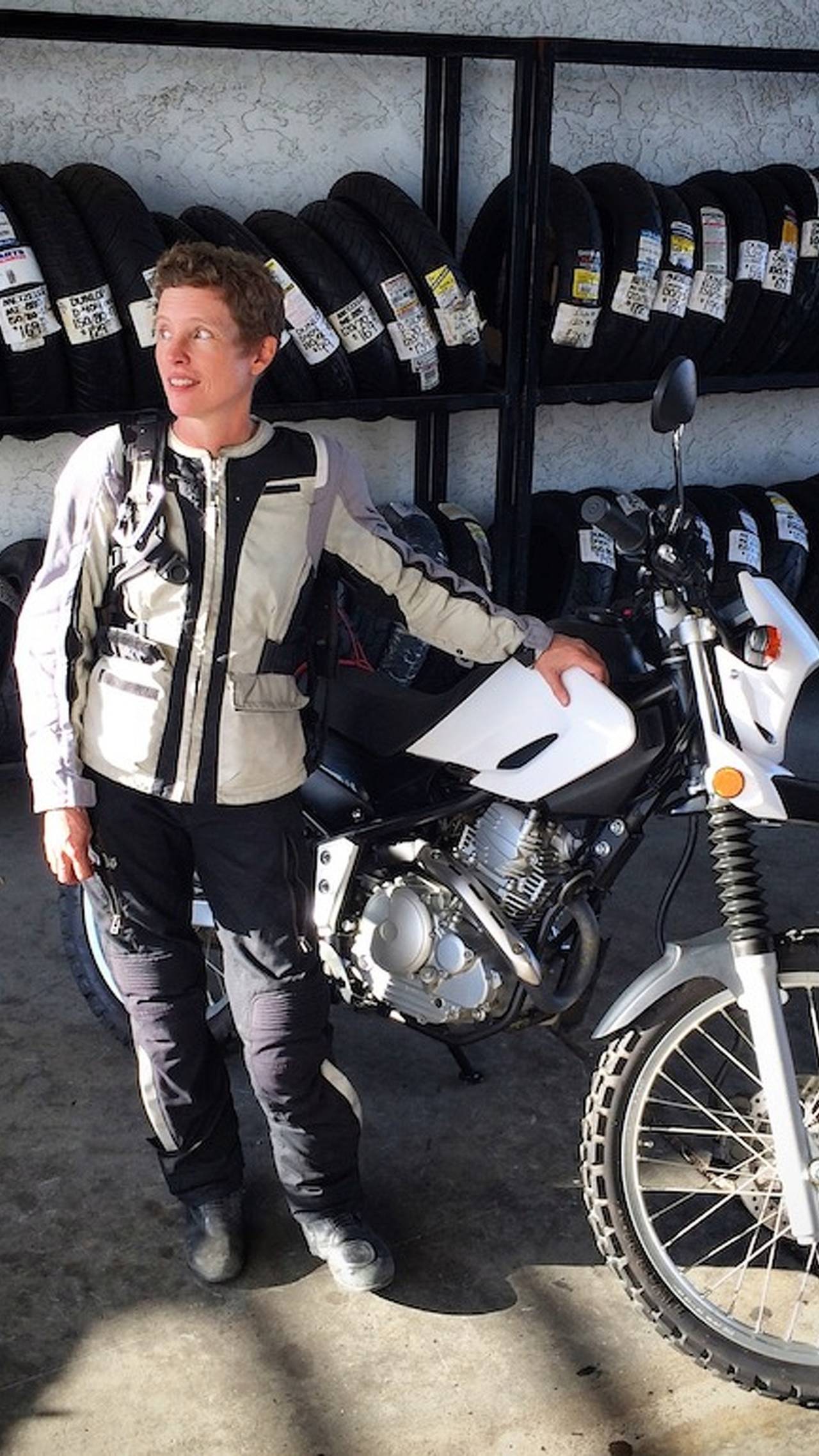 In late summer 2014, I sold her to a young man in Vietnam for $5,000, cutting my losses and buying a kick-ass little Yamaha XT250 with the cash. Some 70 kg (150 lbs) lighter and spry as a mountain goat, I now had something I could handle on tough roads and pick up out of the dirt when I couldn’t.

I named her “Guera” - a Mexican-Spanish slang term for “white girl” - a state of being I own completely, and on occasion, proudly. In 2015, she carried me all the way to Argentina.

The young man who bought Ripley takes her out every once in a while where he lives in the northern part of Vietnam. She looks beautiful now, with a new front end, clean, unscratched cowls and engine bars that don’t look as if they’ve been trampled upon by elephants. He kept my luggage on her, stickers and all. Some day I’ll visit her, while I’m riding across the globe for the next leg of my crazy moto journey and art project called In Search of the Frightening and Beautiful.

Watch out, world. The little white girl is coming… 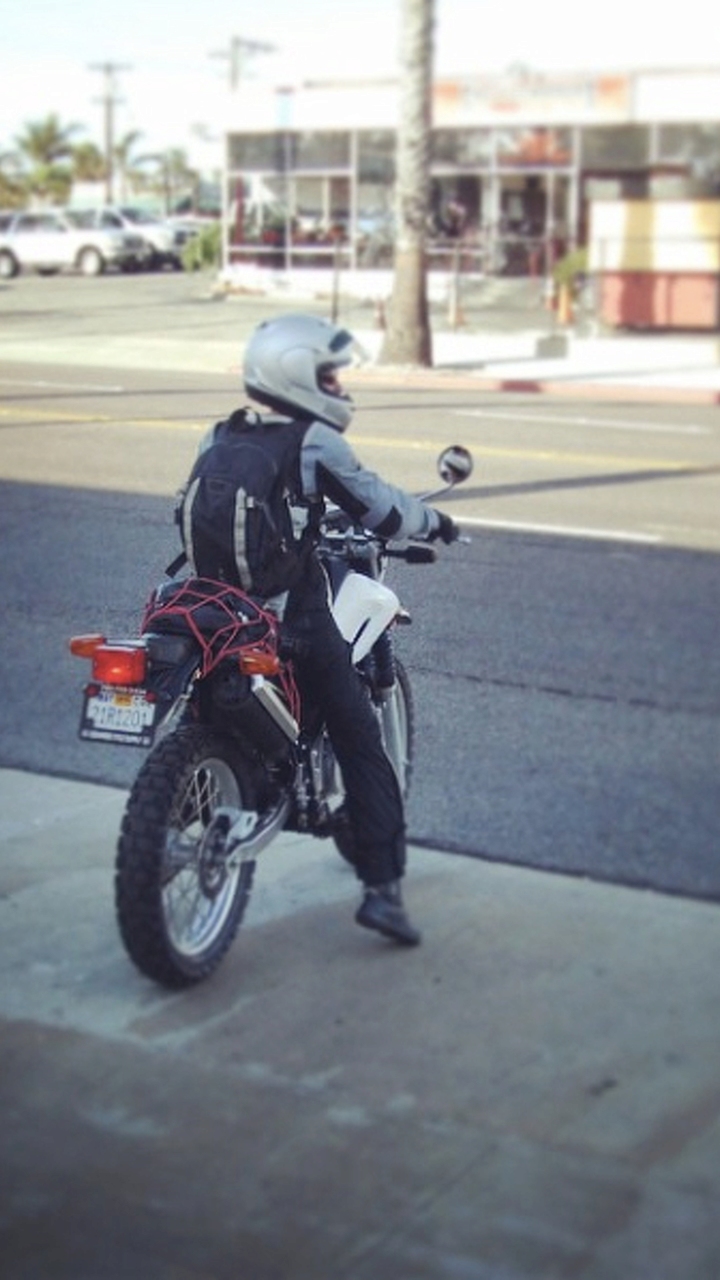