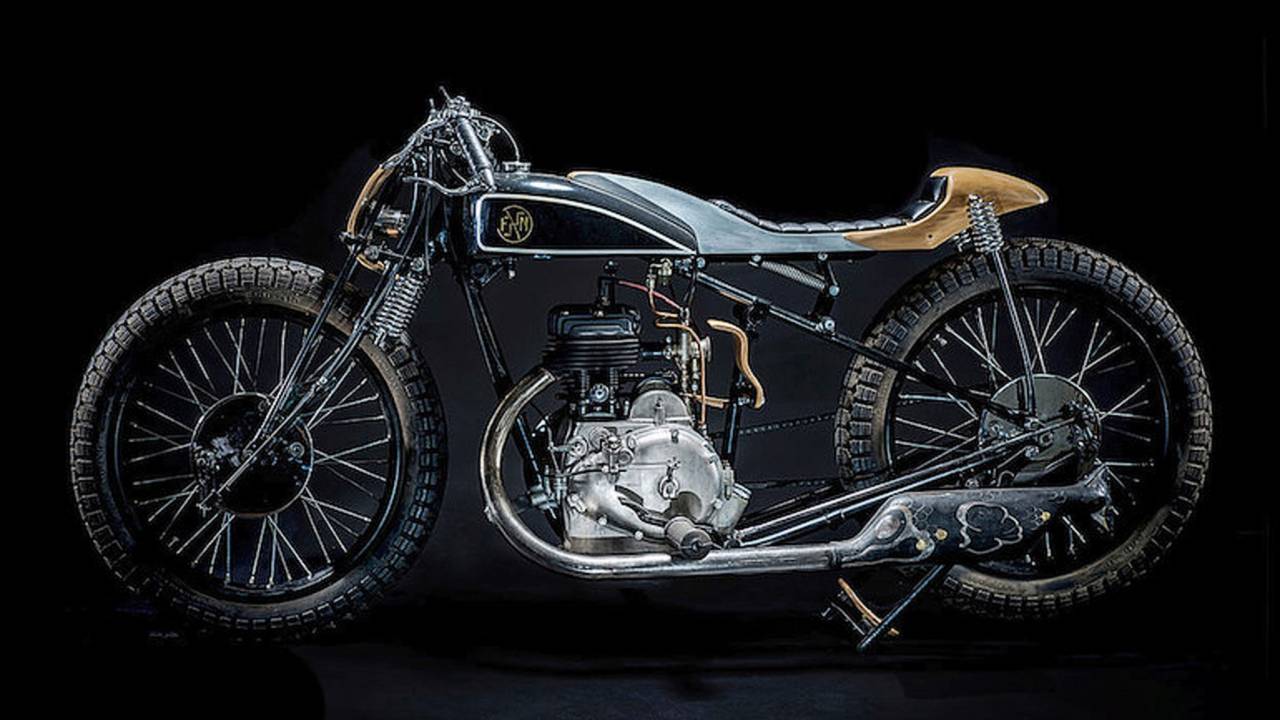 A Frenchman with the whimsical nom-de-plume George Woodman tarted up an 88-year-old Belgian bike with a wood grain finish.

Over in France, there's a custom bike builder with the distinctly non-Gallic name of George Woodman. A master of both metal- and woodworking, Woodman – whose real name is, sadly, not George Woodman but Sebastien Valliergues – takes weird, mostly forgotten antique bikes and turns them into symphonies of steel, aluminum, oak, and elm.Today's Bike of the Week is the fourth of Woodman's creations, and it's a real weird one – a 1929 250cc Fabrique Nationale M70.

Fabrique Nationale, or FN as it's typically called, is a Belgian munitions company famous for the FN FAL battle rifle and the Browning Hi-Power semi-automatic pistol. Founded in 1889 as the Fabrique Nationale d'Armes de Guerre, FN has been making high-quality civilian and military arms for more than a century. The company also built motorcycles from 1901 until 1967 (I had no idea. Guess it's time for some reading. -JM). During that time, FN produced the world’s very first production four-cylinder bike, and was an early adopter of unit construction engines. Though the Belgian marque was well known for its four-barrel power-plants, FN continued to innovate with its single-cylinder models, including the extremely popular M70. A rugged, well-built machine, the M70 was dubbed ‘The Sahara’ after two French army officers and a Belgian mechanic famously traversed around 4,000-miles of the North African desert aboard 348cc M70’s.

The M70 also boasted pretty impressive specs on paper, with a reported top-speed of close to 60mph and a claimed 112mpg. More importantly, FN’s “Sahara” was incredibly reliable. The reputation for speed, efficiency, and reliability made these bikes attractive to buyers. It also very likely played a part in Woodman's choice of such an obscure bike for his project.

“I was always very attracted to the very old machines from the ‘30s. I find that to be the most elegant period of vehicle design, especially the first racing bikes,” Woodman explained.

After patiently scouring the interwebs and various classifieds, a beautifully restored 1929 FN M70B popped up for sale in Eastern France near the Swiss border. It goes without saying that many vintage moto-enthusiasts will scoff at the idea of chopping up a classic antique bike, but Woodman had an idea for redesigning the FN through the use of hand-made wooden and aluminum parts. He wanted to work with the M70B’s design, to gussy it up without creating a new beast entirely. The new wood and aluminum seat is one of the two main focal-points of this wood-clad one-off, the other is the hand-formed wooden cowl.

The aforementioned wooden front cowl houses the modern offset headlight and serves as a key aesthetic detail that gives the build much of its personality. Additional wooden components, such as a guard for the single’s velocity stack intake and a foot-catch for the bike’s stand, complete the bike's organic-mechanical look. A bespoke set of handlebars were created to give the bike a more race-oriented feel and riding position to go with the long seat. Because the FN donor had already undergone an extensive restoration just prior to Woodman coming into possession of it, the bike required very little engine work. The final step involved Woodman etching a fish onto the FN’s fishtail exhaust which is where this build’s ‘Smoking Black Fish’ moniker comes from.

READ MORE: Bike of the Week: Spirit of the Seventies’ KR750 Tribute

New wiring was run to the head and taillights and a new lithium ion battery was added to keep everything running. The manual spark advance and fuel mix controls were retained to give the bike a distinct, old-school charm.

Woodman is based in Biarritz along the coast of France, a town you may know from hosting the Wheels and Waves festival, and his bikes have run the popular ‘Punk’s Peak’ event which is held just a stone’s throw from Biarritz.

The Smoking Black Fish build is a great example of builders thinking outside the box. I also love seeing people take skills from outside the moto-world and incorporating them into a build, not unlike the engraving from last week’s Bike of the Week. Taking on an 88-year-old model project is pretty ambitious on its own, but Valliergues definitely proved himself with this FN. If his previous builds are any indication, this won’t be the last awesome, one-off, wood-clad custom we see from the Biarritz-based builder.

If you know of a bike that you think deserves to be RideApart's next Bike of the Week, drop us a line at info@rideapart.com