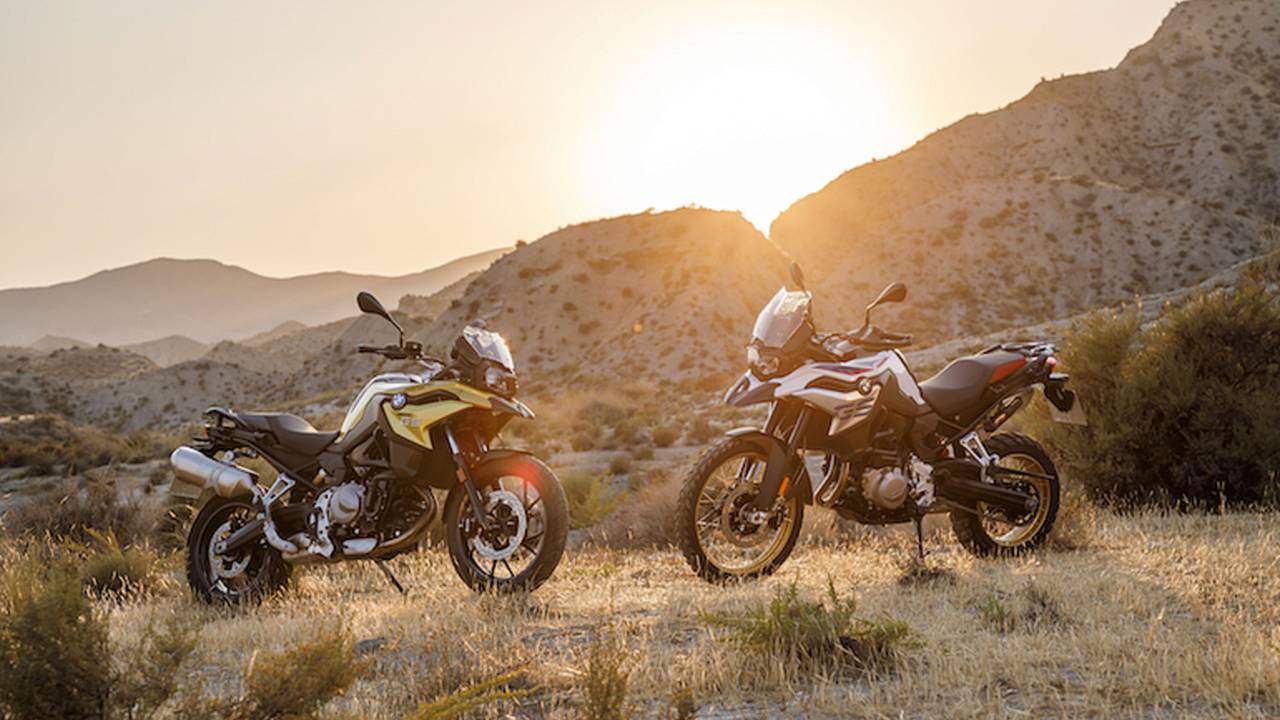 BMW makes numerous improvements to the popular middleweight twins to enhance both on- and off-road performance.

Ten years have passed since BMW introduced the F650/700/800 GS parallel twins, all of which were powered by a 798cc engine which cranked out from 70 to 85 horsepower. Unlike just about every other bike ever made, the numbers in the F-series' names didn't refer to the engine's displacement, but rather to trim level and power output. (That's...odd... -JM.). For Eicma 2017, BMW announced a pair of new, upgraded 2018 models with all new 853cc engines.

Over the past decade, the popular 750 and 850 models established a reputation for reliability and poise both on- and off-road. For 2018, BMW redesigned and re-engineered the middleweight GS models to bring them in line with its objective of creating an ultimate riding machine.

The F 750 GS is designed for riders who want a travel enduro, but one with a low seat height, a good amount of power, and high cost-effectiveness. Opposite this is the new F 850 GS which, besides offering more power and torque, blends excellent road handling with respectable off-road capabilities in one package.

At the heart of the 2018 redesign is BMW's new 853cc parallel twin. This new mill features dual counterbalance shafts and a firing interval of 270/450 degrees for optimized smoothness and emotional sound. BMW’s objective was to increase both power and torque while reducing fuel consumption, a lofty goal indeed. The 750 produces 77 horsepower at 7500 rpm, while the 850 makes 95 hp at 8250 rpm. The crankshaft’s 90-degree journal offset, 270/450 degree firing interval, and balance shafts work to absorb vibration and produce a satisfying exhaust note. Both are equipped with new anti-hopping clutch that reduces clutch effort and engine drag torque for smoother shifting.

The new engine is wrapped in a monocoque bridge frame that integrates the engine as a co-supporting element and offers benefits in terms of torsional rigidity and robustness. The suspension on both models is simple and sturdy, consisting of a forward-mounted inverted fork and a rear-mounted, double-sided aluminum swingarm sprung by a centrally-mounted spring strut.

Being thoroughly modern bikes, the 750 and 850 are both loaded up with electronic riding aids. Each one comes standard with Road and Rain riding modes, anti-lock brakes, and BMW automatic stability control. They can also be equipped with optional Pro riding modes – Dynamic, Enduro, and Enduro Pro (the latter of which is only available on the 850 – dynamic traction control, and banking capable ABS Pro systems.

“The F 750 GS and F 850 GS also feature a completely new look, which benefits from a more dynamic and masculine design," said BMW in their latest press release. "In addition to the basic version, the new F models are also available in Exclusive style variations. The Rallye style variant is exclusive to the new F 850 GS and places particular emphasis on its off-road capabilities.”

Both bikes can be further optioned with a wide range of equipment options are available. Factory options include, seats and windshields of various heights, new full LED headlights, and optional connectivity equipment with TFT display or eCall.

In all, BMW brought us a pair of fully modern, high-tech, dual-purpose motorcycles that seem to combine the best qualities of street and dirt riding. A winning combination that's sure to be just as popular, or even more so, than the bikes they're replacing.