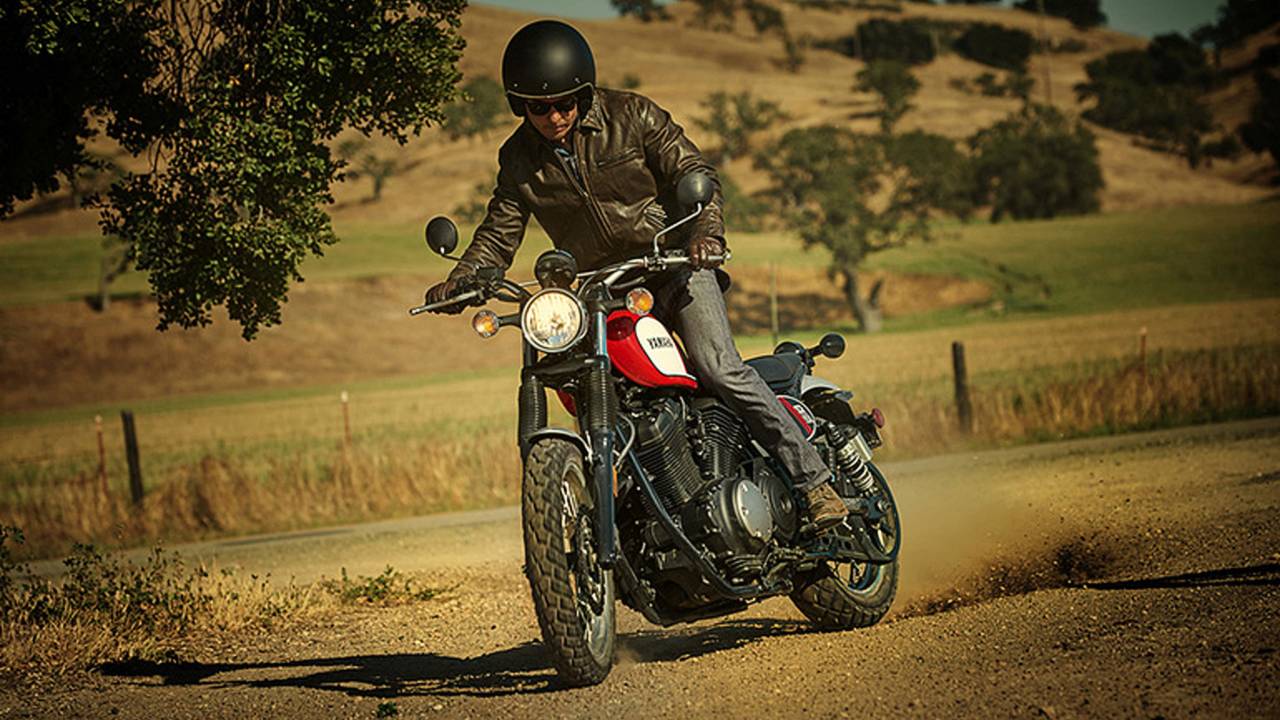 Yamaha has introduced its motorcycle model changes for 2017.

The Star cruiser brand has been officially phased out. Instead, many of those models have been rolled into the mix as Yamahas. There are a lot of changes in every category, but the BIG news is two new street bikes, which are sure to stir up excitement.

One is the new FZ-10 model (known as the MT-10 outside the United States), which essentially takes the place of the prior FZ-1 model. The other is the scrambler-styled Bolt SCR950, which is powered by the same 58-cubic-inch (942cc) air-cooled SOHC 60° V-twin as the rest of Bolt series, and shares many of the same components.

The FZ-10, meanwhile, has a muscular central core that highlights the machine’s power and aggressive futuristic styling. The FZ-10 is powered by a 998cc inline four-cylinder engine and features the same crossplane crankshaft technology developed in Yamaha’s flagship YZF-R1 superbike, making it the new king of the FZ series.

The engine's been tuned specifically for the FZ-10, with more low- and mid-rpm torque, yet still promises a lot of top-end horsepower. The FZ-10 also features YCC-T ride-by-wire throttle system and D-MODE, which lets riders choose their preferred engine response at the flick of a switch. The FZ-10 even includes cruise control for improved highway cruising comfort.

With all that power on tap, an advanced Traction Control System (TCS) assists the rider in managing grip on various road conditions by modulating throttle opening, ignition timing, fuel delivery and other parameters. And like the YZF-R1, the FZ-10 uses an aluminum Deltabox frame to create a strong, lightweight and responsive chassis for agility, on a compact 55.1-inch wheelbase.

The FZ-10 features a fully-adjustable inverted KYB front fork and a four-way-adjustable, linkage-type KYB shock, with a wide tuning range . An advanced ABS system is mated to high-spec brake components, for strong braking with, Yamaha says, excellent feedback and control.

As you'd expect, there are plenty of genuine Yamaha accessories, including windscreens, chassis protection and other items. A standard 12V DC power outlet charges personal mobile devices or other electronic accessories. The 2017 FZ-10 will be available in Armor Gray and Matte Raven Black, and will retail for $12,999, with bikes available in Yamaha dealerships from late June.

The new 2017 Bolt SCR950 harkens back to the past with its low-profile seat, retro side number plates, fork boots and color accents. The SCR950 shares its engine with the rest of the Bolt series. Which means the SCR950 should offer good power and decent low-end torque. Twin-bore fuel injection is used on the SCR to deliver throttle response, with 3D maps for ignition timing.

A 2-into-1 exhaust pipe layout on the right side of the engine with an upswept muffler yields improved ground clearance. The SCR950’s wet multiplate clutch system feeds into a wide-ratio five-speed transmission. A compact belt drive sends power to the rear wheel.

Yamaha says the SCR950 puts the rider in a comfortable upright posture. A wide and tall crossbar-type handlebar should offer light steering feel, while centrally-mounted footpegs and a long, flat seat will allow the rider to move around a little.

An LED rear taillight adds to the stylish “neo-retro” look. Steel front and rear fenders allow for personalization, Yamaha says. The 2017 SCR950 will have a suggested retail price of $8,699 and will be available in Yamaha dealerships beginning in July.

Meanwhile, for 2017, the standard Bolt features a new flangeless fuel-tank design, as well as new wire-spoked, aluminum rims. The 2017 Bolt R-Spec adds a “Performance Bobber” attitude to the standard Bolt, according to Yamaha, with the addition of external-reservoir rear shocks, different colors and graphics, and a suede-type seat with contrasting stitching.

For 2017 the YZ250F gets new gear dogs, revised gear-tooth designs, and a host of smaller changes to the transmission to provide smoother shifting. Revised engine mounts and a reshaped swingarm pivot section on the aluminum frame improve rigidity, while 5mm lower footpegs help lower the rider’s center of gravity. Also, suspension settings have been revised.

In addition, a redesigned air cleaner cover helps prevent contact with the quick-release quarter-turn Dzus air box fasteners and provides tool-less access to the air filter, which is positioned to avoid roost from the rear wheel.

Yammie's 2017 YZ450F receives updated rear brake-rotor material for better heat resistance, durability, and braking feel. The YZ450F also gets a redesigned air cleaner cover with the same changes as the 250. The YZ250, YZ125, and YZ85 are all powered by a liquid-cooled, reed-valve inducted, two-stroke engines--back for 2017. The 2017 YZ250 and YZ125 both gain a new 270mm front brake rotor (up from 250mm) and new front brake pad material for better stopping power and control.

For added protection of the bike’s frame, the 2017 YZ250FX has a new plastic skid plate. Also for 2017, the YZ250FX has a new 270mm front brake rotor (up from 250mm) and new front brake-pad material. Front and rear dampers on the 2017 YZ250FX feature new, optimized settings to further boost overall suspension performance, while the front forks utilize an improved, stronger oil-seal system.

A new WR-style fuel-level sensor in the 2017 YZ250FX’s fuel tank combines with new fuel level and engine-warning indicators on the handlebars to provide ultimate convenience. The 2017 YZ250FX will be available in Team Yamaha Blue at a suggested retail price of $7,999. Bikes will arrive in Yamaha dealerships beginning in August.

A redesigned air cleaner cover on the 2017 YZ450FX provides tool-less access to the air filter, which is positioned at the front of the bike to avoid roost from the rear wheel. And, a new WR-style fuel-level sensor in the 2017 YZ450FX’s fuel tank combines with new fuel-level and engine-warning indicators on the handlebars.

The 2017 WR450F is equipped with the YZ450F’s rearward-slanted-cylinder design, with a reversed cylinder head and forward-positioned, straight intake. The WR450F has an enduro-specific exhaust silencer, an electric starter and main-switch-free electrical system, and an ECU tuned specifically for enduro racing. In addition, Yamaha claims its wide-ratio five-speed transmission and enduro-specific multiplate clutch are ideal for the rigors of tight woods riding and racing.

Finally, the two-stroke YZ250X, another of Yamaha’s off-road racers that is designed, engineered, and developed specifically for GNCC and Hare Scrambles competition, returns for 2017.

The ultra-lightweight YZ250-spec frame is a combination of aluminum castings, forgings, and extrusions that Yamaha says provide the "perfect balance" of rigidity and flex. A fully adjustable, speed-sensitive, KYB suspension has been tuned specifically for the needs of cross-country racers. The 2017 YZ250X will be available in Team Yamaha Blue and will retail for $7,499.

There are no real changes to the 2017 TW200, which will be available in Mineral Blue.

Also offered in Mineral Blue for 2017 is the fuel-injected XT250, which is also mostly unchanged from previous years.

Available in Team Yamaha Blue and directly descended from Yamaha’s YZ-F motocross bikes, as well as its off-road WR models, the dual-sport WR250R delivers a little more emphasis on “sport,” according to Yamaha. Not exactly an enduro model and not a streetbike, the WR250R is designed for enthusiasts who ride off-road more than on.