How Laura Got Her Groove Back

After a disappointing year racing, Laura though she'd lost her love of motorcycles. Thankfully, a day at Laguna Seca aboard a Ninja 400 proved her wrong.

I’ve been amateur road racing for three years—two as a novice and one as an expert. Even though I raced a little Ninja 250, I really developed more refined riding skills and speed as a novice and looked forward to my expert year to fine tune my skillset and pick up the pace even more.

I started that year off pace (two to three seconds of my personal best lap times), and it slowly diminished as time went on. This happened because I crashed twice that season. I knew what I did wrong, I tried to be better because of it, but that didn't happen.

By the last race of the season, which was in October 2017, I was mentally checked out—I wanted off and out. It’s hard for me to write that last sentence because it’s the first time I admitted this publicly. How can someone who was obsessed with two wheels for six years (I’ve now been riding motorcycled for seven), suddenly want to distance herself from them?

I think it was because I put too much pressure on myself and had too many expectations of my performance when it came to racing. When I didn’t meet those expectations, I associated negativity to the sport. The final nail in the coffin was crashing twice in the season—that just ruined my confidence. I mainly got it in my head that I’m not a skilled or good rider, so why even bother? 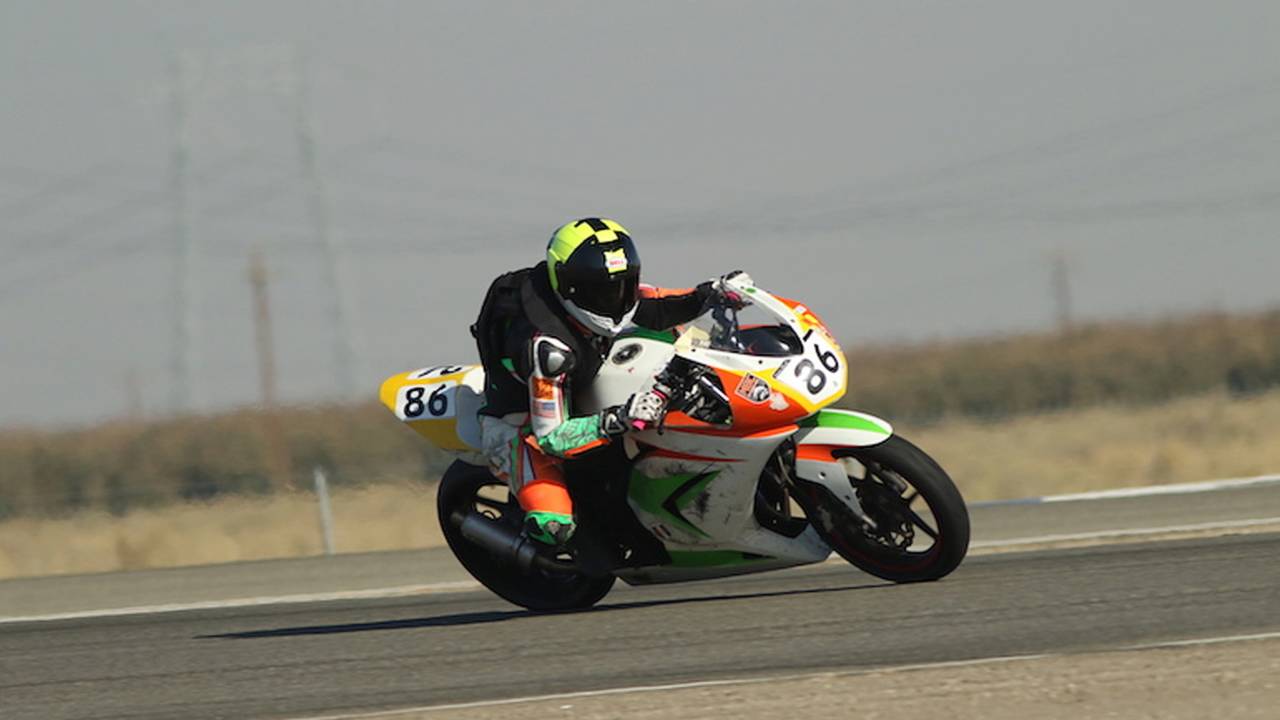 This was my last race and I can even tell from this photo that my confidence took a hard hit. (Photo by Oxymoron Photography)

Riding my FZ-09 on the street didn’t produce the same excitement, but I didn’t think too much about it because I was just commuting on the bike. By the time December rolled around, my bike sat in the garage, and eventually the battery died while collecting cobwebs as winter came and went. I’ve ridden my husband’s KTM Super Duke since then, and I even got the chance to ride Kawi’s H2 SX in April. Sure, I like/liked riding these bikes, but the feeling wasn’t the same as it was before: I just didn’t care to be on a motorcycle as often as I used to.

Trying to Find the Love Again

Of course, when I realized that things were going south for me and my two-wheeled love life, I was upset. It’s been my identity for so long—who am I without motorcycles? What made the thought of potentially letting them go possible was my other passion for fitness, which was starting to take over my free time.

Even though I’ve constantly toyed with the thought of selling all my bikes and being a former rider/racer in a past life, I wasn’t going to give up without a fight. I had to make 100 percent sure that this was what I wanted.

A few months ago, I decided that yes, I will sell all my bikes, which includes the FZ-09 and Ninja 250. However, the plan was to sell them to buy a Kawasaki Ninja 400. At that time, I figured that I’d start new with a bike that I could ride on the street and track. I could also take as much time as I needed to get back to where I was almost two years ago. The idea inspired me and got me a bit excited, but there were still doubts about if this would fix my issue.

CHECK OUT: Why Motorcycles are Better Than Cars for Track Days

I did miss going to the track, so I did a track day about a month ago and things started to feel better. For example, I switched back to DOT tires and I made myself do all of the sessions for as long as possible. Again though, things weren’t feeling like they used to—the mental block was still lingering.

Taken early June of this year. I was starting to feel better, but not where I used to mentally be. (Photo by Got Blue Milk Photography).

What’s Lost Can Often be Found

Even though my riding was in shambles, I still love watching motorcycle racing and always will.  I love the sounds, smells, and action that goes on, so when I got the chance to go to the World Superbike races at Laguna Seca I didn’t hesitate to say yes.

What made the weekend even more special was that I was again invited to the Pirelli track day the following Monday after the races. Like last year, there were multiple brands and styles of bikes to ride. When it came to how I felt about the actual track day, I wasn't as thrilled as I would have been if we were at another track. Laguna Seca is my least favorite track, but that’s only because I haven’t ridden it as often as others so I naturally suck at getting around it.

This track day was put on to showcase Pirelli’s all-new Diablo Rosso Corsa II tires, which were designed to optimally perform on both the street and racetrack. These tries are made with multiple compounds that help it be a versatile tire for the everyday commuter and track enthusiast. I’m a Pirelli fan—I love and trust their products—so having Corsa II tires on all the available bikes put me at ease, especially when I took out the Ducati 821 Monster—a bike I've never ridden by a marque I've never ridden—to start.

The day didn't get started until 1:00 p.m. due to dense fog and lack of visibility. The track was still a bit damp, but thankfully it wasn't super slick. I took my time with the Monster since it was my first session out on a track aboard a bike I wasn’t familiar with. After that session, I was slated to take out a Kawasaki Ninja 400.

There wasn't much chemistry between the Monster and I...

This was it. This was the bike that’s supposed to help me get my groove back. What if it didn’t, I thought? Will this one 20-minute session be a disappointment and seal my two-wheeled retirement?

I hopped on the green machine and immediately felt at ease—the ergonomics are obviously similar to my 250, but it felt more stable. Also, everything was just better—the suspension, the brakes, the power, the tires, etc. As I made my way onto the track I didn’t hesitate, like I did with the Monster, to open the throttle. I started carrying more corner speed, and by the time I made it onto the front straight I was giggling with delight. This was the feeling I used to feel, and damn did I sure miss it. Things were starting to click, making me more and more confident as I tackled Laguna Seca.

I was about to complete my second lap when they threw a black flag because a few people blew sound—at Laguna, your bike can’t be louder than 90db. I was devastated because I thought my time with this fun machine was done. I rolled back into the Kawasaki pits with tears stinging my eyes, but fortunately a rep told me that they were letting people back on track. I darted back on and turned two more laps before they waved the checkered flag to end the session.

I felt a ton of emotions as I returned the Ninja 400, but the main one was relief. Before this day, I didn’t know what my future held when it came to motorcycles. Let me tell you though, I’m ecstatic that I now know that my passion has been restored. I plan to purchase a Ninja 400 as soon as I possibly can, and the thought just sends butterflies fluttering in my stomach. 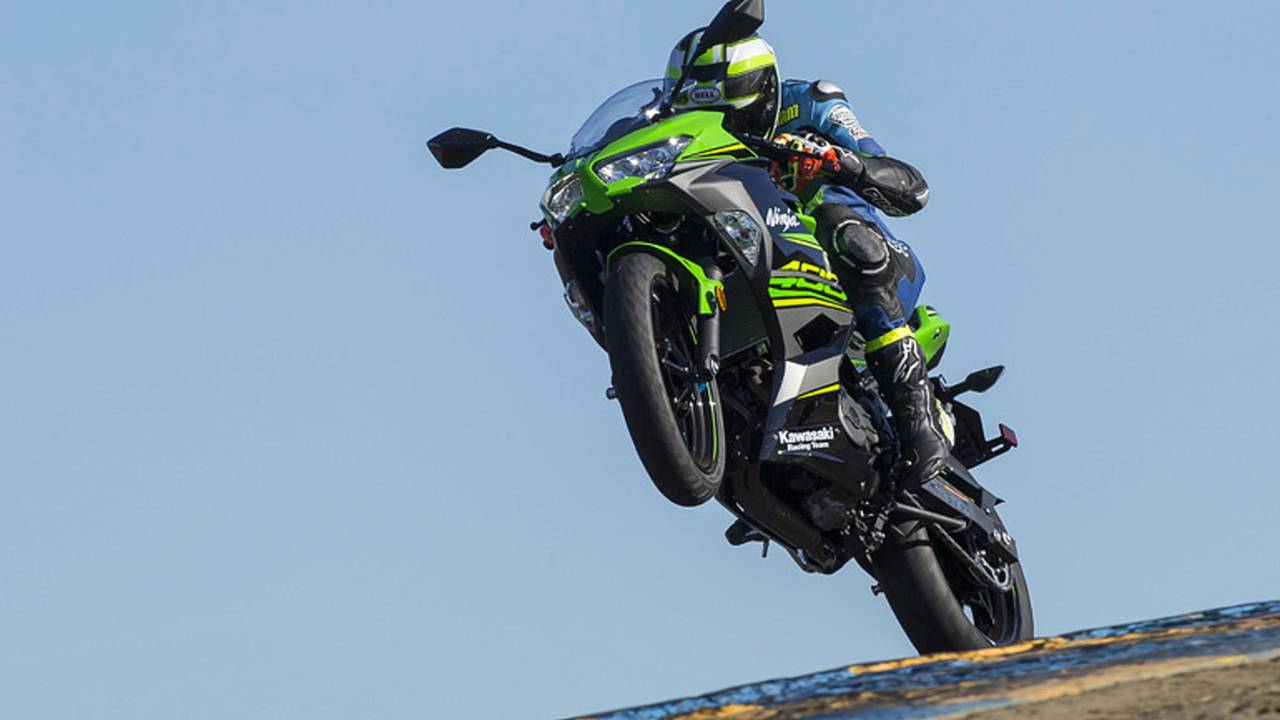 Since there weren't any on-track shots of the Ninja 400 and I, I figured I'd show off Adam's dope wheelie.

I share this story because I’m sure there are folks out there (and not necessarily motorcyclists) that have lost their passion. It’s a devastating time when this happens, and sometimes it can’t be restored.

If it’s worth fighting for, however, definitely do. My main takeaway from all of this is to not give up on your passion while you search to restore it. Realize it might take some time to recover. Just be patient—good things are worth waiting for in the end.