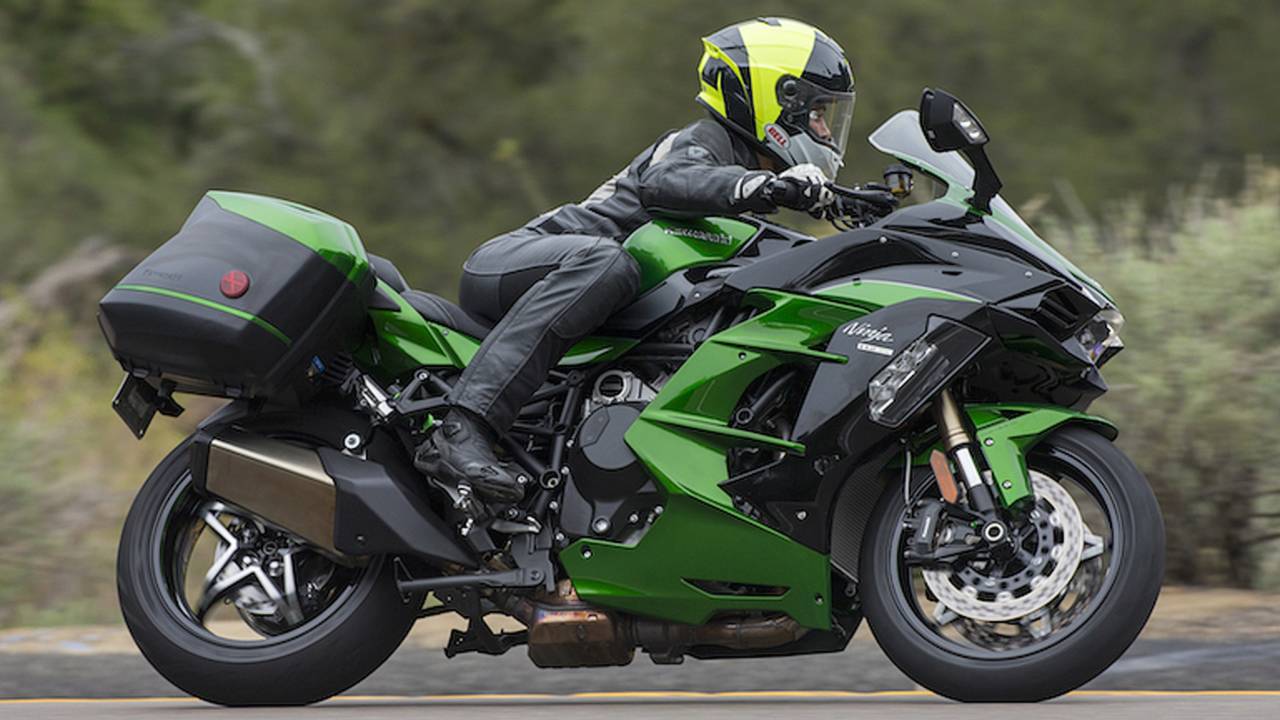 Kawasaki delivers their most advanced hypersport motorcycle for the everyday rider

Back in 2015, Kawasaki showcased the fastest production motorcycle on the market—the Ninja H2R, which featured a supercharged, 310 horsepower engine. It was also strictly made for track riding. Shortly after, Kawasaki delivered their street-legal versions of the H2R with the Ninja H2 and H2 carbon. Not content to rest on its laurels, Team Green decided to take it a step further in 2017 and created the Ninja H2 SX, a supercharged sport-touring bike for the every day rider.

Kawasaki pulled out all the stops on this bike. The goal was to create a supercharged model with increased functionality and wider rider appeal. To do that, they re-tuned their supercharged engine for street-ability, stuffed a ton of electronics into it, slapped some luggage on it, and designed it to be sporty-looking yet super comfortable for long rides.

Kawasaki did a great job delivering on the looks department. The H2 SX is a beautiful, fully-faired bike that comes in a Metallic Carbon Gray/Metallic Matte Carbon Gray standard with a Special Edition (SE) that comes in an Emerald Blazed Green/Metallic Diablo Black. The pictures of the SE don't do it justice—the green is majestic, y'all. And green isn’t a color I gravitate towards at all, but Kawi sure knows how to make this shade pop.

Look at this green. It's spectacular!

The bike definitely looks sporty, but just by looking at it, you can tell that it doesn’t have you crouched forward like you would be on a typical sportbike. The clip-ons are higher, there’s a taller windscreen, and the bike has a more spacious passenger seat than you'd find on the typical sporty bike. That said, looking at the passenger seat I don’t think I would want to ride on it for more than a few hundred miles at a time.

The front of the bike is really rad looking, too. It has three lights where the headlamps reside and there are two LED tower lights on the side. The H2 SX is also the first Kawasaki bike to have LED cornering lights. These light up based on lean angle and speed to provide better visibility on your trajectory path.

Approaching the Kawasaki H2 SX SE with the plan of riding it for 150-ish miles through San Diego’s twisty roads was a little unnerving. I haven’t canyon carved on two-wheels since November, and that wasn’t even on a sportbike (it was actually on a Harley). I should clarify that my unsettled feeling came and went as I learned more about this bike. Before the ride, I and four other moto-journalists got the scoop on the bike's electronics—and boy, is it loaded. Everything you could put on a bike to make it ride like a dream and as safe as possible is on there.

The first thing to mention is the cruise control, a first for a Kawasaki sportbike. The other goodies worth mentioning on here are the Kawasaki Traction Control (KTRC), which has three modes, with modes 1 and 2 allowing a certain degree of slip. Kawasaki Launch Control Mode (KLCM) is also a great feature on this bike since it helps dampen wheel spin so you don’t wheelie yourself off the bike and embarrass yourself in front of friends during a track day or race.

The H2 SX also comes with Kawasaki’s Intelligent Anti-Lock Brake System (KIBS) which monitors caliper and brake pressure to ensure that ABS pulses are as smooth as possible. In my opinion, the coolest feature on this bike is the Kawasaki Corner Management Function (KCMF). The KCMF helps the rider trace and maintain their line through a corner by monitoring engine and chassis parameters. This system is enhanced by a Bosch IMU that allows added precision to the KTRC and KIBS systems. In layman’s terms, this bike can manage and correct itself better than I probably can.

With all of this in mind, I hopped on the bike with a little bit more peace of mind than I had earlier on.

Unfortunately, the forecast called for rain all day, so I set the KTRC to Mode 2 and set the engine power to Moderate, a setting which allows 70-ish percent engine power for easier handling. After I let the bike idle for a few minutes, I took a few deep breaths and readjusted my brain to focus on the ride.

When I finally cracked open the throttle, one word came to mind: f**k. Then more thoughts flooded in like, "holy crap, this thing is super powerful, yet thrilling and super smooth." As I mentioned earlier, the H2 SX supercharged engine is de-tuned for the streets to provide better fuel economy and better low to mid-range torque. It’s also optimized for the day-to-day street commute by delivering smoother throttle response at low gears.

The H2 is well-planted in the corners.

As the ride progressed, I started to slowly get more comfortable with the power. Folks I got to tell you, this thing is no joke on power output (and I wasn’t even riding it at 100 percent!). I’ve ridden some powerful liter bikes in my life, and the H2 SX takes the cake. It also wins on the smoothest bike I’ve ridden. The H2 SX has a dog-ring transmission that uses MotoGP technology to produce better feel and allow for quicker shifts. Speaking of shifting, the H2 SX does come with a quick shifter, but I didn’t think of utilizing it since I don’t normally quick shift when street riding.

Designed to Handle the Streets

For a big bike, the Kawasaki H2 SX actually quite svelte, and when you sit on it you just fit right on it like a puzzle piece. Additionally, it’s not super tall—I was able to touch my feet on the ground and didn’t have problems holding the bike up at stops. It's equipped with the usual KYB-branded inverted forks that are adjustable for compression and rebound damping, and spring preload. The rear has a KYB gas-charged shock that’s also easily adjustable and easily supports the weight of luggage and a passenger.

On paper I didn’t think much of the suspension, but once riding the bike I was pleasantly surprised. Out of the many bikes I’ve had the fortune to experience in my seven years of riding, this bike has the best "out-of-the-box" suspension. For example, I'll admit that I was a bit clumsy going into a few corners since I was dusting off cobwebs—I either turned too early, too late or not enough. Thankfully, it was incredibly easy to correct my mistakes. I felt like all I needed to do was think about how to correct the corner and the H2 SX was like, “I got you!” All it took was a gentle push on the bars to turn more, or gently pick the bike up, and I was good to go.

CHECK OUT: Up Close and Personal With the Kawasaki Z900RS

The H2 is surprisingly stable on its stock suspension.

Once the H2 SX and I started seeing eye to eye, I was able to focus more on the ride and how the bike felt overall. On top of excellent handling, the H2 SX has a very comfy seat, great brakes, excellent Bridgestone Battalax Hypersport S21 tires, and amazing wind protection thanks to the tall windscreen. Yup—I was starting to mesh with this bike.

However, it's a lot of bike. For me at any rate. Sure the power is fun, but at the end of the day, I just don’t need that much power for everyday street riding. Fortunately for Kawasaki, I'm not their target consumer for the H2 SX.

The H2 SX starts at $19,000, while the H2 SX SE starts at $22,000, but it's loaded with a lot more goodies that the regular H2 SX doesn't carry. It’s definitely priced well for what you get, but it’s also far from what I would call affordable in the motorcycle world. I would say this bike is perfect for the rider who wants the latest and greatest technology, wants a fun sportbike to take out for a long weekend getaway, and has some extra cash lying around. I don't fit that bill, but if I ever do, the H2 SX SE needs to find itself in my garage.

Speed, handling, and poise in one great looking package.