Honda 600 Supersport History - From 500-four to 600RRShortly after the dust cleared from the big bang, the Earth cooled and the dinosaurs all died to...

Shortly after the dust cleared from the big bang, the Earth cooled and the dinosaurs all died to bring us oil, Honda introduced the world’s first middle weight 4 cylinder motorcycle, the 1971 CB500 Four. This bike was the original go to work on Monday-Friday, cruise the canyons on Saturday, and club race on any Sunday middle weight. 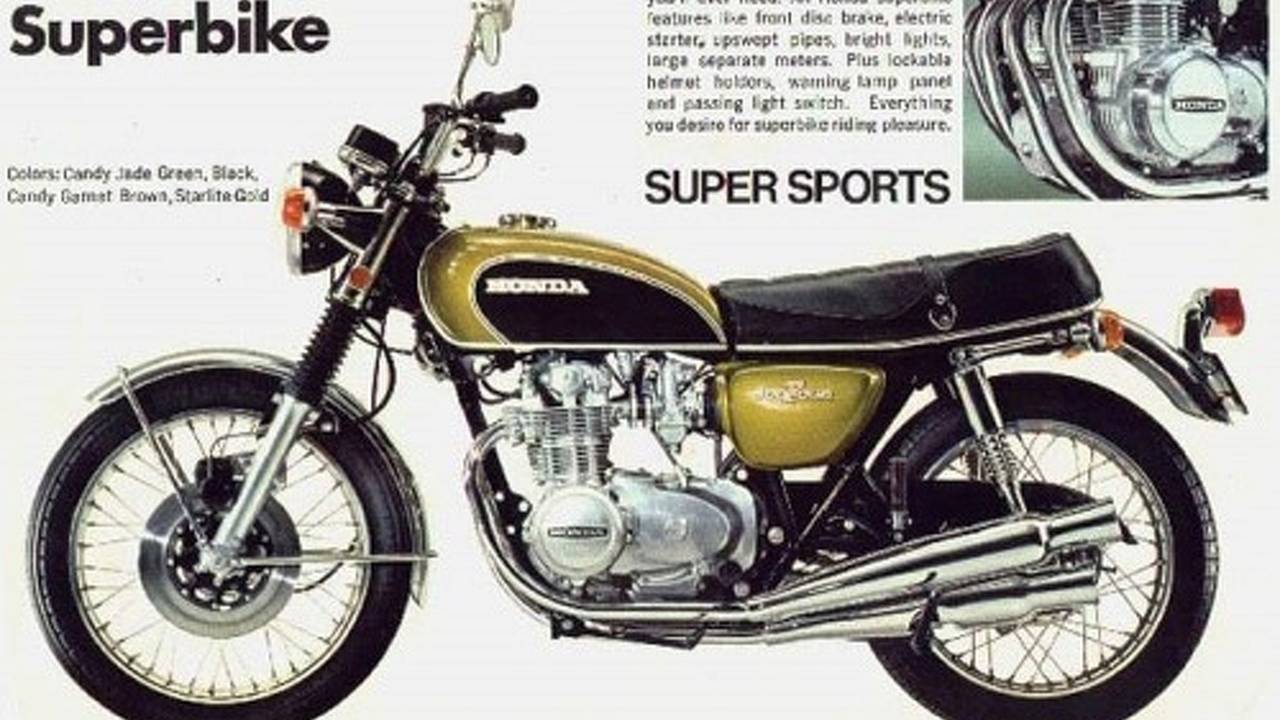 In 1974 it grew to the CB550, then got a bit confused and became the CB650 for 1979. Here in the USA we didn’t get the next evolutionary link (except for the duck-billed platypus of a Cb550 Nighthawk, with shaft drive and cruiser styling), but most markets got a bike called the CBX550, which was starting to evolve the markings of a true modern sport bike, despite its vestigial single inboard disc brake up front. 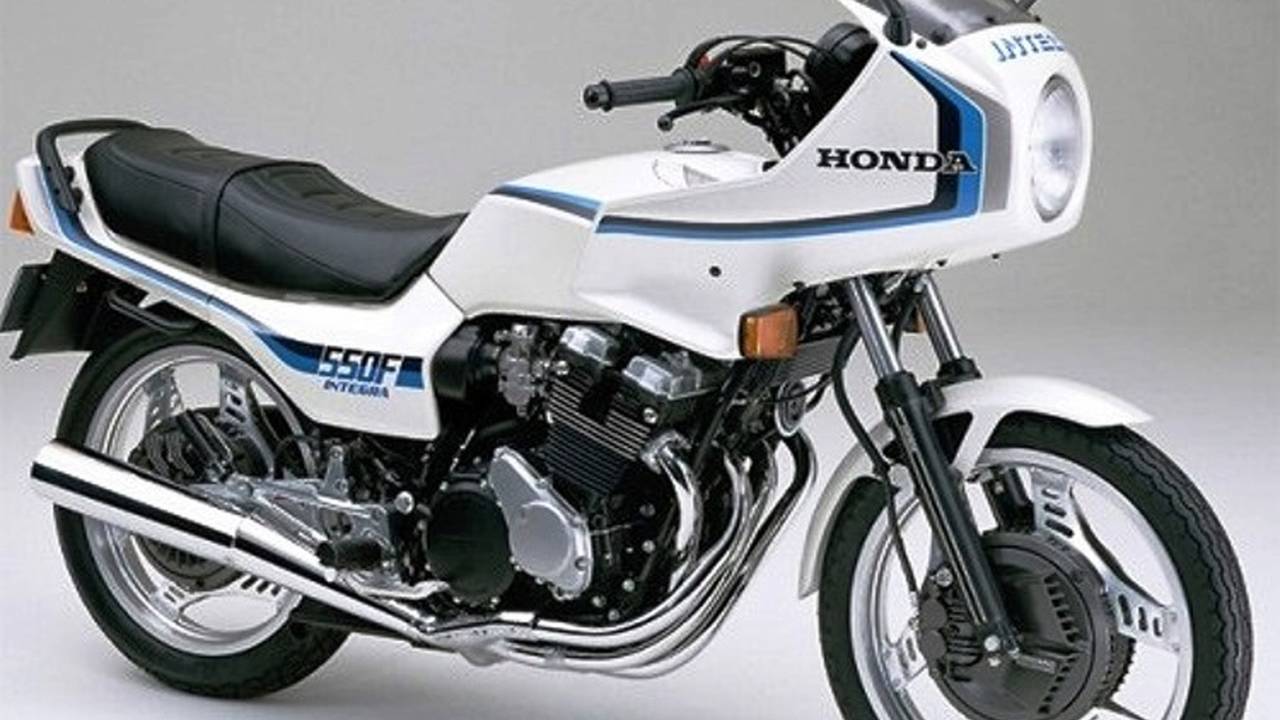 In the winter of 1986, right around Christmas, Honda with its tongue firmly in cheek teased us all on regular network TV with this 80s-tastic advertisement.

The Hurricane CBR600 was revolutionary. It was about 30lbs lighter than the 2 year old Ninja 600, and made more power. Honda managed to achieve the same dry weight as the GSX-R 750 without the expense of exotic materials and an aluminum frame. Despite its slick, racy looking, enclosed plastic body work, everyone agreed it had a riding position, and demeanor you could live with day in and day out as a commuter or sport-tourer. Honda even managed to make it get over 50 mpg, even when ridden aggressively. And it looked totally 80s. 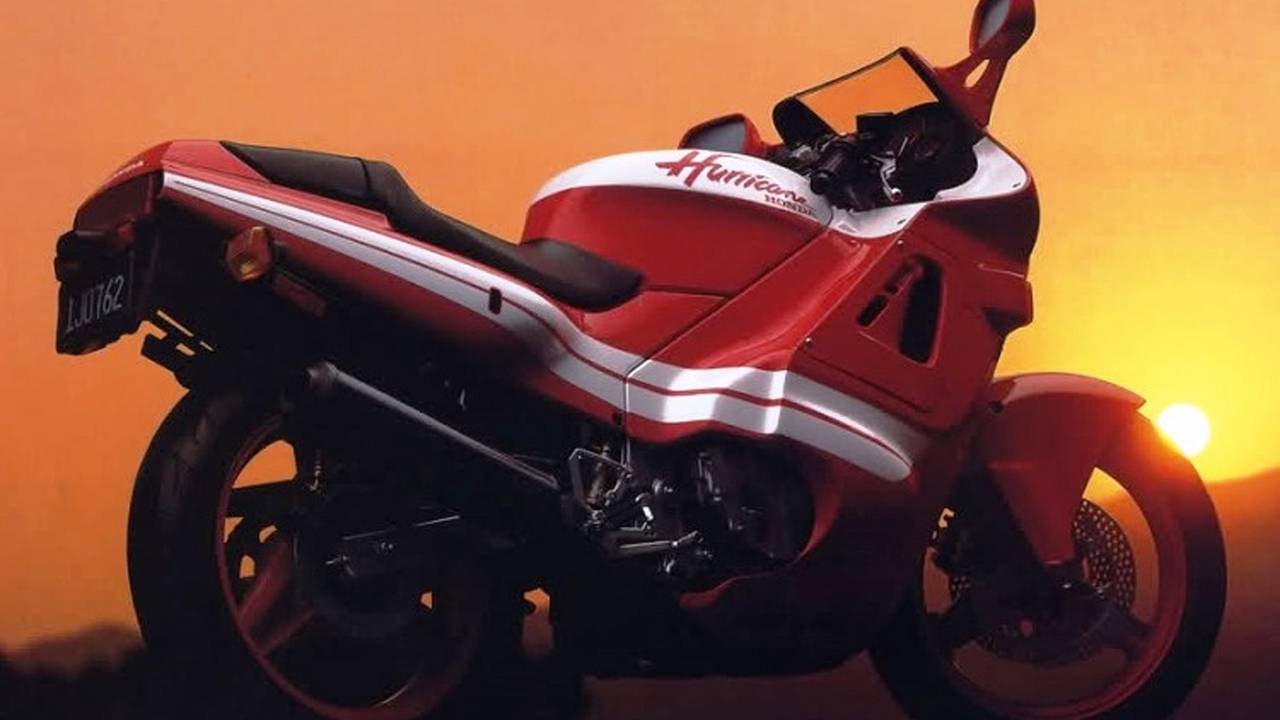 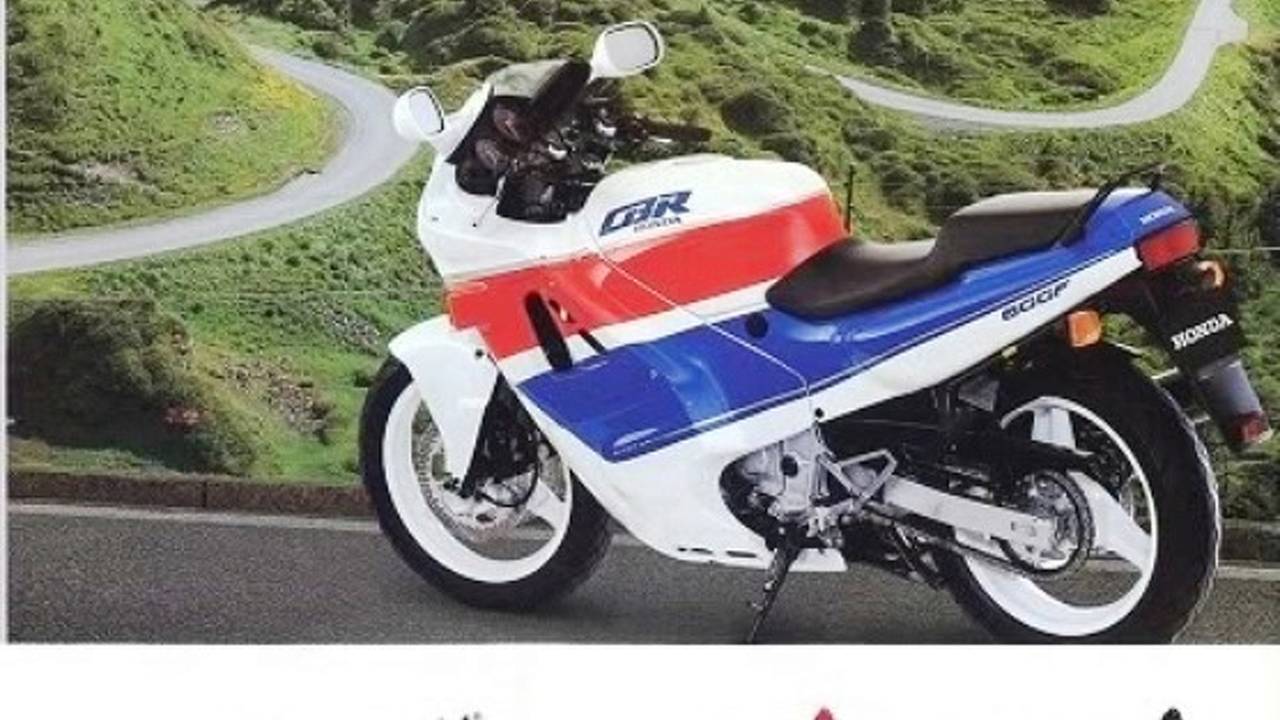 Except for some early fuel pump problems, they were bullet proof too, though the light weight drilled brake rotors are prone to scoring and warpage with heavy use. These bikes have been knows to go over 100,000 miles with just regular maintenance.

1987 and 1988 Hurricane 600s are identical in specs, but in 1989 Honda tweaked the suspension, tuned the motor and added about 10 extra horsepower. Any and all first generation Honda CBR600 Hurricanes are good bikes, so just look for the one that looks like it has been dropped the least amount of times. 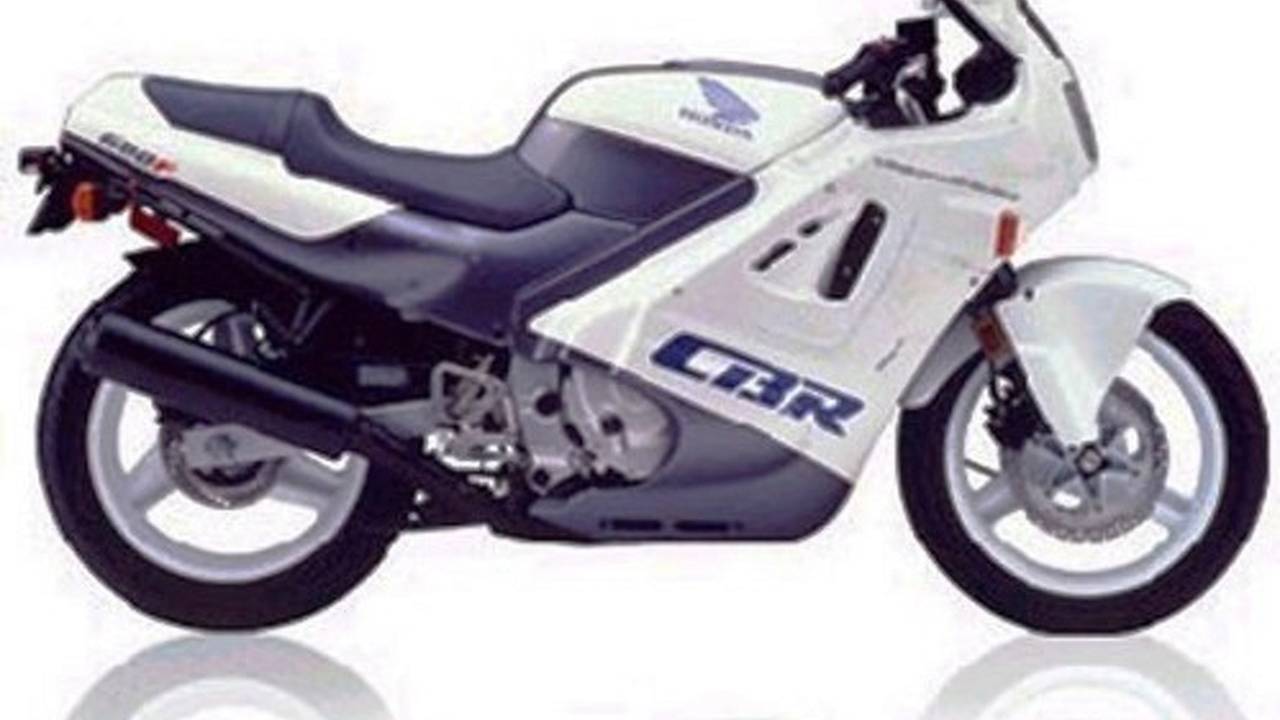 According to the NADA site, even an excellent 1987 Hurricane should only sell for about $2500 with good condition examples selling for less than $1,000, with 1989 and 1990 examples worth just a little more, but still less than $3,000 an excellent one.

How good is the CBR600F2? Racers still win club races on them to this day. Their suspension and wheels are still some of the most popular, sought after parts for making other bikes of the era (and older) corner and stop better. If memory serves it was the best-selling sport bike in America for its entire lifecycle.

Weight nearly the same, power was up, braking was better, and so was the handling. Honda claimed the new motor was putting out over 100hp, numbers you needed a liter bike to get just 10 years earlier. These bikes can go nearly 150 mph, and will go from 0-100 in 7.5 seconds. But it is the accessible handling from the modern size wheels and radial tires, adjustable pro-link rear shock and 41mm adjustable fork that really makes these such good bikes. 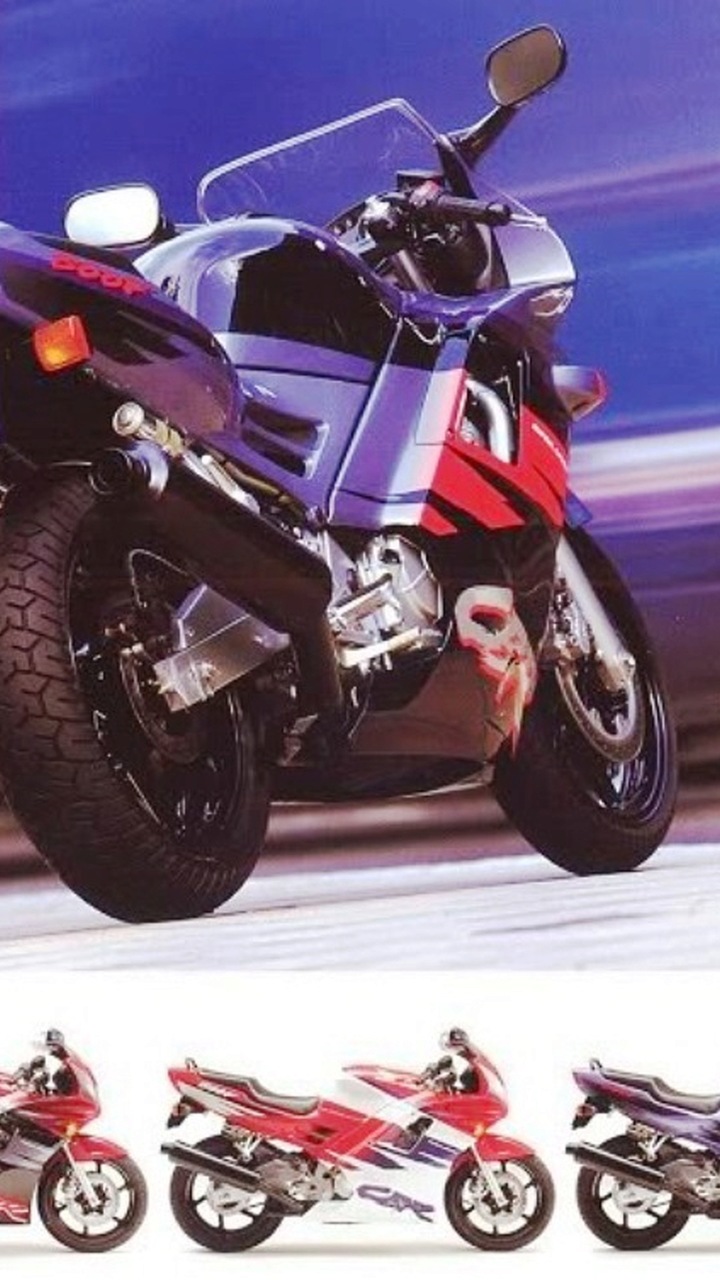 Honda added all that performance without sacrificing the all-day comfort and commuting ability of this do-anything all-arounder. But the added power and handling allowed Honda to once again dominate the 600 SuperSport series with the new bike.

Some of these bikes have been known to have cam chain issues, but unless you find one that has never been ridden hard, ever, this problem would have already shown itself and been fixed. Voltage regulator/rectifiers can also go bad, but that is a quick and easy, plug and play fix. Just try to find one that wasn’t crashed and tweaked as a race bike then put back on the road with shiny new plastic. The last year F2 (1994) does have the best forks and rear shock though. 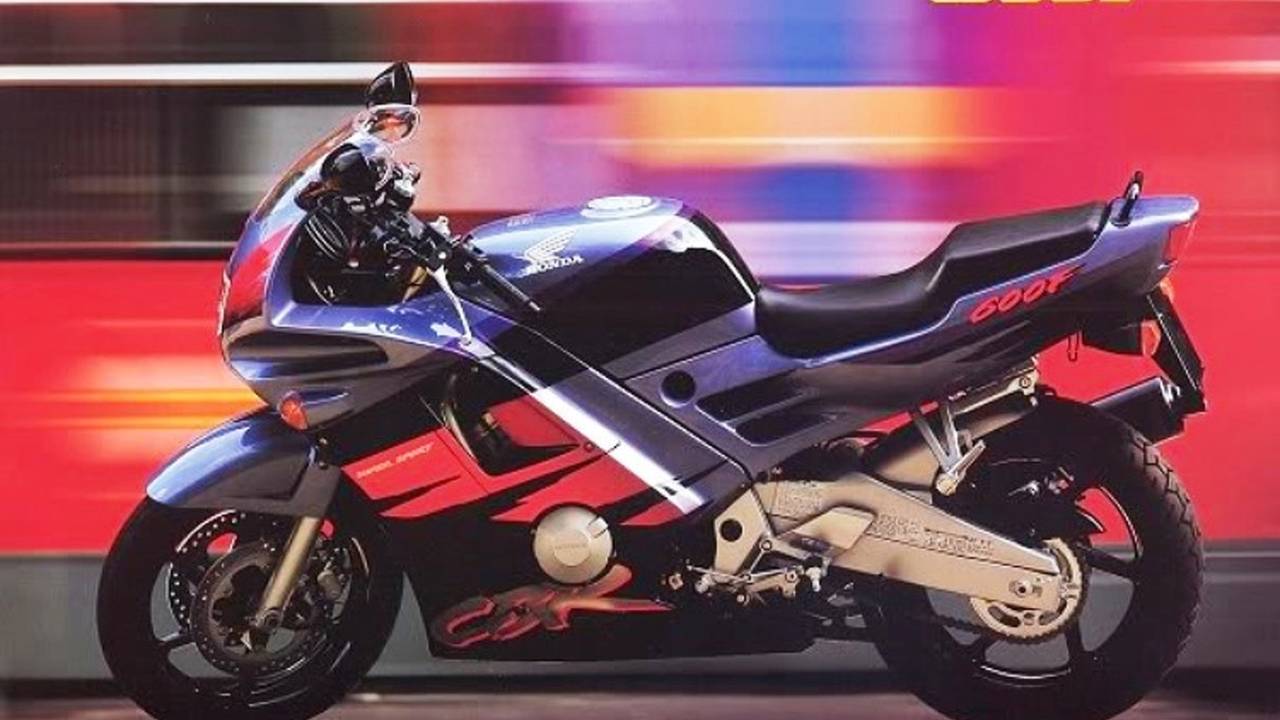 After the revolutions the previous generations had brought, the F2 to F3 was more of an evolution, and fine tuning of the bike. But, Honda being Honda everything was evolved, motor, brakes, suspension, wheels, everything. The gains in power, speed and quickness from the F2 to the F3 are not huge, in fact it’s really not all that easy to tell how much more power it gets, but there is a little more. The brakes rotors are bigger, the rear tire is wider, the forks are more adjustable, and the rear suspension has a different rate linkage and a different shock. 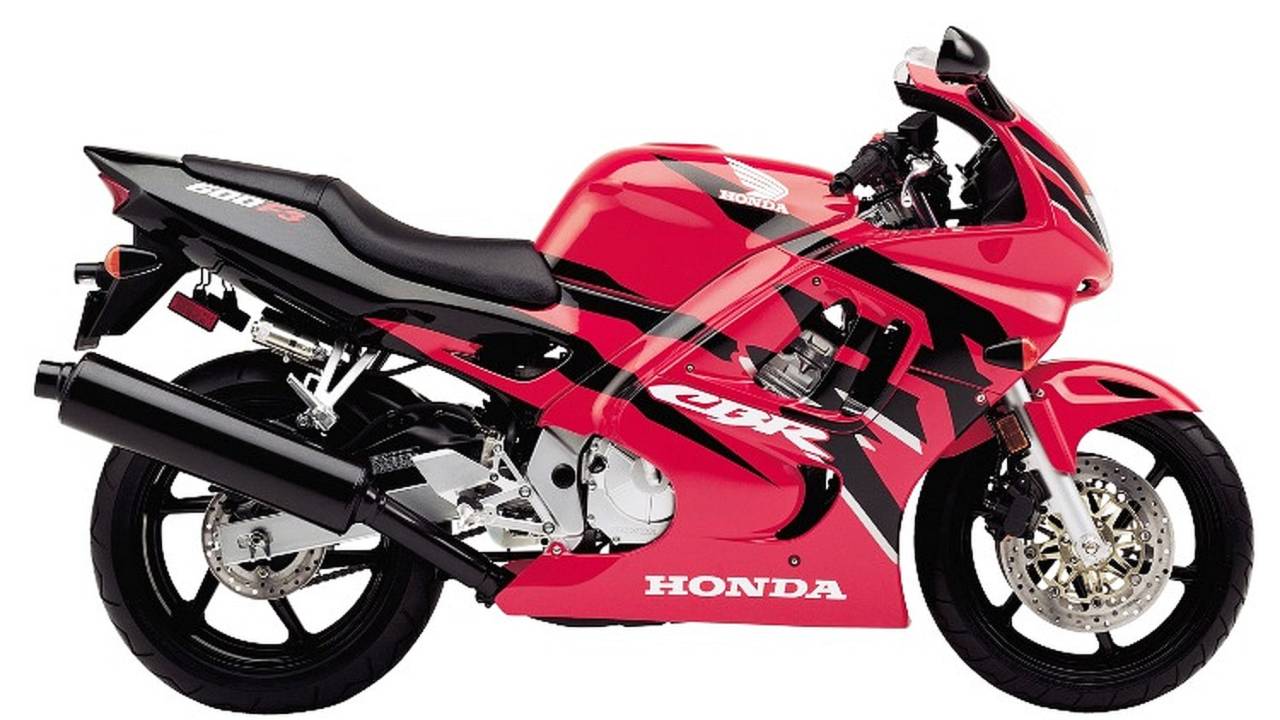 The 600F3 does feature true ram air feeding the air box from under the headlight, for a better top end rush. Also, over the course of the F3 model years the motor was revised twice, meaning the 1998 bike has the most power, than the 97, and then the 95/96, but the difference between them all is less than 10hp. The official number is 105hp at 12,000rpm with claimed dry weight at 406-408lbs. 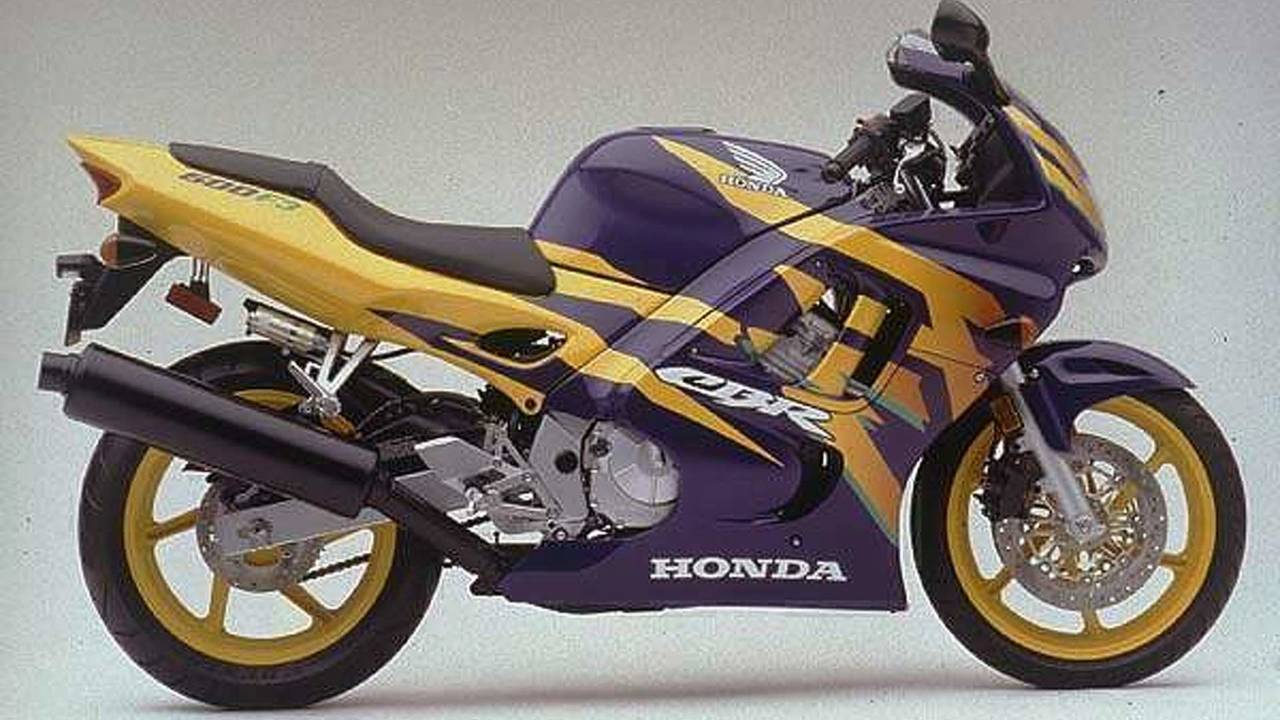 No matter how you feel about tobacco sponsorship of sports, the most collectable of these bikes, and most interesting is the Smokin’ Joe Camel special edition. I couldn’t even find an official picture online, but it is similar to the bike above, but with Camel cigarette logos, and race replica decals on it.

But again, these are all good bikes with no major flaws, so just find a nice one and enjoy. 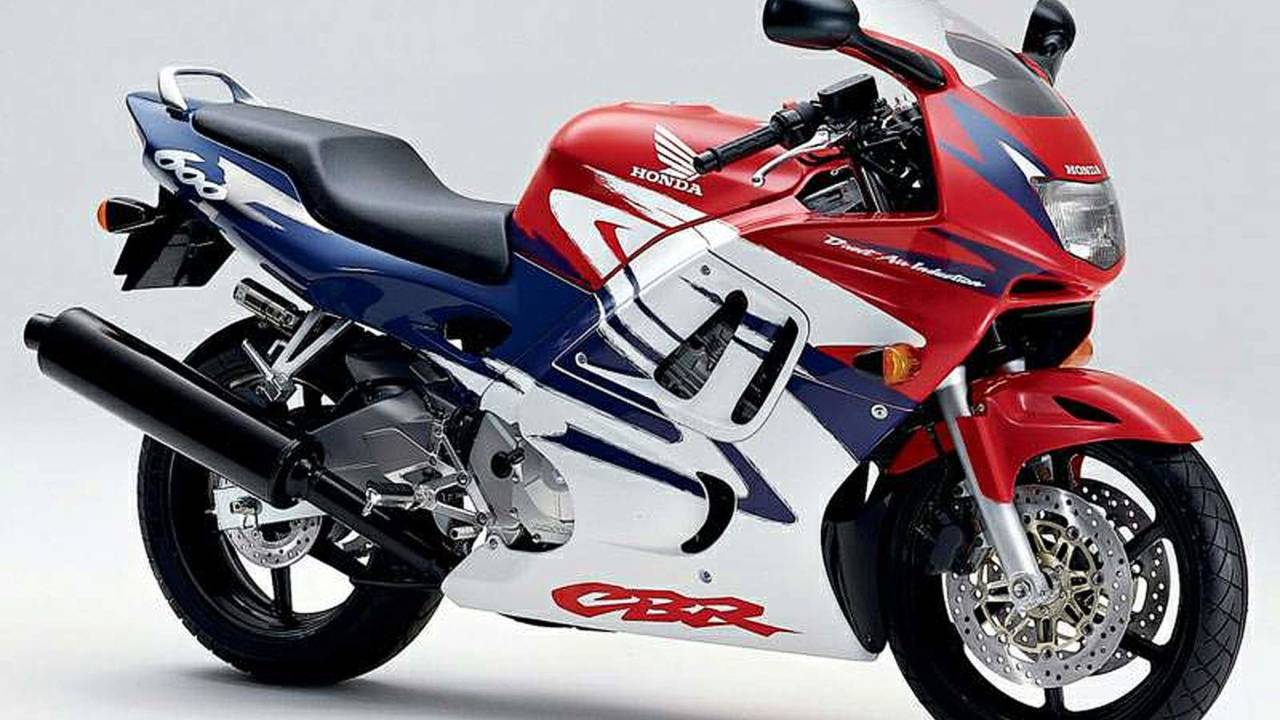 Amazingly enough, nostalgia works in your favor with the F3 because people seem to value the last year F2 more. Average retail price for a used F3 these days is only about $2,500, though one in excellent condition will sell for more than $3,000.

The biggest change for the CBR600F4 was the introduction of an all aluminum frame, and further weight reductions which trimmed 25lbs off the previous bike. The motor was also gone through, and magazines at the time found the Honda to be the most powerful 600 of the bunch. But still Honda persisted in building a bike that was all day comfortable, hence the F and not the RR at the end of its name. 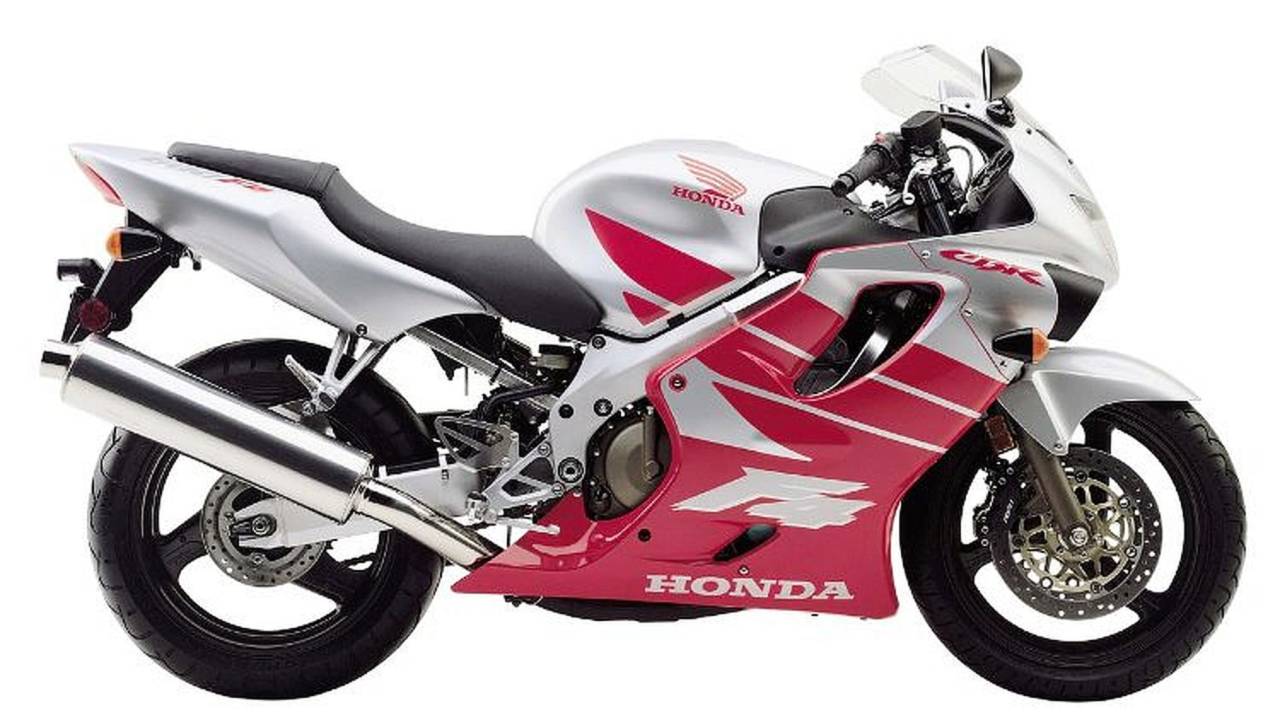 If you are shopping for an affordable used bike that has hit the bottom of its depreciation curve, the F4 is probably there. Again, there are no major, fatal flaws with these bikes. But aluminum frames are much, much less forgiving than steel, so examine it extra closely for signs of any sort of mishap. Steel tends to bend, but aluminum is much more prone to breaking after any sort of impact. The average retail price of an F4 these days is less than $3,000, with some selling for as low as $2,000.

Honda basically just joined the 21st century and added fuel injection. The F4i was such a good all-around middle weight sport bike that is stayed in the lineup for years after the more hardcore CBR600RR came along. The engine was again revised, for lighter weight, better response and of course more power. The redline is now over 14,000rpm, and power is over 110hp, but weight is down about 5lbs, as is drag thanks to new body work. 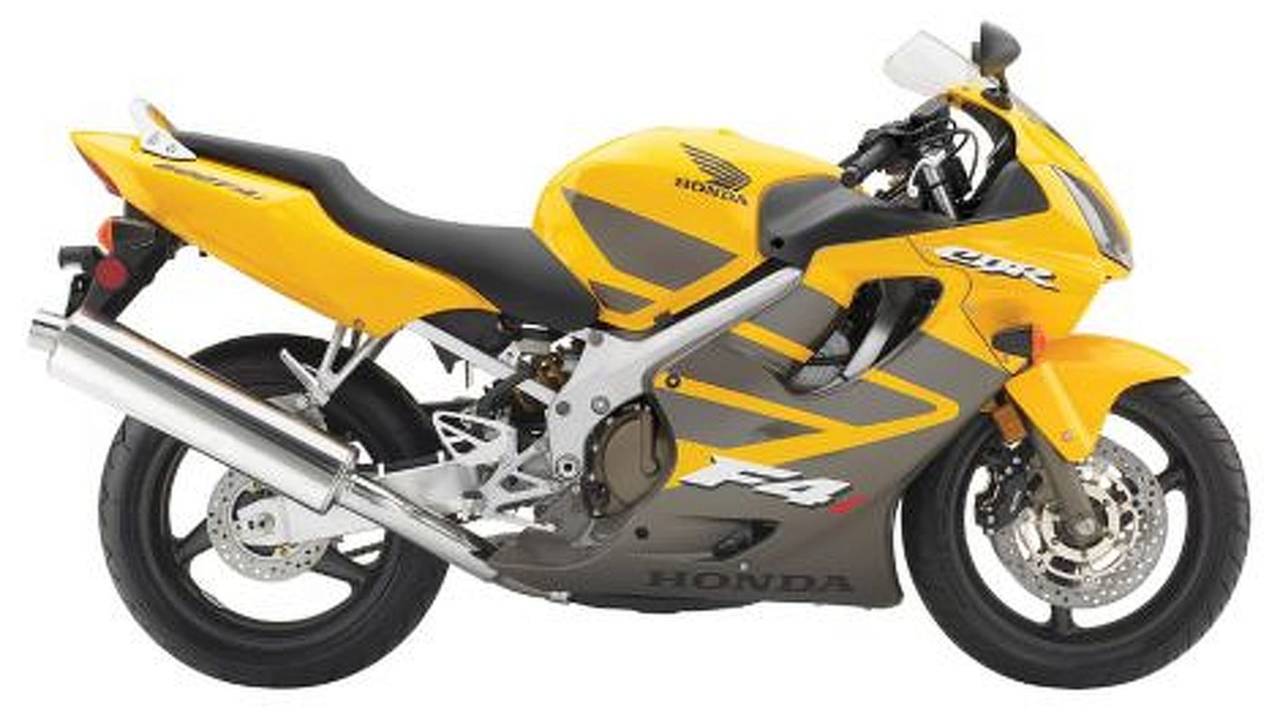 Some people claim the F4 and F4i are some of the best sport bikes you can buy, ever, for all around use. These bikes are fully modern, parts are still plentiful, and they are as reliable as a Honda should be. There really were no major year to year changes on the F4i to speak of, so just go and try to find a clean one. People like modern features like fuel injection, and these bikes are averaging a little more than the carbureted version, but still just more than $3,000, though it is hard to find one for less than about $2,500 in good shape.

This is really where Honda once again goes for a revolutionary new bike. The F series had always been about all day, all week usable sport bike that could still be raced on the weekends. But with the new RR series Honda has focused more on the sport, and less on the comfort and practicality. The CBR600RR is great if you only ride on weekends, or are looking for a track day toy, but seriously you will find yourself riding the older F series bikes more because they are nearly as comfortable as taking the car. 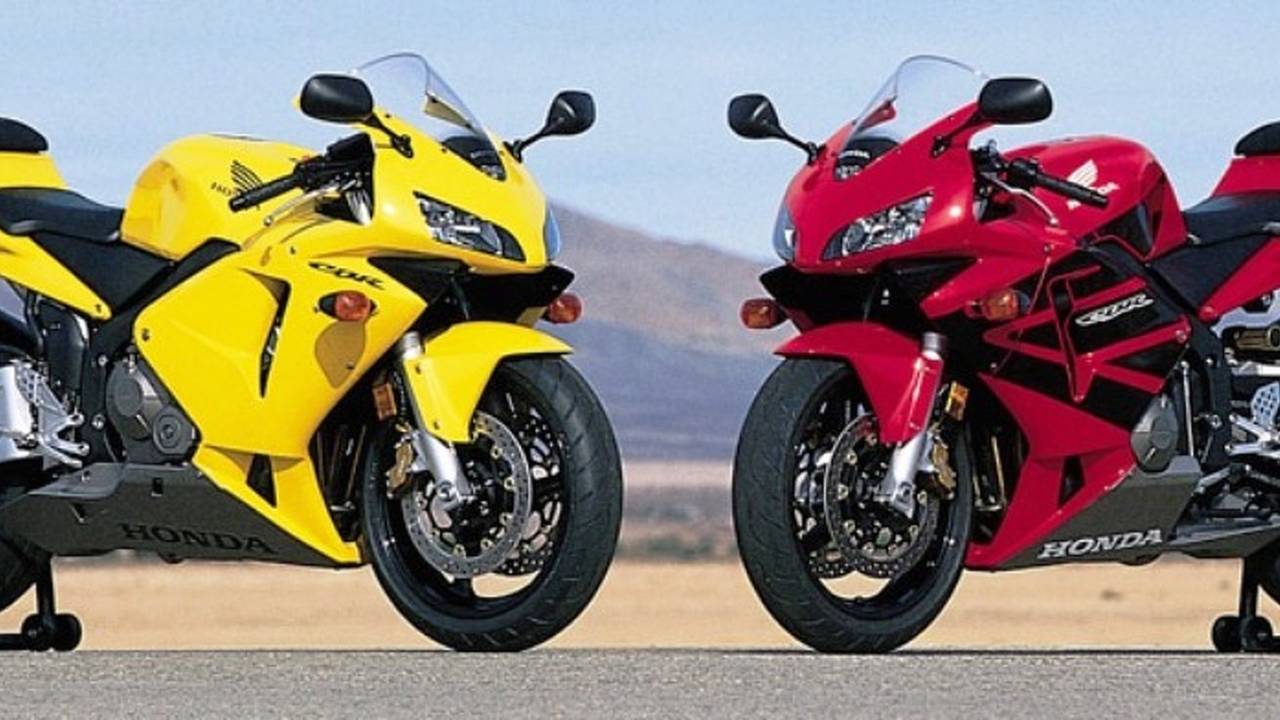