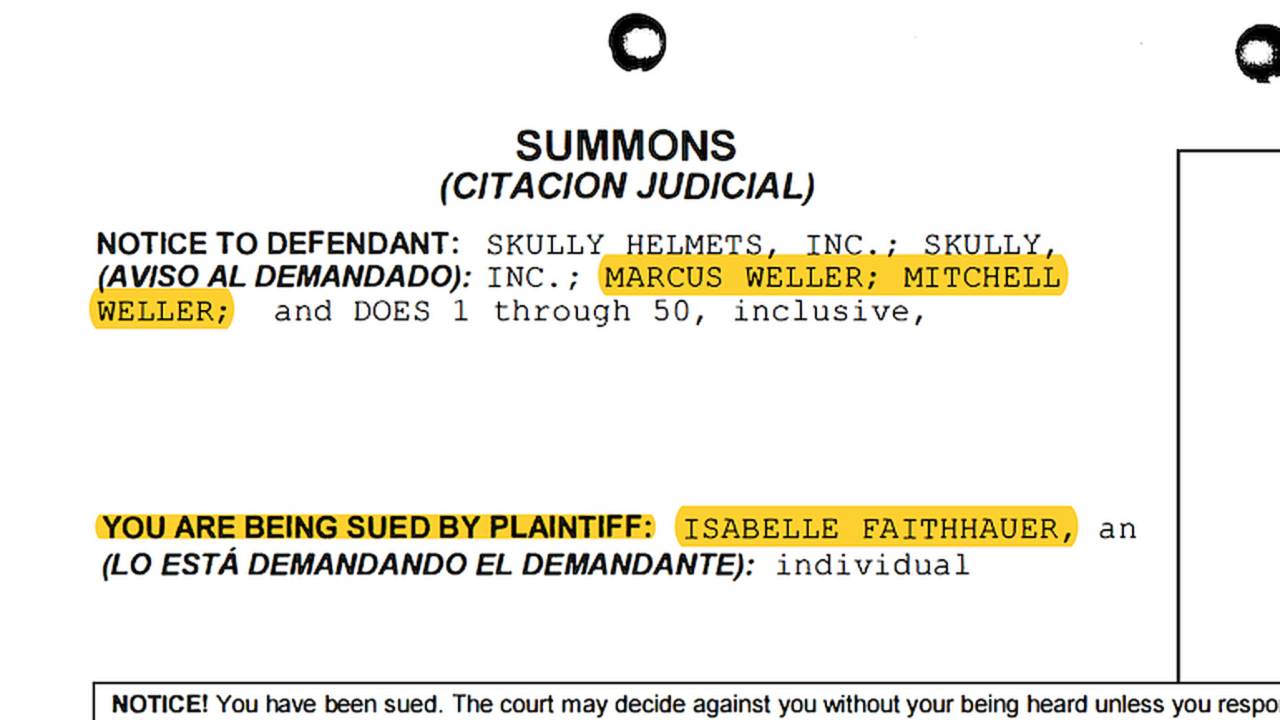 Skully Systems founders Marcus and Mitch Weller are being sued by their former executive assistant and bookkeeper, Isabelle Faithhaur. The lawsuit claims the Wellers used company funds for their personal expenses and extracurricular interests.

The lawsuit is seeking damages for a total of 12 filed complaints, including “Intentional Interference with Prospective Economic Advantage.”

The company first came under fire when they missed their expected delivery date of the AR-1 helmet by more than two years. In mid-July of this year, the Wellers were ousted by Skully investors due to various disagreements about the future of the company.

Shortly after the brother’s departure, there were reports of the company closing its doors for good. At that time it was hearsay, since the website was functioning and listing the helmets as simply “sold out.” The hearsay became official last week, when Skully filed filed for Chapter 7 bankruptcy.

This new lawsuit, filed by a former employee, appears to offer some insight as to why the potentially successful motorcycle helmet company tanked.

Buzzfeed was the first to report that lawsuit, on August 6, with the article providing a copy of the lawsuit that was filed at the Superior Court of California. In this document, it states: “The Wellers intermingled personal funds with corporate funds and used the corporation as a tool to pay their personal expenses. Plaintiff is further informed and believes and thereon alleges that the various corporations were never fully organized or perfected, and they are undercapitalized and/or a mere 'shell.'"

According to the lawsuit, the Weller brothers spent money on a number of personal items including restaurant meals, mobile devices, exotic trips, car rentals, rent for an apartment in San Francisco, four motorcycles as well as insurance for the bikes, two Dodge Vipers (the second allegedly purchased after the first one was wrecked), limos, strippers, and furniture for the apartments in San Francisco. The lawsuit also alleges an $80,000 payout to a former co-founder.

When Skully hired a new bookkeeper around July 2015, Faithhaur reportedly disclosed the Wellers' spending practices. When they found out that she had done this, the lawsuit says, she was demoted to office assistant.

When Skully later hired a vice president of finance, Faithhaur was reportedly pressed to provide more information about the Wellers' spending. As the lawsuit explains:  “Plaintiff was being asked more questions about personal expenses of Marcus Weller and Mitchell Weller, paid for by SKULL Y. The Wellers were notified of the answers that Plaintiff provided to the Vice President, and others, in response to their skeptical inquiries into the bookkeeping entries made by the Wellers.”

Things between Faithhaur and the Wellers soured considerably, according to the lawsuit, reaching a peak late last year when she took off time to take her autistic son to doctor’s appointments: “In November of 2015, plaintiff's son was diagnosed with Autism. Plaintiff began bringing her son to work on Fridays, with approval of Mitchell Weller and Marcus Weller. When Marcus Weller brought his puppy to work one Friday, he told plaintiff to put her 'dog on a leash...' Marcus Weller made other comments about Plaintiff's son being 'sick.' Marcus Weller was unhappy about Plaintiff taking time off to go to doctor appointment for her autistic son.”

Faithhaur's lawsuit says she was terminated upon returning from an approved trip she took the Disneyland in December 2015. The Wellers offered a severance in the form of “hush money,” according to the lawsuit, meaning Faithhaur couldn’t discuss the brothers' questionable spending habits. She reportedly declined the package.

According to the lawsuit, when she found a new job, the Weller brothers called her employer and told them that Faithhaur “was untrustworthy and dishonest."

"They told the new employer that Plaintiff had been terminated for disclosing confidential financial information could not handle confidential information," claims the lawsuit. "She immediately lost her position at her new place of employment."

Before filing for Chapter 7 bankruptcy, Skully was reportedly scrambling to find funding due to running out of cash quickly. This lawsuit definitely paints of picture of poor business management and shady business transactions. If Faithhaur's allegations are proven true, it seems clear that Skully's demise was exacerbated by what the Weller brothers did with money that should have gone to manufacturing the AR-1.

What’s next? Not much for now.

Unfortunately, those who initially invested in an AR-1 helmet on Indiegogo will not be refunded. However, a letter on the Indiegogo web page states that those who invested funds for a Skully helmet will receive a notice from the bankruptcy court in regards to how to file a claim.

RideApart will keep you updated with any developments on this lawsuit, and any others that may pop up sooner rather than later.