Iconic Machine Gets More Power and Higher-Quality Fit and Finish.

Triumph has pulled the cover off a new, more powerful Street Triple range, consisting of three variants targeted at a broad range of skill level and budget.

The new Street Triple S, Street Triple R, and Street Triple RS are all powered by a 765cc inline triple engine based on the Daytona 675 platform, and improve upon a model that has become something of an icon since its original 2007 release. 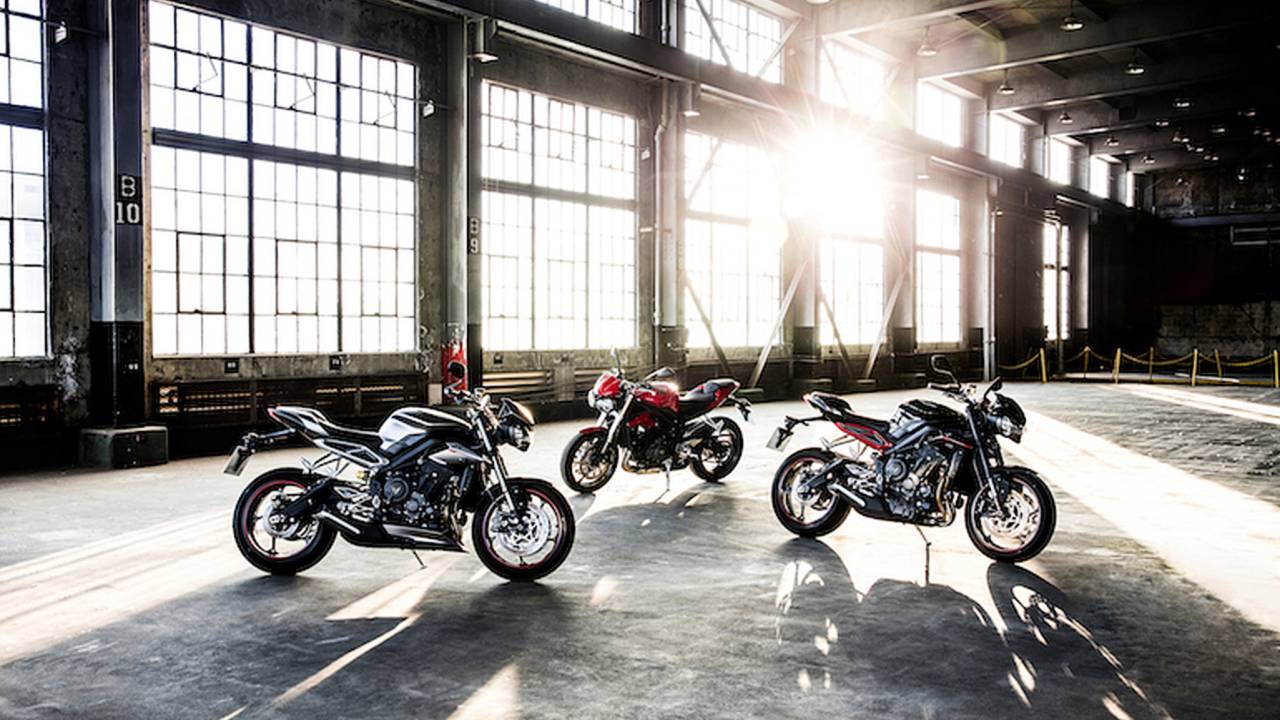 Triumph says the new powerplant features more than 80 new parts including new crank, pistons and Nikasil plated aluminium barrels and an increased bore and stroke. The result, it says, is a significant advance in performance, particularly low-down and in the mid-range. Each of the new models come with a different engine set-up, ECU and tune, with the S model being targeted at newish and everyday riders, and the all-bells-and-whistles RS being pitched to road riders who also like to take their bikes to the track. 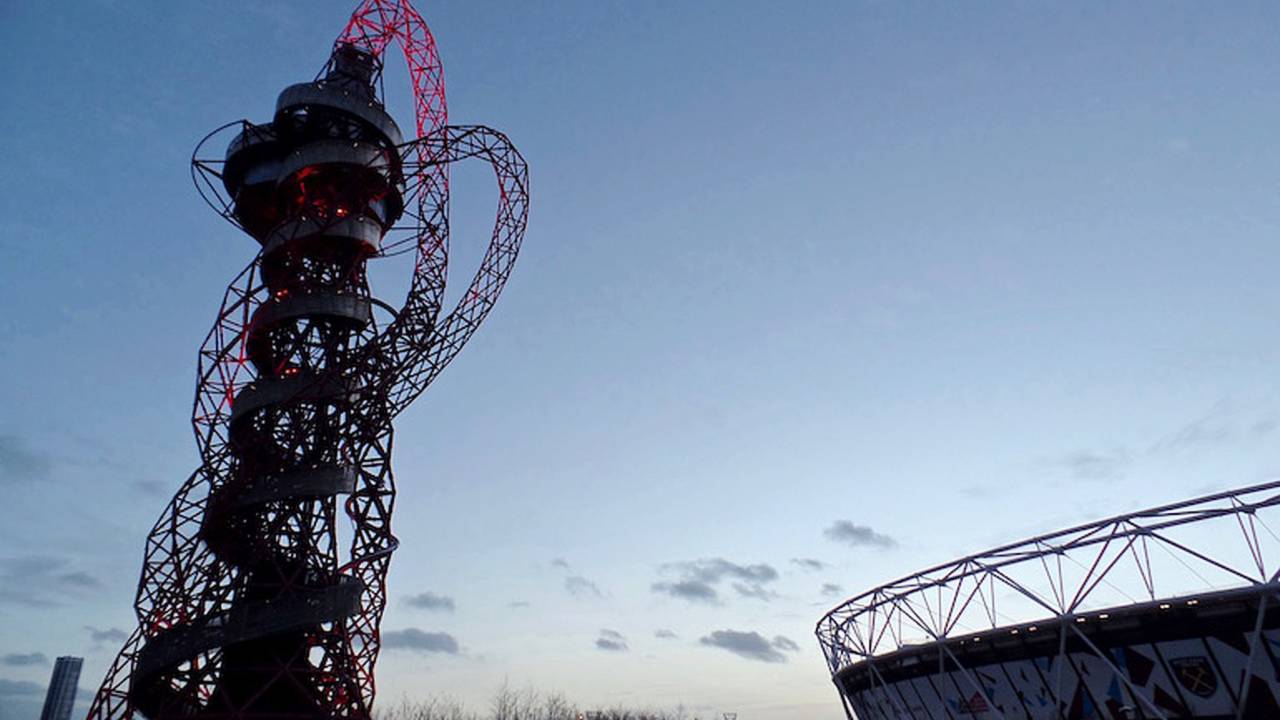 The Triumph Street Triple event was held at the top of this tower. The tower has a slide, which I went on several times.

Triumph chose to unveil its new pride and joy in London’s Queen Elizabeth Olympic Park, home to the 2012 Summer Olympic Games, which seemed an appropriate setting for a company that has been going from strength to strength as of late. While other motorcycle companies are struggling, or flat out closing their doors, Triumph’s sales have been increasing around the globe. Clearly it’s hoping the new Street Triple range will play a role in its continued success.

All the new models will have riding modes, with the top-spec RS having the most to choose from. Triumph says all models will have better brakes, tires and suspensions than previous incarnations. And despite having more engine and more tech, the bikes will weigh a little bit less (2kg, or 4.4lbs). Triumph says all the new bikes will feature a “richer soundtrack,” thanks to a lighter exhaust that delivers ”an intoxicating and more distinctive induction howl.”

Having seen and heard the Street Triple RS in action (journos were treated to a tire-smoking display by two stunt riders) I can confirm that the new bike does sound meaner. Triumph also says gear changes will be slicker than before on all models. 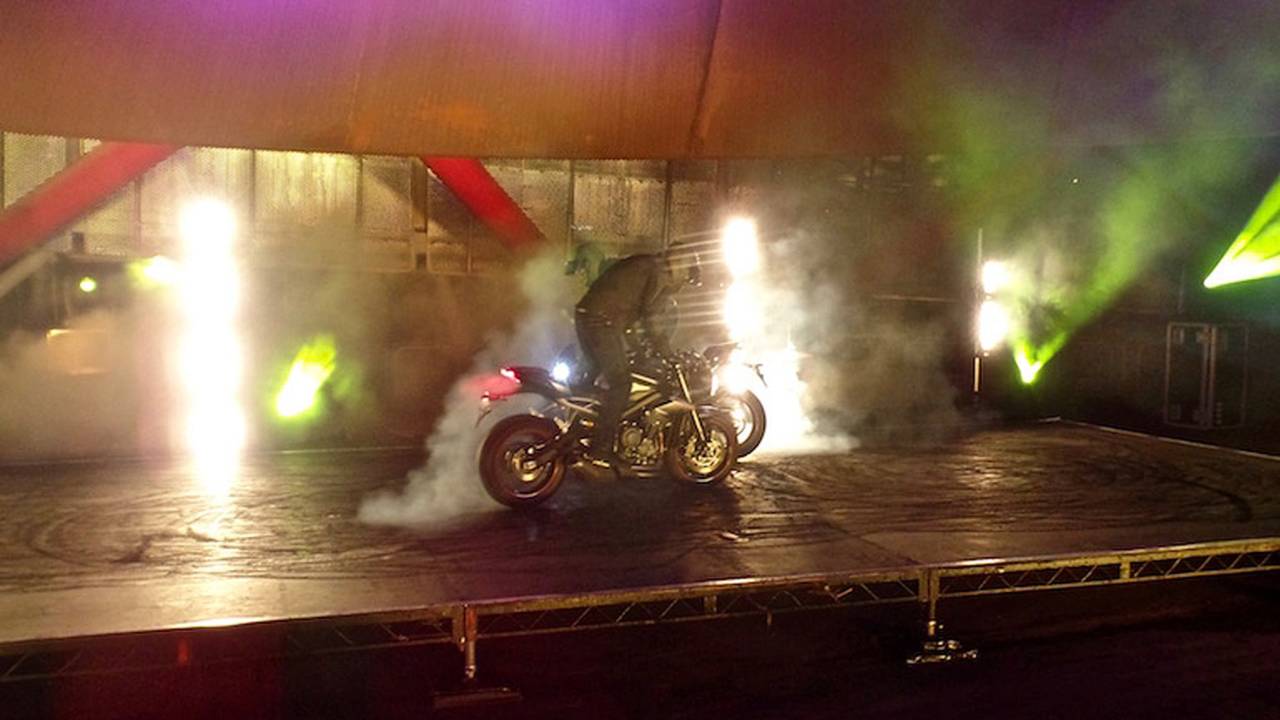 Additionally, all models have been given a new gullwing rear swingarm, which Triumph says offers “increased longitudinal torsional stiffness, combined with an engineered reduction in

lateral stiffness.” The result of those fancy words, Triumph says, is increased stability at the higher speeds.

Triumph has also restyled the bikes somewhat, to my aesthetically lazy eye the most obvious change is in the tail end, which looks like the abdomen of a wasp. Triumph says: “More contemporary and aggressive lines have been created with all new bodywork, flyscreen,

radiator, cowls and new integrated air intake. In addition, the seat has been redesigned and restyled to deliver a sharper, sportier separate twin seat set-up without sacrificing rider or passenger comfort.” 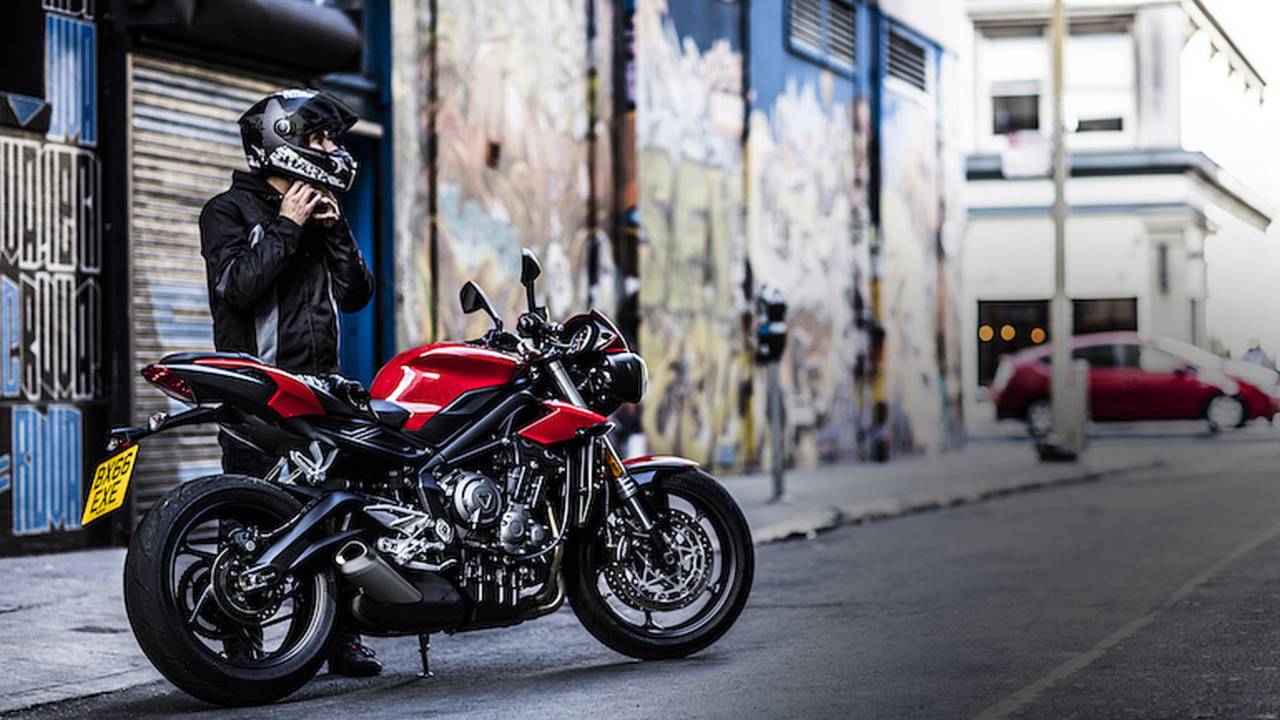 The S model will be the most affordable and least bling of the three new Street Triples. Triumph sees it as an everyday bike that can be used to slice through traffic and have fun on weekends. The S boasts a 6.6-percent boost in power over the previous base model, which means 113 hp at 11,250 rpm.

The bike will come with two riding modes – Road and Rain – and traction control can be turned off, for those eager to save money on tires by only riding on one wheel. 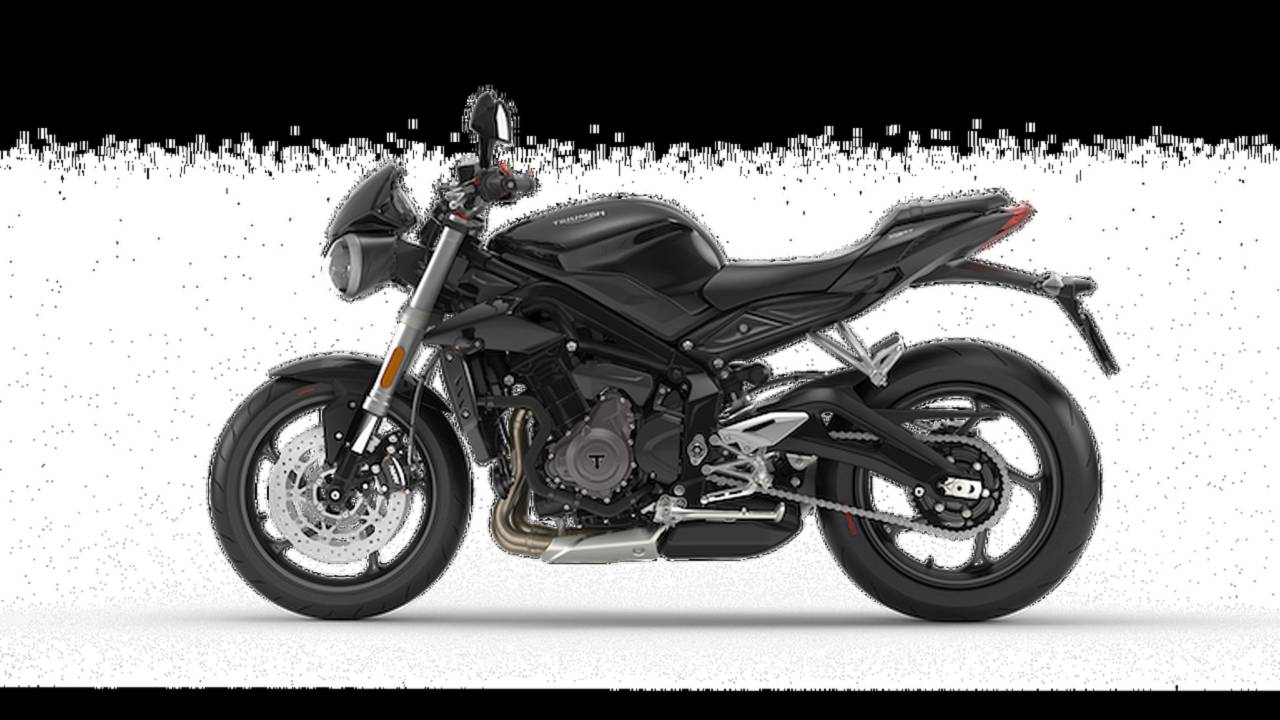 The S takes its instrumentation from the latest generation Speed Triple, which allows the rider to select the riding modes – on the move or at a standstill – and access key information from the on-board computer. The LCD dash offers a speedometer, rev counter, riding mode symbol, gear position display, fuel gauge, odometer, trip meter, and journey distance. 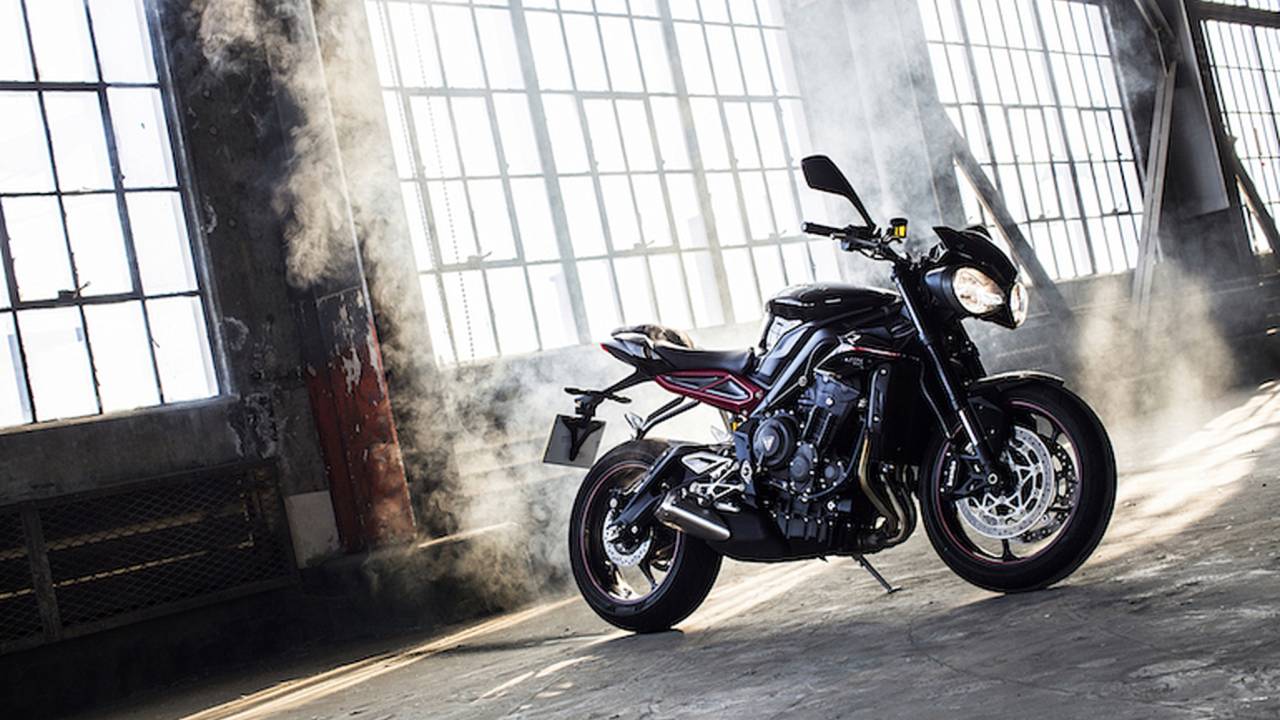 “We see this as being the new definitive street fighter,” says Triumph Head of Brand Management Miles Perkins when speaking of the Street Triple R.

In terms of spec and techno whizzbangery, the R is a big leap from the S, notably featuring a why-hasn’t-anyone-else-done-this-already dash display that can be adjusted to the rider’s tastes. Want the tachometer over there? Or up here? You can have that at the touch of a button. There are three different screen display styles to choose from, pre-set to the riding modes and changeable on the move. Each of the three styles can be selected with ‘High’ or ’Auto’ contrast. 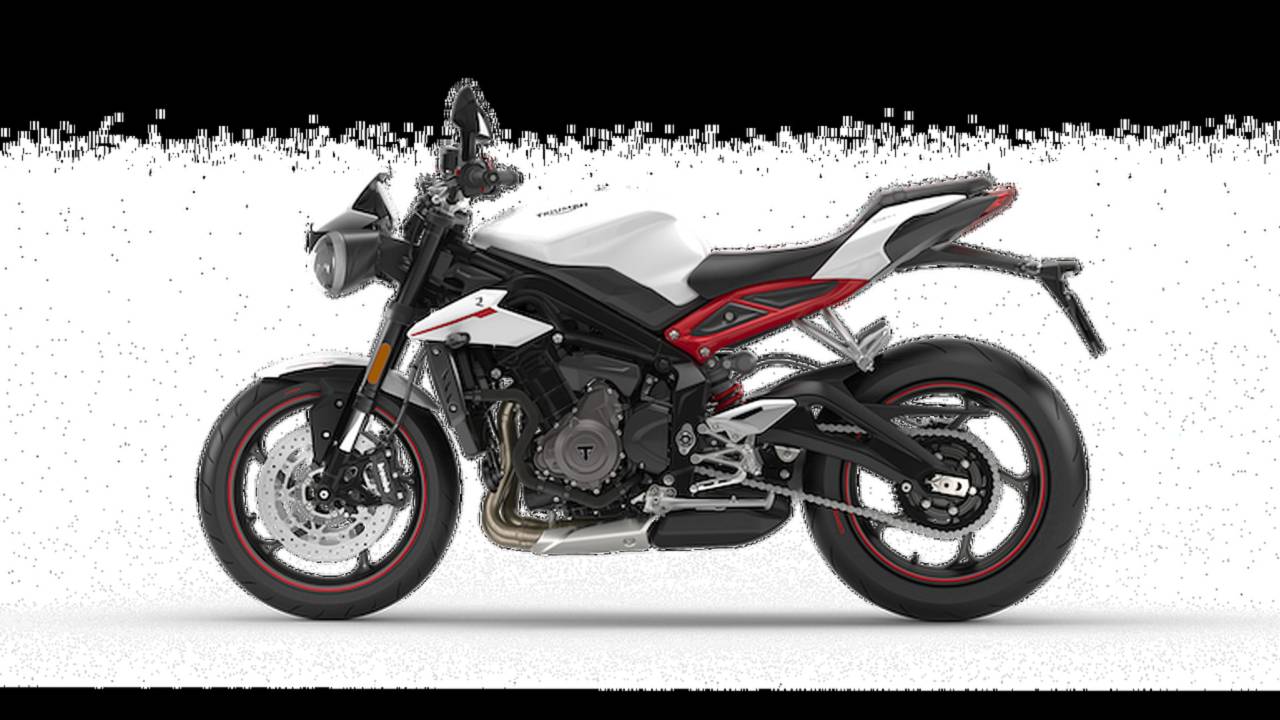 In addition to the information available for S riders, the R’s dash also offers two trip displays, average and instantaneous fuel consumption, range to empty, display style and contrast settings, service information, coolant temperature, and warning symbol information. To navigate this maze of information, the Street Triple R and RS have all-new “switch cubes” with a 5-way joystick control that Triumph describes as “intuitive” but which I suspect will perplex the heck out of me.

The R has four ride modes: Road, Rain, Sport and Rider Programmable. Meanwhile, the R gets a 11.3-percent boost in power over the previous model, pushing peak horsepower to 118 ponies at 12,000 rpm. The R and RS models both come with a new slip and assist clutch. 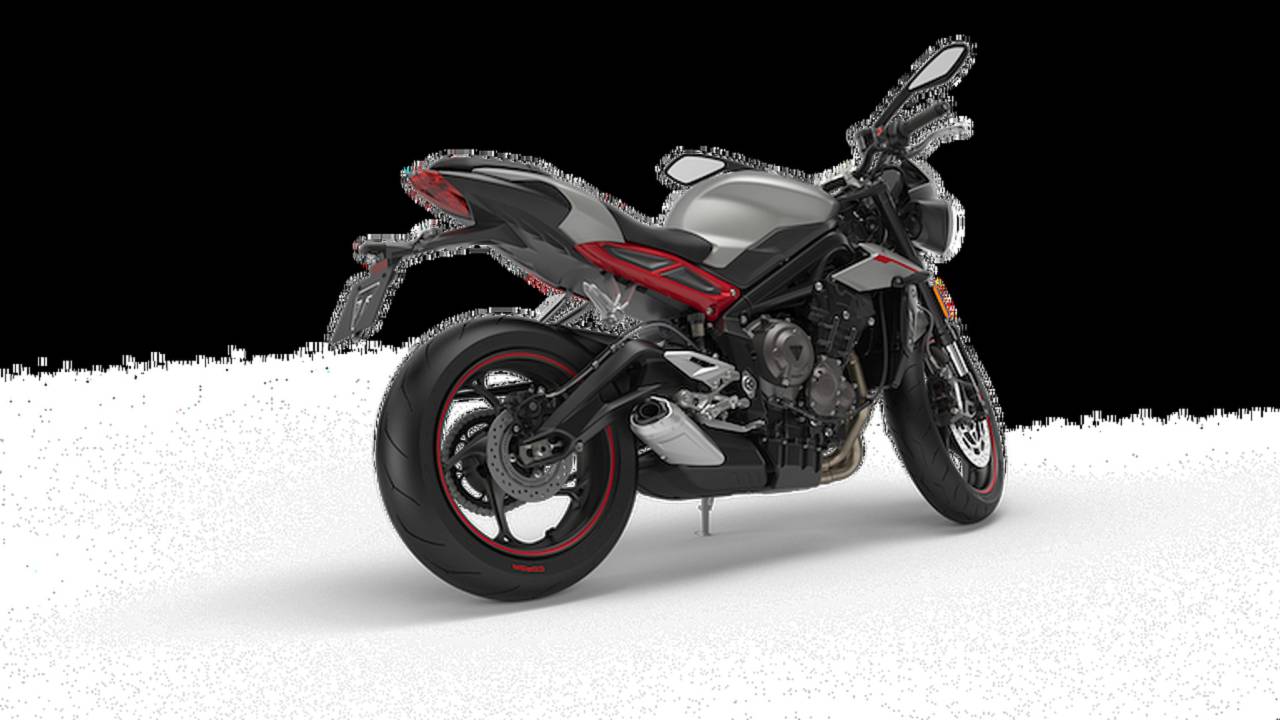 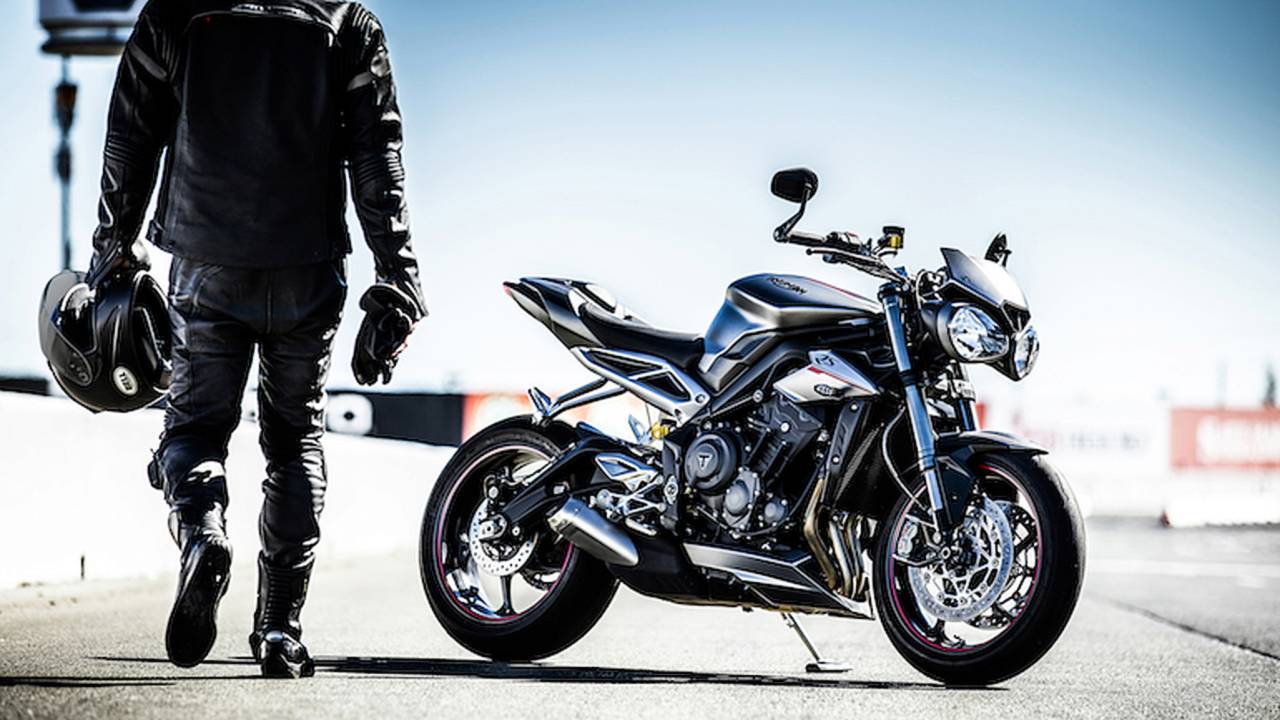 Needless to say, the RS is the top of the line. I’ll admit I’m still not a fan of the Street Triple’s headlights, but with its design changes and high level of fit and finish, I found myself muttering an, “Ooooh, that’s a sexy thing,” when first laying eyes upon the RS.

Triumph says the RS is “built to be at home on the track, and a weapon on the road.” Power is increased 16 percent over the previous model, delivering 123 hp at 11,700 rpm. Like the R, the RS is equipped with a slip and assist clutch, but also is also fitted with a quickshifter, which Triumph says allows for clutchless upshifts that are up to 2.5 times quicker than a skilled rider using a standard clutch upshift. 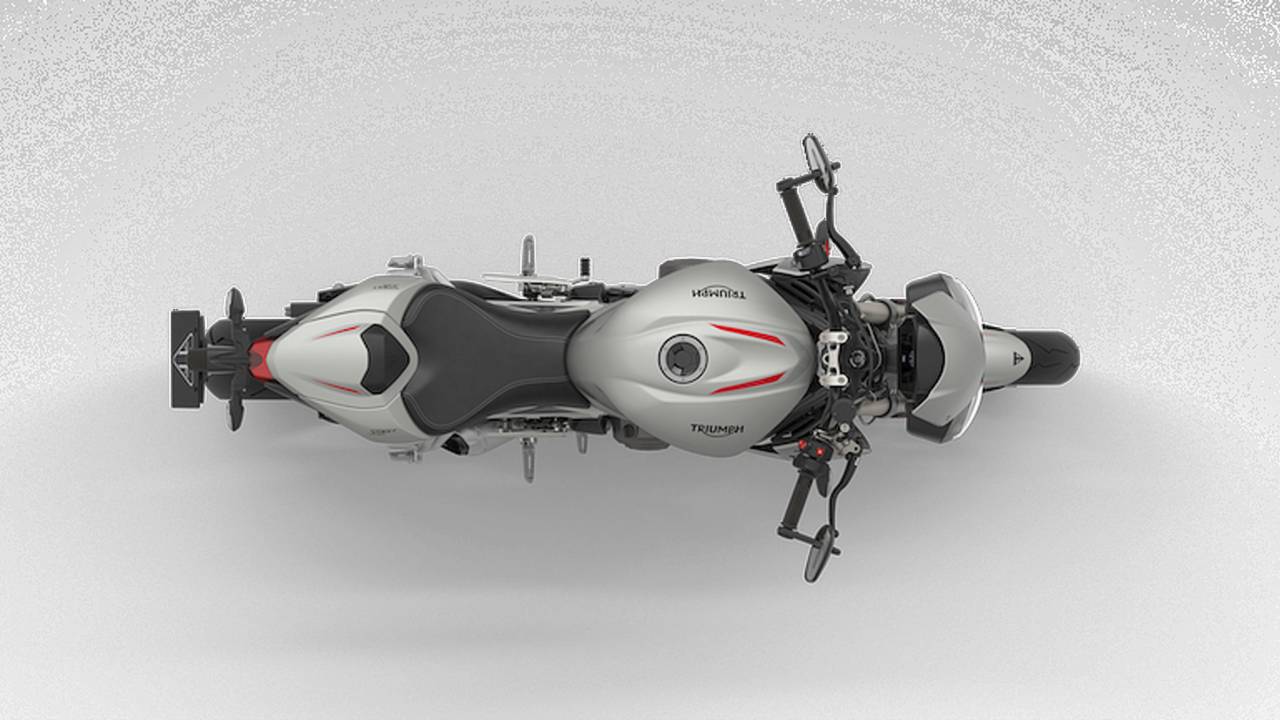 The RS gets different shoes than the S and R models, wearing Pirelli Diablo Supercorsa SP tires, which Triumph says “deliver advanced sporting performance for road and the occasional track use.” 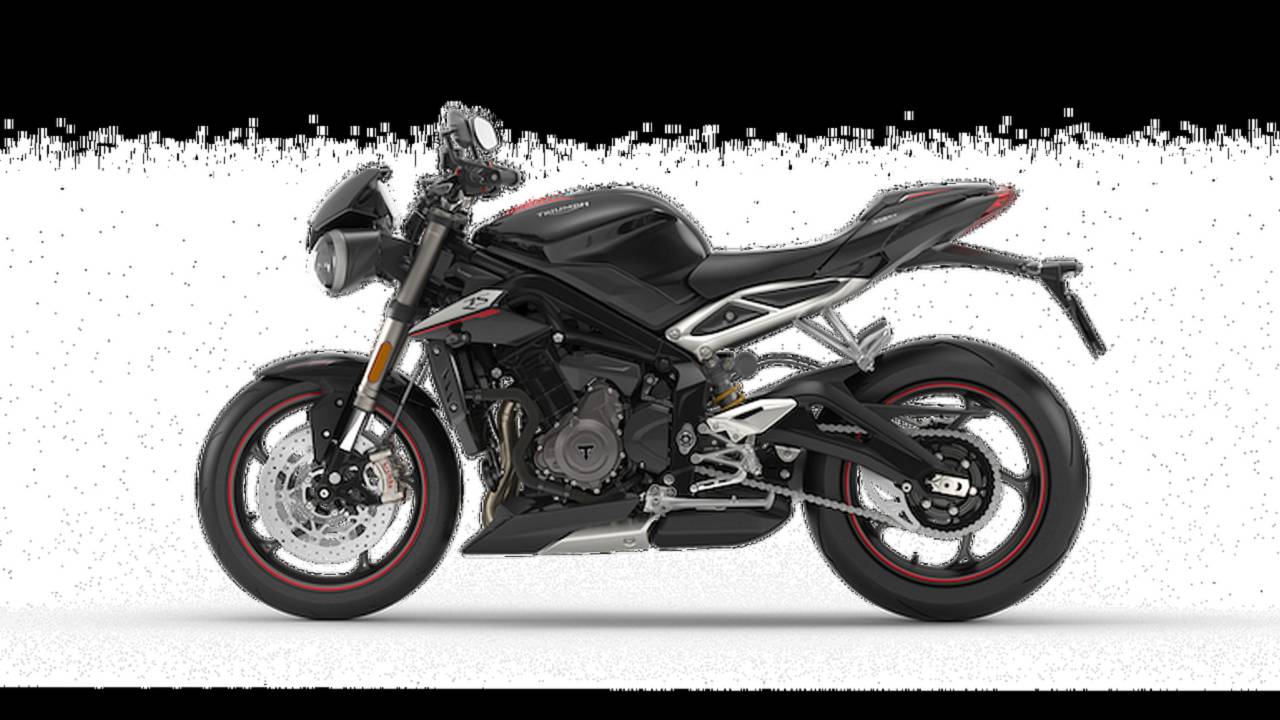 The RS has the same nifty display as the R, plus a little bit more. RS owners get an additional set of three more screen display styles, a lap timer in the display, and a fifth riding mode. Along with Road, Rain, Road, Rain, Sport, and Rider Programmable there’s also Track.

The Street Triple RS will be available in Matt Silver Ice or Phantom Black (Metallic).

All three bikes will be hitting dealerships in waves in the spring, with the RS models arriving in March, the R models in April, and the S models finally arriving in May. 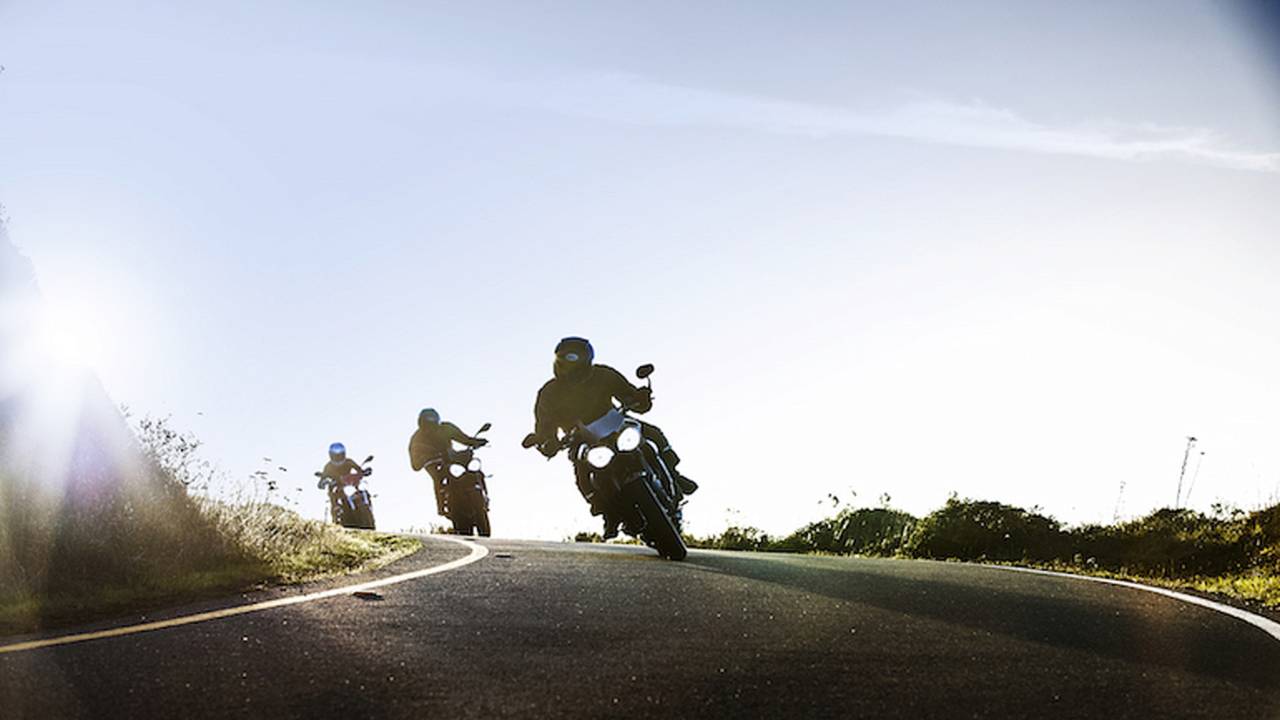 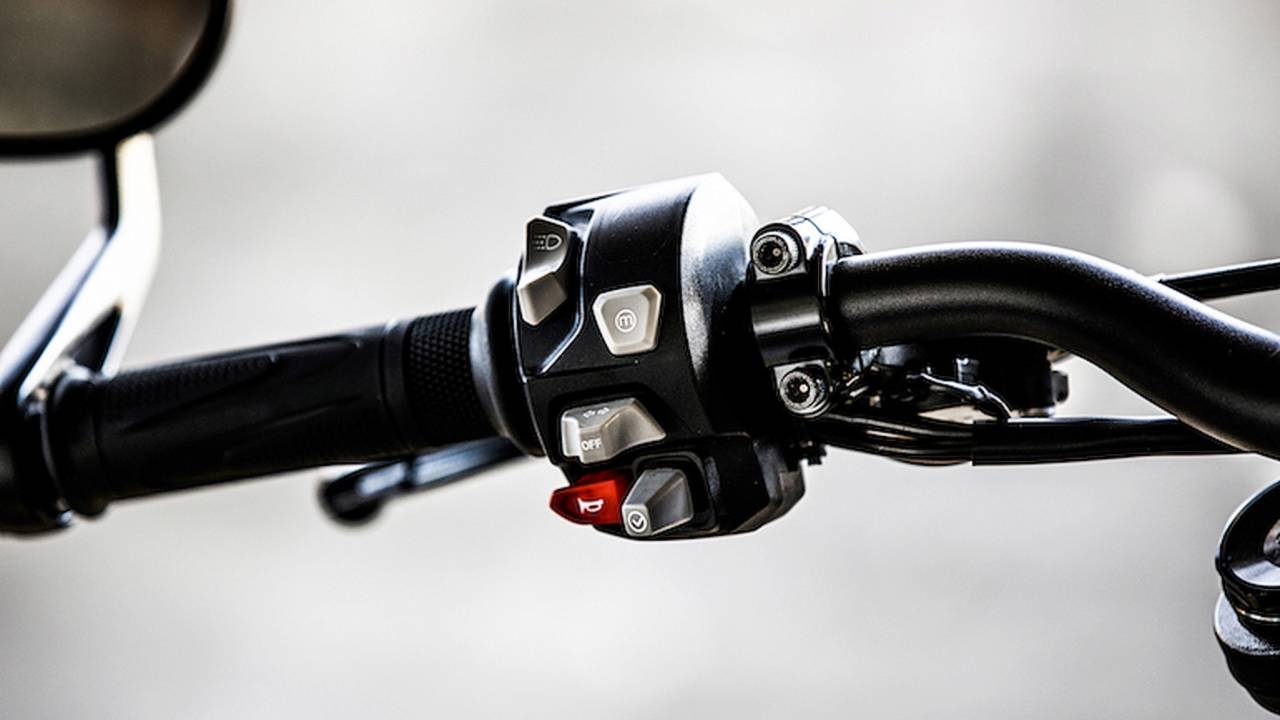 The left-side "switch cube" and joystick looks a little challenging. 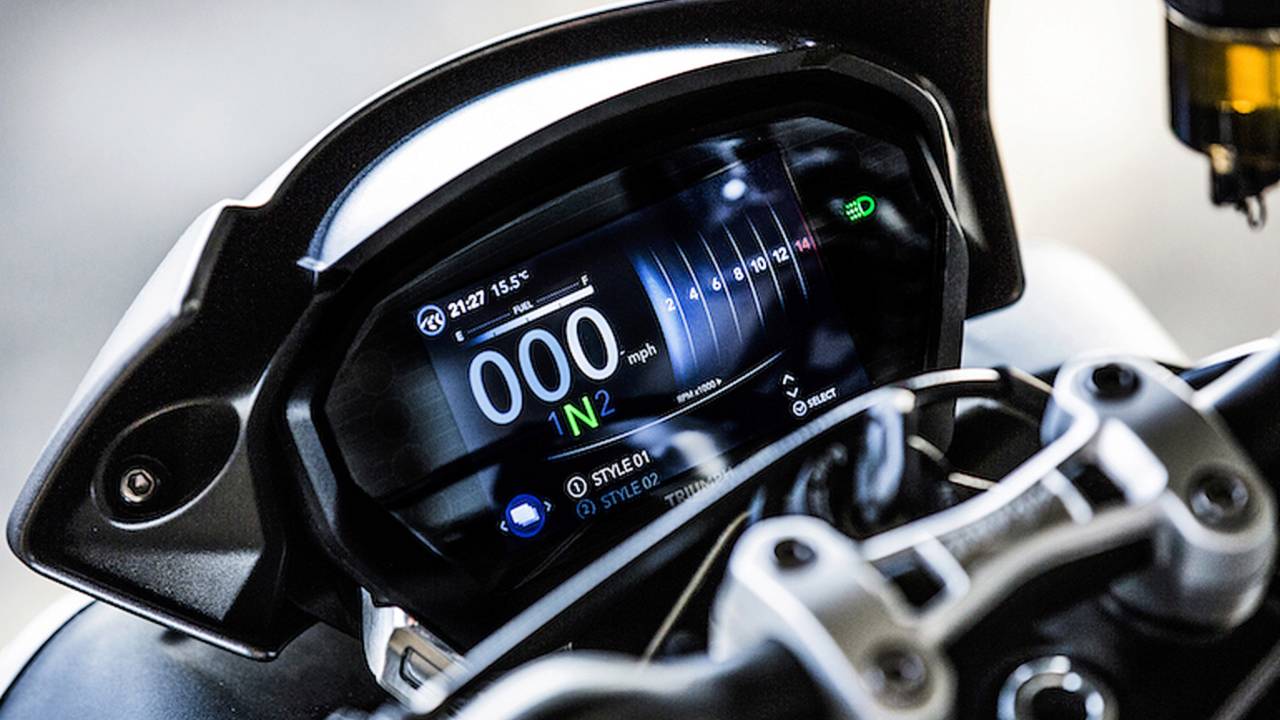