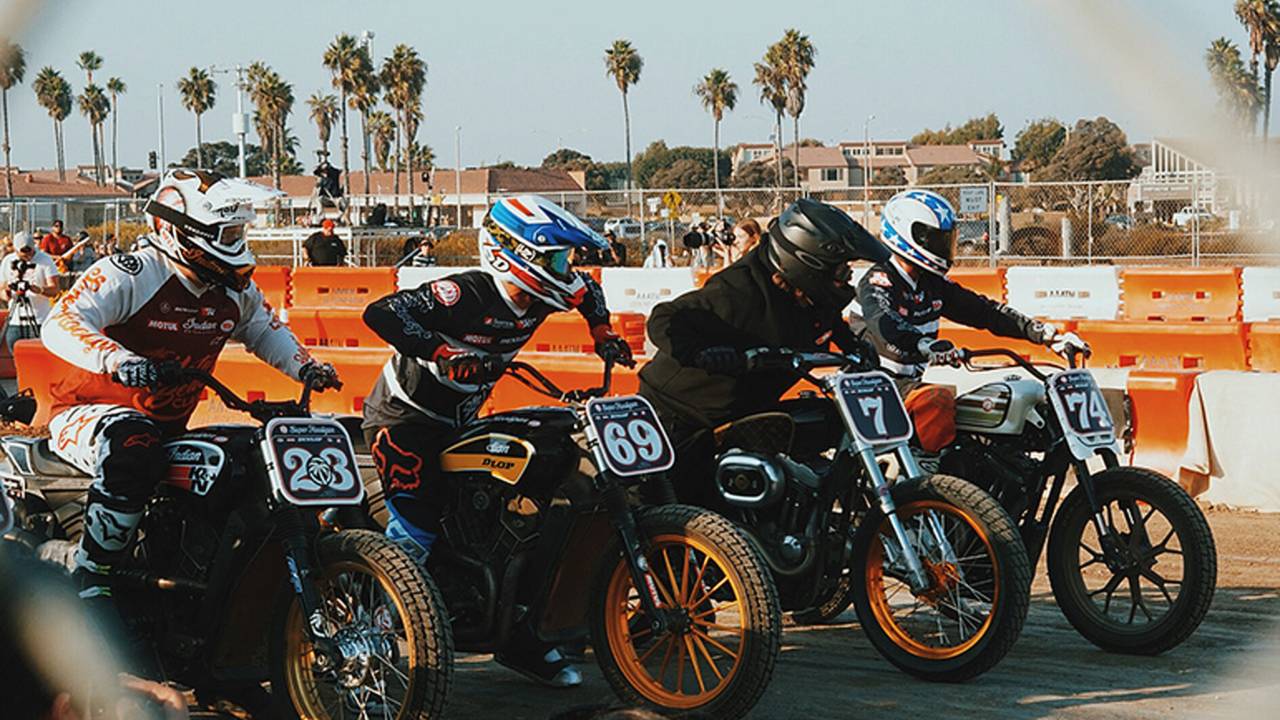 RSD kicks off their 2018 Super Hooligan Championship Tour being billed the “The Greatest Show on Dirt” at The One Moto show in Portland, OR.

Roland Sands has kicked off their 2018 Super Hooligan Championship Tour being billed the “The Greatest Show on Dirt” at The One Moto show in Portland, Oregon

The spirit of Super Hooligan racing originated from “run what you brung” according to Roland Sands Design, being able to race and ride home on any bike you owned. Today, the rules are loose but strictly limit the bikes to above 750 cc twins in stock frames with dirt flat track tires (or 17-inch rain racing tires) and no front brakes.

We try: Getting Dirty at Indian's Super Hooligan Series

This is the second year RSD, a motorcycle product and apparel company turned event organizer, has turned Super Hooligan racing into an official series. This year’s series includes 11 venues but the cumulative score from 9 of the 11 runs will be taken, in the case that you can’t make it out to the summer X Games in Minneapolis or Sturgis in South Dakota, but if you already missed The One Moto show you would have to make it to at least one of those far off places.

Other places to catch the series will be the popular Hippy Killer Hoedown and Dirt Quake and the whole thing will end at the Moto Beach Classic in Bolsa Chica for the second year. Moto Beach Classic was an odd event last year with the racers competing on a pretty flimsy amount of gravel-y dirt that had been poured onto a paved parking lot. It will be interesting to see if they make it less sketchy this year, but they may not try because they have advertised that one of the events as an “asphalt oval”…

Last year’s winner of the Championship ended up taking third at Bolsa Chica but the most points overall and took home a customized RSD Indian Motorcycle with this year’s winner vying for the same. Along with other prizes from sponsors like Dunlop, Bell Helmets, K&N Engineering and Law Tigers, there is a bit of prize incentive for the winners, but this is no career race. Aside from the main race event there will be a pre-race Dash for Cash where 1K will be up for grabs as well as a $300 holeshot award presented by K&N. All this being mentioned, the highlight of the official rules is that in the event of a “B Main Event” it is mentioned that no prize will be awarded, but the winner will take home the “Fastest Slow Guy” bragging rights.

The races are open to any manufacturer as long as the bike fits the specs mentioned above but it will likely be heavy turnout of Harleys and Indians as is common in the Super Hooligan world. Last year I was surprised to see a Ducati Scrambler out racing with the gnarly crew of Harleys.

In the press release they refer to the event as “a party where a race broke out” and in the spirit of Hooligan Racing these events definitely promise to be a party at least for the spectators. It’s always fun to watch flat track racing, especially seeing the heavy bikes sliding around the track like maniacs. There will be lots of places to catch “The Greatest Show on Dirt” this race season and you’ve already missed the first!

Build your own: Indian FTR1200, Hooligan-ized