Not your grandpa’s set of wheels.

When people think of cruiser motorcycles, images of Easy Rider, leather chaps, and the Hells Angels usually come to mind. Many folks associate cruisers with the heyday of motorcycling, but the cruiser’s heyday is far behind us at this point. Though the segment has lost popularity in the past decade, manufacturers continue to push cruisers forward with modern engineering and innovative designs.

Unlike the days of yore, today’s cruisers come in many shapes and forms. From engine configurations to ergonomics to rake and trail, modern cruisers feature a diverse range of specifications that meet specialized needs. Whether you’re embarking on a cross-country trip or tearing up the local twisties, you can do it on a cruiser. With that versatility in mind, here are five of the best cruisers on the market today.

Harley-Davidson has epitomized the cruiser segment for over a century, so we couldn’t start our list with any other make. Yes, the Bar and Shield certainly shaped the cruiser culture as a lifestyle brand, but they’re making strides to enter new markets. However, appealing to new customers doesn’t mean that Harley is abandoning current Harlistas and the Softail Low Rider S proves that.

After the Motor Company discontinued the Dyna Low Rider S—and the Dyna line overall—Harley faithful vehemently called for its resurrection. With an 8-valve, 114ci (1,868cc) v-twin engine, inverted forks, and an aggressive (for Harley) 28-degree rake, the Softail version of the Low Rider S simultaneous appeased those calling for the Dyna’s return and those looking for a nimbler hog.

Of course, the fit & finish on the Low Rider S is second to none and exemplifies what Harley does best—styling. The blacked-out aesthetic and bronze accents capture the old, brash cruiser attitude mixed with modern touches like a headlight cowl and t-style handlebars. No, this isn’t your grandpappy’s cruiser, but it sure isn’t the most radical example in the segment...

Just a glance at the Ducati Diavel and you can tell it’s a different kind of cruiser. Whether it’s the trellis frame, the futuristic headlight or the sportbike-spec components, the Diavel screams performance cruiser. While the Diavel’s aesthetics bucks conventional cruiser styling, it hasn’t stopped the model from racking up design awards in the past two years.

Packing a 1,262cc v-twin that achieves 159 horsepower with 95 ft-lb of torque, Ducati’s brings the muscle with its lone cruiser. The Ohlins suspension, Brembo brakes, and bi-directional quickshifter also compliment performance-oriented engine and chassis. Along with all that power, the Diavel’s traction control, Bosch cornering ABS, and wheelie control helps mere mortals wrangle the beast.

Since its debut in 2011, the Diavel has been pushing the cruiser market forward. With advanced technology, superior engineering, and visionary design, Ducati has carved out a cruiser niche of its own—and other manufacturers want a piece.

Unlike Ducati and Harley, Triumph relies on inline-triples to power its flagship cruiser—the Rocket 3. This particular inline-triple is longitudinally mounted and boasts a jaw-dropping 2,500cc-capacity. It’s no surprise that the Rocket 3’s car-size engine pumps out 165 horsepower and 163 ft-lb of torque. What is surprising is that the model shed 88 pounds in the process of gaining more muscle.

Many presume that Triumph re-imagined the Rocket 3 for the 2020 model year to compete with the Ducati Diavel. If the fully-adjustable Showa suspension, Brembo Stylema calipers, and re-designed chassis are any hints, the presumptions might not be far off. In addition to the traction control, cornering ABS, and ride modes, the new Rocket 3 luxuriates riders with cruise control, hill-hold, and a Bluetooth-enable TFT display.

Offered in touring (GT) and sporty (R) variants, customers can choose their particular flavor of cruiser without leaving Triumph’s showroom floor. With the massive overhaul of the Rocket 3 platform, we look forward to continued competition in the category—but we can’t help looking back at the model that started performance cruisers overall.

Introduced in 1985, Yamaha’s VMAX has been the performance alternative within cruiser circles for 35 years. The V4 engine, shaft drive, and futuristic styling consistently positioned the VMAX as the anti-Harley option for cruiser buyers. In 2009, Yamaha re-branded the model as the VMAX and plopped a 1,679cc, 16-valve, double-overhead-cam engine into its re-designed frame.

Unlike the Diavel and Rocket 3, the VMAX isn’t equipped with the latest gadgetry and technology. It doesn’t feature tire pressure monitoring systems, turn-by-turn navigation, or heated grips. The VMAX’s “technology” consists of a 5-speed transmission with slipper clutch, wave-style brake discs with ABS, and fully-adjustable suspension.

If you’re not one for all the bells and whistles, Yamaha’s VMAX may be the performance cruiser for you. While the model hasn’t seen a major update in over 10 years, it still fills a much-needed spot in the cruiser landscape and cranks out a face-melting 170 horsepower. Whether it’s the unconventional design or power that pulls you in, you won’t find another cruiser like Yamaha’s VMAX.

We return to the US for the finale of our cruiser round up, and there’s no better way to end it than with the Indian Chief Dark Horse. Since Polaris acquired the Indian name in 2011, they’ve offered a more modern-leaning cruiser than the other American manufacturer (ehem, Harley). With a Thunderstroke 111 engine at its core, the Dark Horse separates itself from the crowd.

The 111ci (1,818cc) v-twin engine found in the Dark Horse lays down a blistering 119 ft-lb of torque at just 3,000 rpms. Pairing the Thunderstroke motor with floorboards, swept-back handlebars, and an air-adjusted monoshock makes this cruiser a mean mile-muncher.

The Chief’s design is modern take on classic Indian cues, like the headdress light on the sweeper front fender and heritage Indian logo on the teardrop gas tank. The Dark Horse proves that you can have performance without sacrificing comfort and that cruiser market is more diverse than ever.

The Best Things Come In Fives: 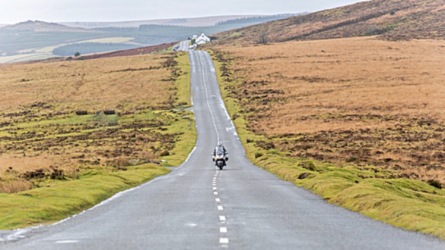 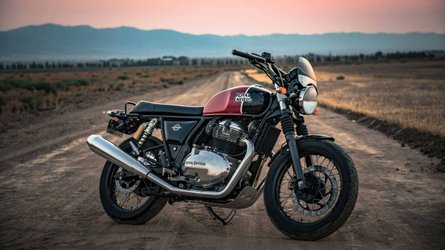