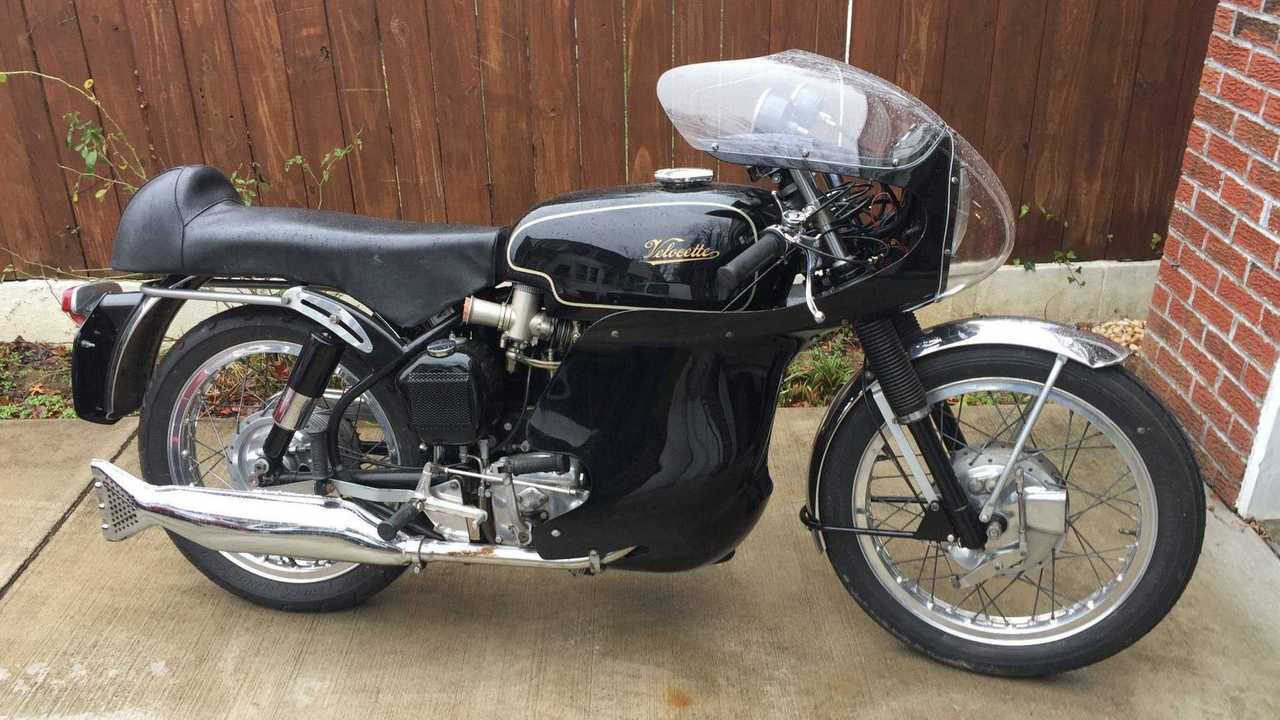 Too fast and light for this world.

Remember when motorcycle shows thrown by local vintage clubs were a thing? It’s the tail-end of August, 2020, as I’m writing this, so it probably seems like longer ago than that actually was. Anyway, go to enough of those types of shows, and you’re bound to see an occasional Velocette. Now, I’ve seen bikes in person that are technically rarer in terms of the actual numbers ever produced—such as the Britten V1000—but there’s this strange sort of hush that seems to follow the name “Velocette” when it’s spoken aloud.

If you’re at all like me, and you see something as visually striking as the 1967 Velocette Thruxton you’re looking at right now, you naturally want to know more. This bike may just be one of the finest, most desirable models that Velocette produced during its lifetime, which ran from 1905 to 1971. Incidentally, it didn’t only look good—it also went well enough that Velocette swept to a one-two finish in the 1967 IOMTT Production 500cc class. It’s all the more poignant that the company had just four years to live—but at least it left an indelible mark on motorcycling history before it receded to the realms of hazy memory and occasional collectors’ auctions.

Founder Johannes Gütgemann moved from Germany to England, adopting the name “John Taylor” somewhere along the way. In 1905, he and business partner William Gue made their first motorcycle together and called it “Veloce,” while initially naming their company “Taylor Gue Ltd.” That same year, Taylor founded a separate company called “Veloce Limited” to sell related products and services. Taylor would later change his name once more, to the more direct Anglicization of his name, “John Goodman.”

By 1907, Goodman’s two sons started tinkering around with making a Veloce Motor Car—but it didn’t pan out. They formed a separate company for that venture, however—and that company supplied motorcycle engines to Veloce Limited in later years. On paper, it may have been two different businesses building bikes—but it was still very much a family affair.

In 1909, Veloce put out its first 276cc four-stroke motorcycle, which produced an entire 0.5 horsepower. It didn’t sell terribly well, so the company brought out a 499cc side-valve model that was a bit more powerful, but also simpler. As it gained traction, Veloce went where the public told it to go. In 1912, that meant putting out a “ladies model.” For those unfamiliar (as I was), bikes designated as “ladies models” were offered by a bunch of OEMs during this period. They featured chain guards and other methods of keeping machinery from spattering your clothes, as well as lighter, more compact designs and step-through frames to accommodate the fashions of the day. Sidecars soon followed in 1914, as well.

By 1920, Velocettes—a name chosen to denote their comparatively light weight—were doing things like winning three gold medals at the Six Days’ Trial. At this point, Velocettes were also exclusively two-strokes—and this is where the Velocette name truly began to shine, so much so that while the company was still called Veloce, its bikes would all be Velocettes from 1926 on. That year is also when IOMTT rider Alec Bennett won the Junior TT by a whopping TEN MINUTES astride his trusty Velocette. Racing may not mean as much to bike sales or reputations in 2020 as it did almost 100 years ago, but back then, it meant a whole lot. The company would continue competing in and winning internationally recognized races, including the IOMTT and ISDT. By 1961, a Velocette Venom set a 500cc world 24-hour record of 100.05 miles per hour.

Reams have been written about the particulars of Velocette clutches over the years, which is beyond the scope of this piece. However, if you’re interested in details, you can find some great info on clutches from 1930 to 1969 here, as written by David Childs.

Despite years of building upon its racing successes with production models, Veloce had the great misfortune to make two significant missteps in the early 1960s when it could least afford them. First was the Viceroy scooter, introduced in 1961—and an instant bomb. It was big, difficult to handle, and the fickle public’s attentions were already moving away from the simple charms of scooters. Second was the fiberglass-bodied Vogue—a Velocette LE (little engine) variant, which wasn’t as widely panned as the Viceroy, but which still underperformed. The LEs were a known quantity by that point—simple, straightforward personal transport vehicles developed directly after WWII, when Britain needed them most. British police forces of the time used LEs as fleet bikes.

Back to this 1967 Thruxton. The model was introduced in 1965, and was a more powerful version of their previous top-of-the-line model, the Venom. Enthusiasts loved these machines, and still love them to this day—but despite their race successes and overwhelming desirability, it proved to be a case of “too little, too late.” There’s a strange little footnote toward the end of the company’s existence where motorcycle publishing legend Floyd Clymer swept in and had Italjet make some single-cylinder 500cc Velocette bikes that he slapped Indian Motorcycle badges on. Only 100 to 150 of those ill-fated machines were ever made, and the project died in 1970, along with Clymer himself.

The 1967 Velocette Thruxton you see before you was purchased by the seller in 2015 from a friend’s estate, and comes with service records from 2018 forward, alongside a clean Maryland title. It has 8,000 miles on the clock, although total actual mileage is unknown. It comes with a full race fairing, clear headlight cover and windscreen, bump seat, clip-on handlebars, and rearset foot controls. There is unfortunately no running video, but the seller says they’ve done a magneto overhaul, changed all fluids, replaced fork springs, hoses, and engine gaskets, as well as repainted the lower fairing. It’s up for auction over at Bring A Trailer, and is currently located in Silver Spring, Maryland. Current bid is up to $14,000, and the auction ends on September 1, 2020.