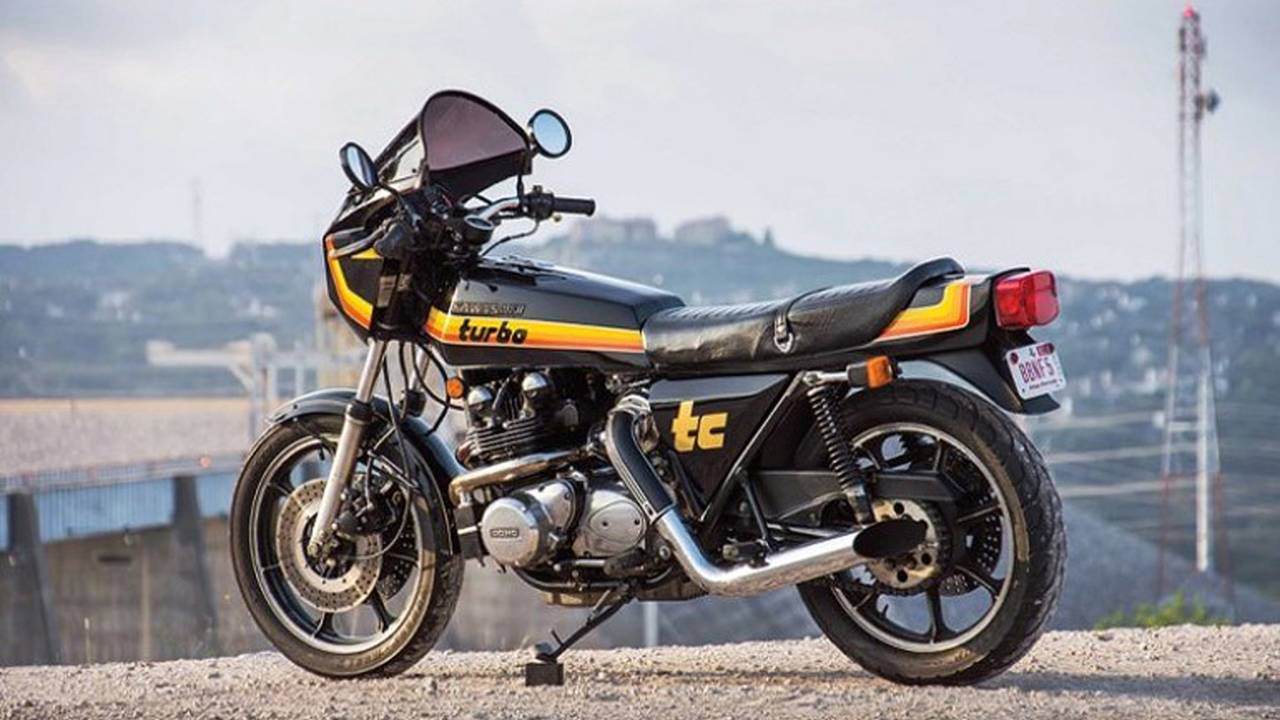 With the release of the Kawasaki H2 and H2R motorcycles, lets look back at some of the other big bad open class bikes Kawasaki has made over the years.

With the release of the Kawasaki H2 and H2R still blowing everyone's minds, lets look back at some of the other big bad open class bikes Kawasaki has made over the years.

Back in the 60s, Kawasaki was making a big name for themselves with high powered two-stroke triples, and that name was unfortunately “the widowmaker.” One of the fastest bikes your saved up lunch money could buy in 1968 was the Kawasaki H1 500cc two-stroke triple.

Even when Honda introduced the revolutionary CB750 four-cylinder in 1969, the H1 was still the quickest—at over 100lbs lighter with nearly the same power. So why the evil reputation? Because it didn’t handle or stop anywhere near as well as it went. The power also came on all of a sudden, even more so if it was tuned.

Team green had a solution though: more power! The 750cc H2 version came out in 1972. Of course, 70s motorcycle fashion didn’t help much in the handling and stopping department.

But Kawasaki knew the writing was on the wall for two-strokes and had been working on their own 750cc 4 cylinder, code named “New York Steak,” before Honda had revealed the CB750. The engineers took a good long look at the Honda and went back to the drawing board, vowing to outdo Honda with a better everything. They came back with a 903cc, dual overhead cam, air-cooled inline that was so well engineered, versions of it are still used for drag racing today.

At almost 550lbs ready to ride and full of gas, these bikes are no lightweights, but they featured over 80hp and plenty of torque everywhere. Unlike their two-stroke siblings, these bikes all came with a disc brake from the factory, and the option of a second as close as the parts department.

That big heavy four-stroke motor also helped keep the front wheel on the ground, which was a real boon to handling and stopping. Don’t be misled though, the front wheel would easily point at the North Star if you wanted it to. Tire, shock, and brake technology still weren’t up to the amount of go power, but engineers were burning the midnight oil trying to get there.

Today, these bikes sell for more than you would think. Yes, early Honda CB750s are gaining in price, but a nice Kawasaki Z1 from 1973-74 goes for more. The NADA price guide lists excellent condition 1973 examples as being worth nearly $10k, while good condition bikes from either year go for nearly $2,500.

In 1975, the Z1 got some updates which actually make it a better bike to ride and live with, and it got even more tractable in 1976 (read: less powerful), but these year bikes sell for much less than their nearly identical older brethren. NADA says excellent 1975-76 examples are worth just $3,400, and good ones little more than $1000. This includes the KZ900 LTD factory custom bike too, which was hugely popular with everyone—except the people at Harley Davidson.

The LTD version features cast aluminum “mag” wheels, a scooped out seat, a smaller rear wheel, and more chrome and custom touches. People who care about these things draw a direct line from this bike to the Honda Shadows, Kawasaki Vulcans, and the rest of the modern Japanese cruiser set.

These bikes are very similar to the 900cc bikes, but with an extra-large bore and over 1000cc. The engine cases were improved and strengthened, but still featured the round cam covers of the original Z1. Power was up slightly for 1977, and for ‘78 some models made an even 90hp. Of course, brakes and handling had improved by leaps and bounds over the early 70s models as well, and these bikes even got a disc brake on the back too.

The best of the bunch was the factory café racer KZ1000 Z1-R, which had larger carburetors, a 4-1 exhaust, a smaller diameter front wheel, and a bikini fairing for better high speed riding. This was the Kawasaki Ninja’s great grandpa.

1979 brought about big changes for Kawasaki’s big bikes, from top to bottom, inside and out. Power was up once again, though displacement was actually down (to 998cc), and handling and braking were improved too. This generation has fully modern brakes, transistorized ignition, and forks and shocks that aren’t an embarrassment.

How good was the MKII KZ1000? Well, they were still making them for police use into the 21st century. If you are looking for a bargain in a traditional touring bike, head to the nearest jurisdiction in your area that had these and buy one at auction. Good used police bikes sell for about $2,000, and are one of the best all around used bike buys.

There are rare, more powerful versions of the KZ1000, but it really is hardly worth looking for them—that's how rare they are. First, there is the factory authorized, American Turbo-Pac built KZ1000 Z1-R Turbo. Various power figures are quoted from just over 100hp to nearly 150hp depending on boost. Good luck finding one—there are less than 500 as far as anyone figures. Oh, look, here's a drag raced out project that just ended on eBay with a $8,500 buy it now (not the one pictured below).

Then there is the oddball 1980 KZ1000 Z1 Classic, which was retro styled (to look like the bike from seven years ago), but had the future tech feature of electronic fuel injection, which boosted power to 96hp. The EFI system is not great, in fact, rumor is Kawasaki dealers were told to take it out and replace it with carbs back then if they couldn’t fix problems. It is rare these days to find one still running the EFI system, but there is one on eBay right now for $5,000. NADA says one should be about $1,500 in good condition.

There were also 1100cc variants from 1981 onward making more power, with better handling and brakes, and even shaft drive for touring. One of the best power and handling wise (and style) is the 1983 KZ1100R “Eddie Lawson Replica” with a Kerker header from the factory, and looks to match the one Eddie won the AMA championship on. They made just a bit more than 100hp. One all original ELR with low mileage just sold on eBay for over $10k! NADA says you can get one in good shape for about $3,000.

Much easier to find these days are the 1981-85 GPz1100, and in the Kawasaki family tree, the GPz would be the father of all Ninjas. These bikes also feature EFI, but from 1982 onward it's a more modern digital system instead of the analog/mechanical set up. In 1983, GPzs even got a monoshock rear suspension and a frame mounted fairing, setting the stage for the Ninja that came the following year. GPZ1100s, according to NADA, will run you $1,500 to $5,000 depending on condition.

There were also shaft driven bikes in various styles with slightly less power. The KZ1100ST had a similar look to the ELR, but without the headlight fairing. LTD bikes had the teardrop tank and cruiser styling, and the strange KZ1100 Spectre was even more cruisered out, but with some touring features like adjustable air shocks. Any of these should be available for $1,200 to $3,000 no matter which style.

So, if you're looking for a traditional Japanese air cooled four-cylinder as reliable as a modern bike, with plenty of power—any of these will do. The “World’s Fastest Production Bike” title went back and forth among the big four Japanese makers from 1970-1985, but Kawasaki was almost always the top, or just below. Oddly enough Kawasaki knocked their own bikes off the top rung in 1984 when they introduced the Ninja GPz900 with full fairing, four-valves per cylinder, and liquid cooling, but that is part two of the story.