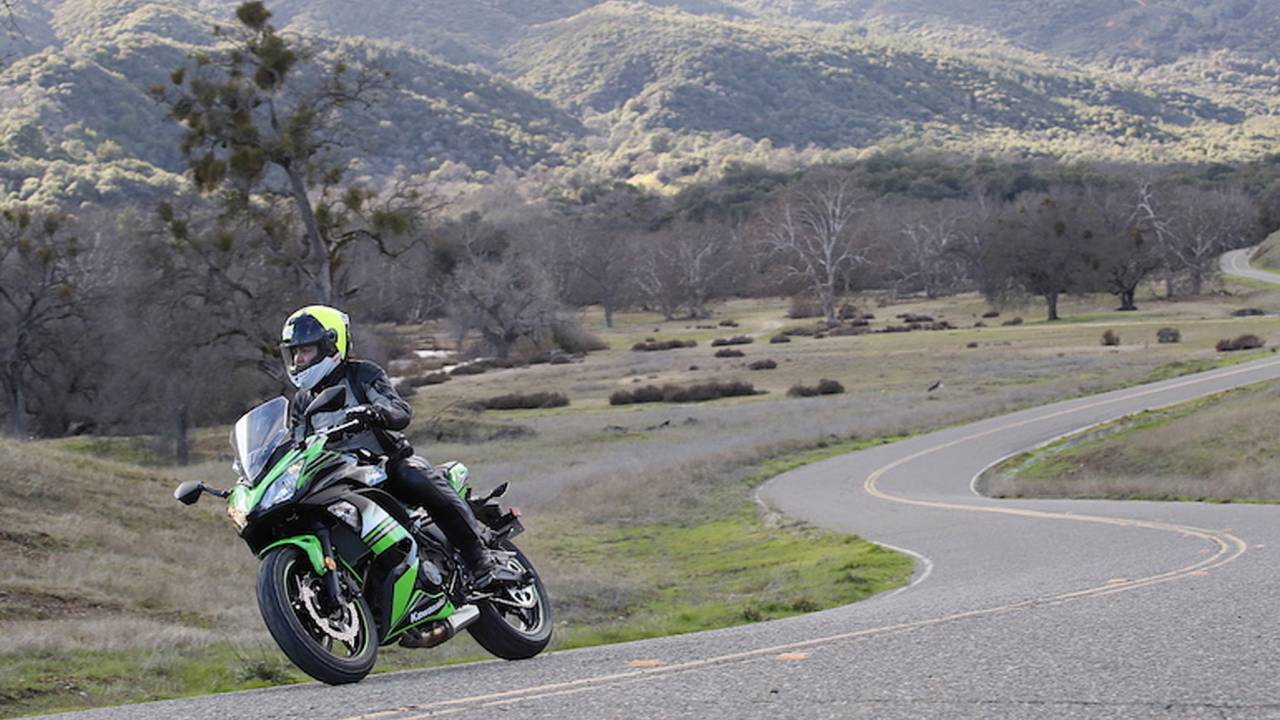 I’ve been on a naked streak lately, which is no surprise: it’s what I own. I sought out this type of bike because riding naked is more my style, so much so that I barely notice fully-faired sportbikes anymore. They don’t do it for me like they used to. In the past, I owned a fully-faired Japanese sportbike, and it’s not that I don’t like them—I just prefer their naked counterparts. However, Kawasaki has definitely made me think twice about my love for naked motos with its all-new 2017 Ninja 650.

And when I say “all-new” I don’t mean it in the marketing BS kind of way, where maybe one component is actually new from the previous years’ model. No—this entire bike did a 180 compared to its 2016 predecessor. Kawasaki pretty much gutted the thing down to its last bolt and started from scratch; everything on this bike has been upgraded to make it possibly the best Ninja 650 to date.

The 2017 Ninja 650 lost a total of 42 pounds. What kind of diet did Kawasaki put the 650 on to contribute to its more slender figure? It was a diet composed of primarily restructured components – everything from the wheel assembly to the chassis, swingarm, engine, fuel tank, fairings, etc. – were upgraded to produce a much lighter and better handling motorcycle. What you also get is a bike that looks nothing like last year's model.

Learning about the latest and greatest upgrades and features piqued my interest in this bike, and I looked forward to seeing how it performed compared to what I currently came to own, know, and love.

Despite only living 150 miles from Paso Robles (where the Ninja 650 press ride took place), I’d never before visited that area. On the drive down, I took in the scenic mountains that eventually made room for a vibrant, perfectly arched rainbow that graced the sky. California has, thankfully, been getting a ton of rain lately, and it just started drying up as I traveled down to what I consider a Napa  No. 2.

Paso Robles is spacious, and the roads are a motorist's dream: long and twisty. Kawasaki set up a 200-mile ride that was cut a bit short due to the conditions. The morning of the ride saw frigid temperatures, so much so we pushed back our departure by an hour so we could try to catch a bit more warmth. What's worse, I hadn't been able to find my winter gloves while packing, so I'd grabbed liners and my summer gloves and hoped for the best. This turned out to be a bad call on my part (more on that later).

The Kawasaki team warned us that the roads were riddled with icy patches, mud, dirt, and rocks. This ride was looking like it could get a bit hairy, but I figured it would be an opportunity to see how the Ninja 650 handled in less than ideal conditions. And sometimes bad conditions can really help a good bike to show its worth.

Easy on the Eyes

For a fully-faired sportbike, the Ninja 650 is easy on the eyes. It looks like its Ninja counterparts – like the 300 and the ZX-6 – showcasing a more aggressive, slender physique. Everything from the headlights to the cowl enhances its sporty appearance.

My favorite parts of this bike – esthetically, at least – are the front turn signals and the windscreen. The former is not anything new (probably one of the only not-new things on this bike), but something I never noticed on other Kawasakis. Most of my bikes come with, what I call "alien-arm" front turn signals; even my old sportbike and current race bike (Ninja 250) has/had them. So to me, it’s kind of neat to see how they are engineered flush to sportbikes.

The windscreen, however, is new to the 650, and it’s a three-way adjustable one! But there is a downside: you need an Allen wrench to adjust it, so it’s not something that can be quickly re-adjusted on the move. If this were my bike, I’d just keep it at its highest position since I like the least amount of wind hitting me. (Note: I installed a windscreen on my naked bike. I guess I just can't hang!).

In addition to needing tools you may want an extra pair of hands to help you while you adjust the height of the windscreen.

The instrument dash has also been completely revamped. It has the essential indicators on there: fuel gauge, gear, MPG, temperature, odometer, speedometer, trip meter, and a clock. Additionally, it has a “shift up” indicator light that flashes when you're nearing your set max RPM (it's customizable). When you're within 500rpm of your set engine speed, the tachometer needle changes from white to pink. However, if you exceed your set engine speed, the needle will turn red and the light will flash rapidly. I tested this out during the ride, and the indicator light started to blink when I was close to hitting redline. It's a neat feature and could be really useful for a track rider who wants to dial in his or her shift points at the track, e.g. it can help alert you to upshift coming out of a corner. (It might also be helpful to newbies who are still learning to use sound and feel to determine when to shift – Ed.)

One of the first things I noticed on this bike was the seat height: it’s 31.1 inches, which is 0.59 inches lower than the previous year's model. This is great for shorter folks, but Kawasaki says even taller ones can ride this bike if they pick up an ERGO-FIT Extended Reach seat, which adds an inch to the overall height.

I’m used to taller bikes and higher handlebars, so when I first got on the bike it was a bit awkward. I initially felt squished, which is odd since I’m not tall. I think it felt this way because I’m used to both a taller seat height and footpegs that aren't placed as far forward, so there was a lot more mental adjusting that needed to be done.

Once we took off, I found myself making little adjustments back and forth, and side to side, to see if I could find a suitable position. The good news is that as we progressed further on the ride, I started to get more acquainted and comfortable on the bike.

Getting out of first gear on this bike is a piece of cake due to the new assist and slipper clutch, which makes the clutch feel feather light. Once cruising, inputs made on this bike are super smooth – this is quite an attractive feature for new riders.

What I appreciated most about this bike was how effortless it was to ride. This is thanks to the upgraded suspension components. The 2017 Ninja 650 comes with new 41mm KYB front forks and a preload adjustable KYB horizontal back-link shock. On paper, there’s nothing spectacular about the hardware; however, Kawasaki did a great job tuning it. I was able to get good front end feel of the bike, and it handled marvelously over bumps and through the corners.

To add to the 650's easy and smooth handling are lighter five-spoke wheels dressed with a set of Dunlop Sportmax D214 tires, which performed well when we hit wet patches, dirt, debris, and so on. The bikes we rode were equipped with (new to the 650) Nissan calipers and a Bosch 9.1M ABS unit, which is a great available option. I had to brake hard a few times during the ride, and it sure is nice not to have the rear wheel lock up and slide.

It’s What’s on the Inside that Counts

I saved the best for last: this engine is hands down my favorite thing about the 2017 Ninja 650. The 649cc liquid cooled, parallel twin motor is what’s used in Kawasaki’s 650 American Flat Track bike, and it’s worth mentioning that both Kawasaki and rider Bryan Smith took home the No. 1 plate this past year.

As noted earlier, Kawasaki left no stone unturned when revamping the 650, so, of course, the engine got upgrades. A new open-deck aluminum die-cast cylinder helps make this engine much lighter, and the new plated, linerless cylinder bore gives the motor a narrower cylinder pitch, resulting in a smaller width.

This motor sounds great, and it’s tuned to produce smooth, mid-range. I absolutely loved getting on the throttle because the power wasn’t sudden, nor did it take time to accelerate – it was just right. To get this kind of power, the 650’s airbox was redesigned with a single hole, and a new slimmer intake port design helps boost the engine’s response and overall performance. Together with the suspension, ergonomics, and brakes, the 650 is a corner shark. It boosted my confidence while riding icy, debris-laden roads.

What’s also new on the Ninja 650 (but not new tech) is the Kawasaki Air Management System (KAMS), which is a patented radiator duct fan that redirects hot air to the ground; therefore, it keeps both you and the bike cool. Kawasaki also mentions that this system is “highly effective when stationary and during low-speed riding.”

The latter is great for folks that can’t take advantage of lane splitting and live in hot areas. However, for me on this particular day and time, I was dying for some heat. Remember earlier when I said I didn’t bring my winter gloves? Well, my hands got too cold during the first 15 minutes of the ride; I thought I would lose my fingers to hypothermia. I usually shove my hands along the side of the bike when they get cold, but on the 650 it wasn’t an option. This bike was as cool as can be, and my hands were begging for some relief. Thankfully Kawasaki's media relations supervisor, Brad Puetz, had an extra pair of warming gloves. I owe you, Brad!

The final thing worth mentioning is that this bike gets excellent gas mileage. I was able to get anywhere between 35-60 mpg depending on how much fun I was having. The Ninja 650 has a 4-gallon tank, so you can go quite a long distance before needing to fill up.

Kawasaki's goal was to make the 2017 Ninja 650 an easy, yet fun bike to ride, so it can appeal to every kind of rider: the beginner and the more experienced. And although this bike appeals more to folks who like fully-faired sportbikes, it’s definitely one that could tempt even the most hardcore naked bike lovers.