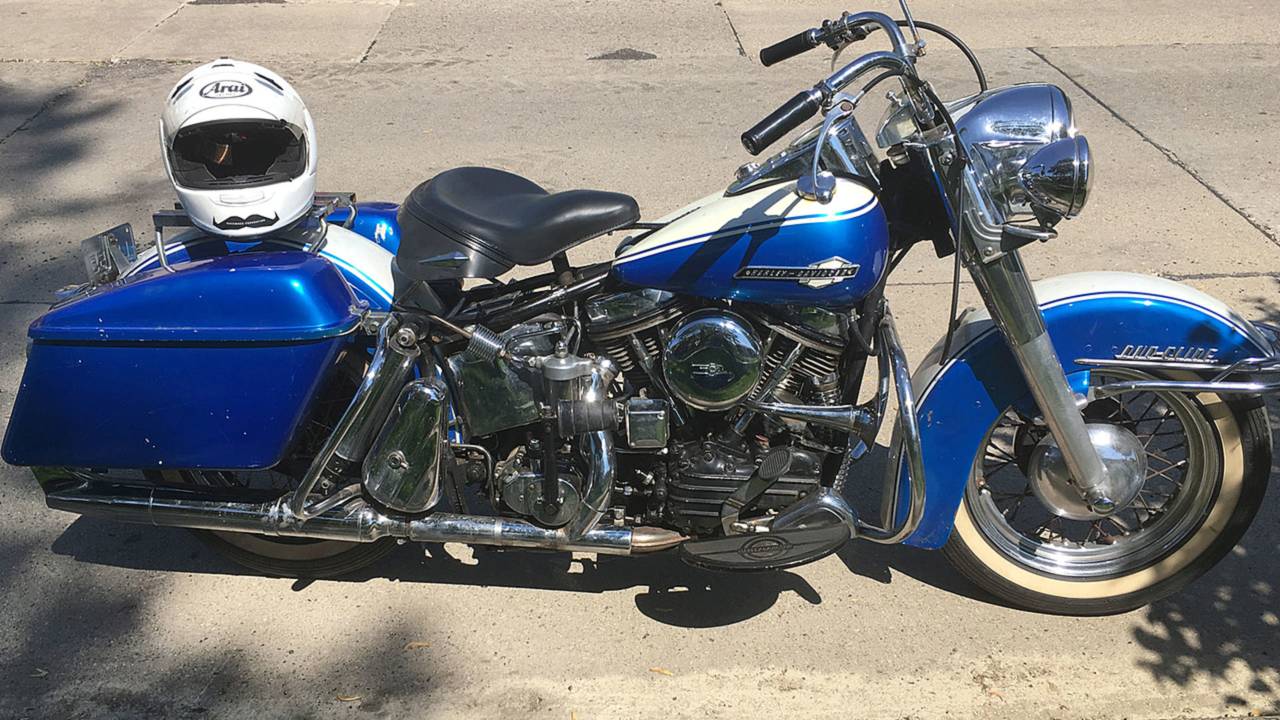 Motorcycles come and go in the repair shop. Some you bond with and miss them when they're gone. Handing a bike back to the owner is not a simple thing.

Some motorcycles get under your skin, stay with you after they are gone. Fixing a bike and handing it back to the owner is not as simple as it seems.

The story begins with my daughter Bea. Bea has a friend at middle school. One day, she told her friend, "My dad fixes motorcycles." I got a cold call from the parent, "Can you fix an old Harley."

"Yes, I can." a voice, not quite my own, slips out. This attitude is not good marketing, but paranoia flares, why is he calling me? There a dozen speciality H-D shops in Detroit. Some people do awful things to old Harleys, probably more so than any other brand. The man is still talking, I return to Earth and say, "can you text a photo?" He asks about my license, insurance, experience. Yes, I have those. I am a professional.

My phone pings when his photo shows up. It's sky blue with white highlights, a John F. Kennedy era Harley-Davidson FLH. It's also intact. Encouraged I add, "Yes, I'll be happy to look at it."

We meet over coffee before unloading the beast. It's a 1963 Duo-Glide FLH, from H-D's final run of Panheads and just before electric starting, it's the same age as me. An archaic machine, even in 1963. It needs help.

The man, whom I'll call Mark, is frustrated with two big, shiny shops who could not make peace with the old Panhead, he "spent considerable money" and in his own words, it's "horribly done."

My place is not shiny.

My place is a converted garage with room for about six bikes, two lifts, tools and clutter. There are nine bikes, average age of 50 years, lined up ahead, when Mark arrives.

He makes a decision and leaves a hefty sum in cash, to "help me get started." Whoa!

Disaster. The breather valve is glued shut. Why?

Mark is great person, we are friends instantly in spite of two large elephants in the room. First, the pile of cash. Do I touch it or wait till he leaves? Next, the bike? Can I fix it? Probably. Does he have the right attitude for a 55 year old motorcycle, hard to tell? The bike belonged to his brother, now gone. He has taken over care and feeding of the beast and wants to use it. It's over his considerable technical skill. It was nearly over mine too!

The pipes were wrong for this model and falling off, ignition timing was set somewhere between Pluto and Planet X, tires are flat and from the Ronald Reagan era, the chain, tight as a banjo string. It chimed B-flat when struck with a wrench. OK, that last part isn't true, but you get the idea. Paranoia returns, melancholia too, people do awful things to old Harleys, probably more so than any other brand. A shop did this work? A real shop? Mark breaks my trance with, "I know you're the right guy." He leaves. I pick up the money.

Work proceeds, Mark continues the super guy thing. These client relationships happen all the time in the Tiny Garage. I'm sad when a bike leaves, it means customers, now friends, will be out of contact for a while. There's a bit of loss, melancholy, mixed in with accomplishment, amid the nagging fear that I left the pistons out, or the master link clip. Every mechanic has those fears. It's why we read manuals.

This Panhead thoroughly challenged me. H-D's I get, but this one is different. The throttle does not snap shut by design. There is a device called the clutch booster or "Mousetrap." Google it, as description eludes me.

Close up of the stylish 1963 Pan. Extreme upper left is the "Mousetrap".

The Linkert carb was a mystery. The manual is written in Klingon. I dug deeper and found instructions written in 1926 for the "Schebler modern carburetor." It looked identical to the Linkert. I read the 92 year old paragraph and the advice worked.

This bike is going home. The emotions arrive, accomplishment, melancholy, fear. This one has gotten under my skin. I want to ride it some more. I want stay in touch with the owner. The garage will feel so empty without it.

Mark, on the other hand is overjoyed. I watch, and he can ride the beast far better than I. He mentions an MZ tucked away in the back of his garage. He has the old bike disease, MZ? We will certainly keep in touch.

The 55 year old Duo-Glide was once the best of its kind. I miss it, greatly. It's pure Americana, optimistic and bright. Archaic, yet competent if you get it. Mark is also pure Americana. The good kind of Americana. It's the right bike for him. I am very glad that we met. He rode off with smile. Next up, a 1974 Ducati. Time for a challenge.