Vintage motorcycles have a way of testing a rider’s mechanical abilities when they least expect it. Even with a strict maintenance schedule and proper preparation, there is still a chance that you might find yourself pushing your motorcycle down the side of the highway in the middle of the night.

Keeping these motorcycles roadworthy takes dedication, but for those who have caught the vintage “bug” there is nothing more satisfying than a successful adventure on old iron. Last autumn, my 1964 Duo-Glide put my skills and patience to the test on a trip from North Carolina all the way up to Concord, New Hampshire, to attend the Pewter Run. In the end, I completed the trip, but I had a number of “adventures” along the way…

The first day started normal enough, riding out from North Carolina on a sunny morning, headed for New York to meet some old friends before pushing on to New Hampshire. I had spent the previous week prepping my Duo-Glide for the trip and it was loaded and ready, with fresh fluids and a laundry list of adjustments carefully completed. With two days set aside for the first leg of my trip, I had plenty of time to cover the 600 miles to New York. A tent and sleeping bag were tied to the back of my panhead and I planned to spend the night somewhere in Pennsylvania. 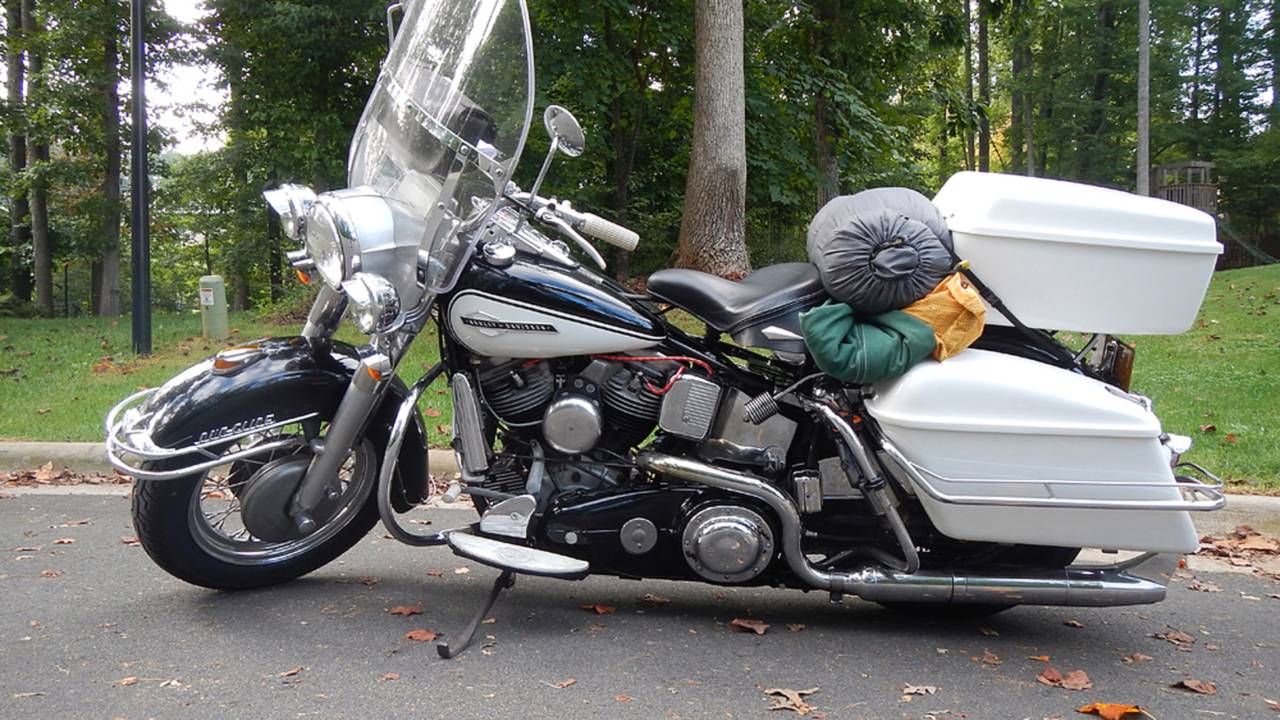 Ready to pull out with my hard bags packed to capacity and my camping gear strapped on the rear fender.

That plan held together fine for the first 75 miles of my trip, but soon after it completely fell apart. The first indication that this was not going to be an easy trip came when I hit the rear brake to slow down for a gas stop. The brake pedal went all the way to the floorboard and I ended up passing the gas station. The front brakes are already practically useless on my old panhead and now the rear ones were even worse. After pumping the pedal half a dozen times, the brakes would hold somewhat, so I decided to continue, telling myself that I would bleed the brakes when I stopped for the night.

Another 25 miles ticked by and a new problem popped up which could not be ignored. The engine started to rev up and the motorcycle began to slow down. I guessed my clutch must be getting loose, so I dropped down to 35 mph and limped into a gas station. Adjusting the clutch is pretty easy and I had it tightened up in less than 10 minutes. Confident that I fixed the problem I slammed down the kicker pedal to start the bike. Instead of the engine roaring to life, the pedal slipped and made a ripping noise as it completed its arc. There was nothing to do but pull the left side floorboard and primary cover. Inside I found a disaster. All the teeth on my primary belt were shredded off and piled in the bottom of the primary cover.  I was starting to have second thoughts about that belt “upgrade". 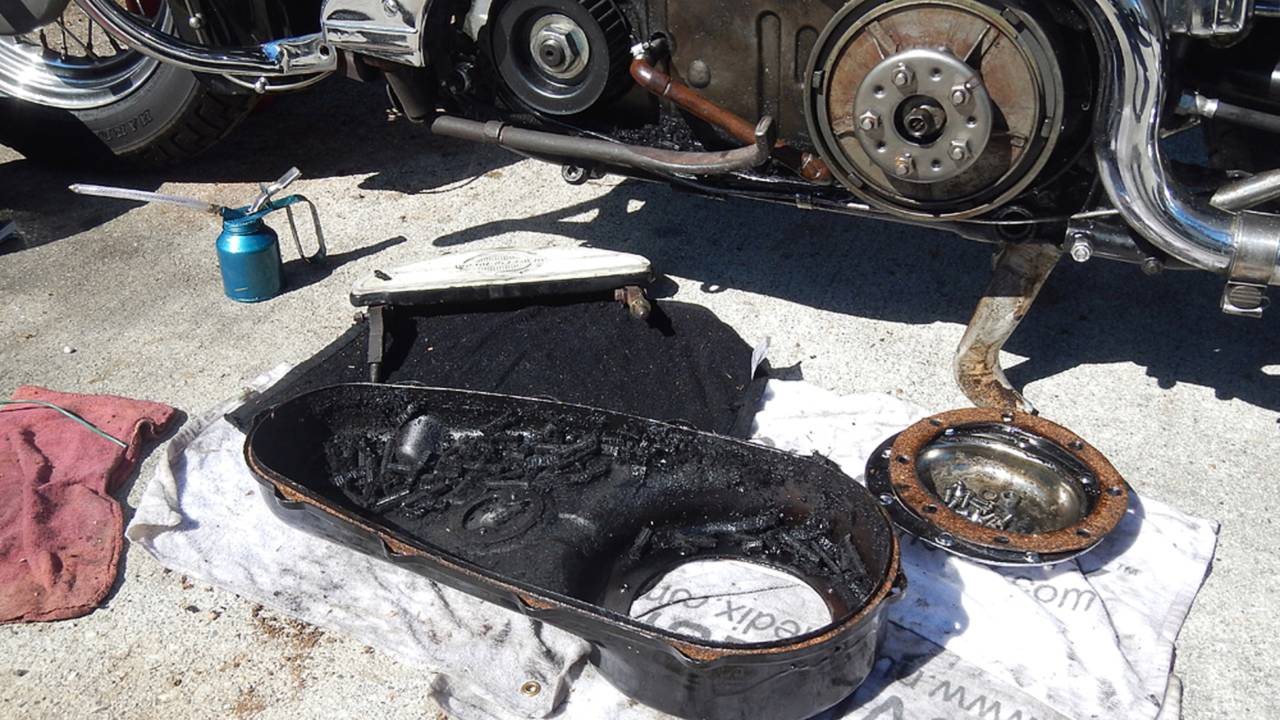 Primary chains don't mind a little heat and oil, primary belts, not so much...

Still, it was only 11am and I figured there must be a replacement belt somewhere nearby. I started making calls, searched the internet and put out a general plea for help. At one point I had six friends and fellow riders looking for that belt, but not one could be found within a 100-mile radius. By chance, there was a Harley dealership less than 10 miles from where I was, so I had them overnight a new belt. I passed the rest of the afternoon trying unsuccessfully to find a timing belt from the auto parts store that would get me at least a couple miles to a hotel and bleeding my rear brake.

Using an oil can filled with DOT 3, I reverse bled my rear brake.

After spending more than half a day at the gas station, the assistant manager agreed to let me leave my motorcycle in a well-lit spot and drove me to a nearby hotel. 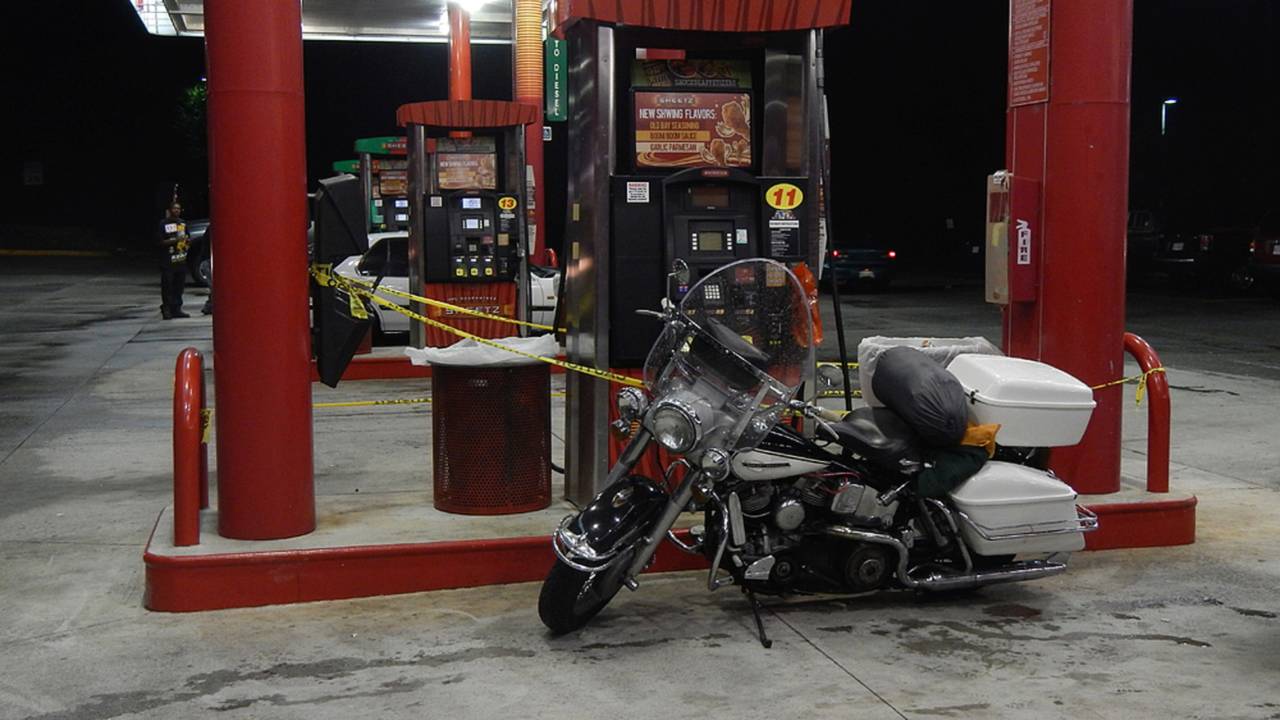 A broken pump made for a great "well lit" spot for overnight.

The next morning, I bummed a ride to the H-D dealership in Lynchburg and by 9am I was standing in their parts department waiting for UPS to arrive. An hour slowly ticked by and finally the brown truck pulled up and unloaded my belt. The dealership dropped me back off at my motorcycle and I barely let the driver stop before I bounded out of the truck and started unpacking my tools.

I looped the belt over the pulleys and right away it was obvious that I had made a big mistake. Turns out BDL makes two belt drive kits that will fit a ’64 Panhead and I ordered the wrong belt. Guess I should have counted all those teeth in the bottom of my primary cover. 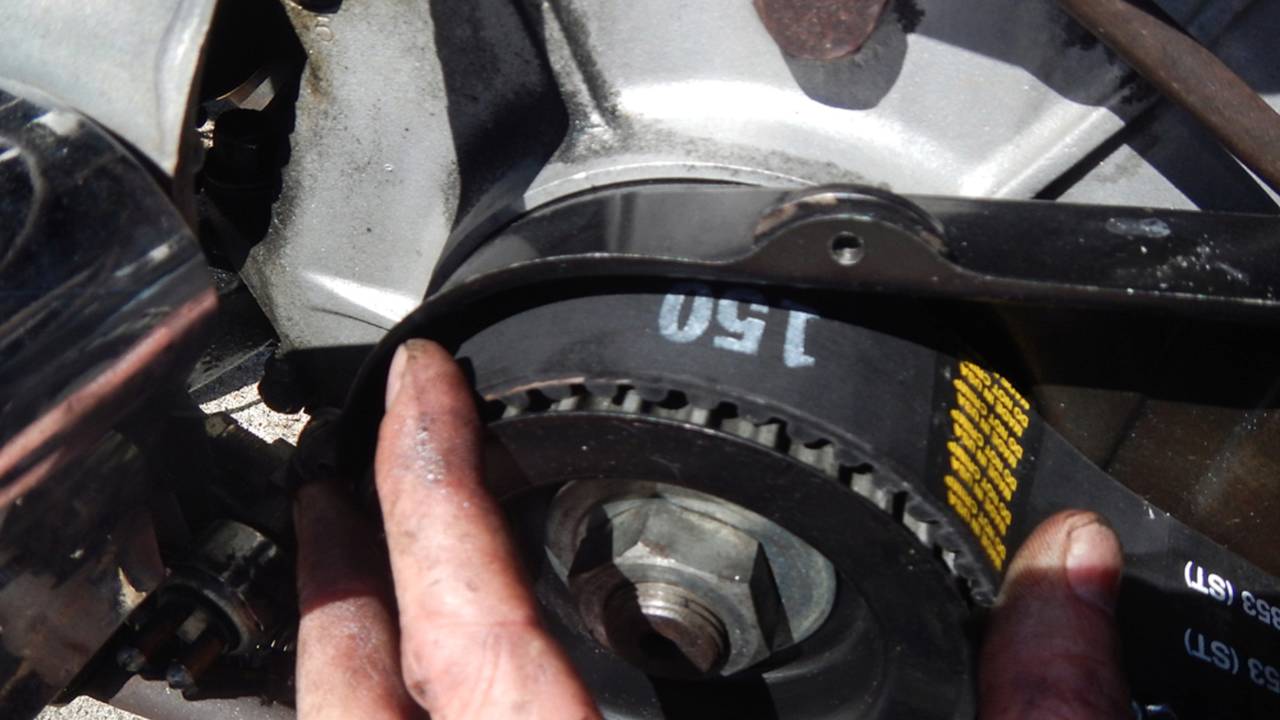 The number of teeth have to match between the belt and pulley, this belt is useless.

There was nothing left to do but go back and call everyone I had spoken with the previous day, this time asking for the correct belt size. The motorcycle gods must have been looking down on me because the correct belt was found at Departure Cycles in Richmond. Unfortunately, Richmond was about 120 miles east of my location and I needed to get on the road ASAP.

So, I called more friends, and friends of friends, trying to find someone who might be in Richmond and felt like driving two hours to Lynchburg. Turns out my friend, Sid, from Sid’s Cycles in Nashville knew some folks out in Richmond and gave them a call. Not long after I got off the phone with Sid, I got a call from a guy named Duane who said he would be glad to help. He agreed to leave work early, pick up the belt and deliver it. Three hours later, he pulled in to the gas station with his wife, Lisa, and handed me the belt. This time, it was the right one and I set to installing it.

With the correct belt installed and adjusted, I thanked Duane and Lisa and was finally back on the road, after spending about 30 hours stuck at the gas station. There was no way I was going to make the 500 miles to New York, but I figured I could at least get 200 to 300 covered by midnight. 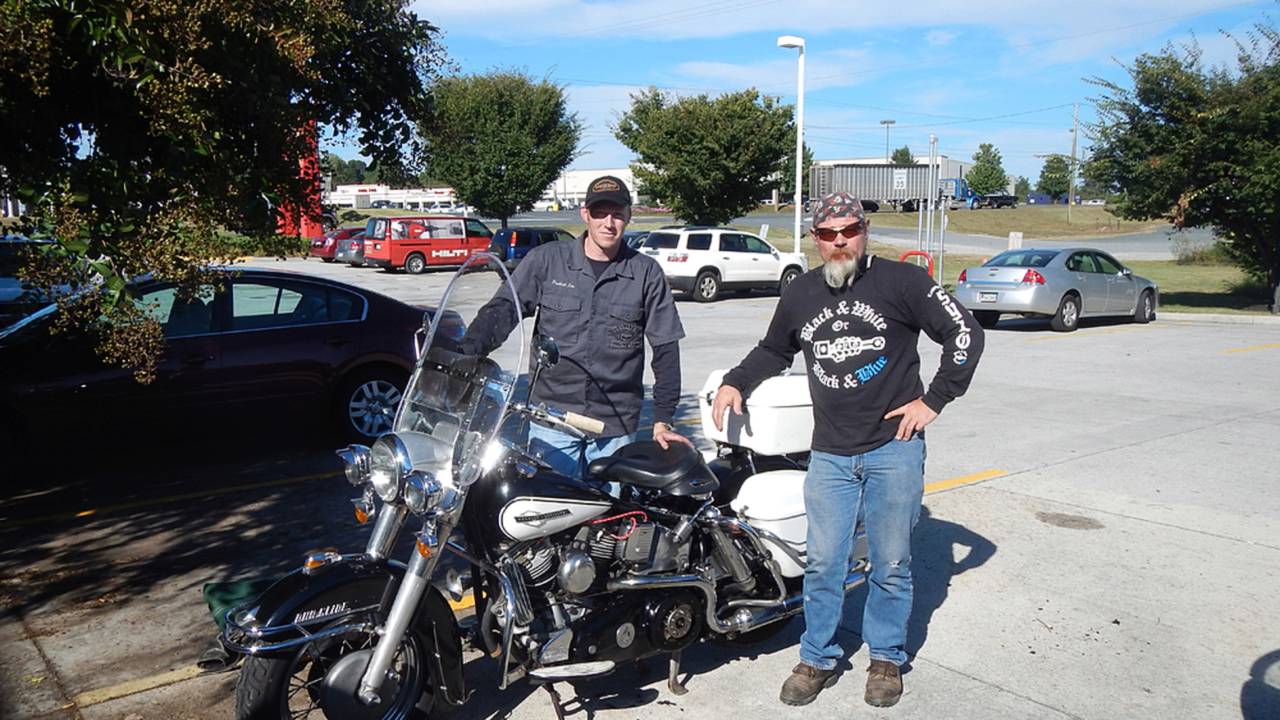 Duane drove over 200 miles to get me the right belt.

As the sun went down, I pulled off for gas in Strasburg, Virginia, feeling pretty good about how things were going. The motorcycle was running great and I was finally laying down some miles. That turned out to be a little premature as 40 miles later the engine was revving up and the motorcycle was slowing down again!  I couldn’t believe it, how could that new belt have broken already? This time I couldn’t even limp down the side of the road and just had to pull off on the shoulder to assess the problem.  I couldn’t ask for a worse place to get stuck: there I was on the side of the Interstate with trucks ripping past in the pitch dark.

Out came the flashlight and I checked the belt and the clutch. Both were fine, so I started the panhead back up and shifted the transmission into first gear. Nothing happened, the engine just revved and the bike didn’t move an inch. I shifted up to second gear, same results, but this time I could hear some noise coming from the rear tire. After a quick look I concluded that I had sheared off all the rivets holding my rear sprocket to the brake drum. There was definitely no way I could fix that on the side of the road, so out came the phone again and I made a call to Dave in Maryland.

Turned out that Dave was only about an hour and a half from my location and he was glad to come pick me up with his trailer. In the meantime I pushed my motorcycle a quarter mile down the road, up the on ramp, across the bypass and into the parking lot of another gas station. At least this one had a place to sit inside, so I passed the time reading motorcycle magazines.

Dave and his girlfriend arrived around 10pm and we loaded my motorcycle into the trailer and headed for his house.  Once there I unpacked all my bags and we got the motorcycle on his lift. 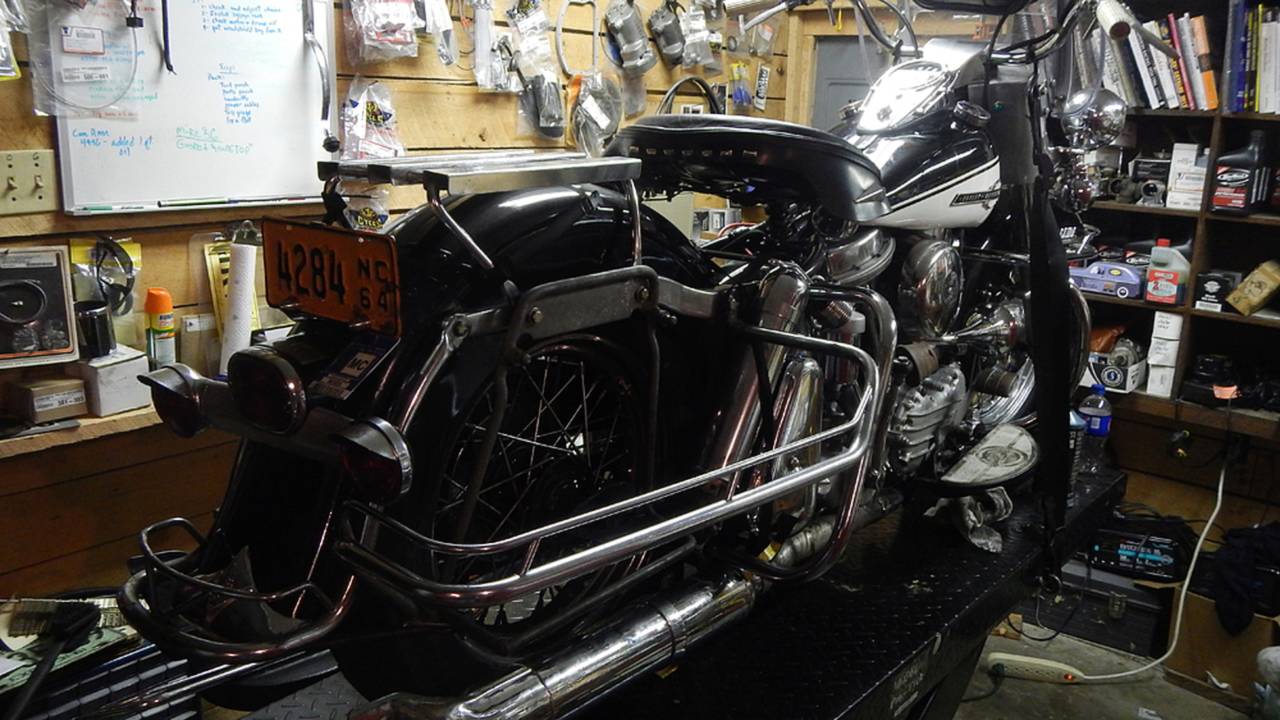 The best repairs start after midnight.

I started tearing down the rear end while Dave went to search for parts in his basement.  When I went to remove the lug nuts from my rear wheel, I found that they were all broken.  Turns out I hadn’t sheared off my rivets, but instead sheared off all my lug nuts! 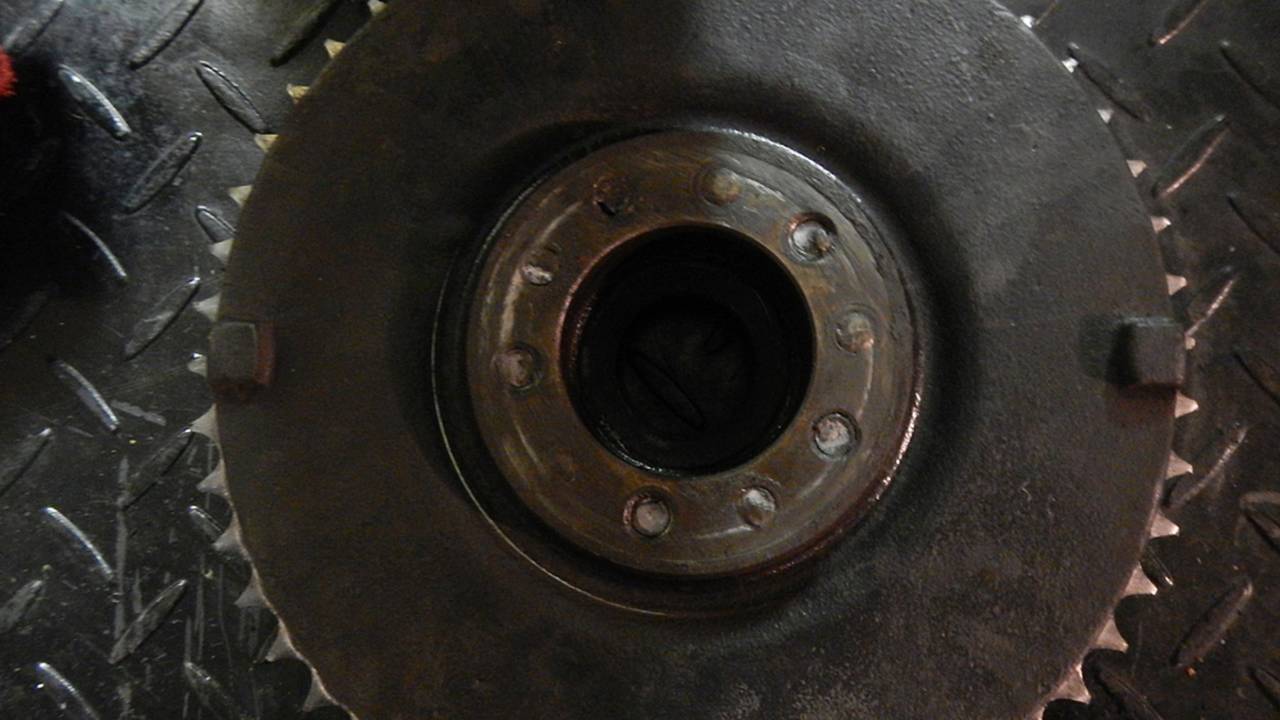 Dave had been successful in his basement hunt and returned with a complete rear brake hub.  We mounted the new hub and borrowed some lug nuts off the front wheel of his WL and I was back in business. We also rebuilt the rear master cylinder, bled the brakes and readjusted the rear chain. When we finally finished, it was 4am, so I decided I should probably get a few hours of sleep instead of just hoping back on the motorcycle.

Around 8am next morning, I took the motorcycle out for a quick test ride before repacking and thanking Dave for all his help.

Ready to roll out after a late night of wrenching.

To make sure I did not get lost, Dave led me out to the highway on his Panhead and within a couple of hours I was back on the Interstate heading for New York. Having lost more than a day’s worth of time hanging out at 24-hour gas stations, I barely got off the motorcycle for the next 400 miles. At gas stops I left the bike running as I filled the tanks, keeping the motorcycle upright to fill them right up to the top.

At about 5:30pm I pulled into Albany, New York, finally catching up with friends, albeit a day late. 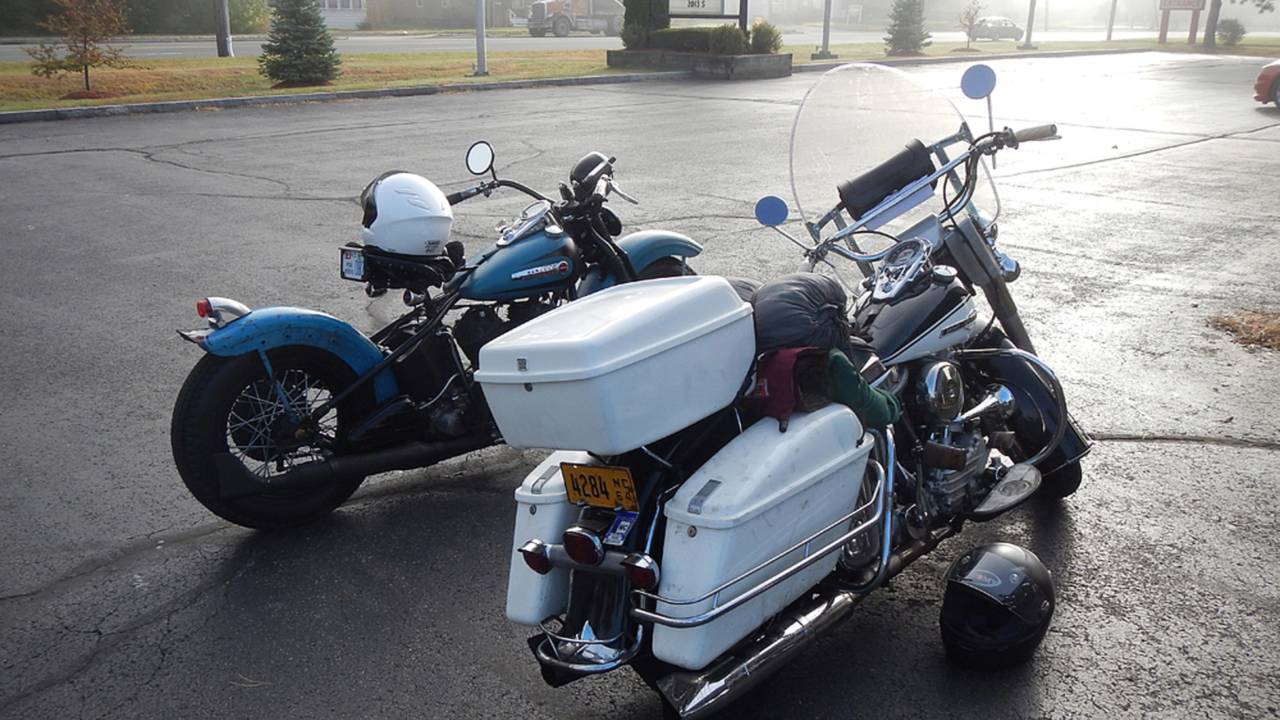 Made it to the "start" of the trip.