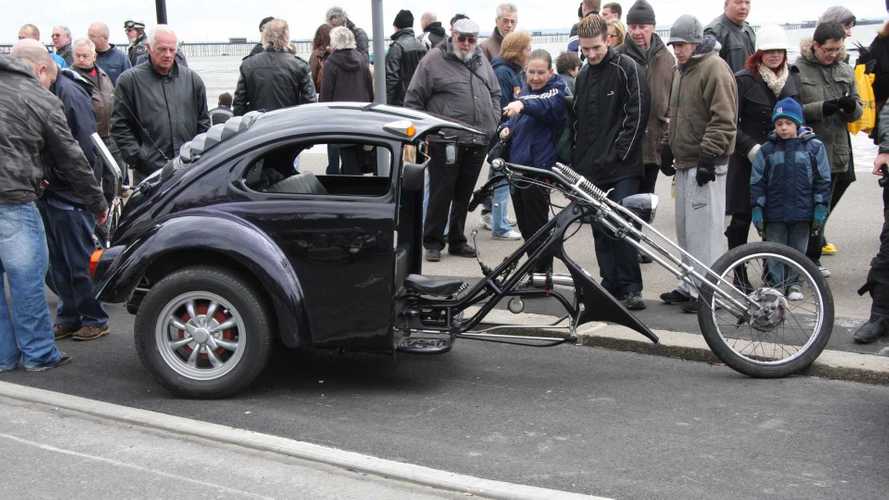 Motorcycles and cars are different vehicles for different purposes. Each is designed and built for its specific job. Sometimes, though, designers can't resist playing a game of "what if?" and shoving a car engine into a motorcycle. Why? Because they can.

Sometimes the results are amazing. Other times, it just makes you go "huh?" Here are five examples from either end of that spectrum.

The original Volkswagen Beetle was not a particularly fast car. Its rear-engine configuration, however, made it extremely easy to chop off the front half (or more) of the body, install handlebars and a front wheel, and make a custom trike out of it. Whether this truly qualifies as a motorcycle or not is questionable, but due to it meeting the legal definition of having less than four wheels, as well as being so popular back in their day, we're going to give it a pass.

These custom cruisers built around a General Motors V8 are probably the next most common car-powered bikes. What's not to love about a big ol' American V8? Plenty, actually. Don't get me wrong. They sound amazing and pack a big punch. They can also weigh as much as an entire motorcycle in and of themselves, too. The people who ride them don't care, though. If a big block 454 can make an old Chevy Nova stupid fast in a straight line, imagine what it can do for a bike.

If you prefer the Ford blue oval to the Chevy bow tie, don't worry. We have something for you, too. Not only does Dave Olson put a Ford V8 in a classically styled motorcycle, but he also uses the old flathead V8, an engine that served Ford well from 1932 to 1953. It was so powerful for its time that a certain Clyde Barrow, as in Bonnie and Clyde, wrote Ford a letter extolling the engine's virtues, informing them that Ford V8s were the only cars he stole. While the Boss Hoss features somewhat modern styling, Olson's stick with a look befitting the era from which their engines came.

We've covered this before so we won't dwell upon it here, but a list like this would not be complete without the Tomahawk, which is essentially the bare essential running gear slapped onto a giant Dodge Viper V10. It's truly insane. Although it has motorcycle controls and a motorcycle layout, it also has four wheels, so is it really a motorcycle? It never made it into production, so the world may never know. We also won't know if its claimed 420 mph top speed is remotely realistic.

What in the wide, wide world of sports is this? It looks like just another adventure bike, not some beast powered by a car engine. That's because the three-cylinder turbodiesel engine comes straight from the Smart ForTwo, of all cars. While diesel motorcycles are uncommon, they're not unheard of, either. It still boggles the mind to wonder who thought putting a Smart engine into a motorcycle was a good idea, though. Eva didn't sell too many of these, or last very long, either.

15 Years Ago, Dodge Gave Us The Tomahawk