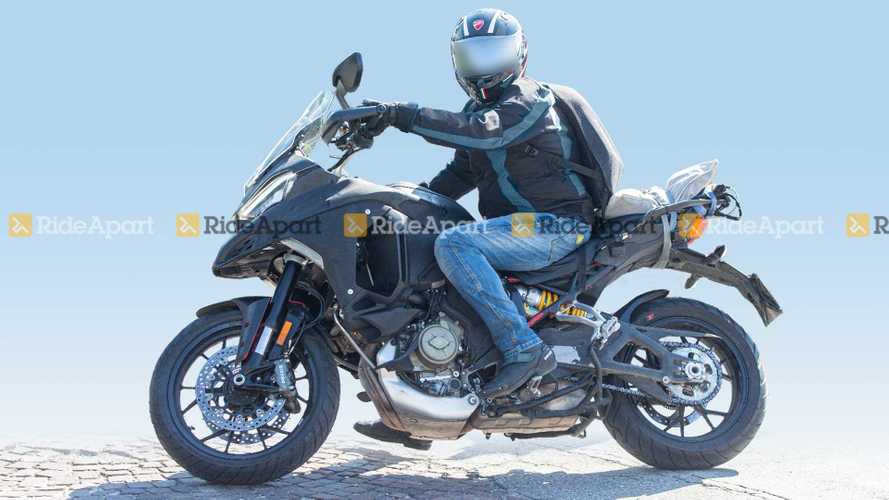 The new Multistrada V4 is back out on the streets.

Rumors of an upcoming Ducati Multistrada V4 have been making the rounds for well over a year. After several spottings in the wild, Ducati CEO Claudio Domenicali celebrated the production of the 100,000th Multistrada with a confirmation that a V4 version was in the works.

Ducati put its new adventure V4 back on the road for yet another round of testing and this time, it looks like the bike is just about ready for production.

I Spy With My Little Eye:

The spy shots show the new Multistrada stripped of its camo and probably as close to production as we’ll get to see it before its official launch. We notice that while undeniably Multistrada, the V4’s design receives a few subtle cues of its own.

The shape of the windscreen and the beak on the test mule is slightly different from the current 950 and 1260 while the semi-fairing features wide air intakes and exhausts on the flanks, on each side of the radiator. Also unique to the new model are the exposed trellis subframe and open, triangular swingarm.

Some components are carry-overs from the existing Multistradas including the wheels, similar to the 950’s y-spoke circles, as well as the yellow off-set rear shock with a piggyback reservoir. The headlight design, on the other hand, is obviously inspired by the V4s with the headlamp cluster crowned with an LED strip, giving the bike a “frowny” appearance.

Chances are the V4 will be an addition to the Multistrada lineup rather than a replacement. After all, the fully-overhauled Multistrada 1260 flagship was introduced only last year and the jump from a 950 to a 1,103 entry-level could prove detrimental. The sub-liter Multistrada 950 is more important than ever as the mid-size adventure segment continues to thrive and grow.

With most big motorcycle shows canceled for the rest of the year, it’s hard to tell in what context Ducati will launch the new model though to be fair, the manufacturer usually hosts its own lineup event. Seeing how the Multistrada V4 test mule looks launch-ready, it’s safe to assume that it should have its big moment sooner rather than later.